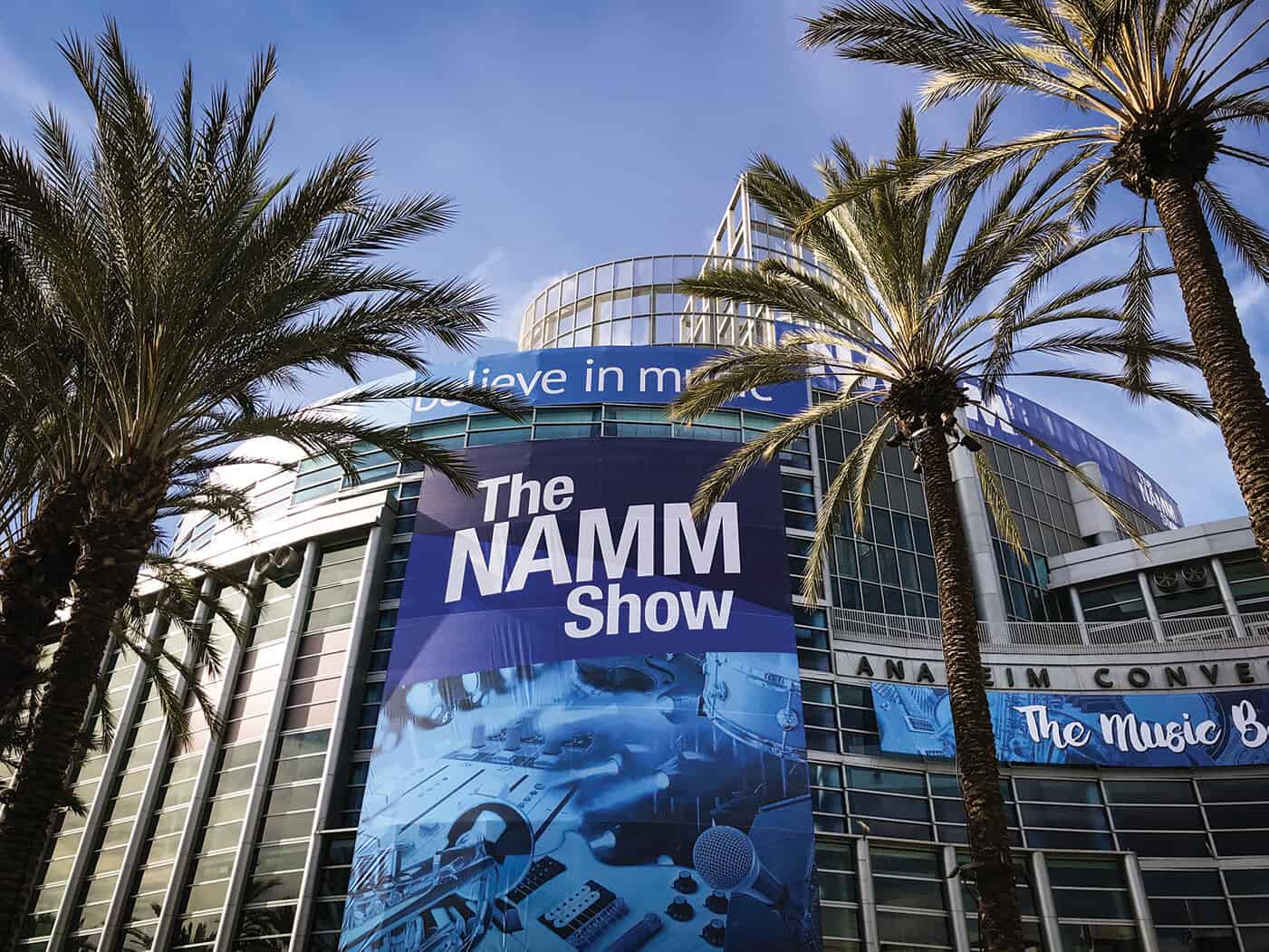 NAMM (or the National Association of Music Merchants) is a highlight in the calendar for any producer, musician or artist.

Showcasing some of the most exciting new products, not only is NAMM a great way to spend some of your hard earned cash on new toys but also keep up to date with whats new in the world of audio.

The event can attract around 100,000 attendees so understandably due to current Covid-19 restrictions, some changes had to be made in 2021. This year saw the event take on a new name – Believe In Music Week.

Of course, this does come with some disadvantages, the main being the inability to meet face to face with brands and try their products but one big bonus is the event is open until 28th February for registration.

Following on from the excellent products we spotted at NAMM 2020, Here are our top 15 picks of NAMM 2021.

are never ones to disappoint and we’re really excited to get our hands on the new Astral Destiny Octave Reverb pedal.

Housed in a super cool looking red and white stomp box, the pedal comes with eight editable presets, eight reverb settings and an assignable expression pedal allows you to tweak and experiment.

If you’re after a ‘straight up’ reverb pedal this may not be for your, but if you want to craft some experimental and crazy tones then you’ll be wanting this in your rig.

The reverb modes included are:

You’ll also notice a really cool ‘Stretch’ mode which allows you to double you reverb time at the simple push of a button whilst adding a pitch bending effect.

The unit retails at around $199. Check it out on Sweetwater for more information and audio examples.

Behringer have become quite well known for their newer product lines based on classic models and this is a theme they are carrying over to NAMM 2021.

The Mono Poly is based off the classic Korg Mono/Poly, a classic 80s synth which was a favourite among many artists and bands including Depeche Mode and modern artists still find themselves using the same units today.

Behringer’s model includes an all analogue signal path that mirrors the original with 4 VCO’s and flexible key modes for monophonic, duophonic and 4-voice polyphonic playstyles.

The unit has 37 semi weighted keys, velocity functionality and pitch and bend wheel and comes in at a retail value of $699.

Head to Sweetwater for more info.

The unit will most likely be favoured by hip-hop/trap artists or beat makers but the functionality of the unit is definitely impressive, essentially allowing the user the ability to create music without a computer.

The MV-1 includes Roland’s TR-REC step sequencer with and MPC style 4×4 grid. Songs can be created by writing individual sections which then get grouped together in song mode.

With dedicated tracks for drums (kick, snare, hi-hats and ‘overall’ drums), instrument and bass tracks to get you started, you’ll also be able to utilise Roland’s Zen-Core to access classic Roland sounds.

Vocals can also be recorded and processed using the built in mic or simply plug in your own (the unit contains it’s own phantom power).

The MV-1 will retail at around $699.99. For more information head to Sweetwater.

2021 marks a reintroduction for the Sequential Prophet-5 and -10, designed to coincide with Sequential’s founder Dave Smith’s 70th birthday.

Both the 5 and 10 are desktop models, featuring the classic sounds of the original models but shrunken down to a smaller model. The 5 will feature 5 voices whilst the 10 will feature (surprisingly!) 10.

One of the most unique features on both models is the ‘vintage’ option which allows users to essentially go back in time starting with the synths newer sonic qualities from the Prophet-5 Rev4 all the way to the less stable Prophet-5 Rev1 and the original factory sound set is included for added authenticity.

Other modern touches have been included such as velocity sensitivity and aftertouch as well as midi and USB connectivity.

Both come with headphone out, main outputs and direct monitor selections as well as USB/Direct Mono/Direct Stereo switch for monitoring mic, line or instrument inputs in stereo or mono. The Solo and Duo are both equipped with Crystal preamps.

You’ll also have included a copy of | First M-Audio Edition and MPC Beats as well as a mixing suite with 20 plug ins (and AVID Effects Collection) and if you’re a guitarist you’ll have a copy of Eleven Lite. Both versions also come with Xpand! 2 for synths,

The Solo offers one XLR or 1/4 inch input and retails at $49 whilst the Duo will offer two inputs, retailing at $69.

Head over to Sweetwater for more details, including how to pre-order.

Another reintroduction on our list, Audient have released new versions of arguably two of the best budget interfaces available – the iD4 and iD14 MKII.

Both are still aimed towards beginners and the budget end of the interface market but that doesn’t by any means they are compromising on quality.

The iD4 also has two line outputs, with the iD14 having 4. The former also incorporates one headphone out with the latter including two.

Both will include versions of Cubase LE and Cubasis LE, and several VSTi plug-ins.

Head to Sweetwater to check it out in more detail. 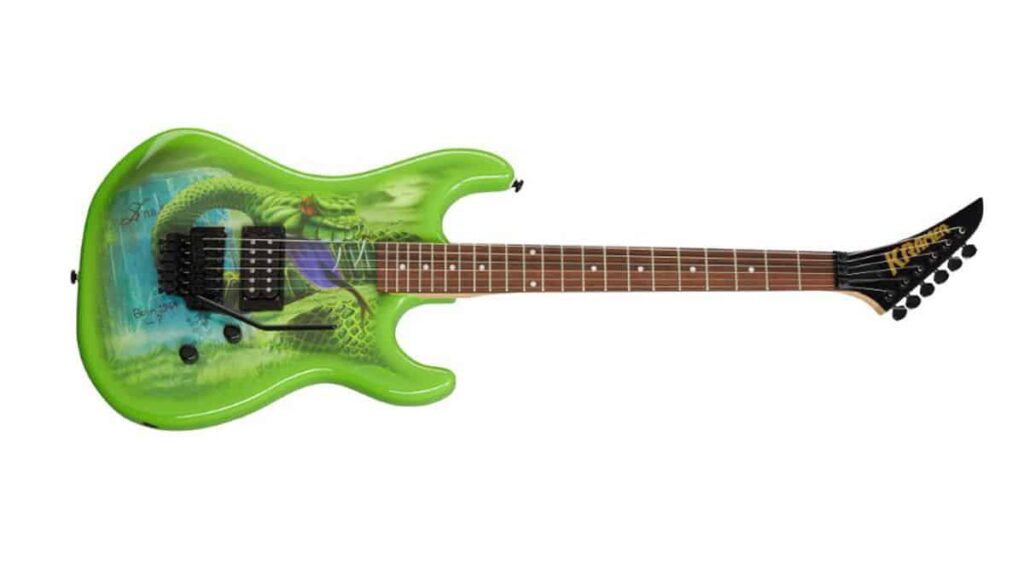 If you’re a guitarist and a fan of everything 80’s then the new Kramer Snake Sabo Baretta will be up your street! We love Kirk Hammet’s horror guitar designs so naturally are really into this cool signature model of Skid Row’s Snake Sabo.

OK so it might not be for everyone, the guitar certainly has a look about it and we have to take our hats off to Kramer for creating this beast in the 2020’s and that’s why this one makes our list.

The model comes with a set of Kramer 85-T humbuckers and Floyd Rose 1000 (perfect for dive-bombs!).

If the snake hasn’t scared you off, head over to Kramer’s site for more information. The Snake Sabo Baretta will retail at $949.

Imperative Audio have launched the ‘PVB’ – Portable Vocal Booth, designed to provide recording solutions perfect for those working at home or who may not have access to a treated studio space.

The cylindrical shape comes with acoustically treated internal walls that can be assembled and disassembled in a couple of minutes. With 5 retractable legs the booth is also handy as an iso booth for guitar amplifiers.

Easily collapsable and lightweight the booth is easy to transport or store.

Include are two LFO’s, ADSR envelopes and a 10 mode arpeggiator. 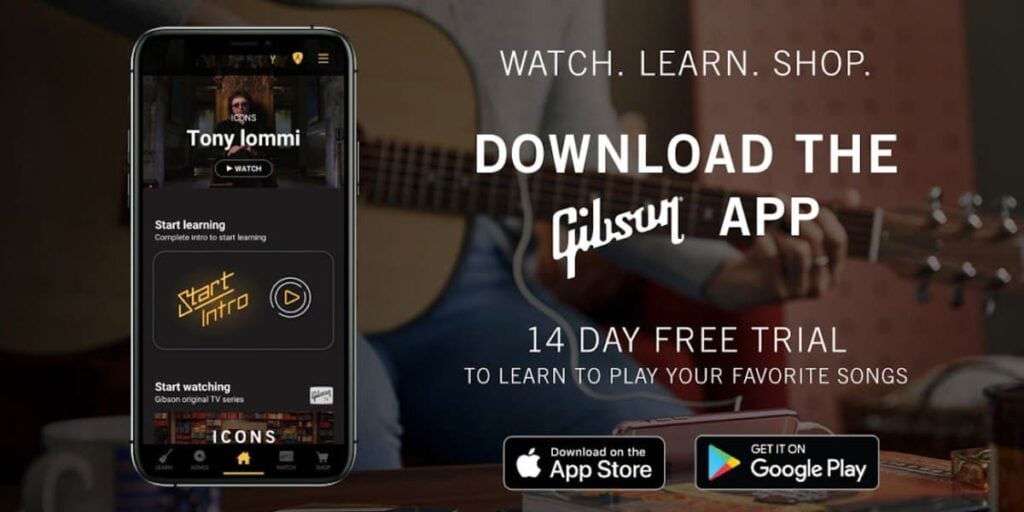 Gibson’s new smartphone app is aiming to provide music lessons via augmented reality from beginner through to advanced levels.

We’re seeing a lot of ingenious ways of making guitar playing more fun and Gibson are clearly keen to tap into this with the app that includes play along tabs and direct links to its virtual guitar technician service. This is a unique function which puts you directly in touch with a Gibson rep who can help you with basic tasks such as tuning and maintanence (the only issue being you need a Gibson, Epiphone, Kramer or Steinberger instrument to qualify).

The play along tabs offer songs from major artists from Foo Fighters to BB King and the augmented reality lessons respond and feedback in real time. All you need is a guitar and set of headphones!

The app is available for free from either iOS or Android store. 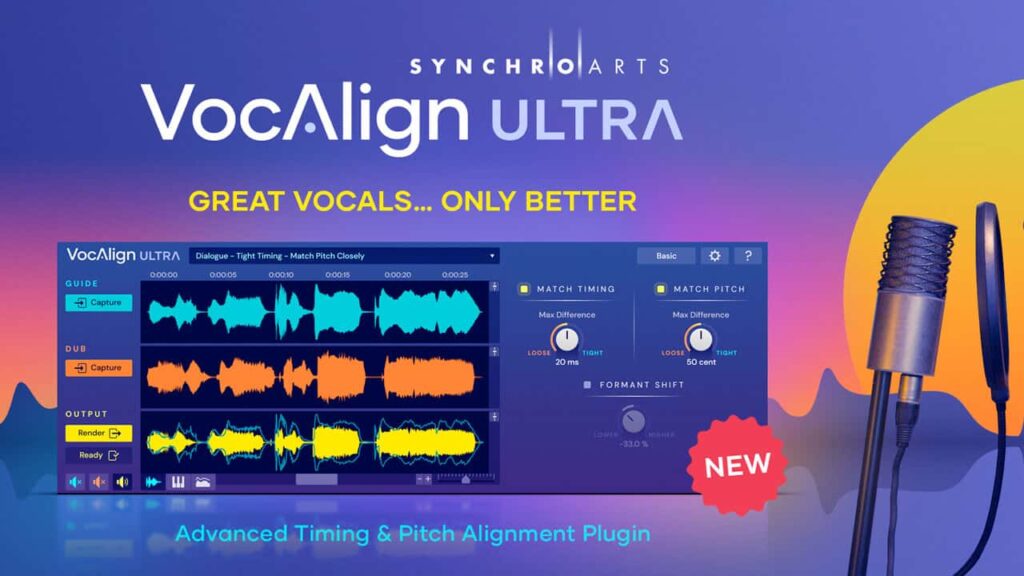 VocAlign Ultra is the newest version of Synchro Arts’ vocal align software, designed to let you sync together multiple vocal takes in less time than ever.

The software allows you to work on multiple vocal takes to seamlessly line them up during the editing process whilst also correcting pitch problems.

The tightness function allows you to lock in your vocal track stacks (or relax them for a move live feel, depending on the needs of your project).

Two new displays allow you to monitor and adjust pitch and timing separately and the software comes with 60 presets to get you started.

Mackie have added to their already successful line of Onyx mixers with the new 8, 12, 16 and 24 models (each named after the amount of tracks they can record).

On each unit are a series of high quality preamps providing up to 60dB of gain, recording at 24 bit and 92kHz. USB connectivity means you can record straight to your computer or alternatively the SD card compatibility means you can record without the need for a DAW or computer/laptop. There is also an option to connect via bluetooth to stream audio directly to the mixer’s channels.

You’ll find a 3 band Perkins EQ on each channel also, based on similar EQs found on British desks in the 60s and 70s, and Studio Command will allow you to control in built effects such as chorus, reverb, delay and other multi effects. First, Mackie’s Musician Collection (including 23 plug ins), Waveform OEM, and the DAW essentials collection are all included.

The Space Rip is a synth based effects unit that makes your guitar sound more like an analogue synth than a stringed instrument. Included are a Sub and Octave knob for added thickness, and we’re told Pigtronix have spent a lot of time and effort calibrating the tracking to ensure a smooth response.

The Constellator is compact pedal that squeezes a wealth of delay sounds into its tiny casing. It features Time, Mix, Mod and Repeat controls as well as a Feel switch to alternate between a chorus and vibrato effect.

Finally the Moon Pool describes itself as a ‘Tremvelope Phaser’ so you can imagine some of the experimental modulation tones it creates.

There are controls for Phase Speed, Trem Speed, Depth and Sensitivity whilst you get three mini switches for each effect including Dynamics and Phase.

Whilst there is no official release date for the pedals yet, you can find out more at Pigtronix’s website.

All units are expected to be priced at $179. 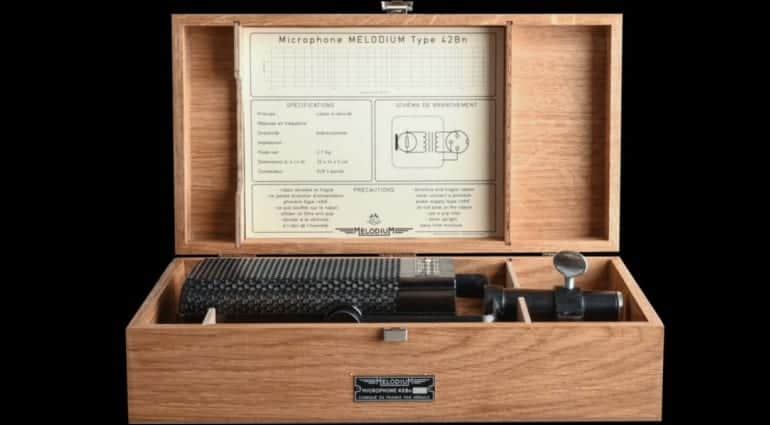 The new model is faithful to the original and is built to a similar size but does offer an improved custom-wound transformer, higher output impedance and an XLR output to fit with modern recording standards.

The microphone is hand built and ships in a really cool hand made wooden box. As you can imagine the microphone is on the pricey side, at EUR 2,520 (including VAT) however we feel this price is more than justified considering the work that has gone into recreating this classic mic.

For more information head to Melodium. 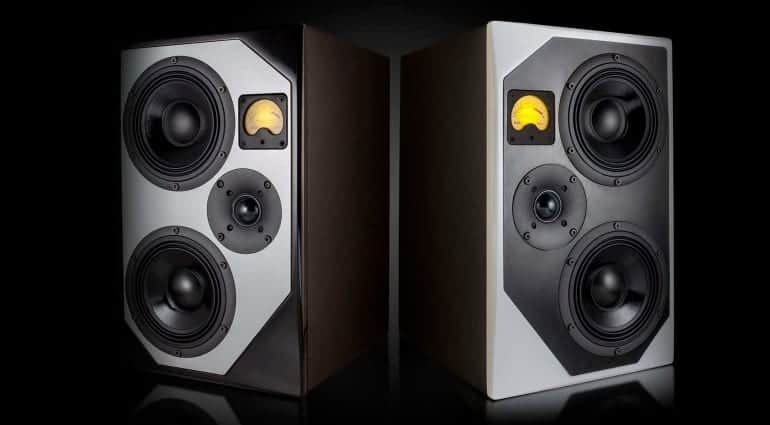 Ashdown aren’t a brand you would typically associate with studio monitors, you’re more likely to know them for their line of bass amplifiers. However they are keen to break the mould with their NF-1 and NF-2 studio monitors.

The two products are aimed at small to medium sized studios. The NF-1 includes one 5 inch woofer with the NF-2 incorporating 2 with both having a slight roll off at 20kHZ to avoid piercing high frequencies.

Both also have dual 120 watt Class A/B amplifiers with subsonic filters and optical compressor circuits to protect the speakers from any nasty peaks.

The design reference actually comes from the BBC LS3/5 broadcast monitor, a favourite of many audiophiles, so you may find they look and sound familiar.

Pre orders are available however a specific release date isn’t available at present. The NF-1 is priced at GBP 999 and the NF-2 at GBP 1,199 and both are available in Black/White and Black/Oxidized.