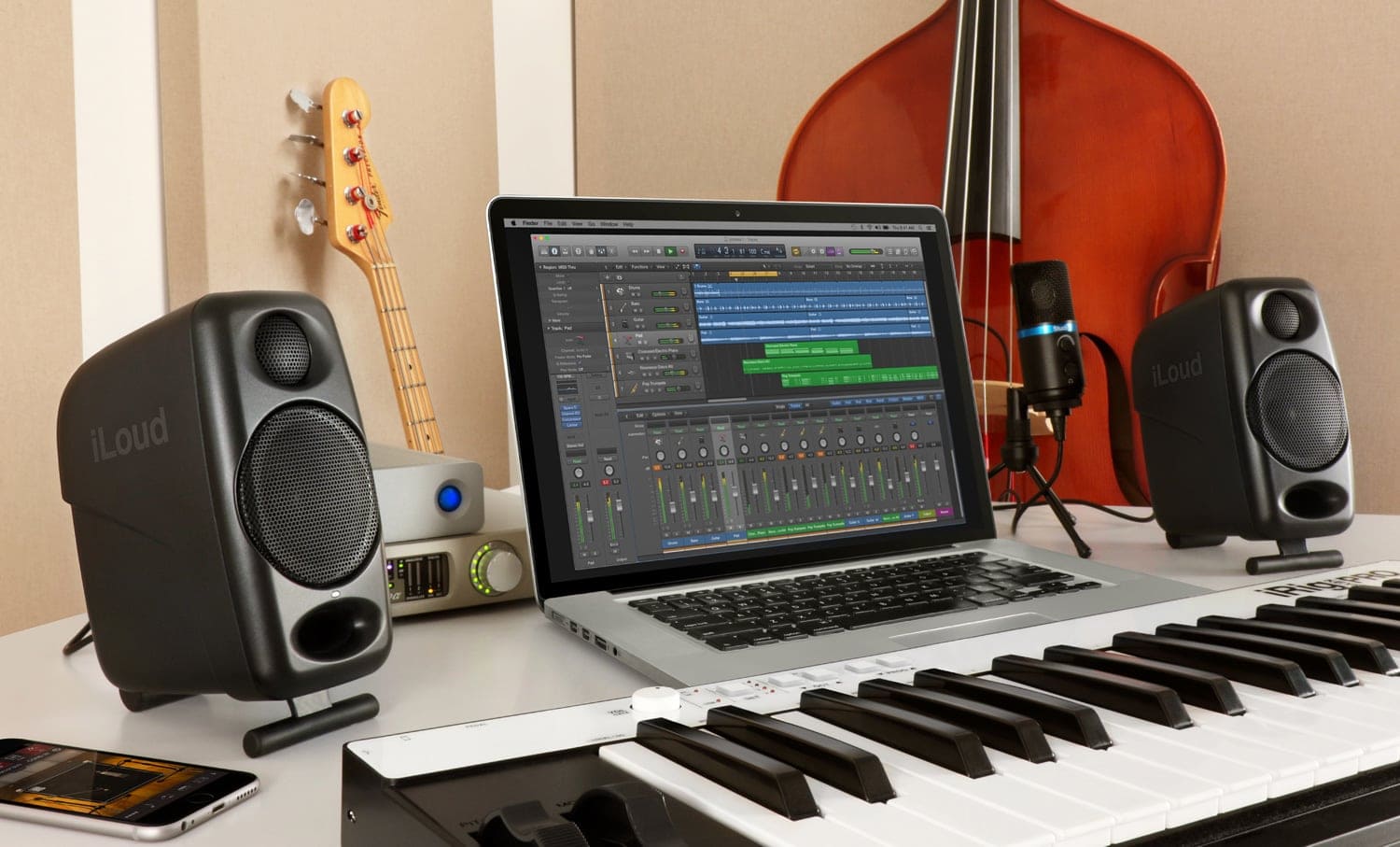 IK Multimedia iLoud Micro Monitor Review
VERDICT
A sleek, compact, and affordable solution to your studio speaker needs, the IK Multimedia iLoud Micro is the perfect marriage between quality and value that is hard to pass up.
Sound Quality
8
Build Quality
7
Value For Money
9
PROS
The perfect marriage between quality and value
Deliver clean and crisp sound in a small package
Offers reference-quality audio at a superb price
CONS
RCA cables are not the most durable or universal
Not the most attractive monitor in the world
8
OUR SCORE
READ REVIEWS
Guitar CenterSweetwater

There are a LOT of studio monitors out there in the world, and it’s easy to end up down the monitor rabbit hole, looking at speakers that are $500 each and beginning to question your very existence.

“Is it really any better than my headphones to mix?”, “Does my home studio have enough space to make use of high fidelity monitors?”, and “Which kidney do I have to sell so I can make a good mix?” are all questions that arise far too often.

And while putting a kidney up on eBay is a commendable approach, there is another way.

Enter the iLoud Micros from IK Multimedia, which offers a sleek, compact solution that is also very affordable.

For this reason, it’s hard not to raise an eyebrow at the prospect of considering purchasing a pair.

So does it live up to the often sought-after marriage of quality and value? Let’s have a look. Based on my evaluation, IK Multimedia’s iLoud Micro absolutely delivers on sound quality and value.

At $350 a pair, it easily surpasses comparable products in his price range, and truly gives the bigger names a run for their money.

The iLoud seems tailor-made for the home musician or apartment studio type that wants an entry to intermediate level monitor to work on their music productions.

But still be small and compact enough for home use, though they are certainly capable of ruining your neighbor’s afternoon if you really push them!

For the size, it really is impressive how much the bass can punch without sounding too muddy, it’s seriously punching way above its weight here.

It’s clean, clear, and really pushes some air. It’s been noted to have a balanced bass frequency response to the 50Hz range. Something not generally possible with studio monitors so compact.

I would’ve expected the housing to shake loose, but no, it stays put and sounds powerful. The front-mounted bass ports are also a nice touch as having them close to a wall doesn’t really color the sound the way a rear-mounted one would.

The mids and highs are crisp and clear, and there’s a ton of nice, clean headroom here to provide a good range to work with.

So long as you aren’t pushing it into the 90dB range, the sound is very transparent.

It’s worth noting that there is an internal DSP limiter for the bass that kicks in at high levels which prevents the driver from peaking. This keeps the bass on a nice leash, but does color the sound a bit at the highest volume levels.

IK was also kind enough to also add some -3dB settings on the rear for adjusting low and high frequencies, as well as two predetermined settings for either the desk (upright) or flat (laying on its side) orientations.

The low frequency -3dB switch cuts out some bass and allows more of the mid and high frequencies to shine without being overtaken by the bass at low volume settings.

I found the high-frequency -3dB switch to cut out too much of the treble for my tastes. But depending on your room setup, I’m sure it’s useful in some settings.

That’s not to say the sound doesn’t have its quirks, such as the DSP limiter I mentioned, and some users have mentioned the mids and highs may be fatiguing after some time.

As with all monitors, there is something to be said about analytical specs, but in the end, it does come down to what you hear.

The reality is I can’t say I’d be using them over high-end, robust, studio monitors in any true professional audio or music production setting. But if you’re looking for superb sound in a small footprint that you can travel with for your music production adventures, look no further.

The sound generated with the IK Multimedia iLoud Micro Monitor will impress anyone, and not just because of the novelty of a big sound coming from a small footprint. They really do sound great.

At $350 for a pair, I don’t think anyone is expecting anything other than a plastic build, and you’re not wrong. However, it does feel nice and sturdy.

As I mentioned the great bass response earlier, this can only be achieved with the very sturdy housing and enough weight to keep the speakers from vibrating right off your stand or desk.

While the appearance really takes my millennial bones back to the late 90s era computer speakers, the build quality is top-notch.

The housing feels dense and solid, and the speakers have some decent weight for the size.

Part of the charm of the iLoud micro is its size and potential for portability.

They feel rugged and don’t give me the impression that I’d be knocking anything loose by carrying them around for a quick jam or studio session on the go.

Nor would I worry about packing them away in a backpack or suitcase for travel.

The matte finish is nice to the touch and also adds to the feel of a quality product with some real thought put into the design and aesthetic.

There’s also a sleek white version if the black ones do not fit your studio design. However, there is also a way too thick 4-pin cable to connect the two speakers that are included.

It is overkill for passing sound to another speaker, but I appreciate the intent. Maybe it’s meant to contrast against the small size and legitimize the big sound.

Not the most attractive monitor in the world, but you will not have to worry about build quality in the slightest.

The rear panel uses RCA for the inputs and a 1/8″ stereo jack for output. Not necessarily a deal-breaker, but RCA cables are not the most durable or universal. Perhaps it was to save on size, but it’s a bit of a miss for me.

If you’re using an interface that only has 1/4” TRS outputs, you’re going to need to source an adapter.

I don’t know exactly what a perfect score would look like here, but I’m giving it as close as I can.

If you’re a musician, chances are you’re not exactly rubbing elbows with Elon Musk, so the value is key when making purchases to enhance your audio production abilities. Here is where the iLoud Micro shines.

Not only are the iLouds affordable, but they really deliver on their lofty claims of being the “the smallest active studio monitor reference speakers in the world”.

I’m usually skeptical of such marketing tactics, but in the end, I find it hard to argue with.

I don’t think I’d use anything smaller for reference, yet despite the size, it really delivers on sound.

Not everyone can have their rooms treated and outlined for the best bass response. With the iLouds, even if you’re not a huge audiophile, you will get a lot of clarity and transparency from these speakers.

Another really nice addition is the Bluetooth connectivity. Stream your favorite music through iLoud and listen for the new subtleties you may not have heard on lesser multimedia speakers.

I don’t really have much here regarding value because I think it really is great in that metric, but if I were to gripe it would be that, while they can be quite loud, the limiting DSP and general limitation of 3-inch drivers and 3/4 inch tweeters will not be filling a larger studio or outdoor setting.

So while it’s not necessarily going to excel in every scenario, when it comes to smaller, home-based studios, I really like these as a value pick.

If you’ve gotten this far, I’m sure you know where I stand.

The IK Multimedia iLoud Micro is the perfect marriage between quality and value that is hard to pass up.

As someone who has worked in small studios for a long time, having a giant monitor that costs about as much as your monthly rent per side is not always ideal.

The iLoud delivers a clean sound in a small package, at a great price. Really hard to pass up.

Give these a go if these use cases hit home for you. you’d be hard-pressed to find a better bang for your buck in the monitor department.

How do I connect my iLoud Micro to an audio interface?

Many budget interface such as the Mackie Artist will only have 1/4” TRS outputs, but with these monitors only have 1/8” TRS inputs you’ll also need 2x male 1/4” to 1/8” adapters (they’re only a few bucks though).

How do these compare to the iLoud MTM?

In short, the MTMs are larger, more robust in sound, powered, and feature automatic room calibration using the included ARC mic for a great price as well.

But there’s a bit of a price bump, so budget allowing they are definitely worth checking out too!