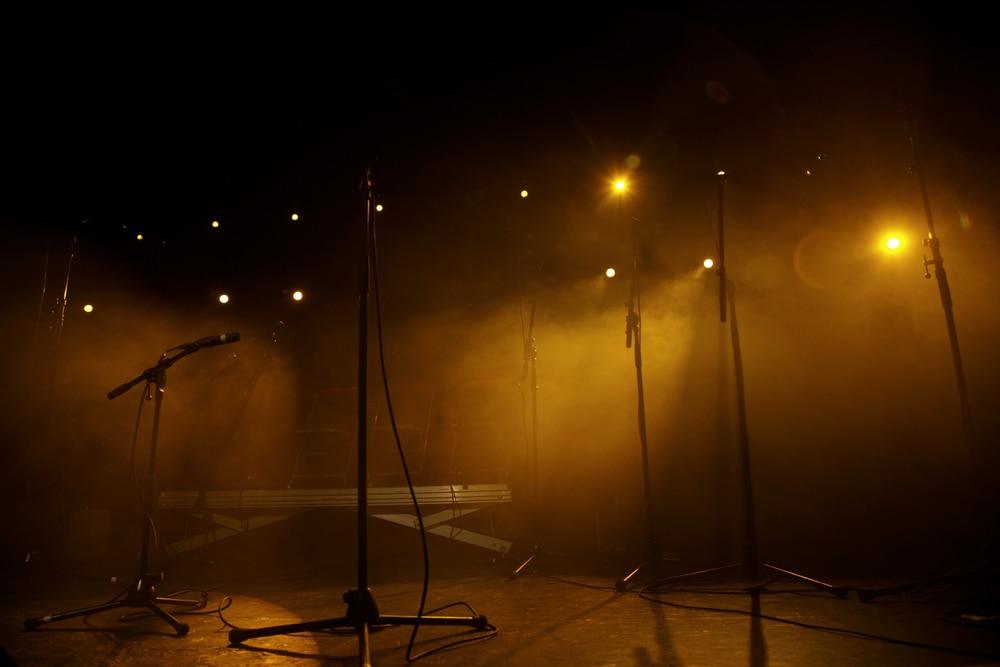 How A Recession Could Affect The Music Industry (In 2022 & Beyond)

What A Recession Could Look Like For The Music Industry

With gas prices skyrocketing alongside just about everything else money can be spent on, people in all walks of life feel the effects of inflation, supply chain shortages, and other economic shifts. In the summer of 2022, a worldwide recession, at the time of writing, seems almost inevitable.

While we maintain that music will never die, unfortunately, the music industry is far from recession-proof, and artists, producers, and other entertainment professionals all feel it in one way or another.

Recording in a Recession

Before we launch into any high-level economic speculations such as whether or not Garth Brooks will be able to afford another million-dollar mansion, let’s look at how a recession could affect everyday people like you and me.

Over two years since the spicy flu made its debut on the scene and people everywhere found the time to lean into their creative hobbies in an effort to stay sane, the demand for musical instruments has remained strong in the 2020s. This is expected to continue to rise in 2022.

Compared to the last economic recession when guitar sales were at an all-time low in 2009, the music may just live on through any market downturn in 2022.

However, supply chain shortages affect public access to instruments, amplifiers, and gear at every level.

From independent music stores to global equipment manufacturers and record producers, bottlenecks and delays in plastics, vinyl, and other materials are causing supplies to dwindle, timelines to shift, and prices to rise worldwide.

So while demand for musical instruments isn’t waning, physical backlogs and 600% international shipping price hikes prevent business from being conducted as usual.

In response, retailers like Sweetwater are getting ahead of the demand and preparing for the end of the year months before their typical business cycle.

So whether you were hoping to upgrade your home recording studio or secure a first edition copy of your favorite band’s new vinyl record, you may end up waiting longer or paying more than initially anticipated.

Although some people are blaming Adele for the delays, the reality is that the music industry itself is a massive juggernaut that will continue its path forward with the strength to bear a recession.

So long as artists continue to inspire other artists, demand for the material possessions that make music possible will never cease to exist.

For the time being, however, you may want to just “work with what you have,” and perhaps use that money you have set aside for a new guitar to fill up your gas tank or put food on the table.

Streaming during the “Attention Recession”

Of course, even when massive amounts of music are being produced and released into the world, modern musicians may struggle to make ends meet without a built-in audience, now more than ever.

As thousands of encores have always been preceded with sentiments such as, “we couldn’t do this without you guys,” anyone looking to make a living as a musician in 2022 and beyond may be the victim of what some call the “Attention Recession.”

Putting economics aside for a moment, in the wake of extensive pandemic lockdowns, people are now finding themselves with less time on their hands than in previous years, and thus less attention for things beyond the day-to-day.

In 2020, Americans spent an average of 10 waking hours at home each day, even canceling vacations due to travel restrictions.

With more time now spent working at the office, going out, and actually hanging out with friends and family, the average consumer has fewer independent leisure hours dedicated to entertainment, listening to music, and discovering new artists.

In an era when even Netflix seems to be in trouble, music streaming services are simply not as utilized as they were just a few summers ago.

Looking forward into the void of a possible recession, music stocks plummeted in the spring of 2022, and streaming services like Apple Music and Amazon Prime Music have witnessed lower volumes of listenership. On the ticker, behemoths such as Spotify’s stock is down 54% year-to-date and iHeartMedia is down 55%. 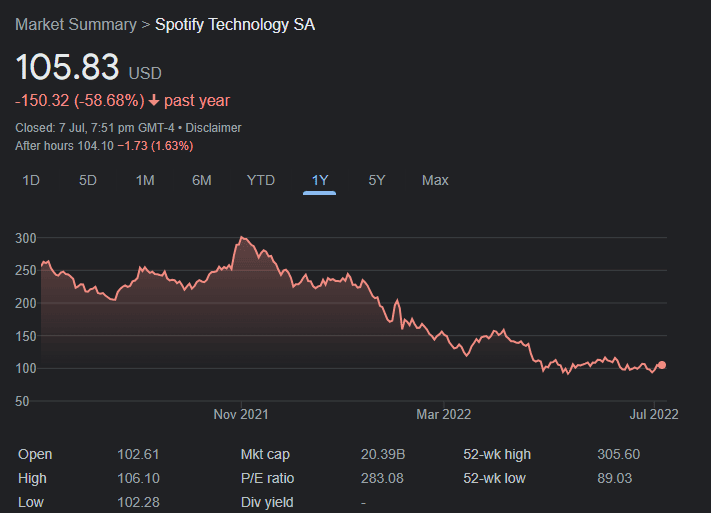 This isn’t isolated to the music industry — the entire stock market as a whole is down. As to when a recovery is in sight is anyone’s guess, and ultimately at the whim of policymakers and federal banks on how (and when) they decide to turn things around.

While on the topic of Spotify, it’s also worth noting that they announced that it plans to reduce its hiring rate as new subscriber counts are growing more slowly than usual, albeit still increasing overall. So as more and more people are looking to cut monthly costs, even die-hard music fans may find themselves listening to more advertisements after switching to free versions of streaming software.

For more music industry insights, check out Gender Inequality In The Music Industry (Breaking It Down)

Thankfully, there is one good thing about music that makes it essentially immortal. No, Bob Marley, it is not that “when music hits you feel no pain,” instead, we are talking about the fact that music brings people together, always has, and always will.

After a few years of social distancing, live events (and especially concerts) are back in a big way (in major cities) with people around the world simply happy to be back out again. In the fortunate venues that managed to survive the aftermath of 2019, musicians everywhere are now living out their “raincheck” tours for fans who have been waiting to see a performance since 2020.

To put it into perspective, Live Nation sold over 70 million tickets for 2022 events in the first quarter of the year, which is on track for double-digit growth against pre-pandemic figures in 2019.

However, no matter how well ticket sales are performing at the top, there are countless small bars, restaurants, and music venues that have struggled to remain in business. In 2021, nearly 90% of independent venues reported that they would close permanently without federal assistance, and sadly, a recession will likely be the final nail in the coffin for many of these independent businesses.

Thankfully, organizations such as the Save Our Stages Act have demonstrated that people care enough about live entertainment to support it through tough times. 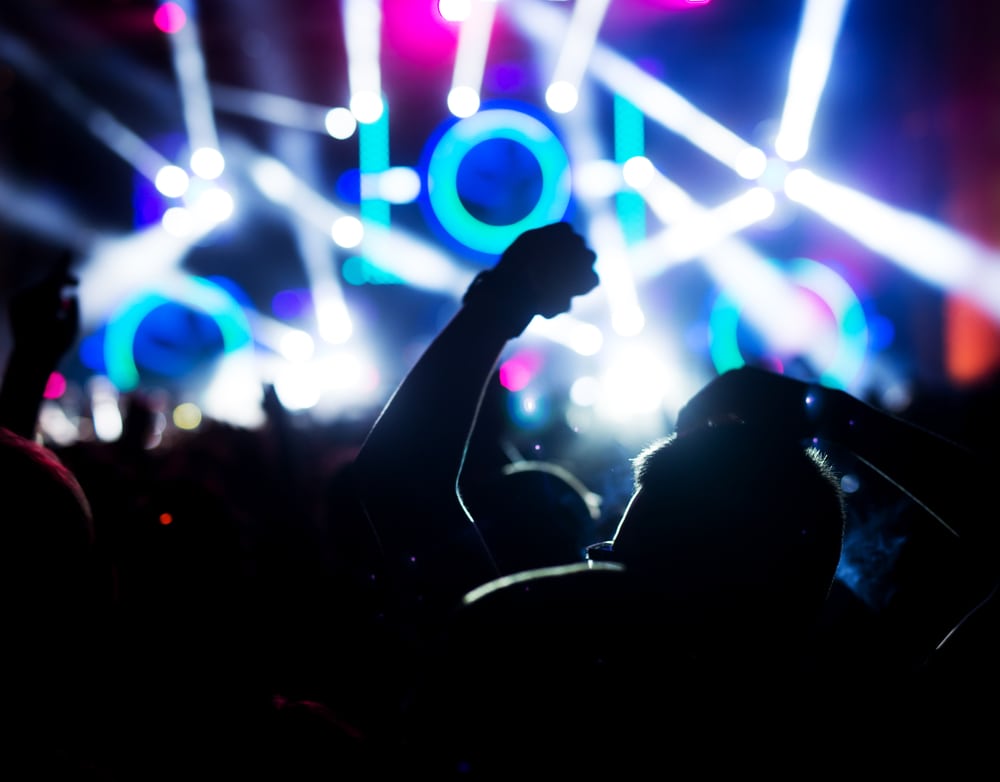 Spikes in live event popularity can also be expected during an economic recession. In times of uncertainty of any kind, music, dancing, and togetherness can be a welcome distraction, a sign of hope, or a celebration of what still remains good in the world at large.

For instance, just a few short months ago, young Ukrainians hit the nightclubs before a seemingly imminent invasion from their neighboring country. And while ticket costs may rise with every other expense on your bank statement, the power of music-centric gatherings make it doubtful that they will disappear in an economic recession.

Looking back at the 2008 financial crisis, the entertainment industry did not slow down and even thrived with a ticket sale boom. In the busy city streets of Anytown, USA, concerts were performed to packed audiences as if American households had not lost trillions of dollars in total net worth.

However, this time may be slightly different backstage.

With serious inflation, labor shortages, supply chain backlogs, and rising costs for venues and music festivals, the show “might not go on” if it cannot logistically or financially be produced in the first place. Many businesses and producers simply struggle to hire and retain new employees after losing over half their staff to other industries, let alone think about turning a profit.

From the gas tank of the tour bus to the drinks behind the bar, everything costs more in 2022, and this is causing both artists and venues to raise their prices. However, we are confident that this will not deter fans from showing up (kind of like the outrageous double-digit “convenience fees” applied by some of today’s online retailers).

Did you know – 71% of sound engineers have worked for free in the last 3 years?

Gazing down the barrel of what seems to be hard times ahead, even the world’s largest pessimists will be hesitant to believe that there will, in fact, be a day the music dies.

Although there may be serious consequences on the supply, demand, and economics of instruments, records, and live events, a recession will not cause the music industry to fold in on itself as challenging times may even inspire people to create, listen, or watch more performances.

If you don’t believe in the power of music, well, then you’re in the wrong industry.

Even Wall Street agrees that music will survive through economic turmoil. In a recent projection, Goldman Sachs believes the music industry will reach $153bn by 2030, performing even stronger than streaming video.

So yes, a recession will affect the music industry just like every other aspect of our economy, and we hope that inspires you to write and perform the greatest blues song of all time to a packed audience.

Want to learn more about the state of music today? Check out our entire editorial catalog.

Did you know the Musicians Union found 50% of musicians quit the industry due to sexism and abuse?