Audio Interface Vs Mixer (Differences, Which Do You Need?)

Pip Dolan
Ask The Hive
Disclosure: We may receive commissions when you click our links and make purchases. Read our full affiliate disclosure here. 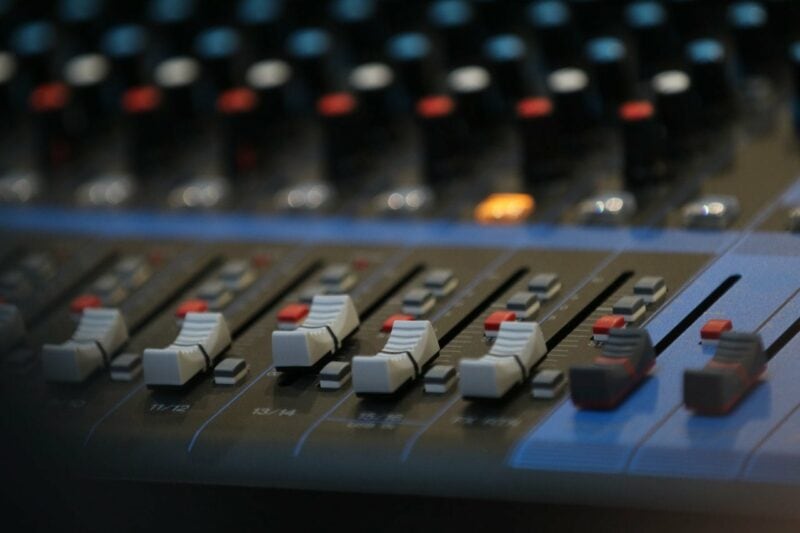 Musicians today have never been luckier. This is especially true when it comes to recording technology.

Audio interfaces (such as the UAD Apollo Twin or Arrow) and mixers both manage multiple channels of audio with ease, but the actual goal of each is fundamentally different.

Trying to figure out which one is best for your home studio setup can be confusing as there are so many different options.

That’s why we put together this detailed guide.

Below, we break down the differences between audio interfaces and mixers, shining a light on what they each do best, where they are a little lacking, and which one you should consider taking advantage of most going forward.

An audio mixer takes your multi-track recordings and combines them together to create one or more output signals. An audio interface, on the other hand, converts the analog signals into digital signals that your computer can understand.

You can use an audio interface as a rudimentary mixer, but any professional studio will separate the roles here. It’s also possible to have a mixer that doubles as an audio interface, allowing you to bring multitrack audio into your DAW with ease.

With that out of the way, let’s move on to the nitty-gritty.

What Is An Audio Interface?

In the simplest of forms, an audio interface (such as the Focusrite Scarlett) is really nothing more than a piece of equipment that connects your microphone (as well as any other instruments) directly to your production computer.

Some people look at audio interfaces and think of them as an unnecessary component that just complicates a home recording studio, but nothing could be further from the truth.

Sure, there are definitely microphones out there that allow you to connect directly to your computer without an interface. But these are aimed at consumers and are usually just for podcasting. Plus in the context of a modern DAW, USB mics offer nowhere near the level of flexibility that audio interfaces do.

When you go with an interface, you’re getting a device that is made for music. The engineers have worked hard to ensure the audio being captured by the interface is of high quality and free of excessive noise and coloration.

The overwhelming majority of these solutions include USB or Thunderbolt connections that go directly to your computer. This integrates easily into your production set up, and without an interface, there’s really no other way to record professional-quality audio with your DAW.

Audio interfaces almost always have preamps, allowing you to connect all different kinds of microphones and instruments that may not have enough “juice” for recording and mixing alone.

On top of all that, audio interfaces offer many more inputs than a traditional PC soundcard. Good luck finding an XLR socket on your computer as well! Mixers, on the other hand, are a lot more complex than your standard interface – even though they are often confused with one another.

A mixer has more comprehensive options per channel, such as EQs and aux sends. They are not necessarily designed to digitally connect with your DAW though many can. Mixers are better suited for live setups where you need hands-on control over all signals in an instant.

The ability to modify audio signals coming from multiple different microphones and instruments on-the-fly is a huge advantage. Audio interfaces do not focus on this as they are primarily for recording – meaning it is expected you will just change the volume later on.

A lot of your modern digital mixers are going to connect to your PC over USB or Thunderboltjust the way that interfaces do too. You may not always get full multitrack support in your DAW though, so check before you buy.

Ultimately, this connectivity helps to eliminate the need for an extra interface entirely without you sacrificing audio fidelity along the way.

Which One Suits Your Needs?

Trying to decide between audio interfaces and mixers really comes down to one important thing:

It’s critical that you figure out exactly what you need this piece of technology to do in your studio before you buy anything. This guarantees that you are using the right tool for the job, eliminating a lot of headaches and hassle along the way.

For example, are you just making demos with your band at home? You may not need anything more than a simple two-channel interface.

Or are you going to be jamming with your bandmates and performing live? If so, you will want to make sure that you have total control over how each element of your band sounds in real-time.

In this example, your money would be best invested in an audio mixer.

You also need to think about things like how you’re going to signal route, how many hardware controls you need to actually manage each of the individual signals, and how many inputs you are going to have to deal with at any one particular point in time.

This simple, handy little audio/MIDI interface has just the right features for basic recording needs, allowing you to plug in and start recording up to 24-bit, 96 kHz audio.

Can a Mixer Replace an Audio Interface?

These days, the overwhelming majority of audio mixer options out there can effectively replace audio interfaces.

Now, this doesn’t mean that every single audio mixer is going to be able to do the job of an audio interface. It’s just that the most popular devices on the market today do have those kinds of capabilities built right in.

This is why a lot of recording and performing musicians decide to get their hands on a quality digital mixer straightaway, using it in their studio set up while at the same time using it during live performances as well.

Yes, this approach is (often) a little bit more expensive – and it does require unplugging and then reconnecting your mixer whenever you have a gig. But this technology is definitely more of an “all-in-one” focus compared to a standalone audio interface itself.

The most important thing to focus on if you’re going to go in this direction is that you get a digital mixer with full multi-channel audio recording.

Not all mixers have this built-in, so don’t count on it. If you’re going to have multiple sources recorded at the same time – say two microphones and half a dozen instruments – you need to be sure that each of these individual channels is sending to your recording set up.

Digital mixers that do not have multi-channel audio recording are only going to send the main stereo mix to your device. That’s probably fine for podcasts or something of that nature, but it’s a nightmare to work around if you’re looking to multi-track an entire band.

What to Look For in Interfaces and Mixers?

Regardless of whether or not you are looking to buy an audio interface or a mixer, there are a couple of key features that you want to be sure your new hardware includes.

Microphone versatility is one of the biggest advantages of using audio interfaces and mixers, but if your new hardware doesn’t include a phantom power source then the odds are pretty good you’ll be upset with the end results.

DI Box vs Reamp Box (Differences & Which One You Need)

You also want to be sure that ALL of your inputs have phantom power, too. Some devices claim to offer this kind of technology but really only ever push phantom power to one or two inputs.

This means you want an interface or mixer that can handle both XLR and 1/4″ jacks. This is usually the case, and it’s not uncommon to see a single socket that supports both – even on cheaper interfaces.

Some interfaces might only have two XLR sockets, and the rest are for 1/4″ jacks. If this is the case, make sure this won’t inconvenience you. It’s better to get an interface with all the right connections rather than having to fiddle with extra cables to convert everything.

3. Both Stereo and Mono Channels

This part is optional, but for some it’s really important. If you’re dealing with a lot of outboard gear, stereo jacks can be a real lifesaver. These will usually take the form of TRS (or Tip Ring Sleeve) sockets (check our guide on TS vs TRS cables here).

You’re more likely to find these on mixers as part of an effects loop. It’s not out of the question to find an interface with stereo inputs, but usually you are expected to use two separate mono inputs for left and right channels.

If you are going to need your new mixer or audio interface to be portable (perfect for live performances) it’s not a bad idea to look at something that can be powered via USB.

This opens up more freedom in terms of where you set up, and how easy it is to get going!

A lot of audio interfaces provide “bus power” meaning they can be powered purely by your computer via USB or Thunderbolt. This feature is usually found on smaller interfaces that don’t require as much power. Some bigger interfaces can do this too, but they will often only have enough power for two channels.

Hopefully by now, you have a little bit more information to make the choice when deciding between an audio interface and a mixer.

Audio interfaces offer a lot of streamlined power in a relatively compact form, and while they aren’t super useful when you are performing live they make plenty of sense in any studio setup. If you’re recording into a DAW, an interface is absolutely essential.

Mixers on the other hand are better for live situations, or for summing multiple inputs before they are sent into your interface. For this reason, many producers will have both a mixer and an audio interface.

Audio USB mixer configurations are perfect for live performances and can take your producer skills to the next level in a home studio as well. They are a bit more expensive, but you get extra capabilities and significantly improved performance for that investment. These devices can be seen as a hybrid between an audio interface and a mixer, but may not deliver quite the same audio quality as an interface.

All in all, it really comes down to what you’re looking to do with your setup. Consider what roles in your studio need addressing first and foremost. Then do a little research, read some reviews, and you’ll be on your way to another happy purchase!

(There’s so much more that audio interfaces can do that we couldn’t cover in this article, so head on over to What Is An Audio Interface Used For? for the full scoop. Alternatively, check out our list of some of the best USB-C audio interfaces money can buy.)