Mooer Micro Preamp 005 Review. Worth It Or Junk? Whether you’re jamming with friends, recording at home on a budget, or trying to build your rig and sound, there are a lot of ways people try to recreate the inspirational sound that led them down their musical path.

Getting a good tone “in the box” (my computer) has been one of my main focuses over the past few years. I have come across a few good, and a few bad methods of doing so, and these Mooer micro preamps were definitely a welcome surprise.

Let’s start with the concept. Mooer has created a range of pedals that are based* on iconic industry monsters and classics from the likes of Mesa Boogie, Marshall, and Deizel to Fender, Vox, and Two-Rock.

However, whilst these classics would require a substantial investment, these Mooer pedals won’t break the bank… They allow you to really change up your tone and get that step closer to the sounds of your heroes without emptying your wallet.

They are designed to be added to your current rig or replace it.

These pedals are versatile. You can use these through an effects loop, you can place it in the front end of your signal chain and go directly into your amp,  or you can bypass your amp entirely and plug straight into a PA or recording interface.

This range is named appropriately when compared to most pedals out there as they sure are small. At only 42mm wide, 52mm tall, and 93.5mm long, you could potentially fit two “rigs” in your pocket and head to a gig.

The only downside to their size is that they cannot house a 9v battery, so you’ll need to keep that 9v PSU in good shape. You don’t want that to pack it in during your gig.

The “CH/Cab” button allows you to either change from ChA to ChB or engage the cab emulator function.

The Stomp switch can also be used to either turn the pedal on or off or switch from ChA to ChB, just holding it down will toggle its function. ChA and B are nothing unusual, a “Dirty” (red) and “Clean”(Blue) channel but even the clean channel has quite a bit of gain.

A great feature of this pedal is that although there is only one set of control knobs, each channel remembers its last settings so you don’t have to share knob settings over the two.

This means once you’re dialed in, you’re free to switch between the two, knowing you have your sound locked in. 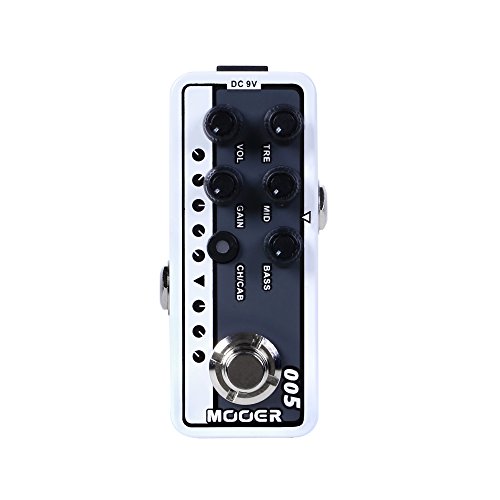 How Does It Sound?

This pedal started out as the “Fifty Fifty 3” but was later renamed “Brown Sound 3” due to its original name being too similar to the amp it was modeled off.

For those guitar heads reading, you can probably guess the inspiration behind this pedal and for those who can’t, it’s modeled on the iconic Peavey 5150; the unmistakable sound of Van Halen and more specifically, Eddie Van Halen.

The Peavey 5150 has a rough, thick, and crunchy rhythm tone and a cutting lead tone with an unmistakable sustain, and did I mention it’s flippin’ loud?

It’s a standard in a lot of studios around the world and for good reason. It is a tone still widely used today. It sounds big, dirty, and heavy. My kind of sound!

Putting The Pedal Through Its Paces (Audio Demos)

Now I know what you’re going to say, but test two and three are not trying to compare how well the pedal emulates the 5150, they are to test the quality of the product against products I use in most of my mixes and trust.

The real test is test one. Two and three are more for me, but still good to know.

This was the tone comparison test and was relatively easy. I did this in two ways.

I set up my 5150 head with one of my Marshall cabs and played for about 20 minutes to get the feel for it. So phase 1 was the easy part.

The pedal did require a little bit of Eq in the highs and less of the mids but I was pleasantly surprised.

The second way I tested this was with a standard SM57 into my interface and into my DAW. I technically did this at the same time as the above so it was the same performance and in my eyes, a fairer test.

In this test, I could toggle each recording side by side and get a quick comparison.

After both versions of the test, as I said, I was pleasantly surprised for the most. I was impressed with the tonality of the pedal vs the 5150, the gain sounded pretty decent and I did feel like I was playing a 5150…almost.

I do think the 005 lacked a bit of definition in the high mids and tops, and unfortunately it wasn’t something the pedal EQ could fix.

The tone was present in its high mids and tops, but I felt the 5150 had more character in its high mids than the 005. This wasn’t a dealbreaker, and considering I wasn’t paying anywhere near what the 5150 would cost, I thought it was still a great buy.

When I was trying to match the lower gain settings of the 5150, I could definitely hear a huge difference.

The 005 didn’t break up the same way and had less of a smooth sound. It almost sounded “processed” and less natural. Not a bad sound by any means but compared to the 5150, it didn’t quite hit the target.

For this test, I needed to split my signal into two. This would allow me to add different plugins to each signal independently and hear them side by side in real-time. For this I used an active ABY pedal.

7 Best Guitar Stools (That’ll Save Your Back)

Both signals were then run through a Radial JDI DI box each and feed into my interface.

Signal 2 went into the Mooer 005 and into another Radial JDI was processed with “Torpedo Wall of sound” for power amp simulation and the “Mikko” cab simulation plugin. I then did one performance with a backing drum track for some context.

Some of you might be wondering why I have chosen to use an IR plugin as it’s going to color the sound significantly.

Well, even though the cab responsible for most of the tone we hear, the way the preamp distorts a guitar signal is another characteristic that I listen for when choosing amps/amp sims.

Some sims bubble in the low end, some squeeze the highs, and some just sound too compressed. By using a good cab IR and keeping that constant across both tracks, I can then focus on what the pedal is actually doing to the sound.

They are different amps but this isn’t a tone comparison, it is a usability/quality test.

For this test, I kept the setup the same as It was only some of the plugins that needed to change. The “Amped Roots” channel stayed the same and I removed the plugins on the 005 track.

Now they are totally different sounds as I am not sure what cabinet the 005 emulates but it still held its own.

What I did was recorded two takes and panned hard left on one track and hard right on the other. With the drums centering the piece, I could hear how it would sound in a mix, side by side with a decent guitar tone.

I have to say, I was impressed with the sound, it still sounded thick and dirty without getting too boxy.

As far as tests two and three compare, my preference was the 005 with the Mikko Cab but I would happily use the 005 – Brown Sound 3 w/cab emulation. I think it definitely held its own and would add a wicked vibe to any mix you do.

Let’s face it, we all want the best but more often than not the best is out of reach.

The Mooer 005 – Brown Sound 3 was definitely a good buy for me and that is just from the recording/production point of view.

If you take into account that it’s a relatively cheap way to get different and decent sounds utilizing your existing rig, it’s a no brainer.

There are also 19 more of these pedals based on other heavy hitters, so even a small collection of these micro preamp pedals could be a serious stepping stone to getting that studio amp collection underway but maybe that calls for more reviews.

Even so, the Mooer 005 – Brown Sound 3 should definitely be locked in for that collection.

*These Mooer products are not endorsed by their iconic inspiration, they are simply soundalikes.