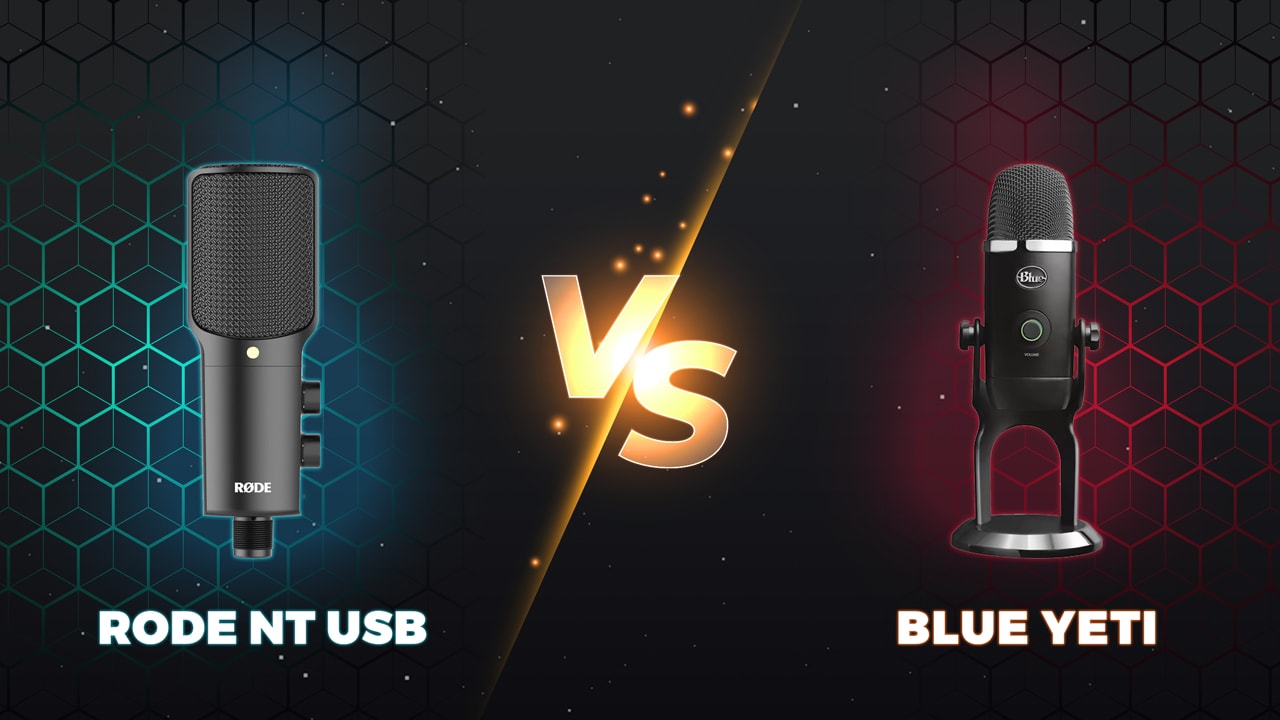 Rodrigo Sanchez·
Microphones
Disclosure: We may receive commissions when you click our links and make purchases. Read our full affiliate disclosure here.

The RØDE NT-USB and Blue Microphones Yeti are both fantastic USB condenser microphones for podcasting, video calls, and more.

They come from highly respected companies, each with a tradition of offering quality products at a good price point. These mics are quite similar, which means what they don’t have in common will be critical for determining which one is right for you.

In this article, we’ll break down what makes these mics great, what they have in common, and ultimately, what sets them apart.

RØDE NT USB vs Blue Microphones Yeti: Which Is Best? The RØDE NT-USB and Blue Microphones Yeti are rather similar. They are both stylish, look great on a desk, and can be used for the same applications.

The difference between them is small, with the RØDE NT-USB having a lower maximum sound pressure level (by 10 dB) and costing $40 more. Having said that, it is the more stylish option, and the build quality is exceptional.

On the other hand, the Blue Yeti offers four polar patterns (cardioid, omnidirectional, bidirectional, and stereo) while the RØDE NT-USB is only cardioid.

Which one is best for you will largely be a matter of taste based on the sound you prefer: neutral (the NT-USB) or colored (Yeti).

That said, because they are intended for the same applications and are very similar, I have to go for the more affordable Blue Yeti.

As mentioned, both the RØDE NT-USB and Blue Yeti are very comparable mics.

For instance, they are both USB condenser microphones, excellent for picking up subtleties and nuances that standard dynamic mics typically do not capture.

Another point in common between the RØDE NT-USB and Blue Yeti is their frequency response of 20 Hz to 20 kHz.

This is a standard response for condenser mics in general and is adequate to capture the human voice with detail. It is great that both manufacturers include this standard studio-mic frequency response for USB mics that will mostly be used for podcasting and video calls!

As for their resolution when recording, both mics offer 16-bit depth and a 48-kHz sample rate, which is acceptable for podcasting. However, if you’re recording instruments with these mics, keep in mind that 16-bit audio has its limitations compared to 24 and 32-bit audio.

Both of these USB microphones feature a stereo headphone jack for monitoring, a volume knob, and a gain knob.

Additionally, though the RØDE NT-USB and Blue Yeti come with desk stands, both can be mounted on a standard microphone stand.

Because both the RØDE NT-USB and Blue Yeti condenser microphones are very similar, their differences may ultimately swing you one way or the other.

Price aside, the main difference is that the Blue Yeti features four pickup patterns while the RØDE NT-USB only has one.

The Blue Yeti comes with a triple-capsule array that allows you to choose one of four polar patterns to record: cardioid, bidirectional, omnidirectional, and stereo. In practical terms, you get more options for podcasting.

For instance, if you are interviewing someone that sits across from you in close proximity, the bi-directional pattern means you can record the whole conversation in one single mono recording.

On the other hand, if your podcast involves three people talking at the same time and you only have one mic, then the omnidirectional polar pattern is ideal for this situation.

Contrast this with the RØDE NT-USB and its cardioid pattern, which is great for just one person speaking into the mic.

Another difference between these mics is their maximum SPL. The RØDE NT-USB features a Max SPL of 110 dB while the Blue Yeti offers 120 dB.

Although both are perfectly capable of handling almost any podcasting needs, the Blue Yeti can deal with a screaming host that is very close to the mic with less distortion.

Again, not a big deal, but it is usually better to have a higher maximum SPL just in case.

As mentioned above, both the RØDE NT-USB and Blue Yeti have a frequency response ranging from 20 Hz to 20 kHz. This helps capture nuance and details on acoustic instruments, voices, and more.

A quick glance at the curves provided by their respective companies reveals that the RØDE NT-USB has a bump from 2 kHz to 10 kHz, with a peak at around 5.5 kHz.

On the other hand, the Blue Yeti has a small bump at around 1 kHz and another one between 2.5 to 7 kHz.

In practical terms, the NT-USB has more of a neutral sound, while the Yeti has more character.

The Blue Yeti comes in a variety of versions and colors. Let’s start with the model reviewed here, the Blue Yeti Multipattern USB condenser.

It comes in Blackout, Midnight Blue, Silver, and “Without”. All these are the same exact mic with the same price, but different colors.

Blue also offers the Yeti Nano, for half the price of the Yeti. The Yeti Nano only comes with two polar patterns and one multifunction knob that adjusts microphone gain, headphone output, and mute switch.

The RØDE NT-USB only has one version in black.

The RØDE NT-USB includes a pop filter that fits onto the base of the mic, providing ideal positioning for the reduction of bothersome plosives.

Additionally, this mic also allows you to adjust the monitoring level and mix between your recorded audio and microphone input via a dedicated blend knob.

The Blue Yeti does not have any of these features but includes a mute button instead.

The Blue Yeti has the RØDE NT-USB beat in this category.

They are very similar mics, intended mostly for podcasting, audiobooks, voiceovers, calls, and similar applications, but with a significant enough price difference.

Although both are very affordable mics, the Yeti is 40 dollars cheaper than the RØDE NT-USB. And it comes with more polar patterns.

As stated above, the RØDE NT-USB has a neutral sound when compared to the Yeti’s more colored tone.

In terms of which one actually sounds better, this is debatable. Some folks opt for a clean mic that captures what is in front of them as is, perhaps adding processing to the recording later on.

Others prefer to add character as they record, and with this in mind, the Blue Yeti comes “ready to go”.

Ultimately, the sound difference is not big, so it is hard to say which one sounds the best. But the Yeti is perhaps more “treated”, and offers more variation due to its different pickup patterns.

Although they are very similar mics, the Blue Yeti is the better buy, mostly because of its lower price. Add to that the fact that the Yeti gives you four polar patterns to choose from and a higher max SPL.

There is the possibility that you prefer the neutral sound of the RØDE NT-USB, and its ability to blend the mix between the input and your software.

However, these are rather small differences, and the sound of each mic will be a matter of taste, and not worth 40 extra dollars. Having said all this, if looks are really important to you then I would rate the RØDE as the more stylish option.

Regardless of your choice, both the RØDE NT USB and the Blue Yeti are fantastic choices for podcasting and video calls, plus they can be used for recording vocals and other instruments like an acoustic guitar.

Is RØDE NT-USB good for singing?

Yes, the Rode NT-USB is a condenser mic that accurately captures the human voice.

Additionally, the included pop filter can easily be moved in front of the microphone so you can eliminate unwanted ‘s’ and ‘p’ sounds while recording vocals.

For more info on pop filters, read our article Pop Filter vs Foam Cover (Differences & Which To Use).

What USB type does RØDE NT-USB use?

What does the gain knob do on a Blue Yeti?

This is essentially the volume of the microphone. Higher gain equals more volume.

You’ll want to make sure your recordings are not too soft, as you will lose quality. Aim for peaks around -6 dB when you are talking at the absolute loudest volume. Any louder and you’ll risk clipping, any softer and the restrictions of 16-bit audio will become more apparent.

Can the RØDE NT-USB and Blue Yeti be used for recording acoustic guitar?

Yes, both the RØDE NT-USB and Blue Yeti can be used for recording acoustic guitars in a well-treated space.

On the subject of podcasts, don’t forget to check out 11 Music Production Podcasts You Need To Subscribe To!