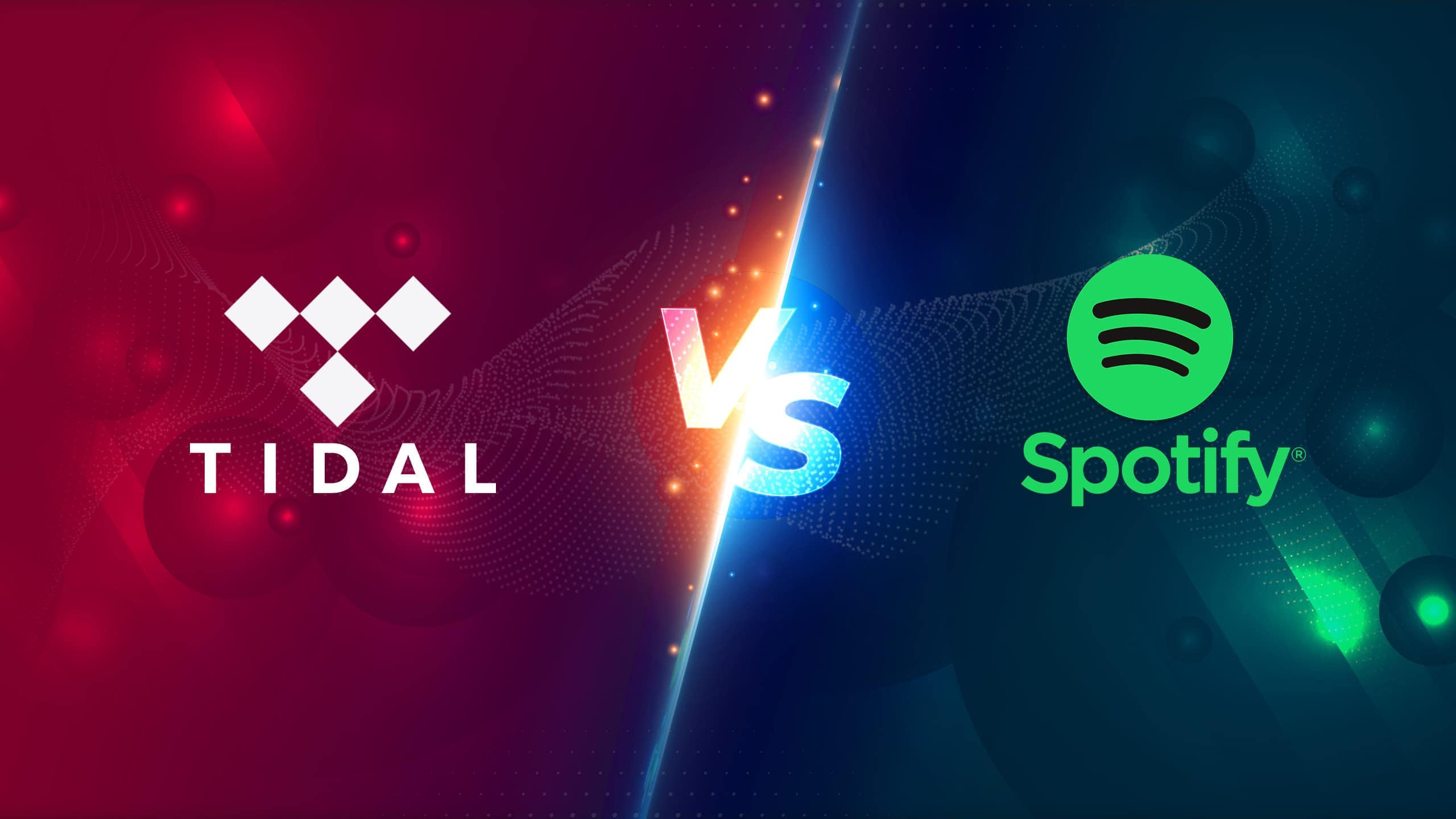 Tidal vs Spotify (3 Reasons To Switch Over)

With the constant decline in revenues from physical sales and performance rights, the debate on music streaming services and their role in the artists’ well-being is more heated than ever.

Since 2015, the music industry has been gradually recovering after the digital revolution that took the industry by storm at the beginning of the millennium.

The recovery has been driven, you might guess, by the streaming services, which now make up over 60% of the global recorded music revenues.

Artists have caught on to how streaming services should be an integral part of their income, so rightfully they have begun questioning the revenue sharing system and ethics of the biggest player in the game, namely Spotify.

Today Spotify is home to over 400 million active users worldwide, more than double the number of listeners of its main competitors, Apple Music, and Amazon Music.

When it came out in 2006, Spotify ended the digital piracy era of music, allowing artists and labels to get back control over their content.

Even though Spotify’s crucial role in the music landscape is unquestionable, musicians and listeners worldwide are now asking the streaming service to support the artists through fairer streaming royalties and a level of transparency in the revenue distribution that Spotify hasn’t provided so far.

As a response to Spotify’s difficulties in meeting their demands, artists have become outspoken about their dissatisfaction with the streaming service and shifted to new platforms.

By providing the lowest revenue shares and unclear payment methods, Spotify is ultimately falling short of its promise to musicians. With a lossless audio experience and high-fidelity sound quality, stream music like you've never heard it before. No compromises. Just pure sound.

While Spotify hesitated, other streaming services have been able to meet the needs of artists and gained popularity among musicians and fans alike. Enter Tidal.

In a time when morals and business ethics are becoming more and more crucial for music fans, Tidal has proven to be the musician-friendly service people were looking for.

With a fairer distribution system, high-quality audio streaming, and more transparent business practices, the subscription-based music service carved out an audience of listeners who care about the artists’ remuneration and are willing to pay more for a subscription plan that directly supports the musicians they love.

Today, I’ll draw some comparisons between Tidal and the streaming giant Spotify to highlight why you should switch to the less popular (for now) music service, regardless of whether you’re a music producer or an audiophile.

So, Why Choose Tidal Over Spotify?

Ultimately, we feel that there are 3 core reasons to switch from Spotify over to Tidal:

Let’s dive deeper into each of them.

Though Tidal’s service being more profitable for artists is worth praising, the remuneration itself is not the biggest issue here, as it’s the way the revenue streams are distributed among artists.

Spotify pays artists pro-rata, meaning they calculate the total streams within the platform and estimate the proportion each artist should receive.

This model greatly favors prominent artists, often leaving independent musicians with mere cents even when they have a loyal and active fanbase.

The alternative to Spotify’s payout method is the user-centric payment system (UCPS), which gives a large part of the listener’s subscription fee to their favorite artists.

Tidal not only uses UCPS for its service but also gives 10% of your subscription fee to the artist you listened to the most through its Direct Artist Payout program.

The direct artist payment system promoted by Tidal and other players is becoming a game-changer in the industry, allowing relatively small artists to receive financial support directly from their most loyal fans.

The more transparent user-centric payment system that governs Tidal and Deezer, among others, makes the distribution of funds more equal, as opposed to the pro-rata payout system used by Spotify and Apple Music.

Want to read deeper into the stats? Check out our post on music streaming rates and current music industry payout stats.

Another reason why you may want to give Tidal a try is the streaming quality.

You don’t have to be an audiophile or have expensive headphones to notice the difference between Spotify’s 320kbps files and Tidal’s 1411kbps.

Without getting too much into detail, the music files on Tidal reproduce the original sound quality of the recordings more transparently, which, combined with good headphones or hi-fi systems, provides a richer sonic experience.

Tidal currently offers four different audio settings: Normal, High, HiFi, and Master, and the last two are the ones that really make Tidal stand out.

HiFi recordings offer audio at 44.1kHz/16bit thanks to the CD-quality lossless FLAC files.

The Master option guarantees high-resolution FLAC or WAV audio files at 96kHz/24bit. However, not all songs available in their catalog have the Master Quality Authenticated (MQA) option.

Tidal’s hi-fi audio approach can be appreciated by anyone, but there’s no doubt that Spotify’s average settings can meet the needs of casual listeners.

However, if you don’t want to compromise on the audio’s quality and accuracy, Tidal is the best music streaming service for you, hands down.

There’s no doubt the main issues for artists using Spotify revolve around the unfair compensation and the way its algorithm tends to promote more established acts.

Over the years, there have been situations when Spotify’s actions have been ambiguous, to say the least.

The “pay for play” issue involved record labels and artists who paid curators of popular playlists to get their music in them.

This has been a problem for various music streaming services but nowhere as severe as it’s been on Spotify, which ultimately led to Drake’s album Scorpion ending up in various unrelated playlists throughout the platform.

In 2017, Spotify also became infamously known for using dark arts to curate its content by paying producers to make music to publish on highly popular playlists and regulate their mood.

These artists didn’t have a label, an agency, a fanbase, or previous releases that could possibly justify their overnight success, which is why many music magazines started investigating them.

It’s no secret that the biggest record labels in the world are Spotify’s stakeholders and therefore receive a big chunk of the music streaming giant’s revenues.

With such leverage, both financially and content-wise, it shouldn’t come as a surprise these four big players could be pushing their own content and overshadowing independent artists.

Finally, there’s also the way Spotify founders invest their wealth, with the CEO Daniel Ek donating €100 million and joining the board of Helsing.ai, a developer of AI-powered military-grade equipment.

Many artists expressed their disapproval of the way the platform’s revenues were indirectly used to support warfare and encouraged their fanbase to stop using the platform.

Whether you’re a fan of high-quality music or simply someone who wants to support their favorite artists in the best possible way, Tidal is an excellent alternative to the music streaming giant we’re all familiar with.

Still, Spotify is still great in many ways. There’s no doubt its freemium service saved the music industry from the music piracy threat.

Its social-media approach garnered positive responses from musicians and listeners alike, giving artists the chance to keep their audience up to date in an innovative way.

The music playlists provided by Spotify are carefully curated and often spot on. It’s just a shame that its shortcomings have overshadowed many of its greatest strengths.

Ultimately, Spotify has been under the microscope because of its popularity. If, or when, other players will become as popular as the Swedish streaming service, we’ll see whether they’ll also continue to maintain their fairer approach to creatives.

Tidal is one of the music streaming platforms that are showing there’s a more musician-friendly way to meet the needs of fans, businesses, and artists, empowering us to choose which direction the music industry should take in the future.