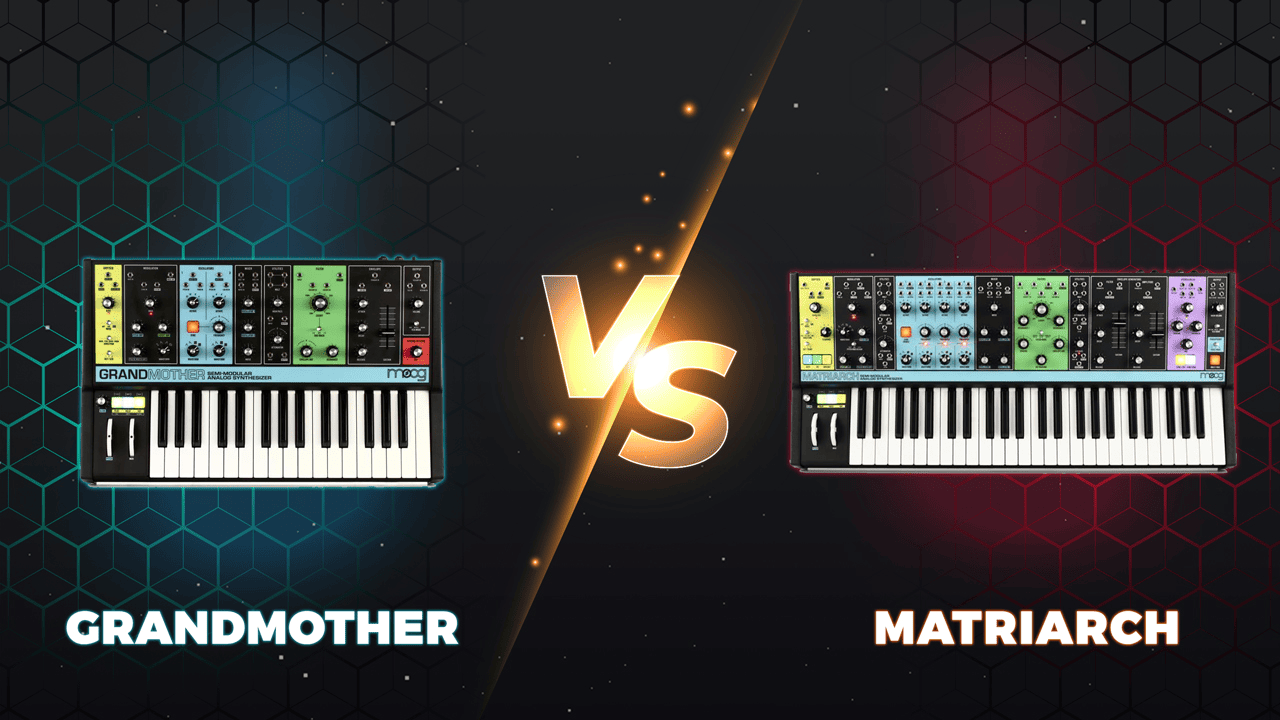 Moog is responsible for many classic synthesizer designs over the years, and they continue to produce innovative instruments to this day.

Two models that seem very similar, the Grandmother and the Matriarch, offer a degree of semi-modular flexibility that is absent in more ‘fixed’ designs like the Moog Subsequent 37.

In this article, we’ll break down the key features, specs, and sounds of each in order to help you decide which motherly Moog is right for your musical needs.

Moog Grandmother vs Matriarch (Who Wins?) Though it’s a difficult decision and both of these instruments would be a great addition to your arsenal, we’re going with the Grandmother as our winner.

The Grandmother may only be a mono synth, but the smaller form factor and lower price make it a better buy in our eyes.

Getting all these features on a synth that costs nearly half of the pricier Matriarch is seriously impressive.

Another deciding factor that may come down to personal preference is the effects. The Grandmother’s spring reverb is the favorite to our ears over the delay of Matriarch.

The Grandmother is a 32-key monophonic semi-modular analog synthesizer. It has been one of Moog’s most popular offerings in recent years and is readily available at most major music stores, retailing for around $1149 USD.

The Grandmother has a compact form factor, making it easy to take to the studio or a gig. These features combined with its great analog sound make this synth stand out against the competition. With paraphonic playability and an impressive 90 modular patch points, the Moog Matriarch semi-modular analog synthesizer is a sound-design powerhouse.

The Moog Matriarch is the newer, larger, spiritual successor to the Moog Grandmother.

The Matriarch has 42 keys, 4 note paraphony, a stereo signal path, and more features that give it an advantage over the Grandmother.

But with all that in mind, it does command a higher price; the Matriarch retails for $2199 USD. It is also more of a boutique item and is harder to find in local stores.

Features: A Side By Side Comparison

In this next section, we’ll be delving deep into the differences between these two synths, looking specifically at how certain specifications, features, sound, and pricing divide the two.

The Moog Grandmother is monophonic, meaning only one note can be played at a time. Some may find this limiting, but it also makes the synth great for basslines and staccato notes.

On the other hand, the Matriarch is paraphonic so it can play up to four notes at once. All four voices share the same signal path and filter, unlike true polyphony.

Regarding the oscillators, the Grandmother has two, each with a variety of waveforms. The oscillators can be synced and detuned from another for more tonal possibilities.

The Matriarch’s oscillators are similar to the Grandmother’s, but its modern equivalent has four of them. All of the oscillators can be synced together, and also have frequency and pulse width modulation inputs.

For the Moog Grandmother, the filter is a 24 DB/octave ladder-style filter with a classic Moog sound. It also has the option for keyboard tracking.

The filter section on Matriarch is again similar to Grandmother, but it has two ladder filters. They can be run in series, parallel, or stereo, making the filter very versatile.

The Grandmother’s 256-step sequencer also has an arpeggiator, and can play back a sequence forwards or in reverse. The Matriarch also has a step sequencer with 256 steps, but it can also save up to 12 sequences in its memory for playback.

Moog’s Grandmother has a 32 note keyboard with velocity sensitivity, which can be routed to a number of destinations via the patchbay.

The Matriarch’s keyboard goes one better and has 49 keys, as well as velocity and aftertouch. Each of those parameters can also be rerouted via the patch bay.

With paraphonic playability and an impressive 90 modular patch points, the Moog Matriarch semi-modular analog synthesizer is a sound-design powerhouse.

In terms of the Grandmother’s patchbay, it has 41 points that you can use to reconfigure the synth, as well as connect it to external modular and semi-modular gear.

The patchbay on the Matriarch has 90 patch points for lots of patching potential. It also features an expression pedal input.

There is a built-in analog spring reverb with mix control in the Moog Grandmother. The reverb also has an external input so you can run any other source through it.

On the flip side, the Matriarch ditches the reverb for an analog delay unit in its effect section. The delay is based on the one found in the classic Moog 500 series. It also has a stereo ping pong mode.

Modulation with the Grandmother is provided by an LFO that is routed for pitch and filter modulation but can also be assigned elsewhere via the patch bay. It also has a sample and hold output for additional random modulation.

The modulation section on Matriarch is very similar to Grandmother, but it also has an additional LFO available.

Lastly, there is also a utility section on the Grandmother synth with a multiple, attenuator, and an additional filter.

The Matriarch has 2 utility sections with multiples, attenuators, and an LFO.

When it comes to cost, the Moog Grandmother does come at a lower cost than its counterpart. It’s by no fine margin either, with nearly $1000 separating the two. This makes the Grandmother the clear winner in this category.

As mentioned earlier, the oscillator section on both the Grandmother and the Matriarch are very similar in terms of design and sound.

Each oscillator has a triangle, sawtooth, square, and pulse waveform. Any of these waveforms can deliver rich, warm analog sounds that are great for a variety of applications.

A big difference between the two synth’s sounds comes down to the onboard effects.

The delay on Matriarch is very dynamic and wide in its stereo capabilities, and the ping pong mode is a neat addition.

The paraphony of Matriarch also lends itself nicely to chords and pads, something the monophonic Grandmother just can’t do.

There’s even more to these two synths than we could cover comparing them, so here are some answers to the most common questions about these two Moogs.

Are either of them polyphonic?

No, the Grandmother is monophonic, and the Matriarch is paraphonic. While the Matriarch can play 4 different notes at a time, they all share the same signal path.

Does either synth have presets?

No, both are analog and semi-modular, so you can save configurations by patching the synths, but there are no presets that can be recalled.

Can either be used with Eurorack gear?

Yes, both synths have patch bays that let them interact with any Eurorack modules via control voltage.

How can I quantize the Grandmother/Matriarch?

Neither synth has a built-in quantizer for pitch, but they can be used with an external Eurorack quantizer.

How do I enable the spring reverb on Grandmother?

Make sure nothing is patched into the reverb in the jack on the back panel, then turn up the reverb mix control to the desired level.