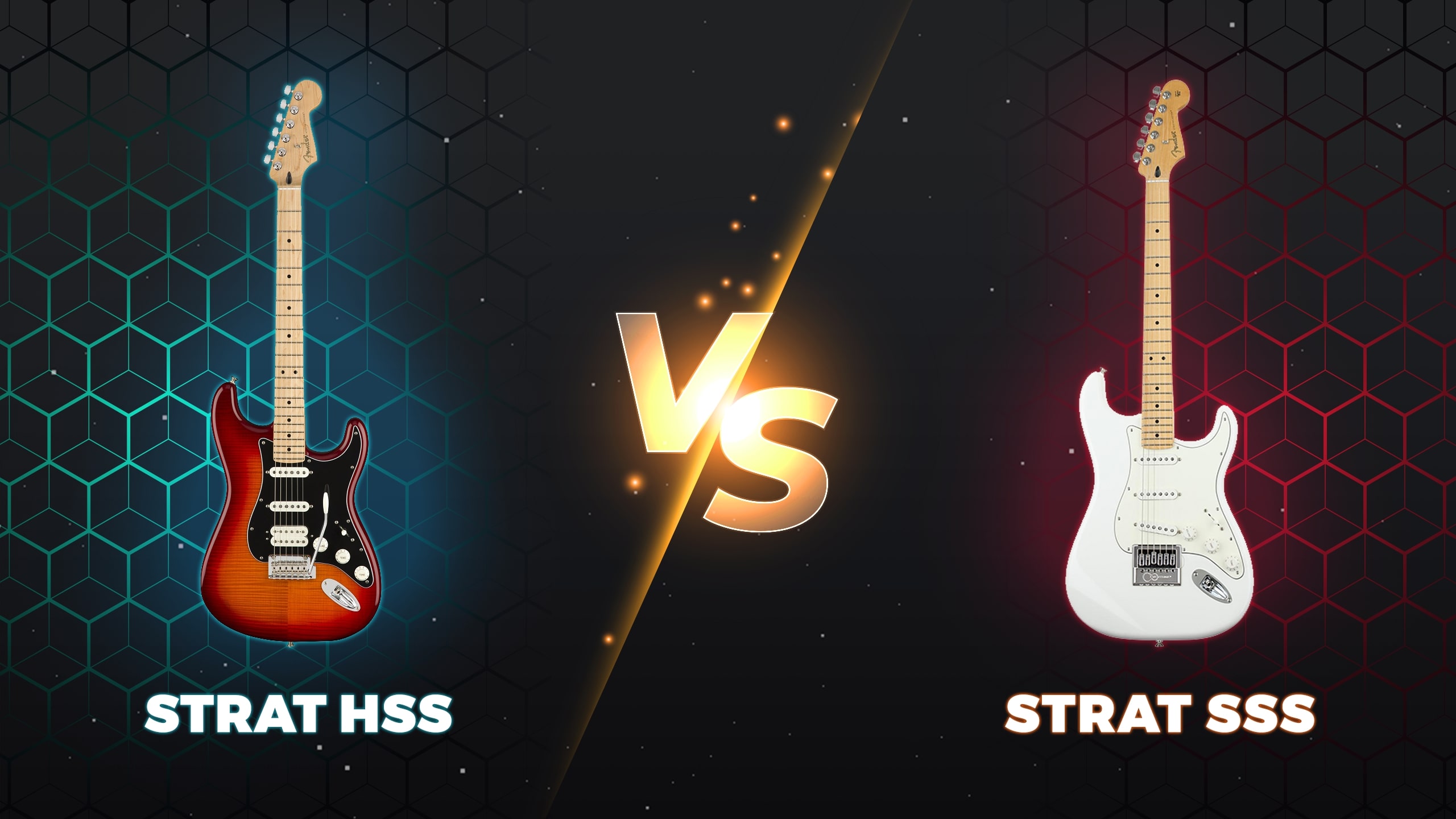 Stratocaster HSS Vs SSS (Key Differences, Which Is Better?)

Charlie Cummings·
Guitar Pickups
Disclosure: We may receive commissions when you click our links and make purchases. Read our full affiliate disclosure here.

If you’re new to Fender Stratocaster guitars, it can be tricky to decide which one to get.

Not only do they come in a variety of colors and finishes, but the pickup configurations are different depending on the model. Particularly if you’re new to guitar, the terminology can get a little confusing.

In this article, we provide a guide to help you understand the differences between a Fender Stratocaster with HSS pickups and one with SSS pickups.

HSS Vs SSS: Who Wins?

Although you can get them in a variety of voicings with varying outputs, as a general rule single-coil pickups are suited to players who use lower amounts of distortion in genres such as classic rock or funk.

While humbucking pickups will keep nice and quiet with higher amounts of distortion, making them ideal for metal or punk guitarists.

SSS Strats have three single-coil pickups which you can toggle between by using a 5-way switch for blending the pickups or switching to one of each.

However, they’re not all quite the same, as single-coil bridge pickups are made with more coils wrapped around them, which are also wrapped tighter than the neck pickups.

This is to compensate for any possible volume differences across the length of the guitar. Additionally, depending on your playing style and which pickup you select, your tone will sound different from one bridge position to the next.

This is due to the relationship between the strings and the pickups.

When you play over the bridge, the strings are closer to the pickup and tend to sound brighter with more high end because they have less room to vibrate. Whereas if you play over the neck, you get a warmer and fuller tone with a little more midrange and body to it.

So if you’re worried that an SSS Strat will sound too quiet or thin, be assured that it still packs plenty of punch.

HSS Guitars: The Best of Both Worlds

If you’re new to guitar and not sure which styles you’ll be playing, or you want to be able to play a jazz gig one night and a metal show the next (hey, it could happen!), the HSS Strat could be the axe for you.

HSS guitars in general are known for their versatility and beefier, cleaner tone. Typically the humbucker sits in the bridge position as that’s generally what we’ll be on for the majority of our rhythms. This limited-edition Player Stratocaster HSS Plus Top maple fingerboard electric guitar puts all of the classic features of the Strat at your fingertips while adding a modern edge.

Why We Love It:
View Price On Guitar Center Check Price On Sweetwater

HSS Strats use a bridge humbucker pickup and two single-coil pickups in the middle and neck positions. Just like with the SSS Strat, you can toggle between all three pickups with the 5-way toggle switch.

It’s helpful to know a little bit about how guitar pickups are made and how they work.

A basic guitar pickup is made of a magnet wrapped in conductive wire and uses the scientific concept of electromagnetic induction, which was first discovered by scientist Michael Faraday in 1831.

The magnet is most commonly made of alnico or ceramic, although some companies use neodymium. When the guitar strings are strummed, the magnet generates energy that transfers to the wire around the guitar pickup.

Then, the wire responds to these vibrations or movements and creates an electrical current. The current carries energy first to your guitar amp, then back out into the air to be heard. The Affinity Series Stratocaster HH from Squier combines classic Strat looks and playability with a full-bodied tone to deliver a wallet-friendly 6-string that is a great addition to any guitar collection.

Single-coil pickups (check out or top picks for strats here) have one coil of wire, hence the name, and six small magnetic poles, one for each string of the guitar.

They tend to have lower output, meaning they will have less intrinsic gain, and they usually sound a little brighter with more top-end.

Sometimes single-coil pickups will hum due to electrical interference from nearby appliances, which can be a nuisance, but many guitarists love their tone and they definitely embody that classic Strat sound.

Double-coil pickups, or humbuckers, have two coils. One is just like a standard single-coil pickup and the other has inverted magnetic poles, which cancel out any noise interference or hum.

Humbucking pickups tend to have a higher output with less background noise, with a more robust, fuller, and aggressive tone.

They’re generally favored by guitarists who use more distortion, such as metal players, as the need for that hum cancellation becomes much more prevalent the more gain you use.

If you’d like to dive deeper into the topic, check out our guide to the types of guitar pickups.

The short answer is yes, although it is a little bit of a project.

One of the main considerations with converting an SSS configuration to an HSS pickup configuration is the shape of the guitar body and the size of the pickups.

If you take off the pickguard and pull out the existing pickups, you’ll see how they’re wired to the body of the guitar and how much room there is in the guitar body cavity for an additional pickup.

Some Strats have extra room and will fit a humbucker pickup. But you’ll still have to get a new pickguard to fit it properly, and depending on the pickups, you’ll likely have to rewire the pickups to accommodate the humbucker. This might include rewiring or replacing the pickup switch, as well as one or more of the volume and tone pots.

However, you can also simplify this process a bit by getting a single-coil humbucking pickup such as the DiMarzio Air Norton S, DiMarzio Chopper, or Seymour Duncan Little ’59.

Additionally, if you get a “loaded” Fender HSS Strat pickguard, it’ll already be properly wired for the conversion and you’ll just have to reconnect everything. Although if you go that route, you’ll be replacing all three pickups.

Series vs Parallel Pickups (Differences & How To Wire Them)

Keep in mind this still depends on how much room is in the guitar body itself.

As for converting an HSS Strat to an SSS Strat, a similar concept applies; a loaded SSS Strat pickguard will do the job and require minimal rewiring. But if you drop in a single-coil like a Seymour Duncan Phat Cat P90 soap bar or Mojo Tone ’59 P90, it will fit and you won’t have to replace all three pickups.

Why convert your Strat in either pickup configuration? Maybe you bought a used Strat and one of the pickups does not work, or maybe you just prefer a different sound than the factory-installed pickups.

It can be a lot of fun to experiment with your tone and style, so see what’s out there and play around.

What’s the difference between active and passive pickups, and which should I get?

Passive pickups do not require a preamp or batteries and are the type most typically found on a Stratocaster.

Do they sound different? Active pickups tend to have a higher output with less dynamic range. This makes them ideal for heavier styles of music where you need the guitars to provide that consistent and stable ‘wall of sound’.

What are the best guitar pickups for a Strat?

The best guitar pickups for a Strat depend on your own personal style, preferences, and budget.

Each of the Fender Stratocaster series has its own unique tone, so it’s just a matter of deciding which you prefer.

Don’t forget that pickups are just part of a guitar’s sound and that the rest comes down to pickup position, the strings, amp, and effects pedals you use. Even the wood of the guitar’s neck and body will affect the tone.

With that being said, it’s usually the guys who use lots of distortion in genres such as metal, punk, and rock that will get the most benefit from a humbucking pickup.

Similarly, if you want a clean and bright tone for genres like funk or jazz, an SSS configuration might work for you nicely as that single-coil bridge provides a unique type of sound that a humbucker struggles to recreate.

The best way to figure out which Stratocaster works for you is to head to your local music store and try a few out.

Don’t worry about being ‘That Guy’ at Guitar Center, that’s what their demo room is for, so don’t be shy!

Watch demo videos on YouTube and listen to guitarists whose style and tone you like, then figure out what they use.

With research and some hands-on experience, you’re sure to find a Strat with a pickup configuration that speaks to you.

Enjoyed this? Make sure to check out 5 Strat Replacement Bridges (With Great Tone & Feel)!