Reinier Klaassen
Guitar Tech
Disclosure: We may receive commissions when you click our links and make purchases. Read our full affiliate disclosure here. 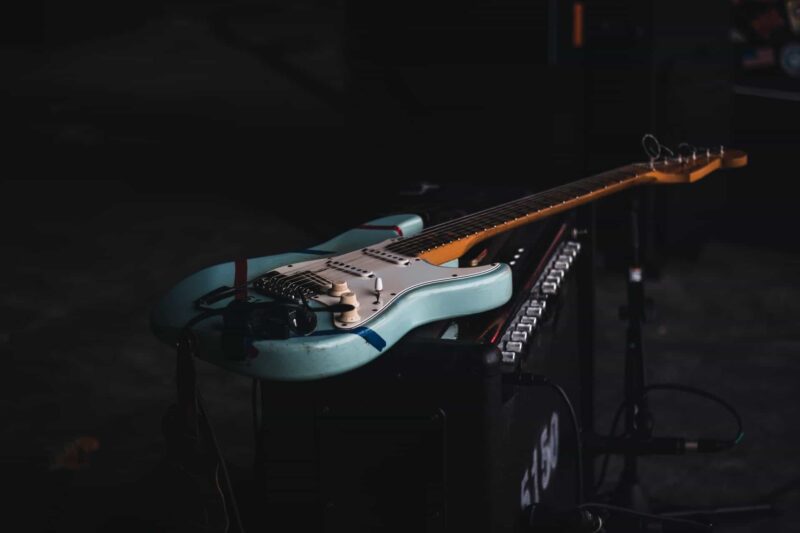 Guitarists may not want to admit it, but a stock guitar is rarely going to be perfectly suited to their tastes and playing style. Since no player is alike, everyone will like a different setup or pickup configuration.

However, some of us six-string fiddlers like to kick things up a notch by replacing parts many would consider off-limits, and bridges happen to be one of those things. They can have a big impact on the tone of your guitar, but more importantly, the guitar’s overall feel will change.

In this article I’ll talk about my top 5 bridge replacements for the Fender Stratocaster, and when you should think about getting a replacement bridge for your trusty axe.

What Are The Best Strat Bridges?

I’m going to start off with my favorite bridge, which has been on my main guitar for the past 4 years.

The affordable six-screw Wilkinson bridge sets itself apart from the rest by providing players with something that feels solid, sounds great, and most importantly, stays in tune.

The T-WVCS-C is made of a solid steel tone block, a chrome-plated baseplate, and bent steel saddles. This allows for a better transfer of vibrations, which leads to a more solid-sounding tone.

One of the other big selling points for this cracker of a bridge is the pop-in whammy bar. On a stock Fender bridge, you have to screw in the arm, which means you are not in complete control of the tightness of the arm, and it usually wiggles around in the arm socket.

The Wilkinson bridge solves this by allowing you to tighten the arm with a grub screw in the back of the tone block. Simply pop in the arm and tighten the screw until you are happy with how the arm feels when moving it around.

Because of its low price, it’s also our value pick for those on a budget. The affordable six-screw Wilkinson bridge sets itself apart from the rest by providing a player who doesn't want to spend 200 dollars on a bridge with something that feels solid, sounds great, and most importantly, stays in tune.

Since a lot of vintage guitars are out of reach for us mere mortals, we have been forced to modify our guitars to get close to the mojo of a vintage instrument.

Callaham has long been the industry standard when it comes to the recreations of vintage strat bridges. They use top-grade steel for their bridges which make for a great tone.

All bridges are hand-checked on imperfections, which means that the chances of getting a faulty bridge are very low. To me, one of the downsides of this bridge is that it has a screw-in whammy bar, but that is to be expected from a true vintage recreation.

For the price of $145, this bridge can be yours. If you’re worried about whether or not your bridge will fit your guitar, Callaham also makes a bridge of the same materials and specs for the string spacing of a Mexican strat. The Vega-Trem has been taking the guitar industry by storm ever since its creation, and it’s not slowing down anytime soon. This bridge is one of the best aftermarket whammy bar bridges out there, and for good reason.

Due to its unique construction, the Vega-Trem doesn’t require any drastic modifications to the guitar to install it. The baseplate only has four screw-holes which are wider than normal screw-holes, which allows them to fit on different screw spacings. This makes for an easy installation process.

The second thing that makes the Vega-Trem unique is its insane tuning stability and comfort. This due to its frictionless performance, which is achieved by creating a fulcrum that pivots on the baseplate.

This low friction design allows for very musical playing and tuning stability that rivals that of a Floyd Rose system. One downside of this system is that it can only be set up as a floating bridge, but if that’s what you’re looking for there’s no better option than this bad boy. Stay in tune with extreme whammy bar abuse without modifications. Up-pulls, fluttering, & smooth vibrato can be had with the Vega-Trem system.

Hipshot has been in the aftermarket parts game for a long time. They are well known for their robust machine heads, and bridges. Since there are so many two-point strat bridges out there, one might wonder what sets the Hipshot US Contour apart from the rest.

The US Contour bridge tackles the issue of wear and tear on the knife edges by using only one knife edge on the side of the low E-string and two locator pins where the high E string is.

This bridge is ideal for the player that wants something modern that’s going to perform in a very stable way but doesn’t need a longer setup than something like the Vega-Trem. The Hipshot US Contour bridge is unlike any tremolo system out there. Hardened steel pivot pins inserted into a machined brass top plate give the US Contour a bell like tonal quality and silky smooth whammy action!

The Rail Tail is Floyd Rose’s latest creation. Over the years many players have fallen in love with the classic Floyd Rose system, but getting one of those bridges on your guitar requires a lot of routing and drilling, which is something a lot of us are too afraid to do.

As a response to this problem, Floyd Rose created the Rail Tail. Simply install the fulcrum into your six screw strat, put the bridge on top of it and you’re done. A big bonus of this bridge is that since it doesn’t use knife edges there’s no wear and tear after years of abuse.

It also allows Strats with a six screw bridge system to get an upgrade without having to fill up the screw holes, which is what you would have to do when installing a Wilkinson unit.

One of the downsides of this bridge is that it needs to rest flat on the body, meaning you can’t set it up to float.

(If you’re not sure what a floating bridge is, check out Floating Tremolo Vs Non Floating (Differences Explained)) The Rail Tail Tremolo is a full-contact, dive-only tremolo designed to retrofit your existing Strat-style 6-point tremolo with no modifications to your guitar.

Why We Love It:
View Price on Amazon View Price On Guitar Center

What Bridge Should I Get?

Getting a bridge that suits your need as a player is essential. You don’t want to think about your guitar’s imperfections when playing a gig or doing a session, so having a bridge that does exactly what you want is really important!

What’s It Made Of?

A bridge’s material has a big impact on the tone and longevity of your instrument. The general rule of thumb is harder materials will transfer vibrations more effectively and result in a better tone. However, there’s some nuance to this rule of thumb, which I’ll go into.

Pot metal is often used in cheap guitar parts. It’s made of a mixture of loads of recycled metals, such as soda cans, and other metal that’s been thrown away. You can immediately hear, and feel it.

Because it contains lots of different metals, there are imperfections in the construction, which can cause dead spots. You know you are dealing with dead spots if certain notes don’t sustain and sound as loud as other notes on the guitar.

If you have a pot metal bridge it’s a wise decision to upgrade it by picking a bridge made of better materials.

Nickel is most commonly used as plating, covering other materials such as steel.

Nickel is softer than steel, which makes for a more mellow sound that can sound very musical on a bright guitar. The Wilkinson six screw bridge mentioned above is offered with either a chrome or nickel coating.

Nickel plating is most often found in recreations of vintage bridges, as that was the material that was typically used at that time.

Just like nickel, chrome is used as a plating material. Since chrome is slightly harder than nickel it’ll produce a bolder tone with a more extended low end and high end.

All 20 Types of Guitar Pedals (And What They Do)

As it’s harder than nickel it’s also more resistant to wear and tear, which is great for players that want a six screw whammy bar that’ll stand the test of time. Chrome plating typically shows up in the more modern bridges.

Being one of the hardest materials in a bridge manufacturer’s arsenal it provides you with a bright sound as well as great durability.

This material is most often found in modern bridges and some parts of vintage-style bridges, such as the saddles or tone blocks. Steel is probably the most common material of the bunch, as it’s used in both vintage and modern style strat bridges.

This alloy is most commonly found in string saddles and tone blocks. With brass being a little less hard than steel, many players find that brass provides the perfect mix of high-end and warmth.

Brass’s heavier weight also provides more body to the tone, which makes it an ideal replacement for a bright-sounding guitar.

How Much Will It Get Abused?

One of the things that many players don’t consider is that after some time the bridge will show signs of wear and tear. Especially wear on the mounting screws can cause lots of problems. When you push the whammy bar, the knife-edge rubs over the post, which will eventually cause the knife edge to go blunt.

A blunt knife edge will result in an uneven surface that contacts the post, which results in friction and harming the tuning stability.

Therefore, it is important to consider how much you are likely to use the whammy bar and adjust your needs to that by picking the right materials. If you’re going to really dig it is wise to get a bridge made of hard materials.

If you’re in the market for a Wilkinson bridge I suggest going for the chrome-plated one, as it’s likely to last longer. But if you want a warmer tone, be prepared to make sacrifices in the durability department.

Or you can experiment with putting different saddles, such as brass saddles, on the bridge to compensate for the brightness of the harder materials.

A player’s style greatly influences a player’s needs. If you’re going to use the whammy bar for some subtle pitch manipulation, you will not need a very advanced bridge.

A six screw is likely to do the job just fine. If you want to do the tricks you used to do on your Floyd Rose guitar, but you don’t want the hassle of setting it up, a good two-point bridge or the Vega-trem are probably your best bet.

That is not to say that six screw bridges can’t be used aggressively. My six screw Wilkinson bridge in combination with a Graphtech nut and locking tuners stays in tune perfectly, even after playing a whole set.

Since there are so many bridges out there, it can be quite the task to find one that’s right for you. If you need a place to start, just consider your playing style. What do you want from the replacement bridge? Do you want more brightness, better tuning stability, or more durability?

After finding out what you like and dislike, spend some time on the internet looking at customer reviews of the bridges you’re interested in. It might take a while, but when you find the bridge that suits your needs it will be worth it!

(Strat users will also want to check out our roundup of the best replacement pickups for the Fender Stratocaster!)