Les Paul vs Strat (5 Key Differences & Which Is Better?)

Producer Hive
Electric Guitars
Disclosure: We may receive commissions when you click our links and make purchases. Read our full affiliate disclosure here. 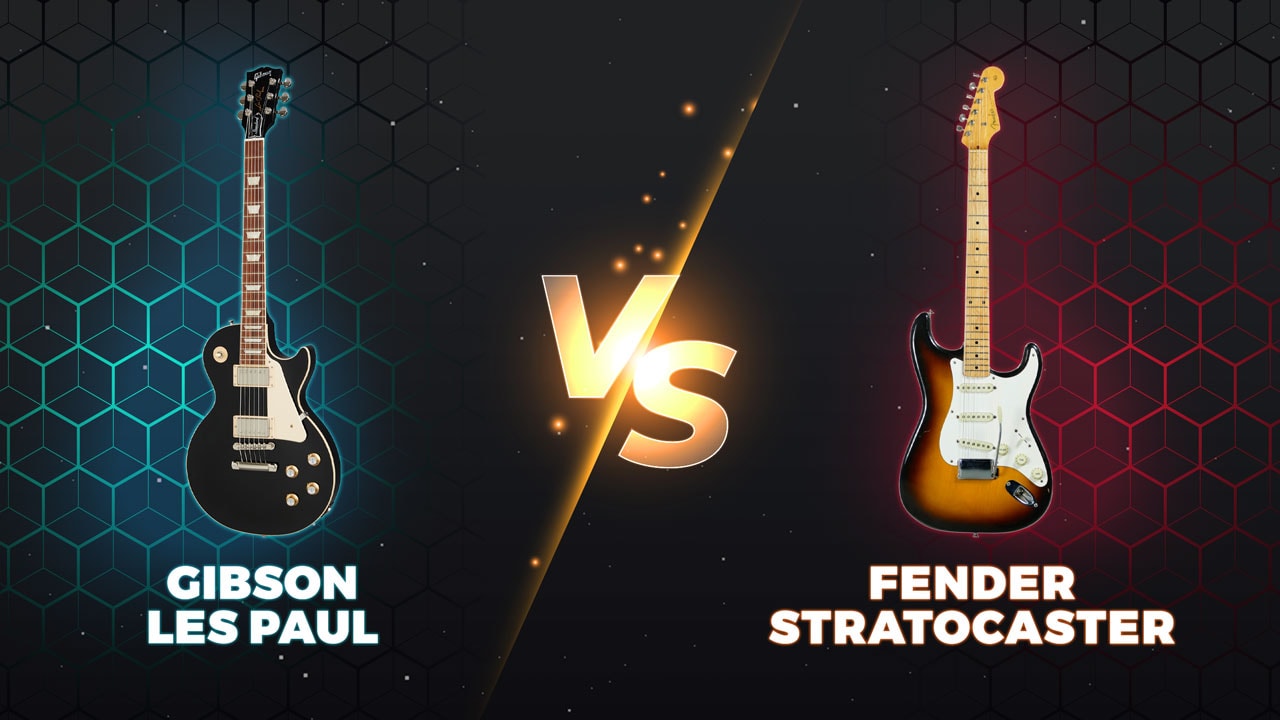 For over 60 years, the Gibson Les Paul and Fender Stratocaster have stood as titans of electric guitar design, played and loved by many players across all skill levels.

When most think of an electric guitar design, their mind will likely conjure up the silhouette of a Les Paul Or Strat regardless of whether they are guitarists, with both designs remaining relatively unchanged since their conception in the 50s.

This limited-edition Player Stratocaster HSS Plus Top maple fingerboard electric guitar puts all of the classic features of the Strat at your fingertips while adding a modern edge.

Why We Love It:
View Price On Guitar Center Check Price On Sweetwater

An Introduction to the Fender Stratocaster

The design of the Fender Strat was a collaborative effort between Leo Fender, Bill Carson, George Fullerton, and Freddie Tavares.

Making its debut in 1954 both the design itself and its implementation was like nothing anyone had seen prior, further expanding upon design elements introduced by the Fender Broadcaster and Esquire prior.

The Stratocaster was notable for numerous reasons including its futuristic double-cutaway body shape that would enable players better access to the upper frets.

Its three single-coil pickups implemented in various pickup positions and subsequently mounted to a pickguard were also a relatively new concept for the time period.

Another notable feature was the addition of the Fender synchronized tremolo, an improved design over other vibrato units on the market at the time, such as the Bigsby tremolo arm.

The Fender tremolo arm was so successful that it eventually became an industry standard for Guitar manufacturers worldwide.

One other feature amongst many that made the Fender Stratocaster stand out amongst its contemporaries was the manner in which practically every component on the instrument was bolted or screwed together in an extraordinary feat of design.

Initially, this was means for easy maintenance and replacement of any components on the instrument that may be susceptible to wear and tear but later on lead to the Fender Stratocaster becoming the most customizable instrument on the market.

Since its inception, the single-coil pickup-equipped Fender Stratocaster has found itself in the hands of countless players.

For more on Strats check out Stratocaster HSS Vs SSS (Key Differences, Which Is Better?)

A Caricature of the Gibson Les Paul

John Huis designed the Les Paul during his time as factory manager at the Gibson guitar corporation. This was along with the input of both his team and professional guitarist, Les Paul.

Les was initially granted the Gibson SG as a signature model but actually disliked the instrument, hence his name was taken off these production electric guitars whilst the team birthed this new design.

Surfacing in the year 1952, the Les Paul model was notable for numerous features that made it stand apart from its competitors of the era.

A single-cut solid body shape was graced with a maple cap. Unlike many other competitors in the electric guitars market, the Les Paul featured a set neck design that glued the instrument’s neck into the body.

As a result, many felt that the sustain of the guitar was enhanced, a trait which was further accentuated by the Les Pauls fixed bridge tunomatic system.

Despite all of the traits that made the Gibson Les Paul a desirable option for electric guitarists at the time, one feature in itself would impact the industry as a whole.

However, in 1955 Gibson Employee Seth Lover introduced the PAF “Patent Applied For” humbucking pickups, which subsequently took the guitar world by storm.

Many would agree that the PAF epitomizes the design of humbucking pickups and lays the standard on which most humbuckers are judged by since the introduction of the PAF itself over 60 years ago.

Stratocaster vs Les Paul: Which is Right For You?

So, we’ve now had a crash course in the history and legacy of these behemoths in the world of electric guitars.

Both have been utilized by many a legend and weekend warrior across decades of popular music history. Still, none of this information necessarily answers the question of which is right for you.

Breaching the question of Gibson Les Paul Vs Fender Stratocaster is not easy because both instruments are so different from each other, apples vs oranges, if you will.

Gibson Les Paul vs Fender Stratocaster is a difficult question, but maybe the best place to begin lies in analyzing the Les Paul vs Strat sound.

The Circle Of Tone

Comparing the Les Paul Vs Strat sound is a particularly easy feat as both instruments are opposites of one another.

The alder-bodied Fender Stratocaster imparts a bright tone departing the twang of its sibling, the Telecaster, for a tone many would describe as bell-like or “chimey”.

The bright tonality of the traditional Fender Strat is further accentuated by the maple neck and single-coil pickups harbored within the pickguard assembly housed upon the Strat’s double-cut body shape.

Stratocasters can be purchased with either Maple or Rosewood fretboards, with many players feeling that the Maple board Strats tend to sound brighter, and rosewood board Strats sound inherently “mellower”.

The bridge pickup is especially noted for being exceptionally bright on a Traditional Strat, so much so that it has its own dedicated tone control within the factory circuit.

Whilst on the topic of circuitry, since the 70s, many Fender Stratocasters came stock with a 5-way selector switch enabling the player to select more pickup positions than was possible on many other electric guitars at the time.

On the other hand, the Gibson Les paul harbors a deep, fat tone rich with sustain and body.

The mahogany body, set neck design, and fixed bridge are all attributes that contribute considerably to Les Pauls’s tonality.

Les Pauls can often be considered characteristically dark in nature which some players find to be a trait preferable to the brighter tonality of the aforementioned Stratocaster.

Most Gibson Les Pauls will have left the factory with Rosewood fingerboards however some examples feature ebony boards and, in some rare cases, Maple.

Since 1955 many Les Pauls left the factory with Humbuckers installed and a 3-way switch which further push the warmth associated with these guitars.

An additional attribute of the humbucker is the absence of 60 cycle hum present in many traditional single-coil pickups before the invention of stacked single coils in later decades.

All of these factors contribute considerably to the discussion of Les Paul Vs Strat sound, and a player’s own personal taste will dictate which one they prefer.

It is also worth noting that both instruments willingly accommodate distortion and overdrive, with their individual characteristics remaining intact (much the same as when played through a clean amplifier or direct setup).

Getting a Grip On Things

Now that we have touched upon the Les Paul Vs Strat sound, the most crucial subject to approach is the Gibson Les Paul Vs Fender Stratocaster feel.

As with almost all aspects of either instrument, the feel and setup are entirely different, and these characteristics can be attributed to various factors.

First lies in the neck, as this is the part of the guitar with which the player is most in contact whilst playing the instrument.

Is Guitar Hard To Learn? (10 Critical Things Before You Start)

One will immediately notice that the Strat neck profile differs from a Les Paul’s. While both manufacturers have changed and introduced multiple neck profiles over the years, the difference in feel is still apparent.

Most would agree that the neck profile of a Les Paul tends to feel somewhat chunkier and subsequently fill the hand more than the Strat neck profile. The latter may be better suited to players with small hands.”

Not only do the neck profiles of either instrument change, but so does the actual fit and finish.

The Fender Stratocaster necks are generally sanded and finished in a lacquer such as the traditional nitrocellulose finish or the more modern appointment of materials such as polyurethane.

On most Gibson Les Paul models, the neck itself will be painted before being finished and sealed, lending itself to having an entirely different feel.

On the topic of Gibson Les Paul vs Fender Stratocaster necks, it is also important to mention that both models inherit different scale lengths.

Scale relates to the distance between the guitar’s bridge and nut, with Gibson’s scale being 24.75″ and Fender being 25.5″ in length.

This may result in some players finding the Les Paul easier to play, especially those with small hands.

It is also worth mentioning that scale length will directly impact string tension, with a longer scale length inheriting more tension and a shorter scale the opposite.

Although these factors can be manipulated via experimentation with various gauge strings to counteract the influence of scale length on string tension.

The last subject we will cover in the Les Paul vs Strat discussion is that of the guitar bodies; due to their construction Les Pauls tend to be considerably heavier than Stratocasters.

Gibson’s traditional Mahogany is inherently a heavier species than the Fenders Stratocasters’ traditional Alder or Ash. In addition, many Les Pauls will have a maple cap set on top of the body, which further adds to this mass.

As mentioned previously the Stratocaster’s elegant double-cutaway will lead to easier fret access which may aid those who possess smaller hands however some may find the sculpted neck heel of the Les Paul more straightforward to get around.

Another significant difference is that Strats inherited a belly cut on the rear side of the instrument whilst the back of a Les Paul is a slab, unlike its arched top.

This means that you may find the Stratocaster more comfortable to hold while sitting or standing, while others may find the Les Paul more substantial.

In this dive into the world of Les Paul Vs Strat electric guitars, we have traversed the origins, roots, and legacy of these famous instruments.

Which is better suited to you all lies within your preferences as a player, and the only way to decipher which is the one is to take the time to try both.

Before closing this chapter, it is also worth acknowledging that in the modern age, the gap between the Les Paul and Stratocaster is somewhat smaller than it was during the initial decades following their inception.

With the dawn of the Superstrat in the 1980s, Strat-style guitars with Humbucking pickups have become the norm for those who desire them.

There have also been plenty of Les Pauls with vibrato bars and coil-splitting “or tapping” modifications, enabling them to achieve some of the single-coil tones characteristic of their Fender competitors.

Regardless, despite these small steps towards unity, both instruments’ individual characteristics and sonic traits still stand very much apart.

If you have trouble deciding which one to employ in your arsenal, why not consider adopting both?

Before you go, consider checking out our post on Fender Stratocaster vs Telecaster: 5 Key Differences