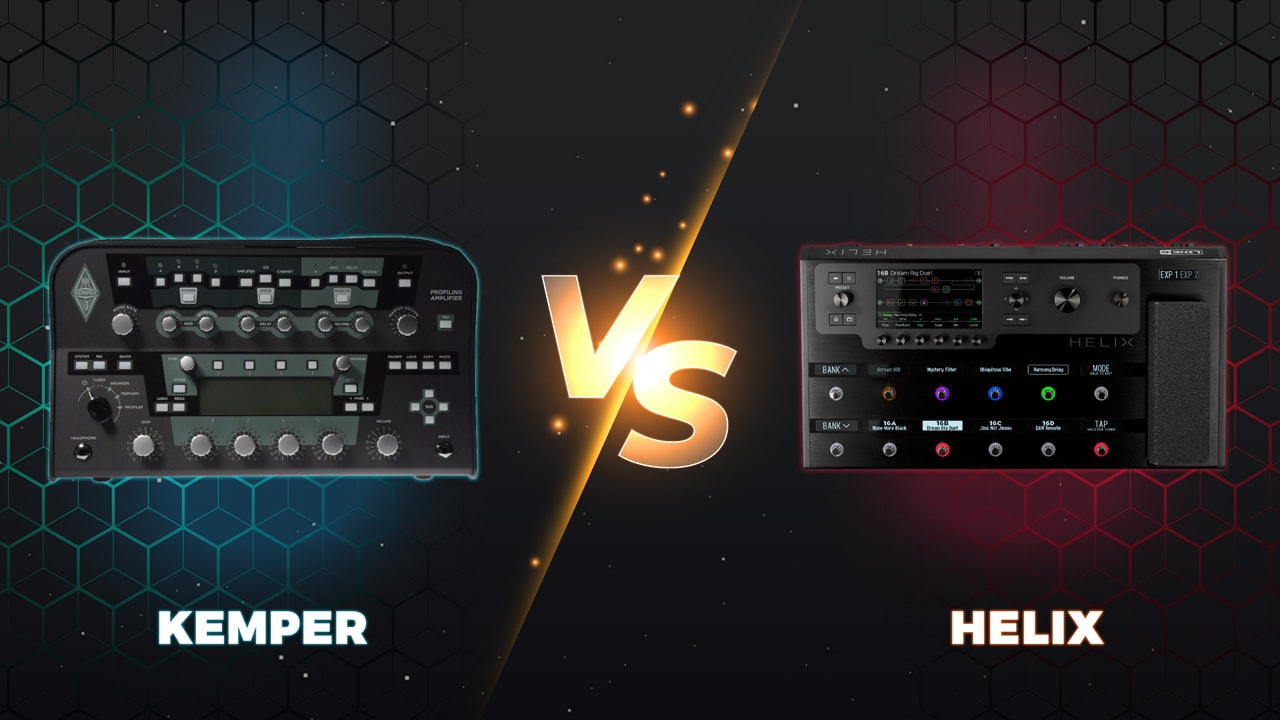 Liam Engl·
Amplifiers
Disclosure: We may receive commissions when you click our links and make purchases. Read our full affiliate disclosure here.

We’re currently in the golden age of amplifier modeling, the sound quality and feature list of some high-end units we use nowadays would have been considered some kind of crazy sci-fi technology just a few short decades ago.

It’s important to keep in mind that companies and consumers alike were slow to warm up to digital technology (and for good reason, remember the first-generation Line 6 POD or the Behringer Vamp? Yikes!).

Now, thanks to bands like Periphery and Meshuggah normalizing the use of digital modelers in a professional setting, the flood gates have been opened.

Companies have been going hard over the last decade to make feature-rich hardware modeling units with tones that can rival that of any tube amplifier.

These two units, while ultimately gunning for the same goal of being an all-in-one amplifier modeler, effects processor, and recording unit. They get there using slightly different methods: The Kemper Profiler Stage gives you all the performance power of a full-size Kemper rack or toaster unit in a sleek and streamlined pedalboard format.

Like many other units that have tried to implement some kind of ‘tone match’ or ‘EQ match’ technology, nothing has been able to come close to Kemper in terms of accurately re-creating the sound of a real amplifier.

This whole process of storing a real-life guitar rig in digital format that you can play through the Kemper, without any compromise in tone, is extremely appealing to home players and touring musicians alike.

You can capture that guitar tone you used at the studio and quite literally take it away with you.

This also gives the Kemper amp an ‘infinite’ quality to it, where 5, 10, 20 years down the line we’ll still be getting profiles of the latest and greatest amplifiers. Equipped with Line 6's HX modeling engine, Helix will let you hear breathtaking models of modern and vintage amps, cabs, mics, and effects — all designed to sound and feel just like the originals.

Line 6 have a long history as innovators in the digital modeling space, popularising the format with the original POD and Toneport interfaces.

This then progressed to the POD HD series, then the X3 series. Yet, as much as they wanted to, they never seemed to really attain the prestige that something like the Axe FX from Fractal Audio or Neural’s Quad Cortex had.

But then along came the Helix, which put them up there with the big boys. Utilizing a completely re-worked modeling technology that, for the first time, allowed it to accurately produce the sound of real amplifiers.

Just like the Kemper, it’s designed to be an all-in-one unit. So is chocked full of effects, amps, cabs, and a substantial I/O suite.

So, you can take just this one unit with you being confident it’ll accommodate any scenario you can throw at it.

This can be a tough concept to grasp if you come from using any kind of modeler which has amplifier models already baked into the unit.

The Kemper doesn’t really have a particular sound or overarching tonal quality to it. Its’ job is to simply take a tone that you or someone else has created and reproduce it as accurately as possible.

This can be a double-edged sword as if you (or whoever made the profile) achieved a fantastic tone using a real amp/cab/mic when the Kemper profiles that tone, it’s also going to sound fantastic!

However, if you’ve made a bad tone, guess what, the Kemper will sound bad too.

World-famous mixing engineer Andy Sneap has gone on record saying that when a profile is correctly captured, he cannot tell the difference between the Kemper and the real guitar amp.

There are plenty of fantastic profiles out there, both free and paid for, which are made by some very talented producers and audio engineers. You’re not going to be left short on incredible sounding profiles, that I can guarantee!

Unlike the Kemper, where it’s predominantly users who create their sounds, Line 6 uses the more traditional method where the company has profiled nearly 100 amplifiers by themselves and loaded them into the unit.

All the amplifier models sound pretty good! There’s definitely still a little bit of that signature  ‘line 6’ quality to them which can manifest in some unwanted top-end fizz, particularly on high-gain models.

Nothing a quick EQ can’t solve.

But by and large, the amplifiers on offer sound wonderful and are very comparable to their real-world equivalents.

The Kemper comes out a little on top here, there is some real magic happening within their profile technology, and if you’re looking for the most authentic tones possible, Kemper has you covered!

‘But I don’t own any real amplifiers, is the Kemper useless for me?’


Absolutely not! Kemper has their own ‘rig manager’ software where users will upload their own profiles that you can download for free.

As of the writing of this article, there are nearly 19,000 profiles of every kind of amplifier you could ever want available for download.

The rig manager software works on Windows and macOS. They have more recently released app versions to use on smartphones/tablets.

It allows you to store, organize and tweak your profiles and tones.

However, it needs to be said that this software is not the most robust thing in the world.

Between the poor UI, general jank feel, connectivity issues, and the fact I have had to re-install the Kemper drivers multiple times due to updates breaking something.

I think there’s a long way to go before Rig Manager can compete with Line 6.

Line 6 has had many years to pull ahead of Kemper on the software front. And boy does it show.

It has a sleek and intuitive UI that anyone who’s used Line 6 products of old will feel right at home using.

A really robust piece of software that will make managing all your tones a much more enjoyable process! Well done Line 6!

The Kemper has a huge selection of inbuilt effects which you load up as stompboxes in your digital guitar rig.

It has every kind of delay, reverb, and modulation you can imagine. The pitch shifter effect is particularly handy if you need to change tunings in a pinch but don’t want to retune.

Either way, you’ll be hard-pressed to find an effect the kemper doesn’t have.

It’s also worth noting that Kemper were the creators of the Access Virus synth, one of the most popular synthesizers of all time! So you can trust that they know what they’re doing here.

Kemper also frequently updates their inbuilt effects too, just recently adding the ‘kemper drive’ stompbox which emulates all those classic tube screamers such as the Maxon OD808, and even some newer models such as the Precision Drive from Horizon Devices.

The Helix is also no joke when it comes to the sheer volume of effects available.

What perhaps allows the Helix to pull ahead of the Kemper here is not that it has a particular effect the Kemper doesn’t. But in that, it facilitates far more complex signal routing.

Want to have a parallel reverb that bypasses our compressor? Not a problem! Want a delay that distorts over the top of a clean tone for some kind of post-rock type sound? Not a problem!

So for anyone who likes to create those more elaborate wet patches, the Helix is one to consider.

The Types of Kemper and Helix Hardware

Both Kemper and Helix have a plethora of I/O regardless of which hardware unit you buy, whether for recording or playing live, both of these units will any scenario you can throw at it!

The core profiling technology, effects, and rig manager software (which we will cover later) are universal across all versions of the Kemper.

But there are currently 3 different hardware variations of the profiler available, here’s a quick look at how they differ:

Much like the Kemper, the core amp modeling technology is universal across all hardware variations of the Helix. The differences primarily come down to form factor and I/O.

The Kemper has superior modeling technology which makes it perfect if you are looking for the most authentic and realistic ‘singular’ tone you can get.

It’s also ‘future proofed’ in a way the Helix is not and will be relevant for years to come.

On the other hand, the Helix provides a better user experience and feature set, between the routing options and a far more robust software suite.

This is great for anyone who values convenience and usability.