4 Types Of Audio Compressors & When To Use Each Of Them 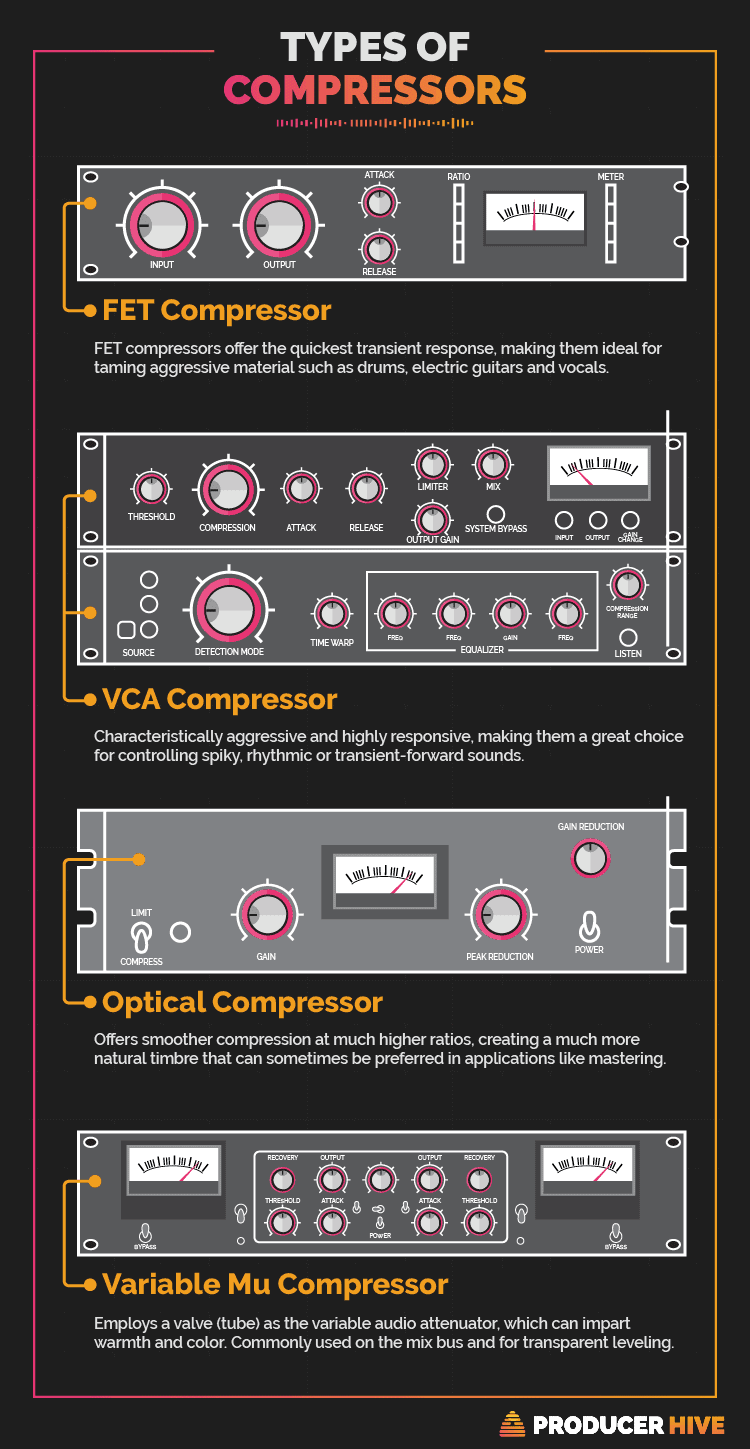 FET, VCA, Optical, and Variable-Mu are four classifications of audio compressors. Each has different characteristics due to how its gain reduction circuits react to the signal being passed through them.

Aside from deciding HOW to use compression, as you delve deeper, you’ll start to think about WHAT compressor to use. As a general rule, compression affects the dynamic range of a track or instrument. However, there are several types of compressors that all operate differently and with different qualities.

Compression came about in the 1930s as a way of effectively transmitting audio signals from radio stations to their listeners without causing distortion for any other unpleasant sounds. It turned out, however, that compressing this signal made the sound punchier and louder.

These early compressors were much more primitive than the ones we see today, with very basic ‘in and out functions. As time went on the sound of compression became more desirable, and audio engineers started to utilize this idea of dynamic range compression to improve the sound of their recordings.

Fast forward to the modern day and you’ll be hard pushed to find a commercial track without compression on.

Compression nowadays is almost an instrument in itself. Whether you’re using a physical piece of outboard gear or a plug-in emulation, the sound of compression varies.

Types Of Compressors & Their Characteristics

What is FET Compression?

What Is FET Compression Good For?

As a general rule, FET compressors slowest attack time tends to be faster than other compressors such as a Variable Mu. FETs give a punchy tone and sound great across the board, whether it’s drums, vocals, or guitars you’re recording, so it’s no surprise to see at least one in most pro studios!

Their sound tends to be rich with a lush distortion when driving the compressor. The Universal Audio 1176 is arguably the most famous FET compressor and can be bought as a rack unit and plug-in form.

Softube FET Compressor– Save 48% at PluginBoutique

The Softube FET Compressor plug-in is a digital model of a classic FET design. It gives a warm sound whilst keeping vocals and drums punchy. Its intuitive controls mean it’s also great for sidechaining and parallel compression.

Analogue Obsession’s Fetish is a FET style compressor, with a fast attack time. It’s design means it’s really easy to use if you’re just starting out. It’s also compatible up to a sample rate of 192khz.

What is VCA Compression?

A ‘Voltage Controlled Amplifier’ offers the most aggressive gain reduction, making it a good choice if you’re trying to keep in check any loud transients or spikes in volume.

Technically a VCA isn’t an amplifier, rather it uses an attenuator to reduce the volume when it’s fed a certain level of voltage.

VCAs are generally suited to your workflow if you’re trying to tame any intense peaks in your track due to its snappy response,  however, it won’t be as suited to averaging out the level of a song as a Variable-Mu or Optical.

The SSL G Series is one of the more famous versions of a VCA compressor. This can be bought in outboard form or a more cost effective plug in version SSL G channel strip by Waves.

The SSL G Channel Strip is modeled on the classic Solid State Logic SL 4000 console. The G Channel Strip can take a little while to get used to, but its results are worth the time getting to grips with it. It also includes EQ controls, try using some of their presets to start with and tweak from there.

The Acustica TAN is a free VCA-style compressor with an easy-to-use interface. This model includes a ‘ShMod’ (Shape Modulation) function, which allows you to tweak the attack curve, giving you an added level of customization to the compressor’s behavior.

What is Optical Compression?

An Optical Compressor (or Opto-Compressor) uses a light source to control how much gain reduction is applied.

The speed of light is extremely fast, but an Opto compressor is relatively slow and smooth. Depending on the level of the signal, an internal light bulb will start to glow, getting lighter with the more signal it receives. Because of this, an Opto compressor works off the average signal received.

You wouldn’t get a great result trying to control short, sharp transients in the same way you would with a VCA for example, but you would be able to create a smooth compression at much higher ratios. The smoother reaction creates a much more pleasant sound as the signal won’t be dramatically squashed.

If you’ve ever seen ‘Peak’ and ‘RMS’ options in your DAW, think of an Opto as a compressor that reacts best to an RMS signal.

Your RMS display averages out the signal coming through, whereas Peak will display your peaks. In this way, it’s easy to visualize how an Opto works.

Opto compressors can add an element of coloring to your sound as well. Check out the Joe Meek range of Opto compressors. Meek was a pioneer of using compression as an ‘effect’, and aside from having a very eccentric history, he produced some great pieces of gear.

The Waves Renaissance Compressor is a smooth all-rounder. It has easy-to-use Vintage Opto and Electro compression modes, which add warmth to your vocals or instruments.

The Blockfish Channel Compressorcomes with an Opto and VCA function, which is great if you are just starting out and want to A/B the two to hear the difference. Its design is easy to understand and once you’re used to it you can take the front plate and make your own adjustments to its circuit board.

A variable Mu (or tube) compressor is one of the oldest compressor types.

A simple way of thinking about a Variable Mu is that the louder the signal, the more compression the unit will add. This type of compression relies on the tubes themselves to control the gain reduction, and therefore, the process tends to be relatively smooth.

What Is Variable Mu Compression Good For?

Because of the less aggressive characterizing of a Mu, it is suited to situations where you need to equal out your source rather than tame your loud transients (in which case a VCA may be more suitable).

These types of compressors can add a bit of color to your mix but also help level out thinner-sounding instruments as they add a certain amount of warmth suited to instruments such as guitars or drum overheads.

The slower attack time on a Variable Mu can help ‘glue’ your track together, creating a much more balanced and smooth mix.

Check out the Fairchild 670 for an example of a great Variable Mu.

Sonimus TuCo Compressor – Get it at Sonimus (Retails at $74)

The Sonimus TuCo Compressor is another great all-rounder suitable for mixing and mastering. Much like an analog Variable Mu you’ll notice subtle reductions at low levels with a punchy tone when you crank up and start to drive the compressor.

The Klanghelm MJUC JR is a great first step into compression plug-ins. Klanghelm has a good reputation, and the MJUC JR showcases why. Great for intense pumping effects but also with the ability for subtle and gentle compression, this is an excellent addition to any engineer’s collection of plug-ins!

If you’re just learning the basics of compression, then don’t get too bogged down in the finer points of each compressor, but try to bear in mind the sound you’re going for or the instrument you are recording.

It’s always worth comparing the characteristics of different compressors, there are no black, and white rules, so experiment and see what results you get. Even if it doesn’t sound great, it’ll give you a better insight into what compressor suits what job.