The Basics Of Magnetic Tape Recording (Parts, How It Works)

Jasmine Mills
Ask The Hive
Disclosure: We may receive commissions when you click our links and make purchases. Read our full affiliate disclosure here.

Before the days of digital audio workstations and quick editing with a click of the mouse, recording engineers would use magnetic reel-to-reel tape recorders. Learning to use a tape machine is not a primary goal for many aspiring audio engineers, but it’s beneficial to learn its basic concepts at the very least so you can appreciate where the technology in your DAW came from.

In this article, you will learn…

How Does Magnetic Recording Work?

Magnetic recording is based on the principles of Faraday’s law of electromagnetic induction. Take a piece of magnetic material, wrap wire around it to form a coil, then bend the material into a donut shape. Just don’t let the very ends touch – make sure you leave a gap.

When using your tape machine, you are using the unique medium of magnetic tape to record and play back sound. The parts of magnetic tape include the magnetic coating, the base (aka substrate), and the back coating (this was added as tape evolved).

The magnetic coating is a mix of magnetic particles, lubricants, stabilizers, the binder, and magnetic pigment. Magnetic particles retain the magnetic orientation as the tape passes the headstack. They start out as tiny iron oxide pieces and are then crushed into powder.

The tape’s base is the sheet where the coating mix is applied. Different materials have been used throughout time: paper, cellulose acetate (CA), polyvinyl chloride (PVC), polyester aka polyethylene terephthalate (PET or PE), and polyethylene nap phthalate (PEN). The base is also covered in thin layers of primers. The material used here can significantly affect the tape’s performance.

The back coating was added to improve tape handling. Often made of carbon black, it improves winding properties, removes electrostatic charges, and allows the tape to be packed tight enough so it doesn’t fall apart.

For open reel tape machines, the tape will be wound around a tape reel’s hub, forming a tape pack, with the tape being protected by flanges on the sides. 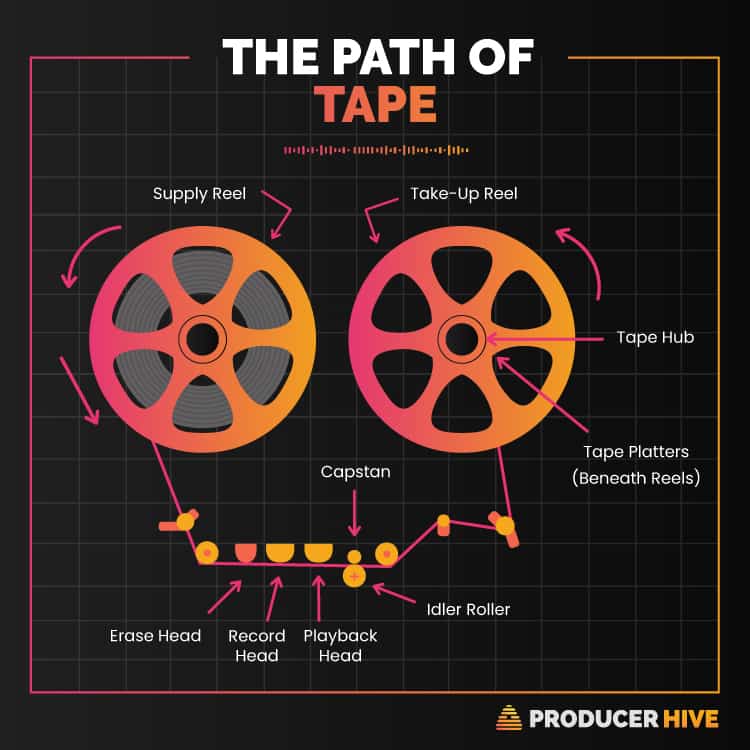 We’ll just focus on the important parts to start out with. Let’s start with the transport mechanism. It’s made up of a capstan, idler arms, a pinch roller, tape guides, servos, brakes, and tape lifters.

The capstan(s) are rotating steel cylinders that are powered by a motor to move the tape past the tape heads. It works with the pinch roller to maintain constant tape tension.  Some machines have a pinch roller, a free rotating wheel that presses against the capstan while the tape is playing and this is usually made of rubber.

Tape guides, near the tape heads, are stationary posts that keep the tape at the proper height.

The supply reel holds the tape before it passes the tape heads when playing, recording (non-reverse) or fast-forwarding. The supply servo/motor zips the tape back in fast rewind and maintains tape tension during fast forward. The take-up reel works the opposite way with its own motor – tape ends up here after passing the tape heads. Both of these reels have brakes to quickly (but gently) stop the tape.

There is something called cue mode (also known as stop editing), usually a button that says “cue”, that retracts tape lifters, so the tape touches the heads even while fast winding. It allows one to quickly hear the recording to get an idea of how far along they are in the tape. Sometimes a control knob makes the tape move forward or backward at varying slower speeds.

Other editing modes include dump editing. Dump editing will allow one to play the tape, but without winding tape to the take-up reel. Instead, larger tape sections can be played right into the garbage!

The transport mechanism is controlled by the transport controls (play, fast-forward, rewind, stop) on the tape deck and on the remote controller (if connected).

A very high-frequency alternating current (AC bias) is sent to the erase and recording heads. Magnetic materials have magnetization or B-H curves (magnetizing forces vs. resulting magnetism/domain alignment). Magnetic material that hasn’t been magnetized yet has an almost linear initial magnetization response, but prior-magnetized materials do not.

Tape’s B-H curve is very non-linear due to hysteresis. A reversal of the magnetic polarity will result in its magnetization value crossing over the zero line. But hysteresis means the applied magnetic force has to reach a threshold before the tape’s particles start changing magnetic alignment. So there is remaining magnetism on the tape after it leaves the tape head’s range of influence, meaning the reproduced signal without AC bias is nonlinear and may be distorted. 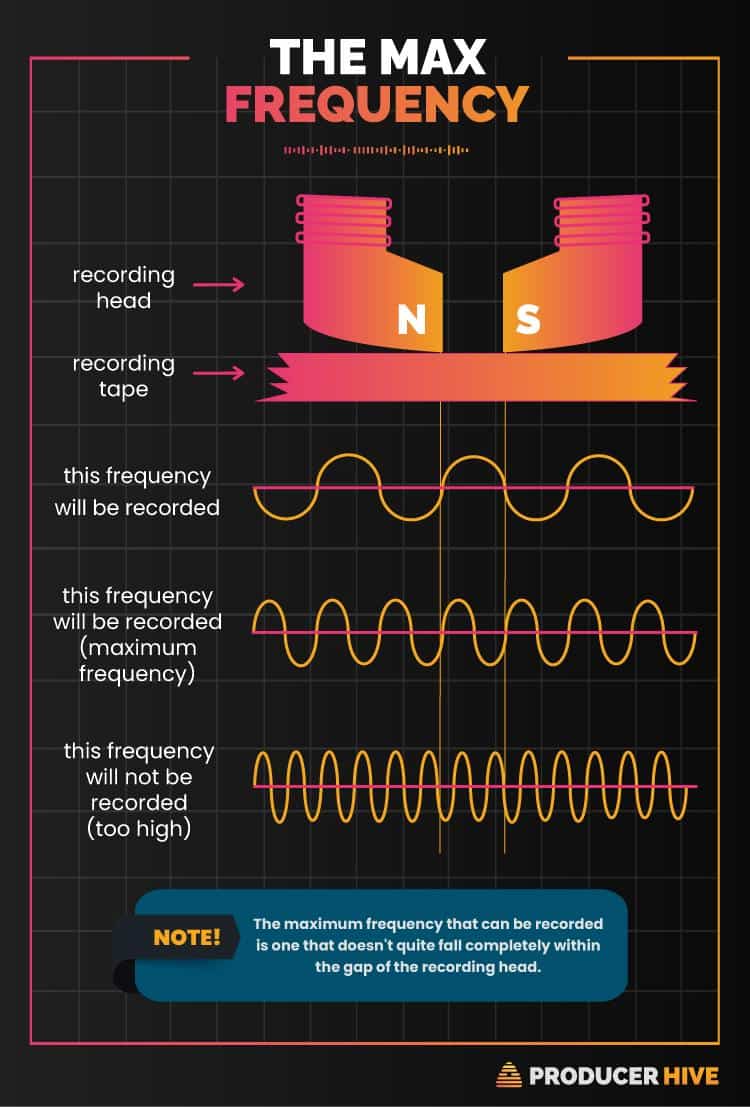 For the most part, the repro head doesn’t respond to most of the super high-frequency AC bias signals but does respond to the original audio. At lower levels, the repro may respond to the bias, necessitating the use of a bias trap to prevent bias tone from getting through.

After AC bias is applied, the audio recorded onto the tape has a more linear magnetization function due the audio signal riding on top of the bias. Now, anytime the audio signal has to reverse magnetic polarity, it won’t have to cross the zero line where the hysteresis occurs.

The AC overbias setting is a compromise of balancing these two extremes alongside the tape speed, tape-coating’s relative dimensions, record head gap distance, and wavelength of the audio being recorded.

These C-shaped metal pieces determine what happens to the magnetic particles in the tape. There are three heads that make up the headstack: erase, record/sync, and repro. Since the middle tape head has both the ability to record and playback, it’s referred to as the record head when it’s recording and the sync head when it’s playing back.

The erase and repro (reproducing) heads are self-explanatory in their functions. Each tape head has a narrow gap which the tape goes past.

When recording or erasing, the erase and record heads each have a coil of wire wrapped around a metal core. Current is run through the wire, generating a magnetic field at the gap. When monitoring from the sync or repro head during playback, the gap detects a moving magnetic field, generating a current in the wire. Smaller and cheaper tape machines may only have 2 tape heads: one erase and one record/playback head. For now, we’ll address a setup for a 3-head tape machine.

Blank tape has unaligned magnetic particles and domains. They point in random directions since they are unmagnetized. All of their individual magnetic fields cancel each other out so there’s a super small amount of magnetic flux. After audio is recorded on it, the record head’s flux polarity causes (via induction) the magnetic particles to align accordingly.

The erase head does exactly as the name implies. Its gap is wider than the ones found on the erase and record/sync heads and sometimes it even has two gaps. A very high frequency is fed into it while recording so the magnetic polarities of the tape’s particles rapidly flip back and forth.

When tape leaves the erase head’s magnetic field’s reach, the tape’s particles, on record enabled channels, will have random magnetic polarities and be unmagnetized. Some cheaper tape machines use a permanent magnet instead to erase the incoming tape while recording.

The record head’s gap is wider than the repro head’s. A current (both the recorded audio and the AC bias) is fed through its coil of wire. Louder audio means more current is sent to the record head, resulting in a stronger magnetic field at the gap and more magnetization of the tape particles.

Tape with prior-recorded audio (aligned magnetic particles), has magnetic flux. As it moves past the repro or sync head, the flux’s rate of change gets detected by the tape head, and then is induced as a proportional voltage in the coil of wire.

Selecting the sel-sync/sel-rep option corresponds with the signal at the record/sync head (they are one tape head). What is heard depends on the record status (safe or armed) and whether the tape machine is playing, stopped, or recording.

This is why there is a separate repro head – it allows one to monitor what has been recorded to tape instead of the audio entering the machine at the input point. This is especially helpful while laying down initial tracks.

Repro monitoring is designed exclusively for playback. The repro and record heads have different physical and electronic properties which affect the sound quality of the playback. The record head is optimized and designed for recording, not playback. It also has a limited response to lessen the crosstalk between channels when overdubbing.

This rectangular aluminum or steel block, usually mounted over the tape heads, is in the shape of one concave groove that holds the tape in place. The thin, deeper grooves across the large flat groove are for splicing.

If the machine has a separate counter for the tape time and the locate time, most likely they have separate buttons that will reset the current tape time as the designated zero starting time, as well as a button that resets both to zero. There are also often ways to reset the locate readout to be the same as the tape readout.

A locate time function can quickly wind the tape back to a user-specified point on the tape. The time may be stored by pressing a “set” button at the desired time during playback, or it may be entered with a numerical keypad (all this depends on the specific tape machine you are using).

Many tape machines have a rehearse feature that enables practice punch-ins without destructively recording. Once audio is truely recorded onto magnetic tape, there’s no undo button to get it back. Consult the machine’s manual on how to rehearse any sort of punch in/out to avoid accidental erasures.

Varispeed, or variable speed, is exactly what it sounds like, varying the tape speed during playback. Slower speed means audio plays back at a lower pitch, and higher speed plays back at a higher pitch. This is used to correct tunings during overdubs, alter tempos, change a song’s key, or change the song’s running time.

You can also play with the varispeed for creative effects. Ween and Beck made extensive use of this technique in the 90s, recording their voices at vastly different speeds for a bizarre effect.

Recording with analog tape machines may not be the primary method anymore, but they are still commonly used to add the unique “tape sound” to things. This means nonlinear frequency response changes, tape compression, and saturation of 3rd order harmonics. Many professionals also route their projects through tape machines during the mixing or mastering stages.

Once you get a grasp of the fundamental concepts, you can take the deep dive into more of its amazing and inherent quirks and use tape machines in your own compositions!

(If you also want the “tape sound” in your DAW, check out our roundup of the 5 best tape emulation plugins on the market.)