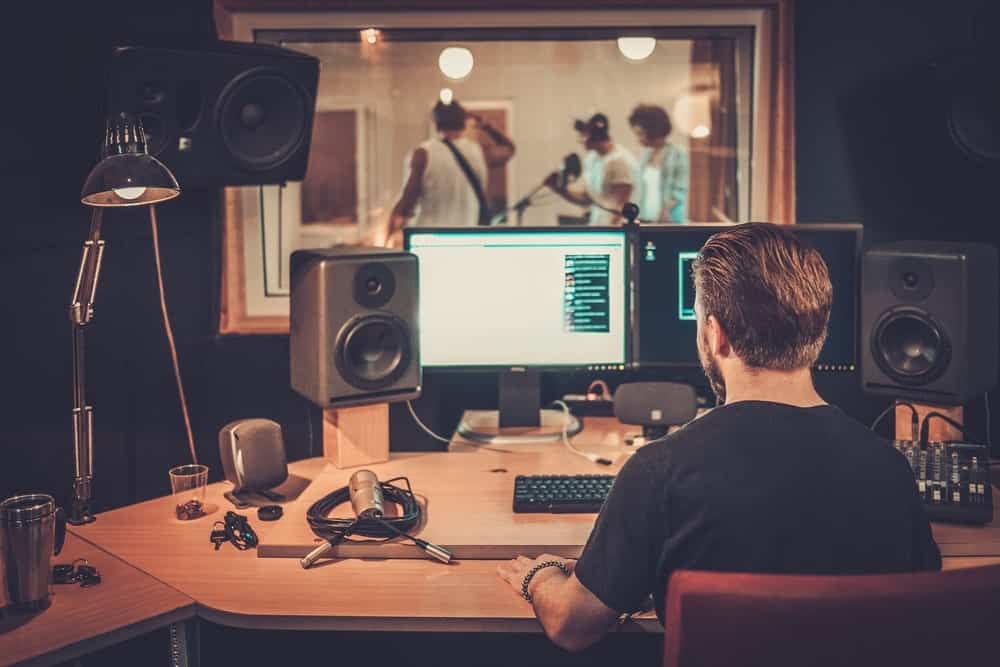 Below we’ll look at live recording vs overdubbing, how these techniques can be applied (and even used together), and how multitrack recording can be used in both.

The Difference Between Live Recording vs Overdubbing

Overdubbing is the practice of recording over existing instruments when making a song. For example, you might be recording a bass part over a drum track, then the guitars will be overdubbed once the rhythm section is complete. In both cases, overdubbing is used to build a song “piece by piece”.

Live recording typically captures all instruments simultaneously in a single performance. This doesn’t just apply to live albums by touring acts, there are also plenty of studio albums recorded this way too.

That’s the quick version, now let’s dive into the details…

With live recording, you will typically have all performers in the same room, stage, or studio space playing together in time with each take. Ideally, each instrument or instrument group will be separately mic’d up and recorded on a different track in the project (this is multitrack recording, which we’ll look at later).

It doesn’t matter if the current tracks, recording at that time, are intended to be in the final mix. It also doesn’t matter if you intend to edit, overdub, or mix everything later. At that point in time, live recording is being used to capture a performance.

Live recording was the only method of recording up to the development of sel-sync recording by Ampex in the 1950’s. Before this, the best that could be done in terms of “overdubbing” involved at least two separate machines. The playback on one machine was routed to another machine that would be recording both the playback and everything being recorded in that take.

Overdubbing is an approach that builds up a song “piece by piece” as new parts are recorded on top of existing audio. Usually with this approach, one part is recorded at a time, and the song is built up with each successive take.

Even if you’re starting on a new song and are only recording against a click track, if you’re not recording all the instruments at once then you are not doing a proper live recording of your song. If you find yourself recording one (or a few) parts at a time when making your song, then you have taken the overdub recording approach.

Sel-sync recording gave tape machines the capacity to monitor and record at the same time, letting the musicians punch-in or overdub over previously recorded tracks, as well as record new tracks in time with the prior-recorded material. Many took advantage of this new feature to record a section until they were satisfied with the take – a luxury that had not existed up to this point. Then when digital recording took off, the possibilities became endless.

Live recording is more “accident-prone” for a few obvious reasons. Your entire song is being captured in a single moment, and fixing mistakes is much harder. You need to be strict about how you organize your recording session and the musicians involved.

So why do we use live recording if it’s so…fragile? Simply put, a tightly rehearsed band sounds more lifelike, spontaneous, and human when recorded. This is not to say that overdub recording can’t be all those things, it just takes a lot more time and energy to get there. At the very least, building a song with live recording is much quicker than overdubbing assuming you are able to get a good take in the time you have booked.

If you are recording a live performance that involves an audience, there literally are no second chances. Mistakes will be included in the recording. Any audible feedback or loud noise will get picked up in the recording. This is bad for genres like classical music where there are many rests or sections with quieter instruments playing.

Getting “the take” for a live recording can take an eternity. One take may be perfect except for a single minor hiccup in the bass while another may have a great drum solo that’s hard to let go of. A poorly rehearsed group will take forever to get a satisfying take that everyone is happy with.

Financially, it’s better if the group tracks everything they want to in one session. Extra sessions mean more planning, scheduling, traveling, and money.

Preparation for the session is as much work as the session itself. Planning for things such as supplies (food, audio equipment, first aid, and other tools) has to be addressed before the session starts. The staging of the musicians in the studio live room, iso booths, and sometimes control room, needs to be discussed between the musicians and engineer beforehand.

Microphone bleed will occur in live recordings unless you’re recording in acoustic isolation with one microphone. Microphone bleed is when the sound from one instrument is picked up by the mics for the other instruments – ideally only the mic facing the player should be recording that particular instrument. Drums are notorious for this as they are so loud that they will get picked up on a vocalist’s singing in the same room.

Lucky for many, overdub recording removes the majority of these problems…

With overdub recording, all of the musicians do not need to to be in the same session, or even the same location. The drums can be tracked at a studio with a specially built live room and the vocals can be tracked at a home studio. This comes in handy when working with musicians with limited availability. It saves time and money if the group uses expensive studio time only to track certain instruments or vocals (versus the whole song).

Mistakes can be easily overdubbed in isolation to the other tracks. So there will be much less pressure to get each take right when working against time with the other musicians. Since the overdubbed tracks were recorded in isolation, it’s easier to edit the individual tracks against the rest of the mix.

Since the session usually doesn’t take up massive amounts of studio space and equipment, overdub sessions free up opportunities to use beloved audio gear that the studio might only have in limited supply. For example, this lets an engineer use the same warm vintage microphone on all the singers, even if the studio owns only one.

With overdubbing, mic bleed issues are non-existent or minimal at worst. The most you usually hear is between different drum kit microphones and on different spot microphones. Less mic bleed issues allow more freedom in how the performer can be mic’d. It also allows the engineer to turn the microphone preamp higher without fear of clipping every time a drum bleeds through, and eases individual track mixing.

Getting The Best Of Both Worlds (Hybrid Recording Methods)

These days, we have the luxury of using both approaches with ease. We get to enjoy the benefits of both live recording and overdubbing, and when we use them together, the drawbacks are effectively canceled out.

Open-Back vs Closed-Back Headphones (Pros, Cons & Which To Get)

So this means you can record a few takes with your band present, knowing you can overdub and edit later thanks to multitrack recording. You still get the organic “live in the room” feel of live recording, but any mistakes that occur are no longer permanent.

Here’s a description of a common method of recording popular music. You’ll notice that it employs the use of both live and overdub recording methods.

Quick Example of a Hybrid Approach

The rhythm tracks (drums, bass, rhythm guitar, percussion, etc.) are recorded live first. This could be as small as specific sections, to the entire track. Then the melodic elements can be added on top.

The order in which the instruments are recorded is up to you at this point. Where possible, do live recordings that group a number of instruments together. For example, you may want both your rhythm and lead guitarists playing at the same time. Record a few takes until you are sure you have enough material – remember that mistakes can be edited out because we are taking a hybrid approach.

Repeat this process until you have all the parts you need to build your song. Now you will be arranging and comping the recordings, choosing the best take for each instrument in each section.

Using a click track technically means the basic tracks (rhythm tracks) would be considered an overdub. But of course, the click never makes it to the final track!

This allows for easier comping and provides a metronome to keep the tempo. Some may attempt to record without a click track which makes overdubbing very difficult. This might be fine for ambient or noise music, but for most popular styles, timing is too important.

Is One Better Than The Other?

While a good chunk of the music industry is using overdub recording, there are still scenarios where live recording is the better option. Any classical, jazz, or acoustic instrumental ensemble tends to record better live.

The musicians in ensembles are used to performing with each other- orchestras have leaders for each section and they all follow a conductor. Having musicians record in isolation from one another usually takes the organic feeling of the music. Even with overdubs, instrumental sections are usually recorded all at once.

The current popular music industry is after a refined sound with flawless tempo and pitch. Because many new and professional musicians try to emulate contemporary recordings, many of them use overdubbing in their music production process, but may not even think about it.

In my opinion, the best method of recording is to use a hybrid of both in order to get all the benefits of live recording and overdubbing. Where possible, try live recording with multiple musicians for an organic feel, then overdub later instead of obsessively aiming for the perfect take. Utilizing both approaches like this saves time and money, and will make the process of completing your song a whole lot easier.