Rodrigo Sanchez
Songwriting Tips
Disclosure: We may receive commissions when you click our links and make purchases. Read our full affiliate disclosure here. 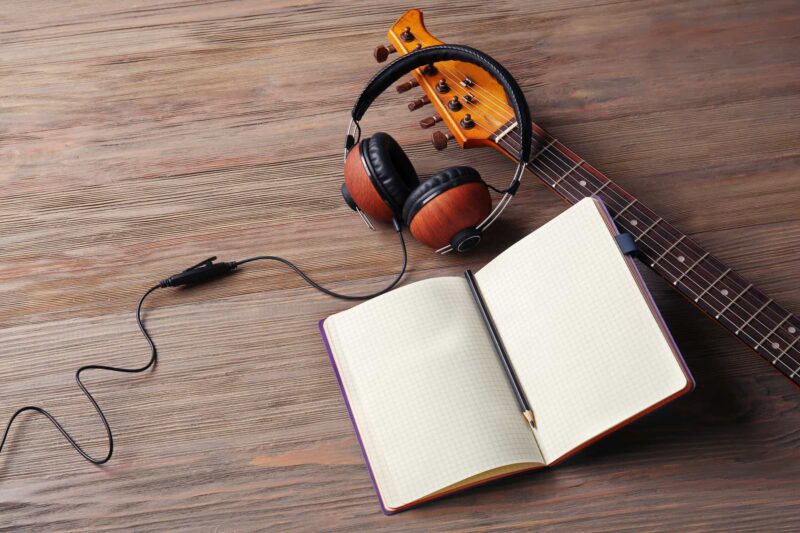 What is Structure or Form?

The form or structure of a piece of music is like its architecture. In other words, we are talking about the order in which its main sections appear, along with their respective repetitions.

The concept of form has been around for centuries, and there are countless levels of organization that represent the structure, as well as a host of familiar and standard forms from classical music to rock and pop.

To cite two examples, in classical music we have the Sonata (which is subdivided into exposition, development, and recapitulation), a form used by great composers such as Beethoven (Piano Sonata no. 28) and Liszt (Sonata in B minor).

In popular music, we have the blues (which is subdivided into three parts of four bars each), used by great musicians like B.B. King in The Thrill Is Gone and Thelonius Monk’s Straight, No Chaser.

Although both examples represent different styles and genres, they also reflect the organizing principle that seeks to balance repetition with contrast and tension with relaxation.

In songwriting, this idea is precisely the concept that every composer tries to achieve as effectively as possible.

There are certain song structures that have been used time and time again in some of the best-known hits of the past 40 years.

Successful songs are generally structured in a specific way or are a variation of a familiar structure. First, we need to look at the song sections that make up structure or form. 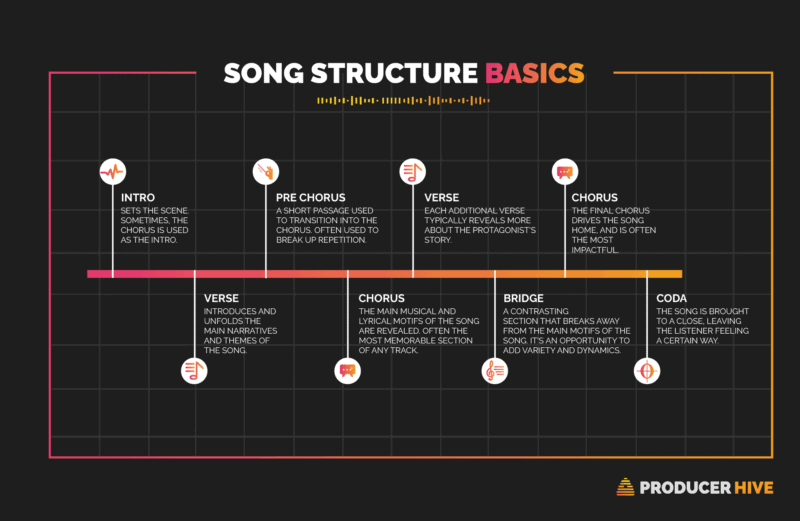 Even though this form is no longer as popular as it used to be, it is still an effective way to compose a song, as it allows the composer to develop the idea with three verses.

The most emotional point or climax almost always occurs on the bridge which will consist of a different melody and harmony, with the intention of breaking the monotony and keeping the listener interested.

A simple example of this form is the song Yesterday by The Beatles, composed and performed by Paul McCartney (although credited to Lennon/McCartney).

It is worth mentioning that this is the most recorded song in the history of popular music.

Another extremely popular song that uses this form, but in a more complex way, is “Every Breath You Take” performed by The Police and composed by Sting. This song was the most played song of the eighties.

This is without a doubt the most popular form used today. It gives the composer a good balance due to the alternation of the verse with the chorus and the inclusion of the bridge to have even more contrast.

As commonly used tools in this form, we have the addition of the pre-chorus before the first and second chorus and the upward modulation of the last chorus, typically of a tone. It is also common for the last chorus to be repeated to emphasize the song title (which usually appears in the chorus).

This form allows the overall message of the song to be heard three or more times, which makes it ideal for the listener to remember due to the clever use of repetition.

Of course, everything will depend on the skill of the composer, but this form is a great starting point.

The smash-hit Love Song by Sara Bareilles uses this form.

Besides creating a balance between tension and relaxation and repetition and contrast, the form must be used in such a way that the composer can express himself as effectively as possible and without obstacles in the organization of the parts.

This is why as songwriters, we must know these common song structures and be able to analyze which ones will help us to express ourselves effectively.

Although the form ABABCB is the most used in songs today we must be aware that this structure might not always be the best for expressing our idea effectively. It is also essential to keep in mind that the main forms used in popular music songs are usually altered but always keep the basic principle of their original structure.

This form has the advantage of developing an idea in great detail due to the presence of three verses. It is somewhat similar to the ABABCB form, which replaces the third line with the bridge. This is done generally to introduce an element of contrast, both in music and lyrics.

One of the disadvantages of this form is that it can become monotonous since it only has two sections that are repeated three times.

How To Write A Verse (Keep Listeners Hooked With These Tips)

However, this should not be a problem if you have good lyrics and a melody that propels the theme and leaves the listener asking for more.

A big hit using the ABABAB form is Message In A Bottle composed by Sting and performed by The Police. This song is a great example of a fully developed story.

Some experts consider that this form is simply a variation of the previous one, others disagree.

It is important to keep it in mind because it has a very particular effect: you start directly with the central message of the song, that is, the chorus.

There is no preparation to get to that chorus, and this can be a double-edged sword. It turns out to be very effective with certain types of arrangements. One of the most common tricks used here is to have the first chorus played with only voice and an instrument such as acoustic guitar and then the bass and drums enter for the second chorus.

This is a very particular way but it offers the option of presenting a situation (which is the central theme of the song) and then adding to it. It can be made more effective through modulations – as mentioned, it is common to raise the last chorus and verse a full tone.

One song that uses a variation of this form (by including a bridge) is Avril Lavigne’s hit Girlfriend. If we go back in time, we also find this form in the classic Can’t Buy Me Love by The Beatles.

So, we’ve explored the main forms used in popular songwriting and analyzed how they can be altered. Like most things, with practice and experience, you will develop a feel for which song structure to use and how it can be varied to suit your needs.

Others sections such as an intro or outro can also be added to the form. At the end of the day, you need to trust what you hear and make it as interesting for the listener as possible. Take the time to listen to songs and analyze their structure, harmony, melodies, and any other attributes that catch your attention.

Then write many songs, and repeat this process constantly. This is exactly how many of the greatest songwriters in history did it, so why not you?

For a more in-depth analysis of song structure, you can check out some of our other articles: