Chris Lee
Songwriting Tips
Disclosure: We may receive commissions when you click our links and make purchases. Read our full affiliate disclosure here.

The structure of a song, or a song form, is one of the most crucial elements of songwriting. It’s often the main ingredient of a great song, and it can help put musical ideas into an order that brings out the best in a song.

The common types of sections you’ll see in popular music are verse, chorus, and a bridge. In many cases, verses have a purpose of storytelling, often with a different set of lyrics each time it repeats. A chorus or refrain, on the other hand, is a repeating section that contains a hook and the central theme of the lyrics.

So, what is a bridge in a song? What is its purpose? You might not always have a bridge, but they are highly effective when used correctly.

This article is all about creating killer bridge sections!

What Is A Bridge (In Music)?

A bridge is a contrasting section that stands out from the rest of the song with the purpose of linking two other sections. They are often used to connect the verse and chorus of a song. In many cases, bridges will have a new set of chords and a different melody. In some cases, the bridge might even go into a new key, or have a different drum groove.

Why Do We Use Bridges In Songs?

When songs simply use a verse/chorus/verse structure, listeners get bored easily. A bridge can be used as a way to add excitement and variety to the song. Adding a brand new set of ideas to the listener’s ears can keep them engaged with the song.

A bridge can also build up tension. When it comes right after the chorus, it can serve as a climax. Usually, when this happens, the part following the bridge will be much softer, creating dynamic contrast.

But most often, a bridge acts as a connector between two parts of the song. These parts don’t have to be different. A bridge can come between two choruses, or between two verses. This is a great way to subvert the listener’s expectations and keep them engaged. 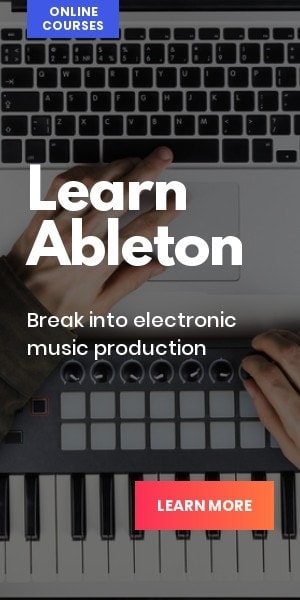 Noiselab: Arranging, Mixing & Mastering
Use Code HIVE25 For 25% Off

This course will focus on taking a collection of loops and ideas and arranging them. Concepts include: editing, track automation, common techniques for song arrangements, and much, much more.

Great Examples Of Bridges In Music

Something by The Beatles

This is a perfect example of an amazing bridge section written by the great George Harrison. It starts at around 1:12 and ends at 1:40. There are many things done here to make the bridge really effective.

Before the bridge, the mood of the song is mellow, romantic, and legato. It’s almost like George is serenading in a soft-spoken manner, and each phrase is memorable. But when the bridge comes in around 1:12, there’s a gradual shift in mood starting with the key change, and a huge buildup occurs.

Almost everything about the bridge is different from all the previous parts of the song. George Harrison introduces a new key (VI major of the previous key), a different chord progression (descending stepwise bass motion), and a totally new drum feel.

It’s clear that this is the climax of the piece. George is belting longer notes, the instrumentation is more accented, and the strings play majestically. It’s a totally unique drum groove on its own, where Ringo is banging with a marching feel on the toms instead of playing the usual bass drum and snare. He’s also playing the hell out of the hi-hats!

Compared to the verse and chorus parts, the bridge adds a whole extra layer of excitement and contrast, and it clearly builds up tension. It’s a perfect connector from the previous chorus to the interlude. The key change works like a hot knife through butter, and we are right back to mellow and romantic vibes right when the bridge is over.

This truly is one of the best examples of a bridge out there, in a song widely recognized as one of the greatest Beatles compositions ever written.

‘Any Major Dude Will Tell You’ by Steely Dan

This is another one written by the ridiculously good songwriters Donald Fagen and Walter Becker of Steely Dan. Steely Dan are known for their sophisticated jazz harmonies that manage to be accessible and catchy despite their complexity.

The general feel of the song up until the bridge is smooth and chill, and there’s a distinct ’70’s California’ vibe throughout.

You’ll notice this one has a much shorter bridge compared to Something. But it’s still the climax of the song, and the ascending chord progressions help elevate the dynamics. Even though it’s short, this particular bridge works as a great connector between the two interludes, effortlessly leading into another verse.

Here is an example from a more recent song…

“Hotline Bling” was a huge hit and its video spawned countless memes. Like many rap songs, the whole song is a continuation of the same beat with slight changes, and the new melodies, hooks and lyrics make up the different sections.

The bridge comes in at around 2:35. This is the only time where the chord progression changes, and there is a clear shift in mood as a result. In this case, the bridge is quieter and more mellow than the rest of the song. Thanks to the relative monotony of the instrumental, the bridge stands out with little effort and effortlessly leads back into the main hook.

(If you’re into making your own beats, check out our guide to the best hip-hop music production courses on the net.)

Is A Middle Eight The Same As A Bridge?

Musical terms are often confusing, and different parts of the world call things by different names. That’s precisely what happened with ‘middle eight’ and bridge, though they are essentially the same thing.

The common understanding is that ‘middle eight’ is a term more frequently used in the UK for popular music, but is not as common elsewhere. For instance, The Beatles often refer to their bridges as middle eights, but American artists rarely do this.

At the end of the day, ‘middle eight’ and bridge both refer to a section that is comparatively different and contrasting that is used to link sections in a song.

Do You Need A Bridge?

No, not always. While bridge sections are very effective, but there are plenty of amazing songs that don’t have them. For example, many famous Bob Dylan songs follow a simple verse / chorus / verse structure with no bridges. So it’s totally up to you as the songwriter!

The answer can also vary for different genres. If you’re writing a pop song that you want to be a huge hit, it’s standard practice to include a bridge. If you’re a singer-songwriter and you feel your song already has enough material, then it’s totally fine to not have a bridge.

Noiselab: Arranging, Mixing & Mastering
Use Code HIVE25 For 25% Off

This course will focus on taking a collection of loops and ideas and arranging them. Concepts include: editing, track automation, common techniques for song arrangements, and much, much more.

1. Switch From Major To Minor (Or Vice Versa)

As I keep saying, bridges are all about contrast. A simple but effective way to get harmonic contrast is to switch to the relative minor key.

A classic example is Ray Charles’ Georgia On My Mind. The song is mostly in a major key in the A section, and in the famous bridge section, the chord progression goes to the VI minor key. In the recording, the song is in G major, and Ray Charles goes to E minor in the bridge, using minor 2-5 progressions as the transition.

Going to the key of VI minor is the most reliable way to change to a minor key. You can also change to a I minor, III minor, or use IV minor (the parallel minor).

In a song that’s already in a minor key, it’s common to see bridge chord progressions going to major chords or keys – like changing to the bIII major or bVI major keys.

2. Switch Up The Drums

As is the case with Something, changing the drum pattern is another effective way of writing a bridge. Another famous example would be Ain’t No Sunshine by Bill Withers. This is a very simple yet powerful technique, and in this particular song, the bridge consists primarily of a drum breakdown. Bill Withers just sings “I know, I know, I know…” while the drum groove gets more and more funky. By stripping out all the other instruments, it’s a particularly powerful bridge that creates dynamic contrast simply by removing elements.

Changing the intensity is another great way of writing a bridge section. Here, intensity refers to the overall combination of dynamics, tempo, and textural density.

A good example is Adele’s Rolling In The Deep, where the bridge is completely its own entity compared to the rest of the track. Accompanying Adele’s vocals are simple kick drums, clapping, and a cappella choir singing. In the other songs we’ve looked at, the bridge was often the climax of the song with the loudest dynamics. But in this case, the bridge is much softer than the chorus. This makes it a ‘refresher’ that seamlessly leads back into the main hook, which is made more powerful as a result.

Some songs have bridges that completely change to another key. In Something, the bridge goes into VI major key from the I major key. This technique is more advanced than the others, so you should really master using the V dominant or II-V progression before writing bridges in other keys. If you can effectively use V dominant chords, then you should be able to change keys and come back into the original key with no problems.

Consider what the common bridge chord progressions are, and try writing your own set of chord progressions and lyrics based on your observations. If you absorb and learn from the bridges written by the great songwriters, you should be able to write your own bridge sections in no time.

Bridges are perhaps the most overlooked components when it comes to song structure. Much fuss is made over anthemic choruses loaded with hooks, and verses that provide narrative structure. But a good bridge can really bring these elements to life and save them from being repetitive and dull.

If you’re new to songwriting, it’s best to pick some of your favorite bridges and analyze what makes them so effective. Writing powerful bridges is a dark art, but with enough practice you’ll develop the right instincts to make them work every time.