Subtractive vs Additive EQ (When To Use Each & Why) 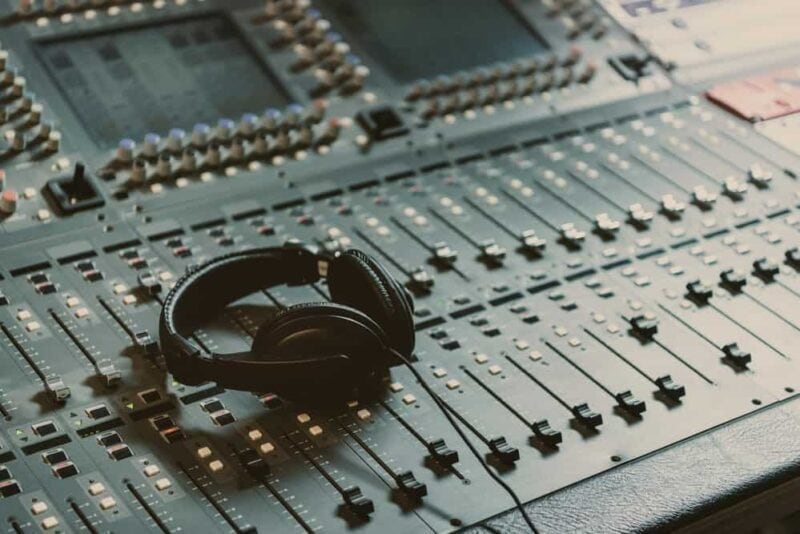 EQ is perhaps the most important tool for mixing your music. So it’s important to EQ the right way!

But which one is better? You may find you have a preference for one type, but really they are both equally useful and you should be familiar with both additive and subtractive EQ.

In this article, we’ll go over the differences, myths and misconceptions, and best-case applications for both of them. Let’s dive in!

As the name suggests, ‘subtractive’ EQ is the act of removing unwanted frequencies from an audio source. Techniques like cutting, notching, and filtering frequencies are all considered to be in the wheelhouse of subtractive EQ.

Conversely, ‘additive’ EQ is the process of boosting frequencies of the audio source, accentuating frequency bands that you want to be more prominent in the mix

Now, of course, nothing is stopping you from using cuts and boosts inside the same EQ plugin. If you feel confident about your EQ choices, that’s fine. But it’s still helpful to dissect additive and subtractive EQ individually if you want to really learn why the EQ choices we make matter more than we think.

It’s also becoming increasingly common to separate additive and subtractive approaches into different EQ instances. At the very least, it’s just neater this way, and it will help you gain a better understanding of the mixing process.

Subtractive EQ Will Give You More Headroom

If you remove frequencies from a sound, how could it possibly be louder? Because of a thing called headroom. We all know that there’s a limit or ceiling to how loud our songs can be, and you’re probably familiar with clipping already.

When we use subtractive EQ, we are able to add more gain to the signal before we reach that limit. Subtractive EQ does not sound as immediately impressive as additive EQ because it results in a quieter sound, and we tend to favor louder sounds when making comparisons. But if we boost the subtractive EQ enough to compensate for any gain reduction done in the cuts, it’s easier to hear how subtractive EQ has improved the sound.

Subtractive EQ is Better For Mixing

When mixing a song, the goal is essentially to make each element fit in with the others.

For the sake of a metaphor, imagine packing a suitcase on a well-deserved trip to Thailand (what pandemic?).  You don’t just jam all your clothes in there like you’re stuffing pizza boxes in the trash. Instead, you want to fold the clothes nicely so they all occupy their own space.

Folding the clothes is like subtractive EQ—it pares down your Hawaiian t-shirts so they can fit in with your extensive Speedo collection.

While you can get the same results with additive EQ, it’s generally better to do subtractive EQ. Why? Once again, because of headroom.

When using additive EQ, it becomes too easy to get into what’s known as the gain wars. The gain wars go something like this:

And on and on it goes…

Soon each track has so much gain that it’s clipping and causing distortion (and not the good kind). Then, when you combine them together, they also clip the master fader, leaving no room for the mastering engineer to work with.

The result? A bad sounding track. The solution? Subtractive EQ.

So it’s easy to see how subtractive EQ is a neater and more sensible approach that will save you (and whoever mixes your track) a lot of time and effort down the line.

Additive EQ Is Better For Creativity

Additive EQ is useful for creative applications when you want to make a sound more interesting or appealing. Additive EQ is great for accentuating the frequency components that really make a sound present and distinctive. Sounds will only have a few of these sweet spots at most so don’t get bogged down here – just remember the “gain wars” trap from before.

But wait. Couldn’t we do the same thing with subtractive EQ?

Yes, we could. We can cut the frequencies on either side of 2 kHz with high and low shelf EQs and then boost the entire signal. It would sound exactly the same.

What’s the difference then? One word: workflow.

Comparing the two methods above, additive EQ takes 1 step, while subtractive EQ takes 3 steps. It doesn’t seem like a big deal right now since each step only takes a few seconds, but when you have to do this to 100 tracks, the time saved really adds up.

In addition, creativity is impulsive—good ideas come out of nowhere suddenly and they exit just a quickly. You don’t have time to be fussing around with precise cuts when you’re creating a song – save that for the mixing stage. Additive EQ is simple and “musical” whereas subtractive EQ is more time-consuming and precise.

So as we’ve seen, while both can be used to achieve the same effects, subtractive EQ often makes it easier to make elements fit together in a mix and additive EQ is better for general enhancements and creativity.

What’s important is that you know the sound you want and the most efficient way to reach it. Here’s my advice…

Go into subtractive EQ with a surgeon’s mindset. You’re in a mode of identifying and fixing issues and sculpting problem areas.

Use additive EQ with a creative mindset. What can you enhance? What is lacking in a sound and what can you add to it to make it sound how you like?

At the end of the day, they are both equally useful. You may have a preference for one over the other, but really they are used for different things so it’s impossible to say that one is objectively better than the other. Ideally, you use both equally when appropriate.

This additional voltage from the active components colors the sound, therefore making the signal less faithful to the original.

However, many subtractive EQs would also include an amplifier to compensate for the lost gain, which meant they actually did include active circuitry. Once again this colored the sound but with a different tone. In these cases, the real claim should be that active EQs just don’t color the sound as well as passive EQs—but it’s really down to personal taste.

“The 550A, in particular, is so simple that I feel like I can easily get a tone I was imagining out of them. It almost feels weaponized. Sometimes in audio things feel light and delicate, this feels like a lethal weapon; it’s like a sword.”

Of course, this becomes a moot point if you’re mixing in the box. But this discussion leads us into the next myth…

Sound is made of cyclical waves of air pressure, and waves have amplitude and wavelength. The third quality we can look at is the phase of the wave, which is the relative position of a point within a wave cycle. The two pictures depict the same 440 Hz sine wave but the second has a phase shift. 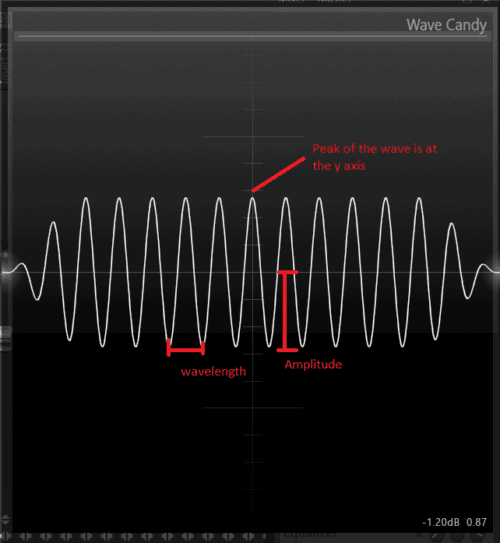 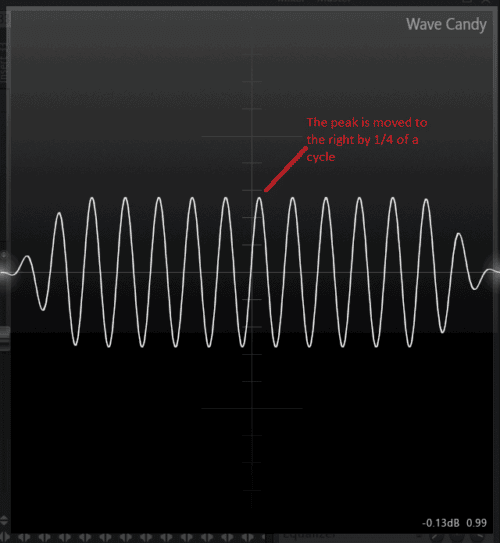 These two waves can be “added” together: if the two sound waves meet and they both have peak pressure at that point, the amplitude will be doubled. Conversely, they can also be “subtracted” from each other: if, at this point, one of the waves has low pressure while the other has high pressure, the two will cancel each other out.

The phase shift in the example above will cause both an addition at some points and subtraction at others, depending on how and where the peaks align.

Traditional EQ designs actually rely on phase shifts to cut and boost frequencies. Additive and subtractive EQ will both have the same phase shifts, but a linear phase EQ will not. We can confirm this through a quick test.

1. Open your DAW and run the same audio through two tracks. 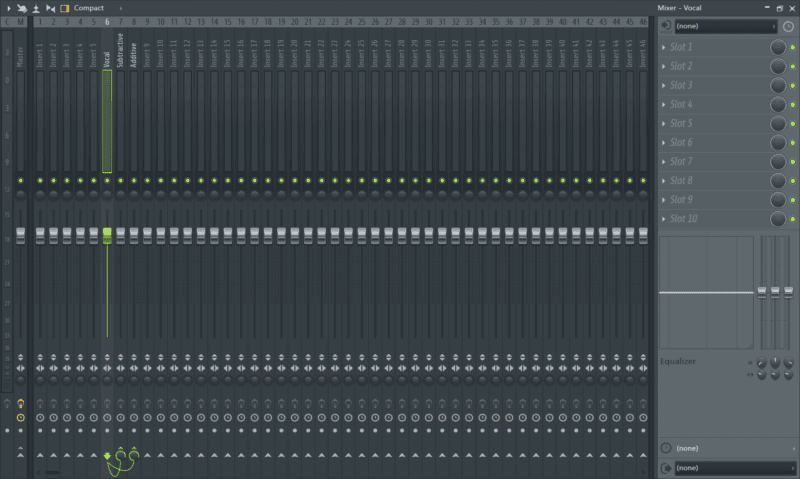 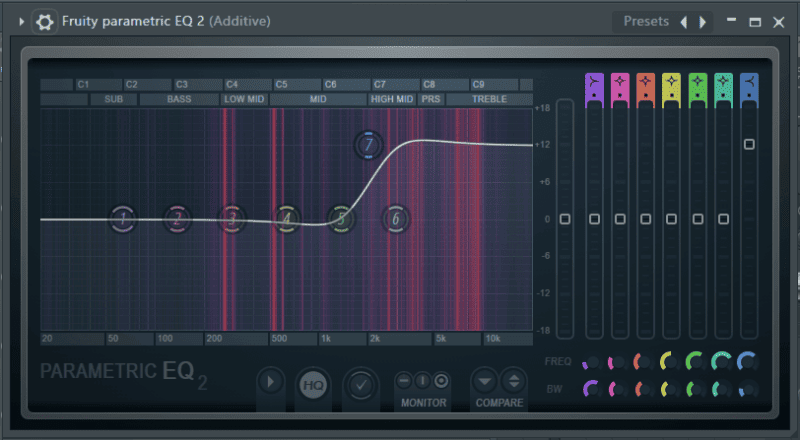 3. Add a low shelf EQ at 2k with a -12db cut on the second track (it should sound the same as track one but quieter) 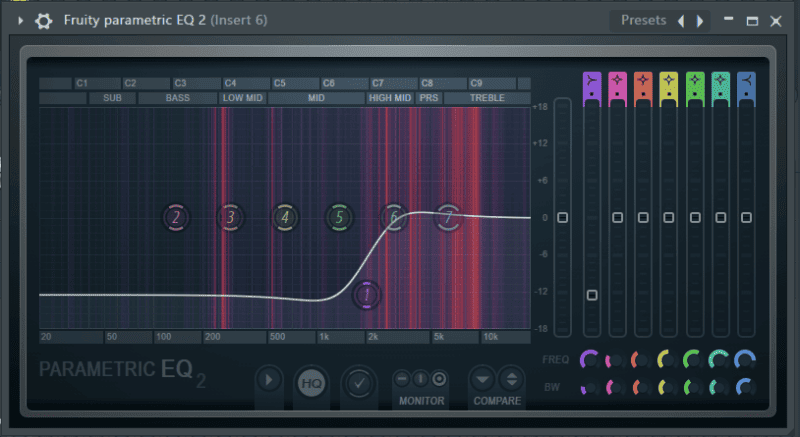 4. Boost the second track so the levels are the same for both tracks. The audio will now be twice as loud. 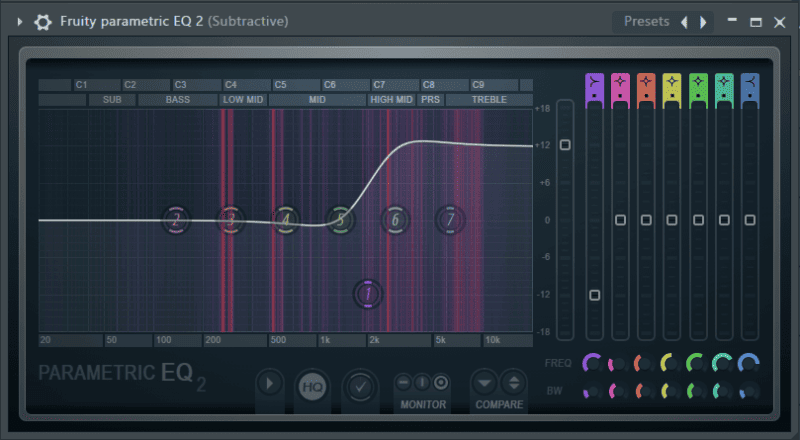 5. Now phase invert the second track. You are left with silence as the signals cancel each other out. 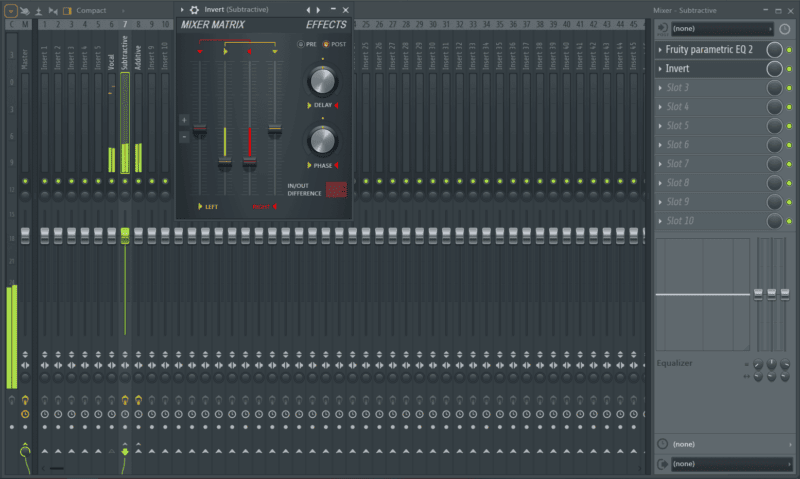 Q: What are the different types of EQ?

A: In this article, we have discussed whether to boost or cut with EQ. But we have not talked about the specific categories of EQs aside from briefly mentioning linear phase EQ.

We could go into the details here, but we’d be repeating ourselves – just check out 5 Different Types of EQs (And When To Use Each).

Q: I’ve heard that you should “cut narrow, boost wide”. Is this true?

A: The reference to wide/narrow refers to the bandwidth of the filter, or the range of neighboring frequencies that the filter will affect. Bandwidth is usually labeled as “Q” on EQs. The higher the “Q” (or quality) the narrower the bandwidth.

“Boost wide, cut narrow” is a common saying, and it is generally true but let’s take a moment to dissect why that is.

When cutting something out of the mix, narrower cuts sound less noticeable, often because the cuts get rid of sharp resonances. In comparison, a wide cut changes the track’s entire tonal balance.

You can test this yourself with boosts and cuts of narrow and wide Qs on the same track. 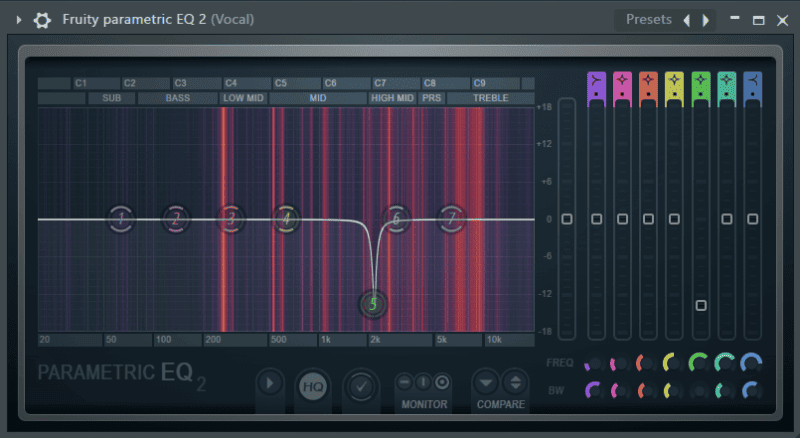 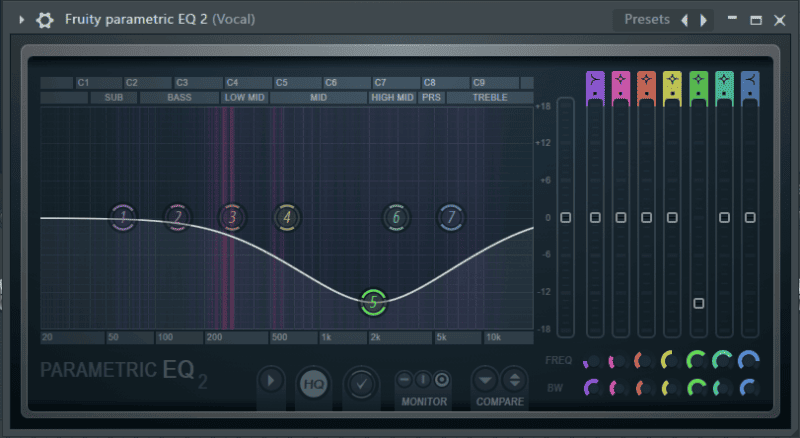 You would think that the same must be true of boosts, but that’s not the case.

When you boost narrow, resonances are artificially created, and they are usually harsh and undesirable. These annoying ringing tones are often what we are trying to remove with EQ in the first place! In contrast, the wide boost sounds relatively more transparent, despite changing the tonal balance of the track. 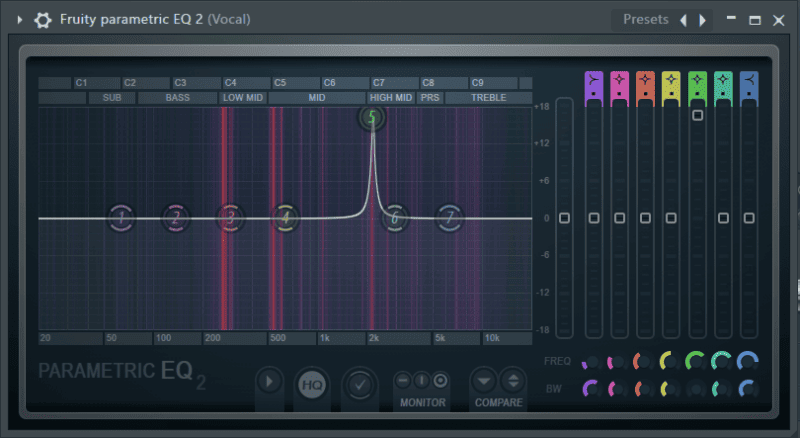 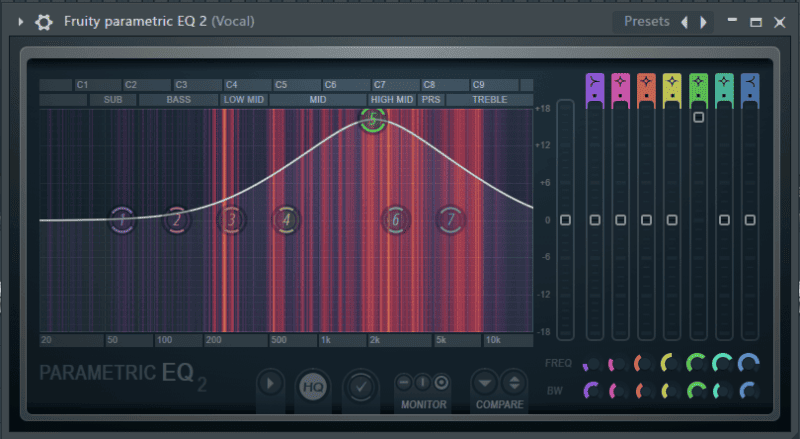 Of course, this maxim generally applies to removing specific problem frequencies (resonances) and boosting for tonal balance. There are instances in which you would cut for tonal balance as well. And there may be times when you would want to create extra resonances – particularly if you’re into more ambient and experimental styles.

But on the whole, the “cut narrow, boost wide” rule is truthful and valid for creating a balanced mix.

Q: What is the best EQ out there?

A: It depends on your taste and what sounds good to you. Everyone has their own favorite EQs. If you’re on a budget, here’s a guide to free EQs so you can figure out your favorites for yourself!

So we’ve looked at a lot of pros and cons for each EQ approach, but it’s important to remember that one approach is not better than the other. It’s like trying to say one method of synthesis is better than another. Ideally, you should be utilizing each approach when needed, even if you have a preference for one.

In case you missed it, we put together a guide to the 6 best free EQ VST plugins that you can download and use today to practice what you’ve learned. You’ll find that certain plugins are better suited for additive EQ, and others have features that make them better as subtractive EQ plugins. I’m sure you’ll be EQing like a pro in no time!

Want to dig deeper into types of EQ? Check out What Is A Baxandall EQ (And Why Use It?).