7 Different Types of EQs (And When To Use Each)

Understanding The Different Types Of Equalizers

EQ’ing – probably the most common process in audio production whether it be a recording session, mixing session, live sound or mastering.

Simply put an EQ (or ‘Equalizer’) is designed to add or remove certain frequencies in the sound spectrum. EQ’s can be used to tame trouble frequencies, such as removing the low end of certain instruments to clear up muddiness or used as a way of boosting other frequencies (for example, a slight boost in top-end to add clarity).

It can take years of practice to identify frequencies on the spectrum and learn how to use EQ to shape a sound and make your mixes glue together.

If you’re new to mixing and mastering then check out some of our favourite free EQ plugins to get you started.

What Are The Different Types Of EQ (And When To Use Them)?

The different types of EQs in audio are as follows:

Now, let’s dive into the differences between them and their applications in music production.

P.S.Head to this article for a breakdown of filter types.

A graphic EQ works by separating individual frequencies into banks of sliders which you can add or remove as needed.

The more frequencies contained on a graphic EQ the more accurate the controls are. It’s not uncommon to see graphic EQ’s on older HiFi systems.

Usually, a graphic EQ will contain between 7 and 31 faders, with each one representing certain frequency ranges.

These types of EQ are great for removing problem frequencies that you may find in a mix, so it’s no surprise that they are often used in live sound engineering when ‘ringing out’ a room.

As you can imagine, for a live sound engineer on tour each night will present a different sounding room, depending on the acoustic properties and even the building materials in the structure. This means that in order to get a good sound the engineer will need to calibrate the sound system with the room they are in, which means removing unwanted frequencies or resonances that they may be hearing.

Similarly, this process can be used with a graphic EQ to identify and remove any unwanted frequencies that may be causing feedback.

It is more common nowadays to see graphic EQ’s in live sound than it is in studio work however there are some great graphic EQ plugins if you are looking to experiment with them in your workflow.

Graphic EQ’s are easy to use and intuitive, great for live sound and tuning a room, however they aren’t as accurate as a Parametric EQ. 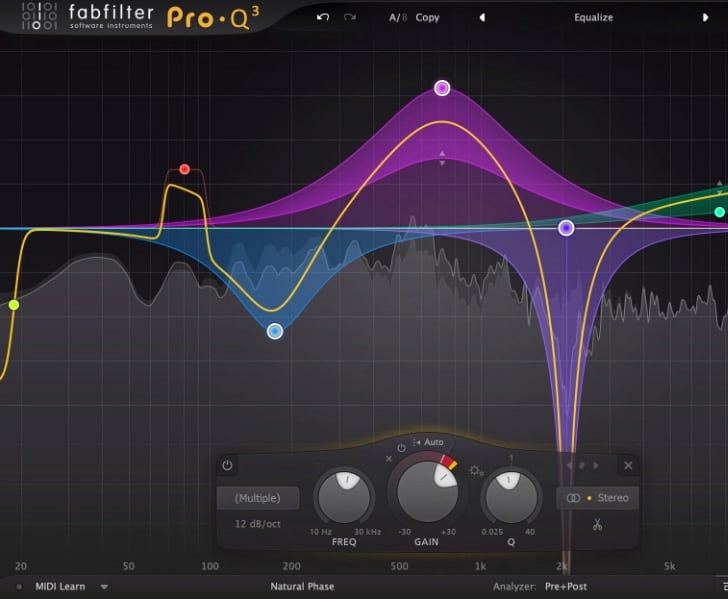 A Parametric EQ is the most common type of EQ you will come across when mixing in the box.

Your DAW will usually come with an EQ plugin as standard and may also utilize an analyzer which displays the frequencies present in the track. This can be found in the plugin in the photo above, which is of the most popular parametric EQ of all time — the Fabfilter Pro Q3.

A Parametric EQ will allow you to adjust and move frequency bands, meaning you can boost or remove frequency ranges as you see fit.

The parameters you will usually find are:

The frequency function on a Parametric EQ allows you to select which frequency you are affecting in the spectrum.

A Parametric EQ works by increasing or decreasing gain to add or remove frequencies. Usually, in plugin form you will be able to do this simply by clicking on the spectrum and controlling the gain with your mouse, however, there are occasions (such as automating an EQ change) where you may key a gain value instead.

Most parametric EQ’s will allow you to apply a High Pass Filter (HPF).

A High Pass Filter utilizes a steep curve which removes a portion of the low end (and lets the higher frequencies ‘pass-through’).

High Pass Filters are great for removing unwanted low-end frequency content and are often used to clear space for the bass and kick drum in a mix. Using a HPF aggressively will remove more and more of the low end, eventually resulting in the ‘telephone’ effect you often hear in pop music.

A Low Pass Filter (LPF) will do the exact opposite of a High Pass Filter, using a steep curve at the high end to remove the higher frequency content.

A Low Pass Filter is useful if you are wanting to clear some space for higher frequency instruments such as cymbals.

Parametric EQ’s are arguably the most common type of EQ when it comes to mixing, and you’ll usually find your DAW comes with one or more plugin as standard.

We’d suggest getting to grips with these before purchasing 3rd party plugins.

However, you will find that each plugin will have their own characteristics so if you’re ready to expand your collection of EQ’s we’d recommend the Izotope Neutron 3 which comes as a package and is favored by many producers.

A shelving EQ is actually quite similar to a HPF/LPF. The term ‘shelf’ comes from the way in which the EQ parameters look.

Whereas a HPF/LPF will have a steep curve, with a sudden drop off in frequencies, a shelving EQ will have a wide Q and a smooth curve which slopes to form a shelf-like shape.

Some Shelving EQ’s will have the option to increase or decrease the mid-range (which is known as a ‘Bell EQ’).

Shelving EQ’s are generally known for being more subtle than an HPF or LPF, removing frequencies in a much more ‘musical’ manner.

Shelving EQ’s are great for achieving a smooth result, without the aggression and sudden drop off that a high pass or low pass filter generally has.

As they have a wide Q they aren’t great for surgically removing small frequency ranges, but are great for boosting or removing the top and bottom end in a subtle-but-pleasing way.

The standard EQ in your DAW will normally offer a shelving function. 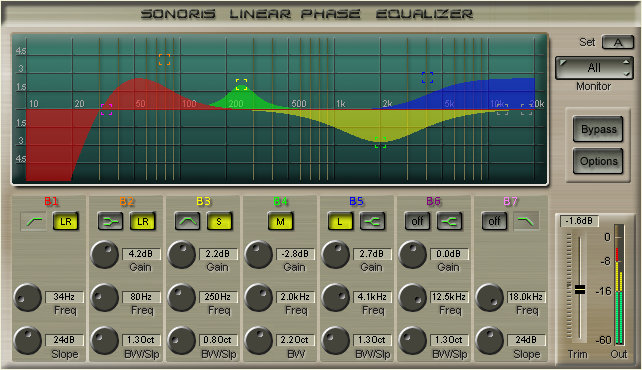 When adding or removing frequencies in your Parametric EQ plugins a ‘smearing’ effect is created, where any frequency you are altering comes slightly out of phase with the rest of the frequencies in the signal.

By using a linear phase EQ plugin, the affected frequencies are simply nudged back in phase removing this smearing effect.

Now, in theory, a Linear Phase EQ SHOULD be universally superior to a regular Parametric EQ.

However, their effectiveness is often debated, with some claiming that the sound is actually a little too ‘clean’, whereas some simply prefer the characteristics and tonal qualities of their regular Parametric EQ.

Linear Phase EQ can be really useful when tracking an instrument with multiple microphones, such as drums, where correct phasing is crucial (microphones that are ‘out of phase’ can create a lack of low end and sometimes when played in mono can cancel each other out altogether resulting in silence).

For 3rd party plugins we’d recommend checking out the free range on KRV Audio before committing to purchasing one. Think of a Dynamic EQ loosely as a cross between a Compressor and a Parametric EQ.

When you make a cut or boost with a Parametric EQ then that change is continuously applied to the signal and will stay that way unless you physically amend it yourself.

With a Dynamic EQ you can set a threshold (much like a compressor) so that the EQ correction only applies when the signal passes that point.

So for example, you may want to tone down a Hi Hat that may be too loud, or increase a Kick Drum that is lacking punch.

A Dynamic EQ is also great for removing sibilance that can be caused by heavy compression on a vocal track and can be used in place of a de-esser.

The difference between this method and a compressor (or multi-band compressor) is the fact that a Dynamic EQ can add gain as well as take away meaning you can cut AND boost, as opposed to a compressor where you will only be able to reduce the dynamic range.

You’ll also find a Dynamic EQ has extra controls, like a compressor, such as Threshold, Attack and Release.

A Dynamic EQ is a really useful tool for adding an extra dimension to your mixes, rather than just the cut and boost approach, especially if you aren’t wanting to affect the entirety of the track you are editing, and instead just want your DAW to make corrections for you in certain areas.

It’s worth noting that for ‘general’ EQ’ing, this isn’t the most effective plugin — however once you learn how to apply Dynamic EQ to your mixes, you’ll start to think of EQ’ing more creatively.

Mid Side EQ is a really crucial tool in audio production and is often utilised during the mastering process.

When talking about mixing you’ll hear a lot of emphasis put on the stereo field. This refers to the positioning of your instruments within your mix. For example, it’s not uncommon for guitars to be panned hard left and right whilst a kick and snare will typically reside in the middle of the stereo field.

Aside from the location of your instruments in the stereo field it’s also important to think about the frequency content.

Using Mid Side EQ allows you to shape the tonal qualities of what you are hearing, either (you guessed it) in the middle or at the side of the stereo image.

Using an EQ plug in with Mid Side EQ functions is common during mastering. For example, instruments such as bass with low frequency content typically sound best in the middle of the mix. Of course some of these low frequencies will end up bleeding into the left and right of the stereo image and using a Mid Side EQ can remove some of the lower elements in those locations without affecting the bass where we really want it to be – in the middle.

The same can be said for higher frequencies. For example you may have a reverb affect panned left and right that is causing some unwanted harsh high frequencies, use mid side EQ to remove them! Of course the same technique can be used to process what lies in the centre of the mix.

Think of a Semi Parametric EQ as a Parametric but with some features missing.

Typically the function missing from a Semi Parametric EQ is the ”Q”. Other than that the features largely remain the same.

A Semi Parametric EQ isn’t a typical mixing tool you’ll come across, as we’ve mentioned EQ is often utilised to make small or surgical frequency changes to fit a selection of tracks together. As there is no Q option on a Semi Parametric EQ there is less accuracy in targeting problem frequencies but thats not to say they don’t have their place.

You’ll find Semi Parametric EQ’s can be used more as a creative tool, with a fixed bandwidth you’ll be able to tonally shape your sound with a large frequency range.

The Anatomy Of An EQ The EQ’ing process can make or break a track. Knowing where to EQ aggressively or subtly can create drastic differences in your final mix. You’ll probably be using a Parametric EQ day in day out, so getting to grips with the standard DAW plugins that you have is a great starting point if you’re a beginner but knowing other types such as a graphic EQ and dynamic EQ can be really useful as well.

Training your ears to pick up on when and where you need to EQ takes years of practice but learning what types of EQ are at your disposal (and how to use them) will not only clear up your mix but also streamline your workflow.