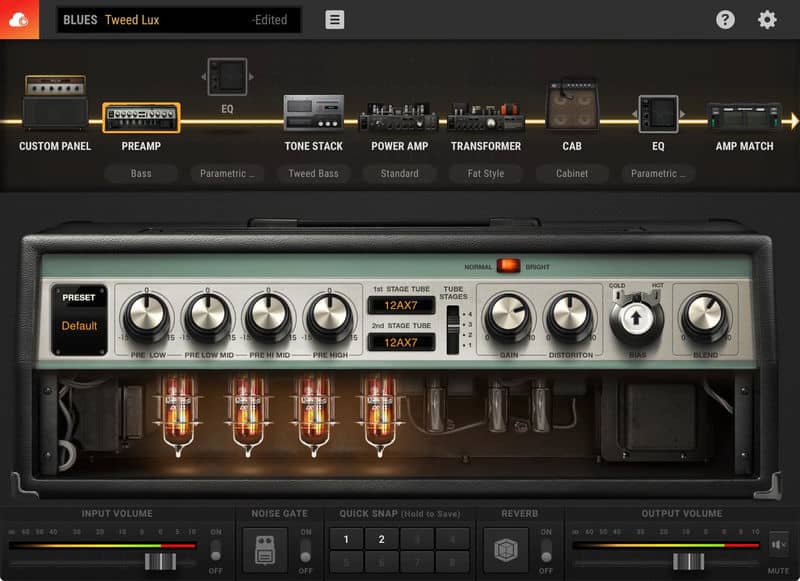 Bias Amp 2
VERDICT
Bias Amp 2 gives guitar players the keys to the kingdom. You'll find everything here, from early Fender tweed amps to the modern high gain tones from Mesa Boogie amps. Bias Amp 2 provides you with so many options yet allows you to easily and intuitively create a tone that fits perfectly.
Features
10
Sound
9
Value
9
PROS
More options that you can dream of
Professional sound quality
Realistic impulse responses
CONS
Newbies will be overwhelmed
9.3
OUR SCORE
CHECK PRICE
Plugin BoutiquePositive Grid

Ever since music became a thing you could make on your laptop, homemade productions have started to appear on popular music charts. However, guitar amplification took a long time to properly transition to the digital realm for a number of reasons, but mainly because the technology just wasn’t quite up to scratch for a long time. However, in the past few years, several software companies have made huge strides in digital guitar amp modeling.

Positive Grid just so happens to be one of those brands. In this article, I will give you my review of the software that launched them into software stardom: Bias Amp 2. So, let’s get into it!

Bias Amp 2 is the ultimate virtual amp designer, authentically recreating the tone and feel of real tube amplifiers, while allowing you to mix and match components to create your ideal amp.

Bias Amp 2 is software that’s available in 3 grades. Standard, Pro, and elite. For the purposes of this review I will be focusing on reviewing the elite version. If you want to know more about the differences between the three software tiers you can check out this very nice overview on Positive Grid’s website.

Bias Amp 2 lets you dive into aspects of amp design most guitarists would consider witchcraft. From the type of preamp valves, to the output transformer. This allows you to tweak the sound you have in your head to perfection. I’m going to subdivide the features of this powerful software, because the list is quite extensive.

Bias Amp 2 features a whopping 36 different amplifier models, which are nicely arranged by their sound characteristics. The list of amps includes iconic amplifier replications of classic amps, like a Fender Twin Reverb, a Vox AC30, multiple Marshalls, and modern amp brands like Mesa Boogie, and Soldano.

Each one of these amp models can be fully tweaked to your satisfaction. But even if you don’t want to tweak your amp to the nth degree, the front panel controls still offer all you really need with knobs for gain, volume, and a three-band EQ along with a presence knob.

For those who have grown tired of only being able to dial in a tone with standard amp controls Positive Grid have got the perfect answer.

After dialing in a ballpark tone with the amp’s front panel you can tweak parameters in the different parts of a typical guitar amp.

This includes the preamp, tone stack, power amp, and the output section. This way you can alter not only the tone, but the general feel of the amp.

Over the years many guitarists have complained about the fact that even though a modeler sounds good they will still play their amps because it just feels nicer. With Bias Amp 2 you can adjust the amp’s internals so that you can create something that really feels authentic, or just make something that is so radically different from your own amp’s sound that you’ll want to stay in the box.

The preamp is the first of many extra layers you can control in Bias Amp 2. The preamp section determines the basic gain structure of your amp. It consists of tubes that exercise a certain amount of compression (or distortion) on the raw output of the guitar. By changing the tube type, you can alter the amount of overdrive your amp will generate.

The preamp section is also the first broad EQ in the signal path after the tone controls on your guitar. You can alter the EQ before going into the tube section of the preamp and after. By doing this you can control how the tubes will react to specific frequencies.

The tone stack covers the behavior of the EQ of the front panel. Everyone knows that the treble knob on a Mesa Boogie will not have the same curve as the treble control of a Fender Tweed. This offers guitar players a great deal of control.

When the amp is running high, the power amp typically serves as what I like to call a fine polish to even out the imperfections of an amp. One of the key differences between the preamp and power amp is their distortion characteristics.

Preamp overdrive tends to be very forward in the mid-range and the top end, whereas the power amp seems to have a broader quality. It’s typically deeper in the low end and sounds warm but defined. Making sure the preamp and power amp sections gel together is the key to getting a good tone.

You can do this by swapping out the various power amp tubes. Of which you have 6, each with different characteristics. If you like the response of a Fender-style power amp you can use the 6L6 tube, or when you want something that has lots of headroom you could use a KT88.

This is the feature I was most excited about when I tried it for the first time. In reality, the sound of the amp is only being impacted in a very subtle way, but the feel changes dramatically. You can go from an extremely tight feeling that begs to be used for metal to a loose feel that’s more suited for classic rock.

But the thing I enjoy most about this is that they made the complex principle of amp compression simple. They did this by giving you the same set of controls that you would find on a studio compressor. This means you don’t have to worry about the gauge of copper wire used in a transformer, or the resistors and capacitors. Just the standard attack, release, ratio, and threshold.

(For a full run-down on how compressors work, check out Understanding Compression (Audio Compression For Dummies))

You can also change the output transformer itself. The transformer mainly influences the broadness of the amp’s frequency response. With the Fat transformer giving you a big low end and extended top end, whereas the British transformer gives you more of a low-mid focused response.

Next to all the traditional amp sections Bias Amp 2 also allows you to insert graphic EQs in between the different parts of the amp. Let’s say you like the overall response of the preamp, but there’s a nasty peak at 3kHz with your guitar. You can just insert a graphic EQ after the preamp section to get rid of the peak. Or even if you just want to have the amp sound a little brighter. You can do that by placing a graphic EQ after the guitar cabinet.

What else could the folks at Positive Grid have done to give you more tweakability? An insane amount of impulse responses. Not only from their own archives but (if you buy the Elite version) also from world-renowned speaker brand Celestion!

The stock impulse responses are pretty good on their own, and can cover a lot of ground without sounding cheap. However, Celestion speakers, and their impulse responses, are renowned for a reason, and you will immediately notice that when you load one up. The top-end expands, and the low end feels organic and has a real three-dimensional quality to it.

Bias Amp 2 is the ultimate virtual amp designer, authentically recreating the tone and feel of real tube amplifiers, while allowing you to mix and match components to create your ideal amp.

But the impulse responses you get are actually more than just impulse responses. Bias Amp 2 offers full control of the mic placement. You can decide how far away the mic is from the speaker, and you can change its position relative to the speaker cone. One of the things I found particularly interesting about this is that every position is different, but not in the way you would think…

For example, one of the most common mic placements for a guitar amp is on the meeting point of the cone and the dust cap on the speaker. However, since a speaker is a circle, you can put a microphone in 360 different position whilst staying in the same place relative to the cone and the dust cap. In simple terms, the left side of the speaker will sound different to the right side, or the bottom side, or the top side.

As if that isn’t enough, Bias Amp 2 allows you to have two microphones on your speaker cabinet at once. In the mic department, you can choose some of the most iconic mics to have been placed in front of an amp.

You have the classic SM57, which is a studio mainstay used in countless recordings. Another mic is the Royer 121 ribbon mic. This mic is a very warm-sounding microphone, which makes it a great companion for the bright and high-mid focused SM57. If you want to read up on how the mic type affects your recording you can check out this article.

Every guitarist has wanted to sound like someone else at some point in their playing career. Bias Amp 2 has made that a little easier by giving you access to the Amp Match section. Simply upload a small audio file of the tone you want, and Bias amp will try to approximate that tone as closely as possible.

At the very least, this can make for some fun experiments and is a quick way to come up with setups you wouldn’t have thought of making.

As a guitarist who’s ridiculously picky when it comes to guitar tone, I can safely say I do not regret purchasing this software. It’s perfect for the guitarists that need to be able to record studio-grade guitar sounds whenever inspiration strikes, but without disturbing the neighbors.

Tech junkies will be in heaven with Bias Amp’s unique customization options that really help it to stand out from other amp sims. It’s hard to imagine anyone feeling disappointed with this product, it’s really got something for everyone and always manages to sound fantastic.

(If you’re looking for the best free amp sims, we’ve got you covered with 15 Best Free Amp Sims With Excellent Tone.)