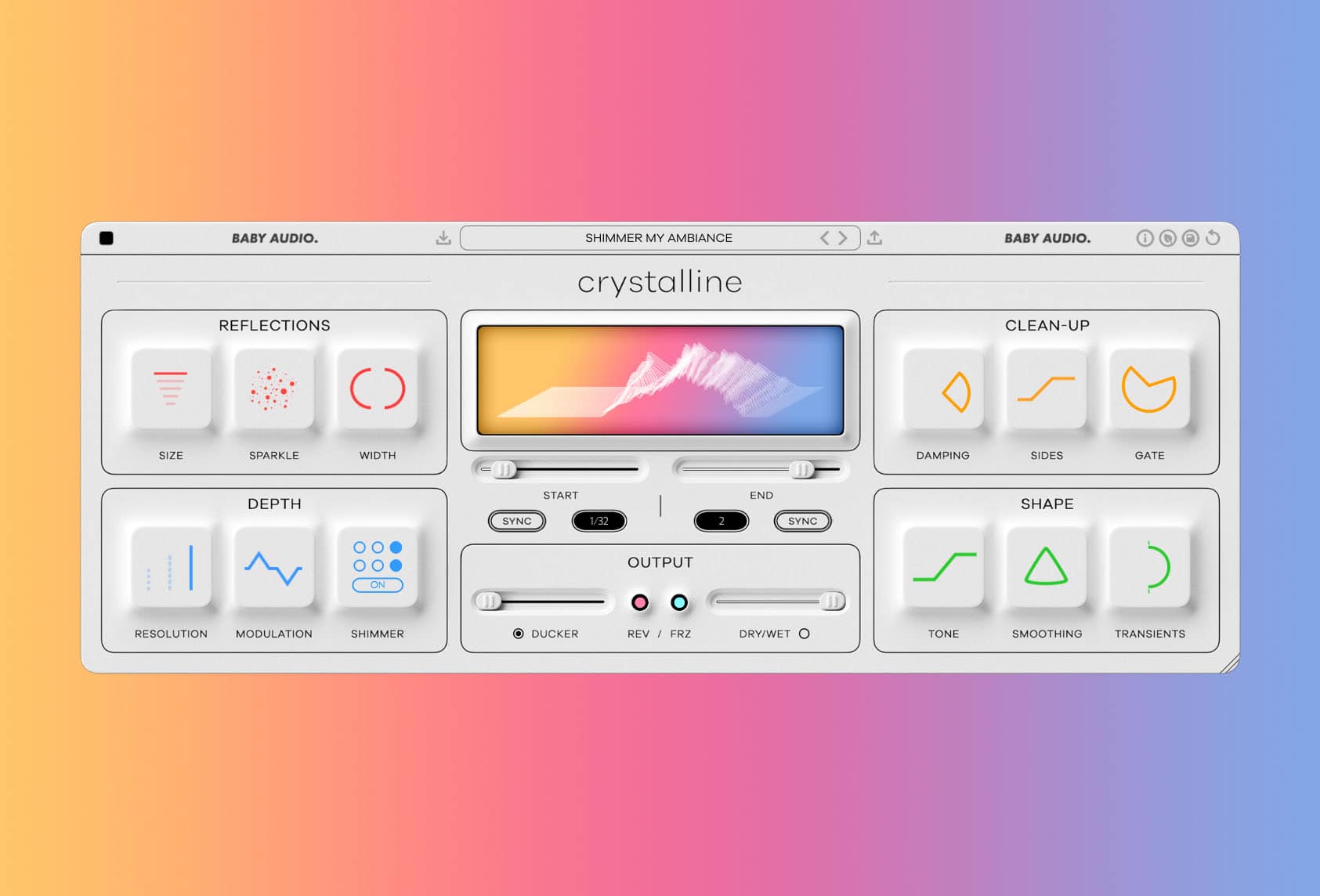 Baby Audio Crystalline
VERDICT
If you want an exaggerated, dreamy, and 'magical' reverb plugin with a lot of clarity, then Crystalline really delivers. The interface is baffling at first (and a bold design choice) but you'll get familiar with it in no time. Crystalline is particularly good on lead lines and vocals because it never clouds out the important elements in your mix.
Features
8
Sound
9
Value For Money
8.5
PROS
Amazing sounding reverb
BPM-synced pre-delay and decay time
REV and FRZ controls are fun
CONS
Potentially confusing interface
Not ideal for 'realistic' reverberation
8.5
OUR SCORE
READ REVIEWS
Buy On PluginBoutiqueBuy On Baby Audio

Crystalline by Baby Audio is billed as a “next-generation algorithmic reverb” that is heavily inspired by early reverb units made by EMT, Lexicon, and others.

I would say ‘next’ is an understatement considering it’s been more than 45 years since the EMT 250 was released, and Crystalline feels engineered for music production in 2022.

It immediately stands out with its decidedly postmodern interface. It’s a bold move that may be divisive with producers, but the actual sound of Crystalline is far more agreeable.

There’s a lot to make sense of with this one aside from just the interface, so I’ll break this review down into three important categories: Features (what it does), Sound (how it sounds doing what it does), and Value (is it worth it?).

This is an excellent reverb plugin from Baby Audio. BA are known for producing great-sounding effects that are focused, concise, and eye-catching. With this in mind, Crystalline fits into their lineup like a glove.

If you want an exaggerated, dreamy, and ‘magical’ reverb plugin with a lot of clarity, then Crystalline really delivers.

You can buy it from PluginBoutique or Baby Audio’s website.

Crystalline at its core is a reverb plugin that will appeal to producers after a ‘mix-friendly’ reverb sound. I say this not just because it sounds great (and we’ll talk more about that later) but also because it has a few interesting features that help it fit into any mix.

A next generation algorithmic reverb plugin, Crystalline stands on the shoulders of 60 years of chasing ‘the holy grail of DSP’.

The concept is roughly this: take a classic studio reverb unit from when digital audio was in its infancy, and then beef it up for the modern era.

(I recently reviewed Dreamsynth by Cherry Audio, which is another plugin that is inspired by 70s and 80s studio classics. Read my full review of Dreamsynth here.)

It’s fixed to one reverb ‘type’ (it sounds plate-like but less dark) and though Crystalline is versatile, it’s also one of those plugins that has a particular charm that can be heard in every application.

So rather than trying to be a total reverberation ‘suite’, Crystalline is more focused and less utilitarian than something like Lexicon’s PCM Total Bundle.

Crystalline is a reverb plugin for your DAW. It comes in VST, VST3, AU, and AAX formats.

Crystalline has the following controls available to shape the reverb sound:

In terms of this plugin being ‘mix-friendly’, one really useful feature is the ability to set the reverb and pre-delay times according to the current session’s BPM. For example, this means you can make the reverb decay on the snare die out just before the next hit.

The ‘Shimmer’ control builds on this idea, increasing the reverb time on the higher frequencies by a multiple of the current reverb length. This means the shimmer control scales proportionally to any changes to the overall reverb time.

You get Freeze (FRZ) and Reverse (REV) buttons that can be automated for some very cool atmospheric effects. There’s also a Gate control in the Clean-up section for those powerful 80s snare drums.

You get a lot of useful presets to play with from a variety of sound designers.

The preset browser is a little basic but it looks good and gets the job done. Although I appreciate the number of sound designers Baby Audio has worked with to make the presets, I would prefer if they were sorted by type rather than sectioned off for each individual designer.

You also can’t ‘favorite’ any presets although if you work in Ableton Live for example you can just save your favorite Crystalline patches as Audio Effect Racks so it’s no big deal.

(If you’ve ever felt guilty using presets, ease your mind with Is Using Presets Cheating? (No, And Here’s Why))

In terms of the UI, I am reminded of 2001 A Space Odyssey (particularly the third act). It’s a risky move that pays off, in my opinion.

You can switch between light and dark modes, so it can also look like Death Star tech if you prefer.

Instead of getting dials, faders, or numbers for the reverb controls, you are greeted with various geometric vector graphics. It’s a bit like playing Myst.

But these abstract controls still correlate well to what is happening under the hood, for example the smoothing control changes from a triangle to a circle as you increase it.

This ‘abstract’ design approach would not be suitable for many other synths and effects but there are just enough controls here to stop it from being overwhelming.

Some might still be put off, however. Initially I was hostile myself, but found it quick to get my head around what the controls do and the shapes became less abstract. Besides, you can always stick to the presets, and for many this will suffice.

The real-time display of the reflections and reverb tail is a standout feature and it really makes this plugin feel complete – even if it’s just a visual element with no real effect on the sound. It’s a frequency-based ‘cascading’ graphic that gives you a decent enough idea of how the reverb is behaving.

Crystalline’s UI can be easily scaled by dragging the bottom right corner. In my opinion it looks better when it’s taking up a good chunk of your screen space.

I will say that in a visual sense it can be hard to tell when the FRZ and REV switches are on or off as the light stays the same color regardless of the setting. There is a ‘dimple’ that shows up but it’s not quite as intuitive.

It would also be nice to have a bold font for the tempo division / ms text as it can be a bit hard to read, especially on smaller screens.

Crystalline is very modern and clean sounding most of the time, but can sound like a vintage plate reverb when needed using the damping, tone, and shape controls.

Overall, the reflections stay true to the original sound and are smooth and natural.

Often we experience ‘muddiness’ when using reverb effects and I get the impression Baby Audio strived to avoid this with Crystalline.

The diffusion characteristic is excellent. A lot of reverb plugins will have a ‘chorus’-like effect in the reverb tail that sounds artificial, but I wasn’t hearing that here (at least not on the standard resolution setting).

That’s not to say Crystalline sounds like ‘realistic’ reverberation either, but that’s not the point of this plugin.

It works particularly well on lead sounds as the reverb quality is so gorgeous you will want to hear it on the most important parts of your mix. This of course includes vocals, and you can get into experimental territory with some seriously atmospheric settings if you want to.

The other reason why Crystalline is so good for lead sounds is the ‘Ducker’ control that conveniently cuts the level of the wet signal according to the volume of the dry input. This means the reverb never clouds out the elements that you really want to cut through the mix.

If you want to hear Crystalline in action, you can check out the sound clips below:

Baby Audio Crystalline retails for $99 (but is currently on sale for $49 at an intro price). Compared to other reverb plugins, this is pretty good value, as reverb plugins tend to be more expensive than other plugins anyway. So I’m factoring the competition into this score as well, and though Crystalline is not as diverse or realistic as some other plugins, it makes up for it by sounding fantastic.

As is so often the case, value is subjective and based on your needs as a producer, musician, etc.

If you already have a lot of reverb plugins or are perfectly happy with your DAW’s stock reverb effect, then this plugin is not essential. But it’s still worth checking out the free demo and the sound clips above to see if it sparks something with you.

I say this because it’s the sort of reverb that would really appeal to fans of dream pop, cloud rap, atmospheric techno / house, synthwave, and any genre where reverb itself can be considered an instrument. For these producers, the value of Crystalline increases immensely.

It’s a very ‘high quality’ sound that will use more CPU than your DAW’s stock reverb for example, but I wouldn’t say this plugin is CPU hungry compared to other reverb VSTs. You can always use ‘Eco mode’ which fixes the resolution to basic, disables shimmer, and cuts CPU usage down considerably.

A next generation algorithmic reverb plugin, Crystalline stands on the shoulders of 60 years of chasing ‘the holy grail of DSP’.