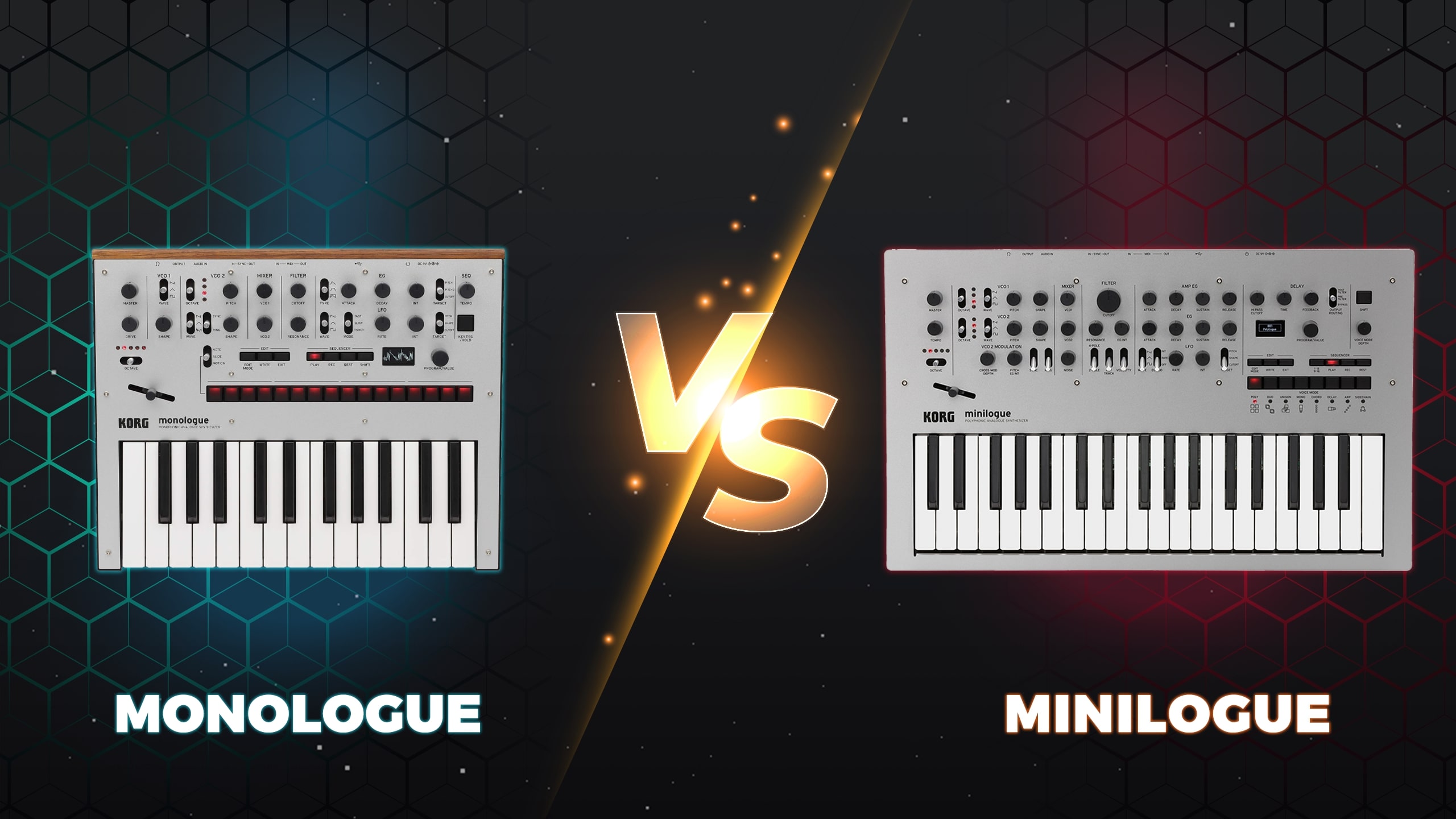 Korg Monologue vs Minilogue (Differences & Which To Buy)

Korg’s Minilogue and Monologue took the analog hardware synthesizer market by storm when they were released. Both are quality synths with loads of features and are very reasonably priced.

With the two having similar names and looks, it’s easy to think they would sound the same or that one is simply a smaller version of the other.

This isn’t the case, and if you’re in the market for a Minilogue or Monologue, you’ll need to know the pros and cons of each. Let’s find out which one makes the most sense for you.

The starkest difference between the two synths (aside from price) is that the Minilogue is a polyphonic synth and the Monologue is monophonic.

The Minilogue sports four-note polyphony, meaning can play up to four notes at once, whereas the Monologue is only able to play one note at a time, being mono-phonic.

So if you’re envisioning yourself playing chords or lush pads, there’s really only one direction to go here.

Now that’s not to say that the Monologue doesn’t have its merits, because it very much does for bass and leads, but if you are after polyphony it just won’t cut it.

Between the Minilogue's Voice Modes and the onboard 16-step sequencer, you'll be amazed by the sounds you can come up with. 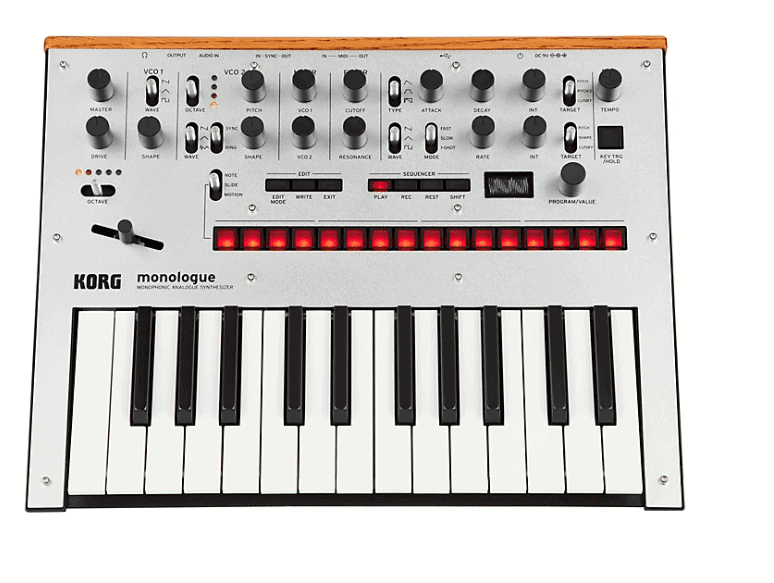 Less can be more, but really, why go for one voice when you can have, well, more? In the shortest of terms, cost, but also use case.

Again – the polysynth sounds better, but will cost more.

Polyphonic analog synths are made by physically duplicating the same circuitry for one voice multiple times.

With this in mind, it’s pretty impressive that the Minilogue is so light and portable.

In contrast, mono synths can be less expensive (emphasis on the can, looking at you Moog). They generally have a smaller footprint as all the hardware is just for one voice. If space is a factor, this should be taken into account as well.

Monologue vs. Minilogue: Which Is The Better Synth?

The term ‘better’ has multiple meanings here. In terms of pure features and capability, the Minilogue is better, and that’s why it costs more.

But some people will prefer the Monologue for a variety of reasons. Maybe they already have enough polysynths and just need something to handle bass, leads, and SFX. To them, the Monologue is the better synth.

Below we’ll look at the specs of each synth and compare their features and overall sound.

Between the Minilogue's Voice Modes and the onboard 16-step sequencer, you'll be amazed by the sounds you can come up with.

These offer great flexibility in shaping your sound from simple waveforms to something much more complex. There is also a drive distortion knob that can really crank up the dirt.

Much of the voice structure of the Minilogue can be seen in the Monologue as well. Dual VCO, one LFO, a sequencer, and a lowpass filter.

Don’t let this fool you. The Minilogue has many additional features that make it a much more powerful sound design tool and one of my personal favorite synths.

Having all of these options on the two VCOs, as compared to only one in the Monologue, really opens up the sound design possibilities with the Minilogue.

One of my favorite features of both synths is the real-time OLED oscilloscope. Here you can visually monitor your waveshape in real-time.

If you’re learning about synthesis this is a really nice way of showing you how oscillators and filters work. Also it just looks super cool.

In addition to these synthesis parameters, Korg also added micro tuning capability with the Monologue (and the Minilogue via a firmware update). Apparently, Aphex Twin had a hand in modeling the micro tuning and also designed some of the presets for the Monologue.

As mentioned, The Monologue includes 80 presets and 20 user slots. Many of the presets also come preloaded with sequences to show off some of its capabilities.

They definitely lean into Aphex Twin territory given his involvement, but as a synthesizer, its very versatile and suitable for a number of styles.

Korg added 8 ‘voice modes’ to the Minilogue, and this is probably one of its best features. The voice modes change how the four internal synth voices are used in a patch.

The voice modes are:

The voice modes, especially the unison, mono, and arp, are really useful and a great addition.

Korg didn’t skimp on the patch storage either, doubling the Minologue’s sound storage by giving you 200 sounds you can save and play with.

For the Minilogue, the 16-step sequencer works the same exact way that the Monologues does, but there is one glaring difference.

The sequencer on the Minilogue uses 8 buttons despite being 16-step.

Having to watch the sequencer go around again to the first step and recall that it’s actually the ninth step is really frustrating sometimes. If there’s one huge criticism I’d have of the Minilogue, this is it. But to be fair, it would be tricky to fit on another row of buttons without raising the cost.

Back over to the Monologue and the sequencer is on the light side and has 16 steps. It also has four automation lanes for recording knob movements.

So while a sequence is playing you can add a filter sweep that plays automatically, leaving room for three other automated controls.

More steps are always better with sequencers, but the Monologue is a playing synth first, so I’m not necessarily too upset by this. You can always sequence from external gear as well via MIDI.

Along with the VCOs is a 2-pole filter with cutoff and resonance. The Monologue’s filter is really nice and tuned to work with leads and bass lines.

It offers a very smooth cutoff and enough resonance to get those classic 303 style chirps going in no time.

The Minilogue’s filter has the notable advantage of including a switch to change between 2-pole or 4-pole filter slopes.

This allows for more fine filtering of the cutoff frequency and is a nice touch for sure.

This filter is really nice and the big cutoff knob is always calling out to you to fiddle with. This is definitely one of my favorite features on the Minilogue and something that is sorely missed on the Monologue (it’s just a regular sized knob).

On the envelope generator (EG) side of things, the Monologue has three targets on offer: VCO1 pitch, VCO2 pitch, and filter cutoff.

Elektron Digitakt vs Digitone (Differences & Which Is Best?)

With the additional targets, you can really make some nice moving and complex sounds by playing with the envelope modulation amount.

With the Minilogue, you get two envelopes: EG and Amp EG. The second one can modify the pitch of VCO2, the filter cutoff, or the speed or intensity of the LFO.

The LFO here also has some added modes with three waves, 3 EG mod modes (int, rate, off), and routing to one of three destinations (pitch, shape, filter cutoff). Lots to play with here, even with only one LFO.

Having just a single LFO might seem limiting, but it does mean you are forced to use it wisely.

The inclusion of a delay effect on the Minilogue is very nice, and the cherry on top of a feature-packed polysynth as it is. It’s a very dark sounding delay reminiscent of dub echo, and it’s also notorious for being noisy with longer settings.

There’s a high-pass filter before the delay and a switch to determine if the signal is sent to the output before or after the HPF. The delay effect can go wild in a really fun way if you are brave enough.

Another really nice feature of the Monologue is that it is battery-powered. It’s stated to last for approximately six hours on six standard alkaline AA batteries.

For those on the go or looking to free up some cable clutter, this is a great feature.

In regards to the Monologue, the housing is brushed aluminum with five color options and has a nice wood backside that really classes it up. Both synths are solidly built and yet are surprisingly light and portable. How many analog polysynths can you carry to your friend’s house for a jam?

The parts outside of the face and rear are made of plastic, but it hardly feels cheap. Knobs are well made and do not wiggle much at all. Overall it has a nice build quality.

The Minilogue’s housing is the same nice brushed aluminum with a wood rear, but I will say, having about 41 knobs on the face (including the big cutoff knob) really makes this synth look impressive.

While it may seem intimidating, the Minilogue is also a great synth to learn synthesis with. With a basic knob-per-function layout and oscilloscope, this really is a great learning tool. Not to mention getting hands-on with a synth is way more fun than using a plugin.

If you’re looking for that nasty bass or lead for your lineup or just want to get your feet wet with synthesis, the Monologue is a great place to start.

On the other hand, if you’re looking for a very versatile, feature-packed analog polysynth at a bargain price of $549, the Minilogue is an easy choice.

Korg’s Minilogue and Monologue are two great synths that are very affordable. For all intents and purposes, the Minilogue is simply bigger and better, but you may not need everything it offers.

If you just need a mono synth, go for the Monologue. While the Minilogue can do mono, it has a reputation for being a bit thin-sounding in this area. But the Monologue really excels for bass and lead sounds.

So the choice isn’t the most obvious, but at the price they’re offered, both really are a steal.

So Mini, or Mono? If you’re still not sure, listen to some demos on YouTube and let your ears (and your wallet) decide.

Is the Korg Minilogue velocity sensitive?

Yes, this can be toggled as well.

Can you use the Korg Minilogue or Monologue as a MIDI controller?

Yes, both are able to transmit and receive MIDI data.

Is Korg Monologue stereo or mono?

The Monologue outputs a mono signal.