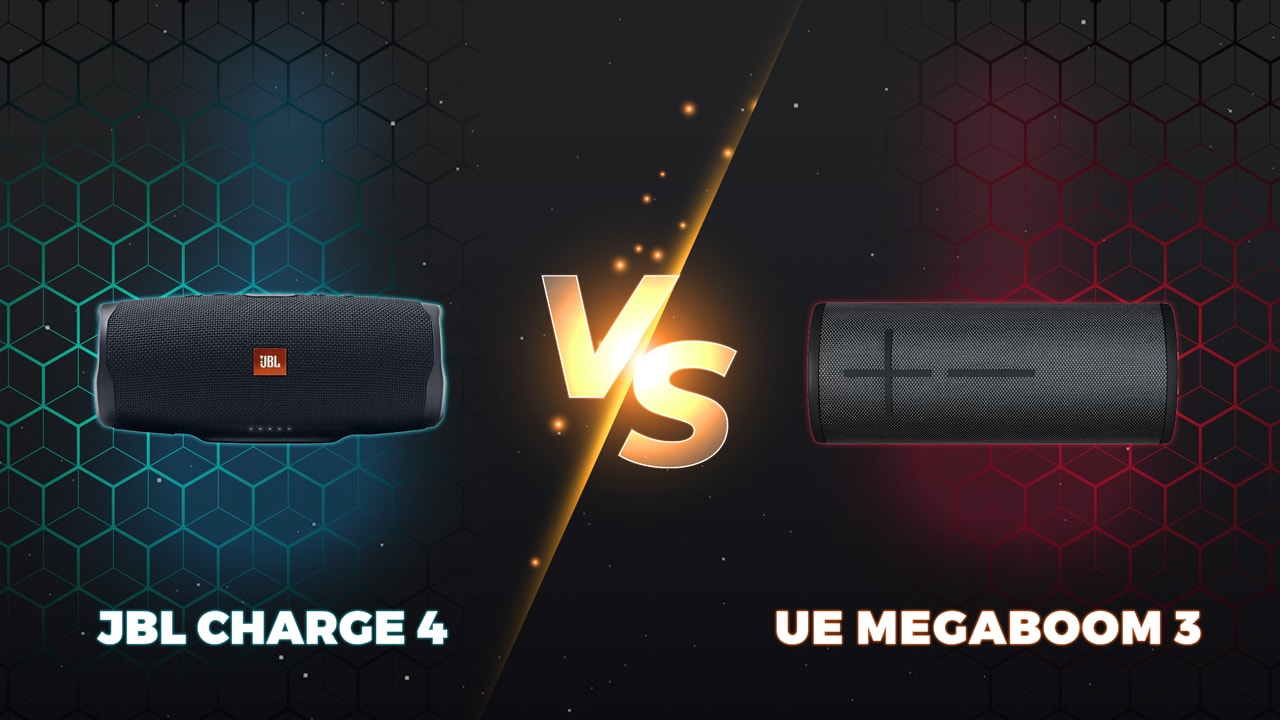 Producer Hive·
Bluetooth Speakers
Disclosure: We may receive commissions when you click our links and make purchases. Read our full affiliate disclosure here.

The JBL Charge 4 and the UE Megaboom 3 are in the same class of Bluetooth speakers and have many similar characteristics.

When comparing the two, the Megaboom 3 comes out on top by a small margin because of its superior sound design, loudness, and software functionality.

However, JBL has recently come out with the JBL Charge 5, which may even better the Megaboom 3 with its improvements.

I think you can’t go wrong with either one, and the winner will be subjective to the audience depending on what they value most in a speaker.

By the way, in case you’re interested — we also have a post on the loudest JBL speakers ever made.

JBL Charge 4 vs UE Megaboom 3: Which Speaker Is Better?

The JBL Charge is slightly cheaper at $115 USD compared to $130 USD with the Megaboom 3.

When it comes to the soundstage, the perceived size, and width of the sound created by the speaker, the directionality of the sound, and whether the reproduction is stereo or mono.

The Megaboom 3 blows the JBL Charge 4 out of the water, as it has omnidirectional sound.

This ensures it sounds the same from all angles, which is ideal for outdoor use and parties. The frequency response of the Megaboom 3 is also a little better than the JBL Charge 4, according to testing.

Introducing the JBL Charge 4 - a portable Bluetooth speaker with full-spectrum, powerful sound, and a built-in power bank to charge your devices.

When comparing the battery life of these two products, it is a very close call. At-home tests have revealed that the Megaboom 3 supplies 10 hours of battery at 60% and 5 hours at 85%.

But where the Charge 4 wins is the fact that you can charge it in 4 hours with its USB-C port, and also charge other devices through it, whilst the micro-USB Megaboom 3 is a little bit slower and doesn’t have that capability.

The Megaboom 3 wins by a lot in this department. With the UE app, you can customize the lows, mids, and high frequencies.

With the Megaboom 3, you also get frequent firmware updates via the app while the JBL app is sluggish to update and doesn’t allow you to edit any settings. The speakers also stay in sync more and don’t cut as much.

Both of these speakers are waterproof and will float if left in water, and have the same waterproof rating of IPX7.

In most categories, they are fairly similar and it’s a close call, but the Megaboom 3 is shockproof and dustproof while the Charge 4 is not, so it wins this battle of the toughest speaker contest.

This may be a personal taste, but the design of the JBL Charge 4 looks a lot cooler than the UE Megaboom 3.

If I were a customer in a store and I knew nothing about the two, I would definitely choose the JBL Charge 4 because of its pretty design.

These two products are very similar to one another, and you can’t go wrong with either.

Even though it is 15 dollars more expensive, and the JBL’s design is smoother on the eye, the sound is more important when considering the best speaker, and the Megaboom edges the overall ranking because of its sound.

Is UE Megaboom Better Than JBL?

In the battle between these two particular Bluetooth speakers, the Ultimate Ears Megaboom 3 has come out on top over the JBL Charge 4. However, that is not to say that Ultimate Ears is better than JBL.

Which JBL Speaker Is The Loudest? (Sorry, Neighbors)

JBL released the JBL Charge 5 in April of 2021 which has significant improvements over the JBL Charge 4 that may put it above the 3rd iteration of the Megaboom speaker.

Each company also has a wide variety of products that make them hard to compare overall.

Although slightly more expensive and less pretty in its design, Ultimate Ears has made a great product with the Megaboom 3 that outclasses the JBL Charge 4 in a close shootout.

Its frequency response, software functionality, overall loudness, increased durability, and omnidirectional sound give it the edge over the JBL Charge 4.

Does JBL Own Ultimate Ears?

Is It Worth It To Buy JBL Charge 4?

I would say no. It would be a better decision to go out and purchase the JBL Charge 5 instead unless you are getting a fairly good deal for the JBL Charge 4.

The Charge 5 is $30 more expensive, but the Charge 5 is dustproof, has improved water resistance (you can submerge it for up to 30 minutes in water), has better battery life, and has a more balanced sound profile.

Which Is Bigger JBL Charge 4 or 5?

The Charge 5 is slightly bigger than the Charge 4. It also has an updated BlueTooth software, a better bass driver, is dustproof and more water-resistant, and more power going through it.

Is JBL Charge 5 Stereo or Mono?

The JBL Charge 5 is a mono speaker, however, you can connect two of them together using JBL’s PartyBoost feature and create a stereo sound.

Is There A UE Megaboom 4?

No, there is no scheduled release date currently for the UE Megaboom 4.

However it is getting around that time to when they should have a new iteration, but there is no word yet of when the release date will be or what features it will have.

Can UE Boom Connect To JBL?

No, UE Boom is not compatible with JBL. You can only connect the UE Boom to another UE Boom or a UE Megaboom via the Boom or Megaboom app.

With JBL, you can only connect it to other JBL speakers that have the PartyBoost feature.

Yes, the Megaboom 3 features IP67 water and dustproof rating. It can be completely submerged in water for up to 30 minutes and will float in the water without being damaged in any way.