Rodrigo Sanchez
Audio Interfaces
Disclosure: We may receive commissions when you click our links and make purchases. Read our full affiliate disclosure here. 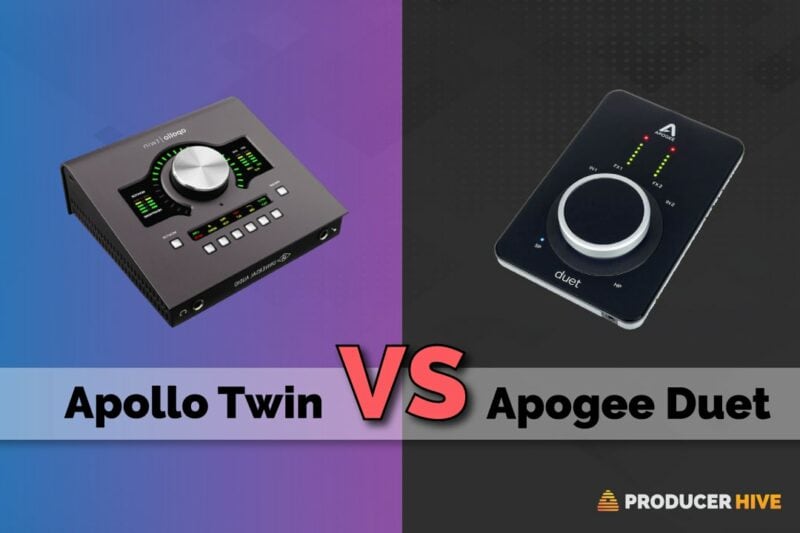 Choosing the right audio interface is a serious endeavor. You’ll likely be spending hundreds of dollars, and it is imperative to get one that fits your needs.

Two of the most popular premium interfaces in the market are the Apogee Duet 3 and the Apollo Twin X DUO. Both feature fantastic features, sound, construction, and overall value.

Although both of these interfaces are sturdy and reliable, they also have their differences. The main one being that the Apollo Twin is significantly more expensive than the Duet 3.

At the same time, the Apollo Twin series gives you access to a comprehensive ecosystem of fantastic software emulations and more, thanks to the powerful Universal Audio platform.

On the other hand, the Duet 3 is easier to use, and you’ll be recording in no time compared to the Apollo Twin X.

Who Are They For?

If you want quality, convenience, and to stay under the $1000 mark, I’d go with the Apogee Duet 3. This interface is fantastic for songwriters that want to lay down ideas and do some serious pre-production.

On the other hand, if you want to throw down a few hundred dollars more for (slightly) better sound, and a seemingly endless amount of plug-ins, effects, and features, then the Apollo Twin X DUO is the way to go. For those who want even more on-board processing power, there’s the Apollo Twin X QUAD.

Apollo interfaces come in different models. You can get a 2 x 4 Apollo Solo for your project studio, and go all the way up to an 18 x 20 Apollo 16, which is for larger studios running several mics at once. Naturally, the price will also increase as you get more I/O options and features.

On the other hand, the Apogee Duet 3 is strictly a 2-in/4-out USB-C Audio Interface with 2 microphone preamps and hardware DSP. In other words, you cannot pick a Duet 3 with more I/O options like you can with the Apollo.

That said, the Duet has been one of the most popular and best interfaces for songwriters for years. This is partly because songwriters typically do not require more than a 2-in/4 out interface.

Ultimately the Apollo Twin offers more IO options than the Duet 3 as it is a 10-in 6-out interface.

Both interfaces look similar enough, clearly gunning for the same basic look that Apogee pioneered with the original Duet. Most notably, both feature a big circular dial very prominently in the middle, along with LEDs to indicate the level of the input and output.

The Apollo series interfaces offer much more in the way of buttons and signal meters and are ultimately more impressive. This is an interface you want to show off, whereas the Duet 3 is more humble, sleek, and minimalist.

For those who are considering a small interface for traveling, the Duet 3 ships with a travel case that protects it, fits it snugly, and allows for easy and safe transportation.

Despite their obvious differences in I/O options, it is fair to say that both the Apollo Twin series and Apogee Duet 3 are comparable when it comes to sample rate and connectivity. As far as the sample rate and resolution, both offer a 24-bit/192kH.

The Apogee Duet 3’s mic preamps are built with the company’s Advanced Stepped Gain Architecture. This is an analog circuit that dynamically optimizes across a 0–65 dB gain range to provide exceptional bandwidth with the lowest possible distortion.

Contrast this with the Apollo’s fantastic A/D resolution of 24-bit and sample rate of 192 kHz which ensures optimum sound quality. You also have a pristine signal path with 127 dB of dynamic range, plus Unison technology for the preamps.

Regarding connectivity, the Twin is a Thunderbolt 3 audio interface. Thunderbolt 3 also happens to be the most notable upgrade for version three of the Duet.

(If you want to learn more about sample rate and bit depth, you can read our guide What Sample Rate Should You Use? (Myths and Misconceptions))

When it comes to software, the differences between the two become more noticeable as the Apollo Twin series absolutely has the Duet 3 beat when it comes to extra digital goodies.

It is well known that one of the main calling cards of Apollo interfaces is the superior UAD analog emulation plugin collection that transforms these interfaces into full-blown production stations. This is a massive feat, as you can incorporate legendary sounds in your mix with authenticity. This allows you to work with tools that are not only iconic and very useful, but also quite expensive in their original hardware form factor.

Not to mention, you would need much more than just ‘desktop space’ to stack the analog gear that the UAD plug-ins accurately emulate.

Apollo interfaces come with the Realtime Analog Classic Plus bundle which includes the following: LUNA features what UA calls Accelerated Real-time Monitoring. This supplies fast analog-style tracking and overdubbing through the use of the onboard DSP acceleration in your Apollo interface.

Although LUNA might appeal to some that are just starting out, chances are most folks will stay with their tried and true software DAW, and the Apollo will work just fine here as well.

One significant drawback for the LUNA software is that it is Mac only. Naturally, that will turn a lot of folks off, and will severely limit UA’s audience for their flagship DAW. Additionally, LUNA requires a Thunderbolt-equipped Apollo or Arrow interface and will not work with any other interface.

You may have noticed we haven’t yet mentioned the Duet in this section at all. It’s not that the Duet 3’s bundled software is bad, it’s just that it comes with relatively little in this area, especially compared to the Apollo’s gigantic offering of emulations alongside the LUNA DAW.

Additionally, the Duet 3 comes with Apogee’s ECS Channel Strip, which contains superb-sounding EQ, compression, and saturation – all adjusted to perfection by Bob Clearmountain. On top of that, you also get Apogee Control 2 software for complete control of all of the Duet 3’s functions and features, including the ECS Channel Strip, along with the Apogee Channel FX plug-in that allows you to adjust preamp gain, turn on phantom power, set monitor levels, and control and print ECS Channel Strip effects straight from your DAW.

Regardless of the Apollo model in question, the quality and amount of features you get is quite impressive, whereas the Duet 3 is a more limited interface (albeit a high quality one, just like the Twin).

In other words, the Duet’s bundled software is fantastic, but the Twin’s are more comprehensive, expandable, and of such incredible quality that there is no room for competition in this area.

When comparing the two, it is genuinely hard to pick one over the other. Both interfaces are fantastic for recording enthusiasts and offer premium quality features.

Their price differences, ease of use, and functionality indicate that each model would have a specific user in mind. For the musician or bedroom producer that wants to lay down ideas easily without having to pay $1000, the Apogee Duet 3 is a fantastic choice.

On the other hand, if you want the absolute best sound for your music production, endless features, high-quality software emulations, and are willing to pay for it, then the Apollo Twin X DUO is your best option.