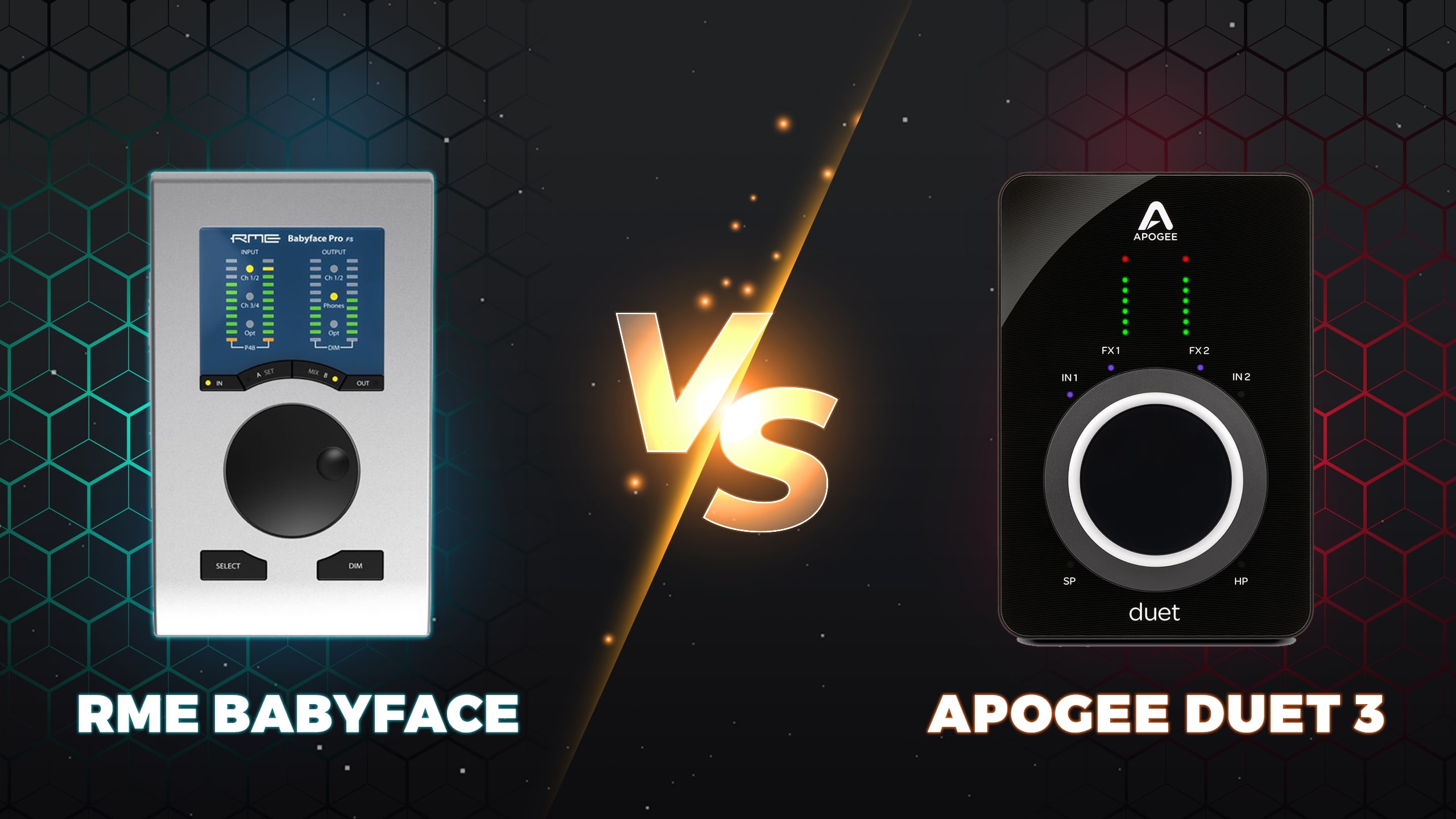 Choosing your audio interface is critical, as this is the tool that will connect the instruments and voice with your software DAW.

How good that connection is, and what options it comes with matters a lot.

In this world of seemingly endless options, it is imperative to get an interface that fits your needs.

Two of the best choices in the market today are the RME Babyface PRO FS and the Apogee Duet 3.

Both come with fantastic features, impressive sound, solid construction, and overall value, which is quite an achievement considering their small size.

RME Babyface PRO FS vs Apogee Duet 3: Which One is Better?

Although both of these interfaces are truly fantastic, they also have their differences. The one that will likely impact potential buyers the most is the price difference.

The RME Babyface PRO FS is more expensive than the Duet 3. At the time of writing, the Babyface costs 350 dollars more. Having said this, the Babyface interface offers other features that might be worth the price difference. It features more simultaneous inputs as well as no breakout cable.  On the other hand, the Apogee Duet 3 has a simpler and streamlined design that makes it more intuitive to use.

The best one for you will largely depend on your situation and what you use your interface for.

Here’s where they differ:

Who Are They For?

If your budget is limited, but you still want pristine sound, convenience, and an easy-to-use interface, I’d go with the Apogee Duet 3.

This interface is fantastic for songwriters and producers on the go that want something powerful and simple.

On the other hand, if you want to lay down a few hundred dollars more for more inputs, and you also don’t want to deal with a breakout cable, then RME Babyface PRO FS is the interface for you. The RME Babyface PRO FS comes with an impressive set of I/O for such a small interface.

The Babyface also comes with two headphone outputs (one is 1/4″ and the other 1/8″, and you basically have to choose one or the other, as they are not independent).

On the other hand, the Apogee Duet 3 is strictly a 2-in/4-out USB-C audio interface with 2 microphone preamps and hardware DSP.

What this means in practical terms is that you have more I/O options with the RME Babyface PRO FS.

For instance, let’s say you want to record a singer that also plays guitar, but you want to capture it all at once, with the guitar on a stereo mic setup. You can do that with the Babyface, but not with the Duet 3 (as the latter only allows for 2 simultaneous inputs).

That said, the Duet has been one of the most popular and best interfaces for songwriters for years. This is partly because songwriters typically do not require more than a 2-in/4 out interface. As we mentioned above, it all depends on what your needs are.

Despite the evident contrasts in I/O options, it is fitting to say that both the RME Babyface and the Apogee Duet 3 are similar when it comes to sample rate and connectivity. As far as the sample rate and resolution, both offer 24-bit/192 kHz quality audio.

The Apogee Duet 3’s mic preamps are created with the company’s Advanced Stepped Gain Architecture. This is an analog circuit that dynamically optimizes across a 0–65 dB gain range to deliver outstanding bandwidth with the lowest possible distortion.

Contrast this with the RME Babyface’s microphone preamps with their signal-to-noise ratio of 113.7 dB, and line/instrument inputs of 116.3dB. The Babyface Pro FS employs the same high-quality output op-amps as the company’s sought-after ADI-2 Pro AD/DA converter.

Speaking of the ADI-2 PRO, one of the Babyface’s most impressive features is the SteadyClock FS circuit, which is the same included on the ADI-2 PRO.

This ensures ultra-stable clocking and takes self-jitter to new lows, for amazing performance and stability.

Further output options for the Babyface include a +19/+4dBu switch which reduces the interface’s output level, improving its signal-to-noise ratio for sensitive active monitors. This can help avoid overloads and distortion.

Both of these interfaces offer a pristine sound that will capture the source without coloring. To my ears, the Babyface is the superior one in terms of pure sound, but the difference is small.

(If you want to learn more about why sample rate and resolution are so important in digital audio, make sure you read What Sample Rate You Should Use? (+Myths & Misconceptions))

The Babyface comes with the powerful TotalMix FX software engine that offers latency-free processing with a 3-band EQ, low-cut filter, reverb, and echo. TotalMix FX is a fully flexible 288-channel mixer with a 46-bit internal resolution.

This dual-DSP system uses one DSP chip for monitor mixing, leaving the other free for latency-free effects and processing. As impressive as the TotalMix FX is, there is more software power on the Babyface.

RME also included a plug-in bundle that comes with Scuffham’s S-Gear, a flexible guitar amp simulator that was created by a former product designer from a legendary British amplifier company (try and guess which one).

Also in this bundle is Brainworx bx_opto, which yields classic optical-style compression with a streamlined interface. On top of that, there is also bx_masterdesk, which reproduces the sound of a high-end analog mastering system.

On the other hand, the Apogee Duet 3 features onboard DSP that lets you shape your sound at the input stage with zero latency.

Besides, the Duet 3 comes with Apogee’s ECS Channel Strip, which includes superb-sounding EQ, compression, and saturation — all adjusted to perfection by the legendary mastering engineer Bob Clearmountain.

You also get Apogee Control 2 software for complete control of all of the Duet 3’s functions and features, including the ECS Channel Strip, along with the Apogee Channel FX plug-in that allows you to adjust preamp gain, turn on phantom power, set monitor levels, and control and print ECS Channel Strip effects straight from your DAW.

If you are on the market for a small interface for traveling, both the Babyface PRO and the Duet 3 are compact enough to carry around.  Whether you want to record in hotel rooms or even outside, these interfaces will have you covered.

As is common with many interfaces of this size, the Apogee Duet 3 features a breakout cable. However, the RME Babyface does not.

For some folks, this might make a difference. Although a break-out cable does not bother me at all, I understand that it is not as stylish and does not contribute to the tidiness of your work environment.

Apogee took note of this and created a dock that you can attach to the Duet 3 to avoid having to use the breakout cable.

This dock is sold separately and will cost you $179. Is it worth it? I’ll let you and your need for tidiness decide that.

On that note, the Duet 3 comes with carrying cases, further proving the point that it is fantastic for traveling and storing. Contrast that with the RME Babyface, which does not come with a case.

It is important to know that both interfaces are compatible with Mac and Windows systems.

So if you are on a tighter budget but want great sound, ease of use, and a very slick user interface, the Apogee Duet 3 is a great choice.

On the other hand, if you want more I/O options, do not like breakout cables, or want more control, then the Babyface is the one for you.

It is not a clear-cut choice on which of these two USB interfaces to pick. Both are very similar and their differences will cater to specific needs.

Their price differences, ease of use, and features suggest that each model has a distinct user in mind. If you’re still not sure, check out some demos on YouTube and read some customer reviews to help you decide.