What Guitar Pedals Did Jimmy Page Use? 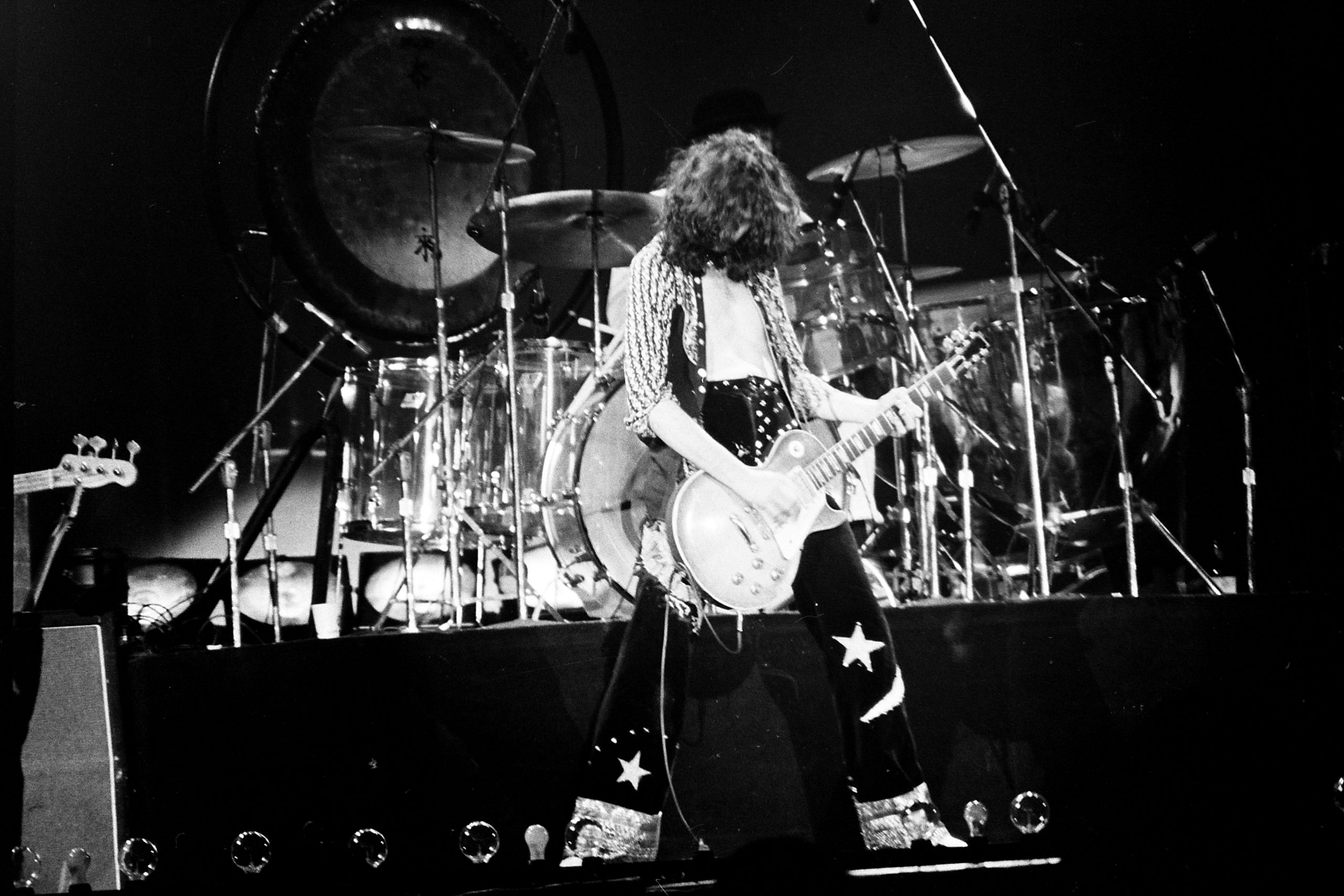 Led Zeppelin, and more specifically Jimmy Page, have written some of the most famous songs in rock music.

Nowadays Jimmy would be classed more of a classic rock guitarist. From tracks like the iconic Stairway to Heaven to the bluesy swagger of Black Dog, his talent for writing a great song can’t be denied.

On each Led Zeppelin album, Jimmy’s guitar work remains equally as impressive and he really has been able to carve out his own unique style.

Whilst anybody could learn to play a Led Zeppelin riff, not everyone can directly imitate Jimmy’s passionate playing, phrasing, and vibe.

But what guitar pedals did Jimmy use to create those iconic guitar tones?

In this article, we’re taking a look at some of the gear and pedals that Jimmy used on some of Led Zeppelin’s most famous tracks.

What guitar pedals did Jimmy Page use?

One of the pedals Jimmy is famous for using is the Tone Bender.

This pedal is a classic fuzz that grew in popularity during the 60s and 70s. It was favored by players like Jimi Hendrix and Jeff Beck as well as Page.

First released in London in 1965, the tone bender originally came housed in a wooden box with two very simple controls ‘Level’ and ‘Attack’. Over the last 50 years, this pedal has been produced in many incarnations.

The MkII was used by Jimmy in the early Led Zeppelin years and this can be heard across their first album.

Fuzz does differ in many ways to overdrive and distortion but if you’re looking for a great Tone Bender soundalike you can try Park Fuzz Sound Pedal.

Alternatively, if you want something really authentic then Macaris is worth getting in touch with. There is a waiting list, and the pedal is pricey, but this is possibly the closest to the original tone that you will get!

The Blue Box from MXR is a monster distortion pedal, giving you both an aggressive fuzz that'll rip your head off and an unpredictable two-octave-down tone generator.

If you’ve heard the guitar solo in ‘Fool In The Rain’, then you’ll know Jimmy uses much more than just a straight-up distortion sound.

The now-iconic passage uses the Blue Box to create a duplicate guitar signal two octaves lower than the original which can then be blended with fuzz.

The Blue Box Octave Fuzz created a pretty unique guitar tone and one you might not immediately reach for when thinking of a guitar solo. But Jimmy had a vision for how it should sound, and ultimately this is one of the effects pedals that helped create a really memorable guitar solo.

Interestingly the Blue Box was somewhat of a failure when compared to other pedals in the range. Nonetheless, it played a significant role in creating this legendary solo!

Blue Boxes are relatively cheap, so if you’re looking for something interesting to add coloration to that pedalboard we’d definitely recommend picking one up.

Check out our list of the 7 Best Octave Pedals That Blow The Competition Away.

A more experimental pedal in Jimmy’s rig was the Echoplex EP-2 Tape Delay.

Jimmy actually had a couple of uses for this pedal, one was for its actual intended purpose of creating a delayed tone, but he also utilized it to add thickness to his guitar lines in the studio, with a much shorter, slapback style delay.

The pedal itself worked by recording a sound onto magnetic tape, which in turn is played back with an added feedback option to feed the delay back into itself and create several repeats.

Famously, Jimmy used a violin bow to create something really unusual in his playing, and this was occasionally used in conjunction with the EP-2 for some of the bow sections, particularly in Whole Lotta Love.

Later in the 60s, the EP-3 was released that Jimmy often kept in his signal chain even when not using the delay function due to the fact that he loved the preamp sound.

Luckily Echoplex effects pedals are very easy to get hold of, so if you’re looking to recreate Jimmy’s famous tone you can grab one for around $120.

Jimmy was famously known for being an avid collector of effects pedals, and more specifically wah pedals.

There wasn’t necessarily a ‘go-to’ Wah pedal for him, but he was known for using a Vox Wah in the earlier days of Led Zeppelin, which was reported to have had some modifications.

In the 1970s Jimmy reportedly swapped this out for a King Wah. Interestingly, Page reportedly used a Wah on the solo for Whole Lotta Love, but not as you may think.

Rather than rocking the foot pedal to create the famous filtered effect we all know, the pedal was engaged toe down to create a super trebly tone.

If you listen to the solo knowing this it’s hard not to hear that cutting timbre slicing through the mix!

What Guitars Did Jimmy Page Use?

The band has an extremely eclectic back catalog so it’s no surprise that, much like effects pedals, Jimmy used several different guitars both in the studio and live.

Two of the more famous electric guitars Jimmy was known for using were the Danelectro 3021 and a Gibson Les Paul DeLuxe. He was also known for using a Fender Telecaster.

Pure and simple, this instrument features classic Fender tone styling that evokes and honors the timeless Fender mainstays that came before it and contributed crucial DNA.

Jimmy also used to perform with a double-necked Gibson guitar which was used to pull off all the guitar parts in Stairway to Heaven.

Gibson regularly produced these in the years previous to Stairway to Heaven, however, by the point this song was released they had stopped production on these models. Leading them to be much sought after by fans of the band!

Performing the song live proved a challenge for Jimmy as he needed access to both a 12 and 6-string model.

Jimmy ordered a custom EDS-1275 specifically for this purpose and this is the guitar you will see him playing so often live.

The guitar Jimmy is most often associated with however is his 1959 Gibson Les Paul Standard with a sunburst finish.

Jimmy used several different acoustic guitars during his time with Led Zeppelin. In the late 1960s, he used a Gibson J-200 that he’d borrowed from his friend Jim Sullivan.

This was used exclusively for the acoustic parts on their debut album.

In the 1970s he was known for using a Martin D-28 live, reportedly bought at the start of the decade. The guitar was eventually fitted with a Barcus-Berry preamp after having previously needed to do the whole microphone thing to be heard.

Another guitar used in the early ’70s was the Harmony Sovereign H1260 which you’ll hear on Stairway to Heaven. This guitar was used on both Led Zeppelin III and Led Zeppelin IV.

If you’re searching for Jimmy’s secret sauce, don’t forget to read 3 Essential Pickups Jimmy Page Used To Get His Tone.