What Are Baritone Guitars (Who Plays Them, & Why Use Them?)

Vinny Kaul
Ask The Hive
Disclosure: We may receive commissions when you click our links and make purchases. Read our full affiliate disclosure here. 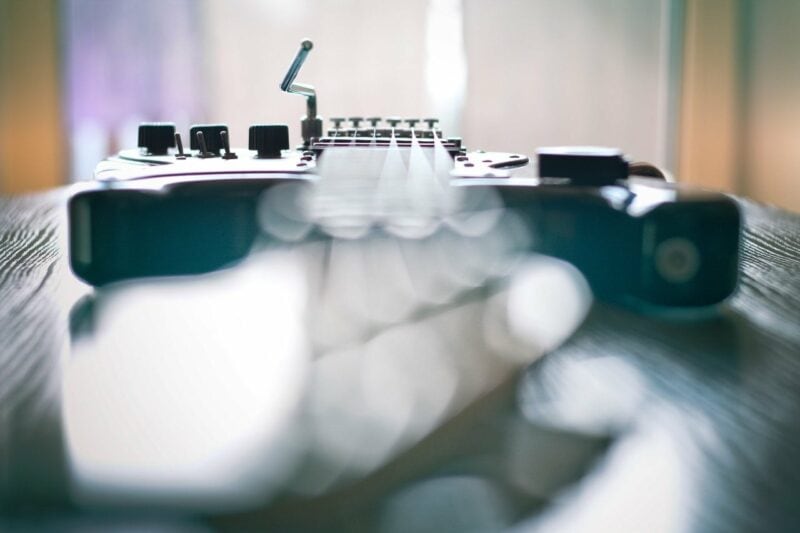 A baritone guitar is to a regular guitar as a viola is to a violin. In terms of the pitch, they sound like a six string bass if you put a capo on the 5th fret.

Or, you could say that baritone guitars sit halfway between the register of a bass guitar and a standard electric guitar.

The legacy of the baritone electric extends well beyond the status of a “drop-tuned metal guitar”“. The acoustic versions have been around since the 1800s, but the electric baritones – as we know them today – only hit the scene in the 1950s.

They have had significant stints in genres ranging from surf to jazz to rock and metal. They stuck out their neck – a rather long neck at that – for the likes of Stephen Carpenter, Pat Metheny, Brian Welch, John Petrucci, and numerous other guitar icons.

You may have heard the term Baritone when talking about singers as well.

So, why play a baritone guitar?

In this post, we unpack the mystery of baritone guitars, tracing their journey from spaghetti westerns to Nashville studios to the rock/metal realm and beyond.

What Is A Baritone Guitar?

A baritone guitar refers to an acoustic or electric guitar with a long(er) scale that is tuned below E (but not by a full octave).

Generally, baritone guitars feature a 27-inch+ scale length, thicker strings, and in the case of acoustic guitars – a bigger body to resonate at lower frequencies. They typically ship with B to B tuning and retain taut string tension and good intonation.

Baritone guitars sport a longer-than-usual scale to maintain usable string tension at lower tunings. Most baritones have a scale ranging from 27 to 30.5 inches as compared to the 24.75 to 25.5-inch scale length range of standard guitars.

When you tune a regular guitar lower, the strings get loose and floppy and the lower you tune it, the worse it gets. Anything lower than a whole step might be playable, but poor string tension complicates fretwork.

But the longer scale makes it possible to tune baritones really low without this problem.

From extended range onslaught in rock/metal to deep alternative tunings, electric baritones are a ticket to an expansive sound.

If you endorse variety, a baritone is unquestionably less ‘out-there’ compared to fanned frets and fretless solid bodies (Vigier Excalibur, anyone?).

Electric baritone guitars are more emotive and can spark some creative ideas without having to relearn the instrument. If that is not enough, here are a few added reasons to add a baritone guitar to your collection:

Ever wondered what makes a Martin 00 different to an 000 body size? Check our our article here!

How Do You Tune A Baritone Guitar?

Generally, acoustic and electric baritones are tuned to a perfect fourth below the standard EADGBE tuning. This is called the B to B tuning – BEADF#B.

That said, there is no “standard tuning” for baritone guitars. Some guitarists tune them A to A (lower by a perfect fifth) and C to C (lower by a major third). On the other hand, the 1960s Baris –  Fender Bass VI and Danelectros –  were tuned E to E.

Baritone guitar strings are longer and thicker than usual. The string gauge ranges from .012 to .014 – but can go .016 or heavier if need be.

The thickness depends on the style/genre and the sounds you are after. It’s also common to use regular guitar strings on baritones,  especially a wound 3rd for easy bending.

Here are some recommendations for baritone guitar string sets: The Elixir Nanoweb Baritone String Set is engineered to stand up against corrosion and provide the longest-lasting tone compared to any other guitar string. Rich tone should last as long as the inspiration does. Martin SP Lifespan strings are the next level in-studio performance. Baritone guitars have a heavy, dark sound with piano-like responsiveness due to the lower tuning. They derive their timbre from their extended scale.

The low-end of a baritone electric guitar is beefier than a regular guitar. It is often described as dreamy and twangy, with rich lows and mid-range emphasis. That said, the make/model of the guitar will play a big role in the sounds you get.

Don’t fall for the claims that baritones don’t cut through the mix or lack a feisty top-end. Not true!

A Brief History of Baritone Guitars 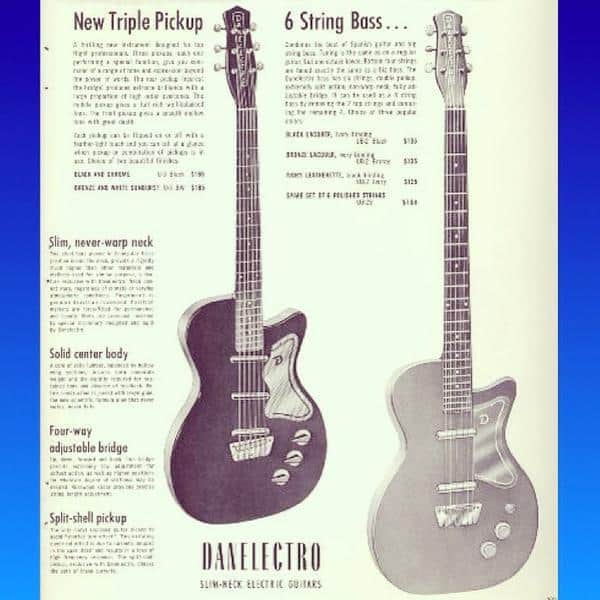 The ancestry of the baritone guitar is somewhat of a mystery to music historians. The best guess is that a basic version of the acoustic baritone guitar emerged in Europe, sometime in the 19th century.  Its design was inspired by the mandocello or viola-de-gamba.

They made their presence felt in the 1950s when Danelectro started making one-of-a-kind guitar-bass hybrids that we now acknowledge as baritone guitars.

Why We Love It:
View Price on Sweetwater

Their wistful tone purfled with bottomless lows made a favorable impact on Western music.

Ask “what’s a baritone” in the 1950s and 60s and there would be a unanimous answer – Twang’s the Thang! Duane Eddy’s baritone guitar-work typified the sound of the instrument.

Playing a Danelectro baritone, Eddy brought the sound to the masses with several hit singles and albums.

‘Caroline, No’ by The Beach Boys and ‘Wichita Lineman’ by Campbell being the most notable of these tracks.

At the time, Danelectro was the only manufacturer in the game. Seeing their rise in popularity, there was a surge in the production of electric baritones in the ‘60s.

Fender was the first on the ball with the Fender Bass VI and other brands followed suit shortly after.

Tic Tac bass refers to a classic Nashville sound that emerged in the 1950s and 60s – the original era of the electric baritone bass.

It refers to the sound achieved by layering the double bass line with a plucky sounding bass or baritone guitar.

Tic-tac lines have a distinctive click and are a Nashville staple, especially in country and surf music. Danelectro and Fender guitars were used in Nashville studios back in the day.

Nowadays, they are still in play, but we have so many more baritone guitars to choose from.

It seemed like electric baritones had hit a low (pun intended) in the 1970s. They retained favor in Nashville, but didn’t catch on beyond down-tuned country and some pockets of rock music.

In what seems like an unlikely resurgence, heavy metal bands were the ones to recognize the prowess of the baritone’s low-end grunt. Baritones started creeping up in the rigs of genre-defining bands like Carcass, Cannibal Corpse, and Bolt Thrower.

Other metal acts started using them with dropped tunings as low as A and G#. Within a few years, baritones were the primary instrument of numerous guitarists in metalcore, sludge, doom, and other heavy metal genres.

To add fuel to fire, Eddie Van Halen kicked off the 90s with his custom double-necked guitar with standard and baritone tuning. He used it most famously in Runaround from the For Unlawful Carnal Knowledge album.

Progressing into the ‘90s, baritones saw steady use in albums by Machine Head, The Cure, Dio, and other renowned artists. Among these, Stephen Carpenter (Deftones), Mike Mushok (Staind), and Devin Townsend played a big role in popularizing the instrument.

In fact, at least half of all “Candy Rat” virtuosos have dabbled with crazy low tunings (G# or F# even) on custom-built baritone acoustics. Even songwriters who picked them up as a one-off thing ended up getting addicted to their richly rewarding sounds.

On the other hand, electric guitar icons like James Hetfield (Metallica), John Petrucci (Dream Theatre), Pat Smear (Foo Fighters), and Brian Welch (Korn) featured the electric baritone in one or more of their tracks and live performances around this time.

In other words, everyone who is anyone has jumped on the bari-bandwagon at some point.

Here is a quick list of some well-known guitarists and songs to explore the sound before you dive into the deep end.

All these guitarists have used baritone guitars at one point or another in their careers:

Here are songs by acclaimed artists that using acoustic or baritone electric guitars.

What To Look For When Buying A Baritone Guitar?

Some baritones are suited to ambient or textural sounds, others are twangy and crunchy, and a few are the meat and potatoes of metal riffage. I can’t think of one single instrument that can fit into all three of those paradigms.

That’s because you’ve got Danelectro baritones with lipstick pickups, ESPs with Black Winters, Gretschs with mini-humbuckers, and let’s not forget the bass contour and treble-bleed knobs on the Reverend baritones.

In other words, it would be disingenuous to create a generic formula that works for everyone when looking to buy a baritone guitar. However, I can offer a few tips that ought to transcend all use cases.

Baritones Have a Slight Adjustment/Learning Curve

It is a tad more difficult to play the baritone guitar than a regular guitar. There is a learning curve for regular guitar players at first.

The fretting hand may face challenges due to the difference in scale length and string gauge. It can be tricky to reach things, especially in the upper frets.

The right hand also needs a few adjustments to adapt to the new instrument. On the whole, it’s something that you can overcome easily. But it’s important to be aware of it.

Baritones are available with anything between a 26.5 to 30-inch scale. As you hit 28+ there will be a significant difference in the playability, string tension, and tone.

In other words, the instrument will feel less familiar compared to a standard guitar. If you want a +1 for your collection, settle for a 26-27-inch scale like the PRS SE277 or Reverend RA Descent.

If you want the real deal, you can reach for a 29-inch scale Gretsch or Danelectro baritone.

Unsurprisingly, the pickups are critical to achieving a well-defined low-frequency tone.

Simply put, an entry-level baritone can be a nightmare if it has poor-quality pickups. Even at standard tuning (B to B), it’s gonna sound muddy and lack clarity.

So, I recommend paying close attention to the electronics. Of course, you can swap out the pickups too, this is requires extra time and money that you may not have.

This tip applies to acoustic baritone guitars only. That’s because acoustic baritones are quieter than their dreadnought or jumbo counterparts. It’s just the nature of low frequency sounds.

Guitar makers use larges bodies, baritone bracing, and other design tweaks to remedy this issue. Ensure that your acoustic-of-choice has the ability to push more air and project well so that you don’t have to work it too much while strumming.

Jumbo tone with deep, moody richness, the BT-240E Baritone offers a gorgeous layering of low-end timbre for a unique and mysterious sound.

Why We Love It:
View Price on Thomann

They are neither bass guitars, nor extended range guitars, nor regular guitars, but baritones can be just as inspiring. From retro Nashville bass tones to drop A caveman riffs, bari “tones” make a compelling sonic case for their inclusion in a well-rounded guitar collection.

If they’ve struck a chord with you, there are a ton of great baritone acoustic and electric guitars from ESP, Reverend, PRS, Ibanez, Alvarez, Walden, and Gretsch among others.

We have covered the best acoustic and electric models for 2021, so check them out next and find the right baritone guitar for you!