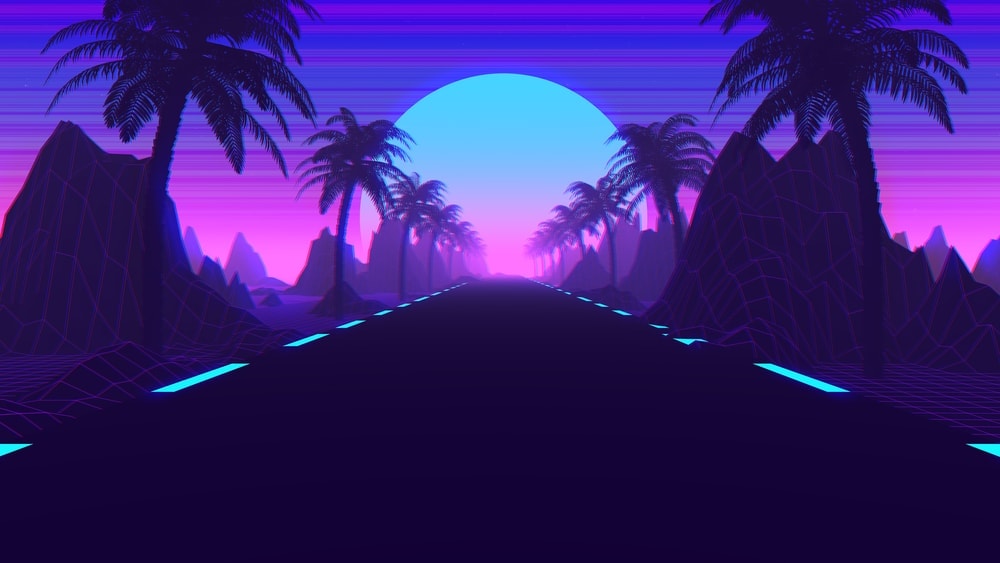 Vaporwave Vs Synthwave (What’s The Difference?)

MGF Audio·
Ask The Hive
Home
Ask The Hive
Disclosure: We may receive commissions when you click our links and make purchases. Read our full affiliate disclosure here.

When it comes to vaporwave vs synthwave, these genres (or “micro genres”) are often mixed up or even considered sub-genres of each other.

Although they started around the same time under similar circumstances, they are separate genres and it’s rare for artists to make music in both styles.

In this article we’ll look at what makes vaporwave and synthwave separate musical genres and also explore what they have in common.

What Are The Differences Between Vaporwave And Synthwave?

Synthwave features instrumentation almost exclusively of 80s synth and drum machine sounds. Vaporwave on the other hand, is more experimental, psychedelic, and closer to ambient or ‘sound art’ music in most cases.

In synthwave, chords, melodies, basslines, and drum parts are written ‘from scratch’ or pulled from a MIDI pack. There is a stronger emphasis on rhythm in synthwave compared to vaporwave, and sampling plays a much less prominent role overall.

Not all vaporwave music is made from samples, but a lot of it is, and more often than not these samples are slowed down (and lower in pitch as a result).

While both genres pull from a similar time period, synthwave is objectively obsessed with the 80s and focuses specifically on sports cars, neon lights, big sunglasses, and very early computer graphics (like Tron).

The vaporwave aesthetic spans a longer period of time, stretching into the 90s and even early 00s depending on who you ask. Vaporwave sometimes features social commentary on globalism, capitalism, and consumerism through sampling as well as album art, track titles, etc.

Stylistically, vaporwave artists and songs frequently use obscure unicode characters like ｗｉｄｅ ｔｅｘｔand incorporate Kanji. Emojis became more popular as they were standardized throughout the 2010s. This is much less common in synthwave music, which is more ‘to the point.’

If you find yourself in a situation where you think you are hearing either synthwave or vaporwave, try this simple test.

If you’re hearing slowed-down loops from the 80s and 90s pop, RnB, or smooth jazz then you’re listening to vaporwave. If you can hear a lot of 80s synthesizers along with a steady, driving rhythm that you can either nod your head to or dance to, chances are it’s synthwave.

As you might have expected, this is a generalization, and plenty of examples fail this test.

For example, the ‘utopian virtual’ style of vaporwave features mostly original compositions made with MIDI and synthesizers (generally 90s ROMplers). As well as this, there are synthwave artists who are much more minimalist with their use of percussion and might even make straight up ‘ambient synthwave.’

The fact that both genres defy easy categorization is a testament to their versatility.

So as you can see there is more to the story here, so let’s look at what makes synthwave synthwave and what makes vaporwave vaporwave.

Synthwave is an electronic music style that is heavily inspired by 1980s synthesizer music. It came to prominence in the early 2010s in online circles, and thus is considered an early example of a music genre that was born on the internet (just like vaporwave).

Instrumentally, it features classic 70s and 80s synth and drum machine sounds and tends to be tonally bright, with punchy drum machines playing steady rock rhythms. The opposite can also be true, but a large amount of synthwave will fit into this criteria. Speaking of Vangelis, Ridley Scott’s 1982 Blade Runner film is an important influence for this style both visually and sonically. GTA Vice City is also considered to have helped stoke the embers of 80s nostalgia just enough to make synthwave an inevitability.

The 2011 film Drive was a critical moment for synthwave as a genre, and featured music by early synthwave pioneer Kavinsky. In recent times, with songs like Blinding Lights by The Weeknd, synthwave’s influence has only become more obvious.

In many ways, synthwave has fused with synth pop to become one of the most dominant music genres in recent memory.

Outside of the pop charts, look no further than Stranger Things – one of the biggest TV series of all time. Though the Stranger Things soundtrack is closer to ambient music than synthwave, the sonic aesthetic is very similar. This is largely down to the choice of instrumentation – Kyle Dixon and Michael Stein choose to work with 70s and 80s keyboards and synths for an authentic sound.

Vaporwave is a music genre and visual aesthetic that appeared in the early 2010s shortly after but still more or less alongside synthwave.

Many vaporwave songs sample loops from 80s and 90s music, often slowed down with effects like reverb and delay. But alongside this are releases like James Ferraro’s Far Side Virtual which consists of original compositions and far less sampling.

It’s a very broad genre with many different styles, but vaporwave music tends towards psychedelia, postmodernism, and the avant-garde. Experimentation is particularly welcome, and many vaporwave songs defy traditional musical conventions.

Vaporwave can be compared to the punk movement in the late 70s as both share a raw DIY aesthetic and a general disregard for conventions. The genres are different musically but have a similar textural quality.

Vaporwave is a somewhat niche genre with few superstars. This is partly because so many vaporwave artists are anonymous, but also because it’s hard to monetize your music if you’re sampling from other artists (even with permission!).

Perhaps the artist with the most number of significant vaporwave releases is Vektroid (aka Macintosh Plus), but it would be unfair to label them purely as a vaporwave artist. The same can be said for Nmesh, Oneohtrix Point Never, James Ferraro, George Clanton, and many others who have released classic vaporwave albums despite mostly operating outside of the genre.

If you want to check out the classic albums, you should of course listen to Floral Shoppe by Macintosh Plus which steadily rose in popularity throughout the decade to meme-status by 2015. This is fitting for an album that sounds jarring and hostile at first, but later proves to be very lush and beautiful in its own weird way.

I would also reccommend Dream Sequins by Nmesh, it’s an incredibly inspired album with amazing use of samples.

If you want to check out some of the best ‘sample-free’ vaporwave out there, Eyeliner’s 2020 album Drop Shadow is up there.

What Do Vaporwave And Synthwave Have In Common?

Both genres share a love for 80s aesthetics, both visually and musically and you will hear many similar synth and drum sounds in both genres.

Subtractive synth sounds as well as all manner of drum machines will show up in both vaporwave and synthwave.

In terms of vaporwave and synthwave as genres or ‘micro genres’, they both sprung up around the same time and for similar reasons.

Vaporwave and synthwave celebrate – and sometimes critique – this bygone era in our collective memory. Though there is some overlap in aesthetics – like the love of palm trees, neon lights, and the 1980s in general, there are more differences than similarities at the end of the day.

What is the BPM of Synthwave?

There isn’t a set BPM for the synthwave genre, however it is widely accepted that the tempo generally lies between 80 and 118 BPM.

What Synths Are Used In Synthwave?

In synthwave you’ll hear a lot of subtractive synthesis, which was the most common form of synthesis in the early-mid 80s (arguably the time period that synthwave most aspires to sound like).

Subtractive synthesis involves using basic oscillator shapes like square, saw, and pulse waves combined with filters that sculpt and shape the sound. Of course there is also modulation with LFOs and envelopes.

Classic synths like Roland’s Juno 106 and Sequential’s Prophet 5 may not have many controls compared to modern softsynths like Vital, but they can still make a wide array of sounds.

Most synthwave musicians will use plugin emulations of these synths rather than the real thing, simply because of cost and convenience.

You might also hear FM synthesis because the Yamaha DX7 was huge in the 1980s. Some basic sample-based synthesis and wavetable synthesis is also acceptable as long as it’s not too high-tech.

For this reason, I do want to mention our own Analog Wavetables and Vintage Synth Wavetables that you can use in Serum, Vital, Pigments, Ableton Wavetable, and many other synths. These wavetables are made from real recordings of analog synths and are a great way of getting classic sounding filter sweeps and PWM sounds in a modern DAW. Recreate the sounds of yesteryear and synthesize the future with our collection of 130 vintage synth wavetables, sampled directly from dozens of studio classics!

Who Are The Top Synthwave Artists?

In terms of pure popularity and influence, Kavinsky, Perturbator, and The Midnight are frequently cited.

Some artists like HOME and Chromatics have synthwave elements, particularly the instrumentation, but are not considered representative of the genre as a whole.

What BPM Is Synthwave?

Synthwave typically sits between 80-130 BPM. That’s a pretty big range compared to a genre like house music. What’s more is there are plenty of examples that sit outside of this range, which is really just a blurry average at best as there are different styles of synthwave that sit at different tempos.

Generally, artists will tend towards one or the other, but it’s fair to say any synthwave album will contain a mix of tempos.

Personally, I think 84 BPM is a good ‘default’ tempo for slower synthwave tracks, and for upbeat tracks with a sense of urgency you can try 130 BPM. If you really want to “push it to the limit,” you can try 156 BPM, which is about the same tempo as the infamous song from Scarface.

What BPM Is Vaporwave?

Vaporwave tends to be relatively downtempo, and this is especially true for songs made from samples that have been slowed down. So think anywhere from 60 BPM up to 100 BPM.

However, I think vaporwave is even harder to pin down in this area than synthwave. Once again, there is plenty of music that falls outside of this range or cannot even be measured in beats per minute.

A lot of vaporwave is not even ‘on the grid’ especially if it’s done live or in a basic audio editing program like Audacity.

Where Can I Get Synthwave Serum Presets?

Right here! We have a pack on our store with over 70 patches, almost all of them featuring our own wavetables sampled from analog synths.

You can also cop our free Synthwave Wavetable pack!