Odd vs Even Harmonic Distortion (What’s The Difference?)

First: A Quick Lesson On Harmonics And Overtones

To even begin discussing the differences between odd vs even distortion, we need to run through a quick lesson on odd vs even harmonics, and what overtones are.

I’ll try my best to keep this as simple as possible!

Odd vs Even Harmonics: What’s The Difference? 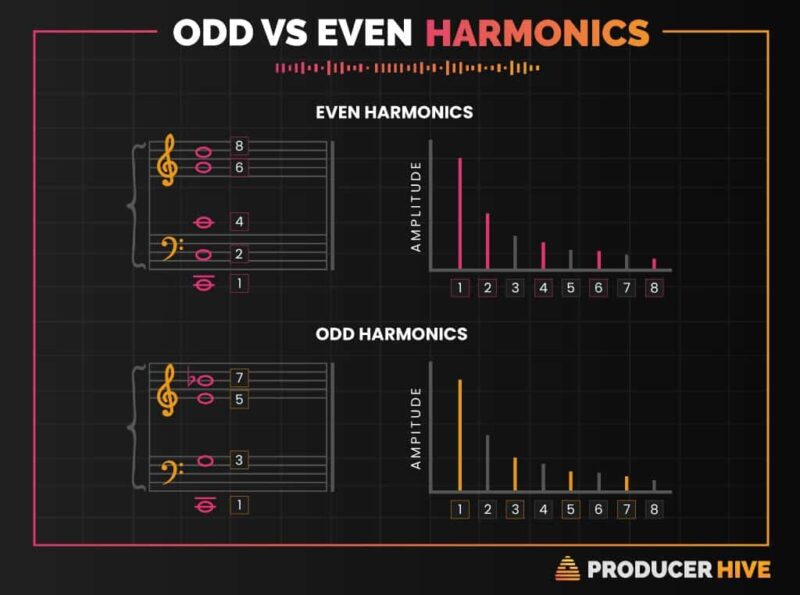 What About Harmonics vs Overtones?

These are often confused with each other. Not all overtones fall into the harmonic series, but all harmonics are considered overtones.

Overtones Expressed In The Harmonic Series

When examining overtones in the harmonic series, we notice the following:

The harmonics generated will depend on the note or chord being played, and each frequency will produce different harmonics. The harmonics heard are based on the fundamental frequency being played and produce a lower amplitude (or volume) as they increase from 1st to 8th harmonic.

As with a lot of aspects of audio production, odd and even harmonics can be calculated with some simple math.

Think of these harmonics (or ‘overtones’) as frequencies that add character and define the timbre of the sound.

The addition of harmonics makes for a much more interesting sound (which is why the sound of distortion is actually pleasant to listen to).

Now with that out of the way, let’s discuss odd vs even harmonic distortion.

Odd vs Even Harmonic Distortion

We’ve talked recently about tube vs solid-state pre-amps, their characteristics and the harmonics they create.

The sound of harmonic distortion in your mixes can greatly affect the timbre and feel, so it’s worthwhile getting to grips with identifying them and how they will impact your workflow (as well as knowing how they behave in order to tame any trouble frequencies).

What is Harmonic Distortion?

A good way to picture what harmonic distortion looks like is first to imagine a sine wave. A sine wave will oscillate with a consistent amplitude and frequency (think of hitting a key on a synthesizer without any effects or processing on it). They are clear, constant notes which in musical terms are pretty boring to listen to.

By adding distortion to a sine wave we are actually manipulating the wave itself so that it no longer follows a strict oscillation.

This is why when you see a waveform in your DAW it looks like a ‘scribble’, because (unless you are recording a sine) the wave won’t follow a set path as it oscillates.

When we add distortion to a sine wave (or cause it to overdrive) a clipping effect is created. The more distortion we add (or the more saturated the sound becomes) the more harmonics are produced.

If you insert a frequency analyzer plugin onto an instrument track this will give you a good idea as to what the fundamental frequency is.

If you’ve ever seen a vibrating guitar string under a powerful light you’ll notice it doesn’t vibrate equally, the patterns on the string will change as the string rings out.

Analog Recording Signal Flow (Diagrams + How Does It Work?)

While this doesn’t represent harmonic distortion, it does make it easier to understand that there isn’t just one frequency playing, rather there are several (as illustrated by the different vibrations and patterns in the string).

Think of harmonics as ‘other frequencies’ that surround the fundamental frequency.

Let’s say we are cranking our tube amplifier on a high gain channel. Tube distortion is synonymous with warmth and clarity. This is because the tubes create even harmonics which sound subtler and rounder.

Conversely, if we then turn on our solid-state amp and do the same, the distortion will produce odd harmonics which are often described as grittier and more aggressive in tone.

You’ll often hear guitarists claim that tube amps are far superior to solid-state, though to be frank, beauty is in the ear of the beholder. There is no right or wrong answer here. I recommend checking out our article on tube vs solid state preamps for more info on that debate.

Is One Better Than The Other?

Audio production is never straightforward, there, unfortunately, is no ‘better or worse’ when it comes to harmonic distortion!

As always, experiment with each and learn what each can offer to improve your mixes and achieve the sound in your head.

Become A Master Of Overdrive

Check out this brand new course from Noiselab!