How Does Spring Reverb Work? (An Illustrated Guide)

What is that dark, almost alien reverb sound that was particularly popular in the 50s and 60s? You’re probably thinking of spring reverb! While many reverb devices today are incredibly realistic, there’s something charming about the simplicity of a spring reverb unit. Today, they exist as both physical hardware units and as digital plugin emulations.

Spring reverb devices operate on a combination of psychoacoustics, natural reverberation, and electricity. We’ll start by examining how spring reverb units work, beginning with some historical context for this famous effect.

Unfortunately, the design came up short, with lower frequencies being more likely to be able to travel the full length of the spring and move the coils. This resulted in a metallic and dark sound that’s been famously employed by engineers in rock, pop, and especially dub music.

Many digital reverb units will have a spring reverb preset that emulates the sound, giving the bouncy and low-end focused reverb, adding an unrealistic alien feel to music.

Despite not sounding like a natural reverb on its own, it’s not impossible to get more realistic sounds with spring reverb units.

Laurens Hammond first applied for the patent in 1939 after repurposing a Bell Labs phone call simulation device to make the first mechanical spring reverb unit. He would go on to sell church organs with his artificial reverb built in. He would sell these to congregations that used spaces that were acoustically damped and deadened, so the music would be reverberant, but not the sermons.

Before hardware units, reverb was achieved through the use of natural reverb.

Engineers would mic up specially made echo chambers and concert halls. Eventually, engineers wanted hardware that would give them intricate control over the various factors in reverb, as well as a unit that would be portable, smaller, and cheaper than the giant echo chambers.

Thus, began the pursuit to build a compact reverb unit.

This unit operated on electromechanical principles, like the spring reverb, using a metal sheet instead of a spring. It was cheaper and more versatile than echo chambers.

Another result of the race to build a compact reverb unit was the Hammond Type 4 Spring Reverb. This particular one was popular with Fender, being incorporated into the 1962 Twin Reverb amp and 1963 Fender Vibroverb amp designs.

The spring reverb unit is an electromechanical type reverb. The whole unit is referred to as a reverb tank. The different parts include:

An outer steel chassis forms the outer channel that is connected to an inner aluminium channel, which the parts are mounted on.

The transmission spring is the titular “spring” that generates the effect. It has magnetic poles on each end called transducer magnets.

The input transducer is a coil of wire wrapped around a magnetic core. The transducer has an opening (air gap) where the main end of the transmission spring is placed, without physically touching it.

Operating on Faraday’s Law of electromagnetic induction, a current is run through the coil, which causes changes in the magnetic field of the transducer’s core, exerting force on the magnetic pole end of the transmission spring. Thus, the electronic energy gets converted to magnetic energy.

The transmission spring’s inertia, electrical resistance, and inductance will all affect the unit’s transient and frequency response.

This magnetic force causes the transmission spring to move in a twisting circular manner, converting the magnetic energy to mechanical energy. This makes the spring vibrate according to the audio input of the reverb unit, which is then reflected back and forth between the two ends of the spring reverb.

Damper disks are applied to the spring, affecting the unit’s decay time and modulation. The user controls the pressure of the damper disk on the spring. Initial versions of spring reverb units used oil that would fill up the tubes that encased the springs, with the amount of oil controlling the decay.

Some units also have a feedback control to alter how much of the output signal is routed back to the input signal.

The input transducer’s coil has an impedance that determines the input voltage needed for a full drive of the unit. This impedance will vary from unit to unit.

Since the input transducer’s coil is an inductor, the frequency varies linearly with impedance, meaning to get twice the frequency at the same drive current requires twice the voltage and power.

Audio at constant voltage at all frequencies yields a lower current of high frequencies as it travels through the transmission springs (as higher frequencies behave differently in solid matter).

Due to this inherent characteristic, there are usually capacitors that create a low cut filter as part of the input transducer.

It’s important when replacing the transducer to use one that has matching impedance in order for the reverb unit to have the best audio quality. A low input impedance on the reverb means the unit will need lots of current for max output.

To fully appreciate the mechanical ingenuity of spring reverb, it’s important to brush up a bit on how sound actually works. Particularly in terms of how sound is affected as it travels through various mediums and their states (solid, liquid, gas).

Sound is a form of energy that travels outward from a sound source. As it travels, it causes variations in the medium it’s travelling through.

It’s important to note that the medium’s particles do NOT travel with the sound energy but rather vibrate as the sound travels through it.

The vibrating particles also pass sound energy along as they collide with other particles. As this occurs, the sound energy dissipates, gradually fading in volume until it loses all its energy.

This contrasts with the properties of a transverse wave, where the direction of an energy wave is perpendicular to the vibration of the medium’s particles.

Light waves are transverse and sound waves are longitudinal. When describing audio reflections in a reverberant space, it is not the same as describing light reflections.

A Matter of the State

You probably already know that the character of a sound wave will change depending on the medium it travels through. But the actual state of that medium is important as well.

When moving through gases, sound energy at all frequencies will travel at the same speed. Gas particles are farther apart than those in liquids and solids, so there isn’t a lot of resistance to the particles vibrating.

This means that in a gas:

In solids, particles are even closer together than liquid particles, being chemically bonded to each other. Meaning:

The different behaviours of sound in each state of matter are taken advantage of when making spring reverbs as we will see later.

Sound travels through our outer ear, into our ear canal and then hits our eardrum.

What Is The Haas Effect In Audio Production? (+Tips & Tricks)

Eardrum movement causes the three ear bones (incus, malleus, and stapes) to vibrate. These three bones push against the cochlea in the inner ear, displacing the basilar membrane.

Its structure enables different frequencies of sound to determine which part of the basilar membrane vibrates, where tiny hair-like strands convert mechanical energy into neural energy which gets sent to the brain, where the information is interpreted as sound.

Humans are binaural. This means that most of us have two ears. You probably have never given it much thought, but the distance between our ears is actually very important for how we perceive sound.

Our brain takes advantage of this distance to figure out where a sound source is coming from. This is called localization.

The precedence effect (aka law of the first wavefront), or Haas effect, describes the phenomenon of sound source localization.

When two sounds of similar level and waveform, occur one after the other, if the second occurrence is within approximately 40 ms of the first, both sounds are perceived as one, and the spatial location is determined by the first sound, regardless of the second sound’s actual location.

So all of the previously discussed items apply to reverb. Reverberation is created when sound is reflected off the numerous surfaces of a space, decaying in energy as the sound gets absorbed by said surfaces.

The material of the surfaces determines how much of the signal gets absorbed. The characteristic reverb of a space gives the listener cues on the distance and location of the sound source.

The basic parts of reverberation are the direct sound, pre-delay, early reflections, and decay. The direct sound is the sound wave that travels directly from said source to the listener’s ears. It’s the first sound we hear.

The pre-delay is the time between us hearing the direct sound and the first reflection. It gives cues about the space the listener is in. Larger spaces have longer pre-delay times. 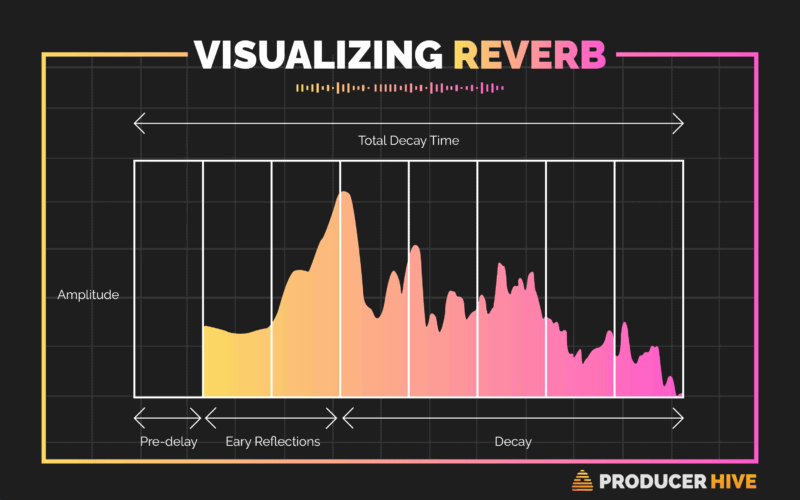 The early reflections are sound waves from the direct sound that have only been reflected once or twice before reaching the listener.

Thus, they haven’t had enough time to get distorted by the environment. A larger distance between the listener and the sound source will yield lower levels of early reflections.

Once enough time passes, and the sound is reflected off multiple surfaces, the reflections are referred to as late reflections.

The decay is the time it takes for the sound pressure level of the reflections to decrease by 60 dB SPL after the direct sound stops. Other names for it include decay time, reverb tail, and decay tail, among others.

Each successive reflection, after the direct sound, has a lower level incoming sound wave and less high-frequency content. Higher frequencies mean the particles of the medium vibrate faster, meaning more energy is required to sustain the sound.

Spring reverb is a “basic” reverberation effect that has a dark, spooky timbre. While it’s not as versatile as other reverb effects, or as realistic as ultra-modern convolution algorithms, it’s still a classic sound that is hard to imitate.

While most engineers and producers encounter spring reverb in its digital emulation form, whether through a plugin or digital reverb unit, the idea is the same.

It doesn’t take very long to get a handle on spring reverb. If you need some no-fuss ambience that obscures sound in just the right way, spring reverb is a perfect candidate. Next time you instinctively reach for an elaborately modelled reverb plugin, or even your DAW’s stock reverb effect, have a think about using spring reverb instead. Quite often, its elegant simplicity is more than enough.

(For a deep-dive into the world of reverb, make sure you read Reverb Cheat Sheet (A Complete How-To Guide))