Sean Fitzjohn
Guitar TechAsk The Hive
Disclosure: We may receive commissions when you click our links and make purchases. Read our full affiliate disclosure here. 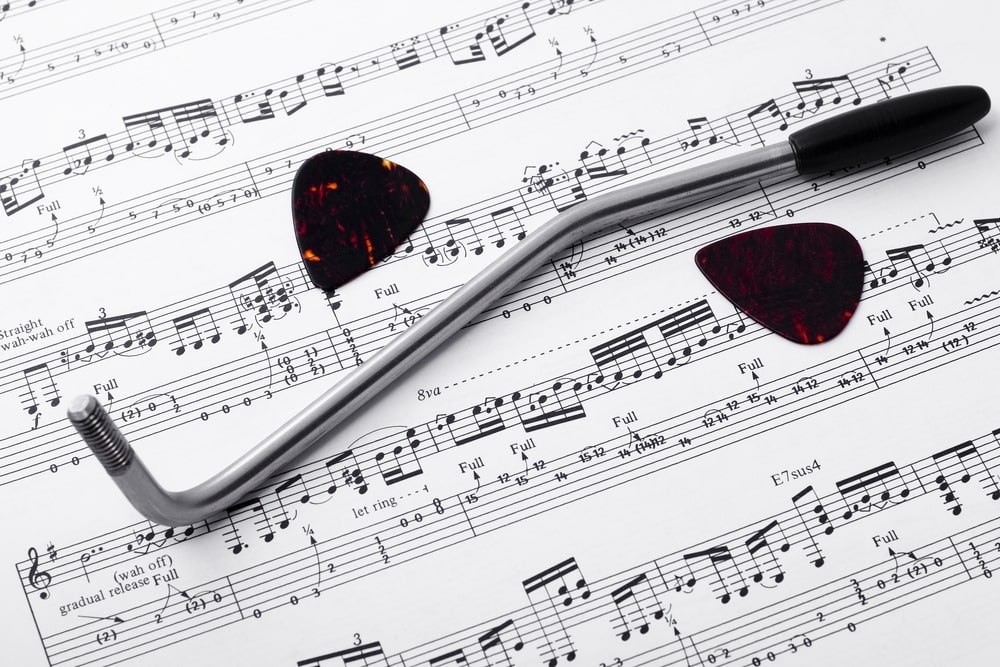 Nothing adds life to a guitar quite like tremolo (or rather vibrato, but we’ll get to that).

The odds are pretty good that plenty of your favorite classic rock songs have the tremolo bridge sound in them, that “whoa whoa whoa whoa” sound of a guitar screeching and screaming from some dives on the whammy bar. Or maybe it’s just the slight wobble on sustained notes from some subtle play on the tremolo bar.

While not every guitar on the market comes equipped with a tremolo arm, there are many guitar models where the inclusion of a tremolo system is a significant part of that instrument’s identity, such as the Fender Stratocaster. You can also add a tremolo system into your existing guitar, but depending on the tremolo system you want to install it can quickly become a costly and difficult task, usually resulting in some heavy modifications of the body of the guitar.

There are two main tremolo system designs: floating or non-floating. Both types have their benefits and uses, but if you are looking to do more extreme Eddie Van Halen style dive-bombs, you probably want a floating bridge. A non-floating will provide you with greater sustain, and better tuning stability.

Floating Vs Decked vs Blocked Tremolo

Let’s take a look at some of the differences between these tremolo systems and which one might work best for you.

Tremolo 101 – Everything You Need to Know

If you ever come across one of those “guitar nerds” that keeps calling your tremolo a vibrato, just know that they are technically correct, even if they come across as a little bit pretentious.

The way a tremolo (the effect, not a tremolo arm) works is a pretty ingenious piece of technology that has been around since the 60s. Tremolo effects were often included in guitar amps themselves, like in classic Fender amps like the Twin Reverb (they confusingly called it a vibrato effect), but they are now most commonly effects pedals.

Basically, a tremolo effect works to modulate the amount of voltage coming into your guitar amp via the circuitry, emulating the musical technique of tremolo.

For example, some tremolos use a VCA (Voltage Control Amplifier) to adjust overall signal amplitude, pumping out a very specific waveform (such as a sine wave, square wave, or other shapes) that is then combined with the dry guitar signal and creates the intended tremolo effect.

A tremolo bridge system, on the other hand, is a mechanical effect that is incorporated to your electric (or, if your Gretsch, acoustic?) guitar’s bridge. Essentially, the bridge is attached to springs that allow it to move back and forth by manipulating an attached arm (the whammy bar!) that modulates the pitch of your guitar’s strings by stretching them. Because of the spring-loaded action of the bridge, when you release the pressure on the bridge/springs, the guitar returns to it’s initial pitch and tuning (in theory). Floating tremolos and floating bridges are generally the more popular system, both floating and non-floating designs have been a part of guitars since the 1930s. The very first tremolo system introduced was the Kaufmann Vibrola, first introduced in the 1930s.

The very first floating tremolo was launched by Bigsby in the 1940s, originally designed for country artist Merle Travis. But it wasn’t until Fender released the legendary Stratocaster in 1954 that the idea of a floating tremolo really took off, with the strat’s floating “synchronised” tremolo equipped bridge bringing this type of guitar to the masses.

Later, in the 1970s and 80s, companies such as Floyd Rose developed even more sophisticated floating tremolo options that expanded upon the basic design of the strat tremolo. These tremolo arms were designed to allow better tuning stability and more extreme use of the bar, and became particularly popular with “hair” bands that dominated music at the time. Eddie Van Halen, Joe Satriani, and Steve Vai all used floating tremolo equipped guitars and their use in their own music was a major part of their signature sound.

While plenty of guitarists still use tremolo systems on their guitars today, much of the technology involved in electric guitar tremolo systems have not changed much since the 1980s, with the majority of upgrades having to do less with the actual system itself and more with refining the various parts involved to make most styles of vibrato arms better. On most modern guitars, you can fairly easily get your guitar to stay in tune with any kind of vibrato system, and some vintage designs are seeing a new heyday with modern upgrades.

There is some confusion and multiple meanings behind what a non-floating vibrato is on an electric guitar. Some like to define this type of vibrato as a system where the bridge sits flat against the guitar body when the vibrato arm is not in use. This means that you can only lower the pitch with the bar. In theory, you can set up any type of tremolo in this way, so there is not really a specific “type” of system that is exclusively a non-floating vibrato.

However, the most common guitars that can use a non-floating vibrato are strat style guitars where the player does not rely on the vibrato arm all that much. This can provide better tuning stability than a floating system because the strings are fully “at rest” when the vibrato arm is not engaged, and can also help to add more sustain to your guitar tone as the strings will resonate through the body better.

Others like to define a non-floating vibrato as a vibrato where the bridge does not move when you engage the bar. By this definition, many tremolo systems such as the Bigsby and Fender Jazzmaster are non-floating vibratos, while Strat-style and Floyd Rose are floating. I personally think this definition is more useful when discussing tremolo systems.

Floating vibrato systems are generally described as any tremolo system where you can both adjust the guitar’s pitch up or down with the bar. In these setups, the guitar’s bridge is actually suspended, or “floating” in the guitar’s body when the bar is not being used. Strat trems can be setup to be floating, but the gold standard of floating vibrato systems is the Floyd Rose. These sophisticated tremolos feature the most components, and allow the player to do all sorts of crazy pitch bends up or down, generally with rock solid tuning stability. Considered one of the most impactful innovations in the history of the electric guitar, the Floyd Rose double-locking design has kept generations of shredders in tune while they whammy, warble, dive-bomb, and squeal.

Regardless of the type of system you choose, it is important to set up your guitar properly to achieve the best results, and adapt them as needed to fit your playing. Understanding how to adjust your springs, spring tension, and tuning with your tremolo equipped guitar will make a big difference in your end result.

With a non-floating vibrato setup, you generally are not able to manipulate the pitch as much as you can with a floating vibrato. While this may seem like a disadvantage, what you lose in pitch manipulation you gain back in overall tuning stability, even if you chose not to use locking tuners or a locking nut. Non-floating tremolos are generally more “vintage” styled than floating setups, and can be great for adding a little bit of flavor to your playing.

Is Bass Easier Than Guitar? (From Someone Who Plays Both)

Non-floating systems are gaining some popularity in indie and alternative music genres that take influence from the surf and psychedelic music of the 60s and 70s. Fender Jazzmasters are probably the most common guitars available with a “non-floating” tremolo.

Bigsby tremolo setups are also a great non-floating option for many players because you can frequently install them without modifying your instrument in any way. On guitars with Tune-o-matic style bridges, you can purchase a Bigsby that will simply attach to the same posts that the tune-o-matic would have attached, with the tailpiece attaching to the guitar’s button strap on the bottom of the guitar. This is a great option for players looking to add a vibrato to a guitar they already own without risking drilling a hole in the wrong spot or for those afraid of doing an invasive modification on a prized instrument. When you're looking for that smooth dipped-chord or note sound, look no further than the Bigsby B5 vibrato.

While in general, having more wiggle room (literally) in your tremolo system is going to mean less tuning stability, the vast majority of modern setups have taken steps to improve the tuning stability of your guitar, with Floyd Rose tremolos making it virtually impossible to knock your guitar out of tune, even with aggressive dive-bombing.

One of the most important things to consider to improve tuning stability with any tremolo system is the inclusion of a locking nut. Placed at the headstock of the guitar, a locking nut will ensure that your strings do not slide across the nut when you use the bar, which is part of what causes the strings to go out of tune. Floyd Rose tremolos have a similar locking system at the bridge as well, which is what helps give them their rock-solid tuning stability.

Do Strats Have Floating Bridges?

The Fender Stratocaster is one of the most legendary electric guitars in the world, finding use in all genres of music, but most commonly rock ‘n’ roll. It became wildly popular in large part because of its use of a floating bridge and floating tremolo system, which had never been seen on an instrument before.

While the overall design of a strat tremolo is conducive to setting it up in a floating manner, you can adjust the bridge and springs on a strat so that it is resting flat against the guitar body when not in use, effectively making the tremolo a non-floating system. The great part of the strat’s trem is that you can really set it up to work as either a non-floating or floating system. Depending on the other hardware on the guitar, you can optimize the setup to your own playing and preferences quite easily.

(Strat players should check out our guide to the best replacement single-coil pickups for the Stratocaster!)