Chorus vs Flanger vs Phaser: Breaking It Down

Vinny Kaul
Ask The Hive
Disclosure: We may receive commissions when you click our links and make purchases. Read our full affiliate disclosure here. 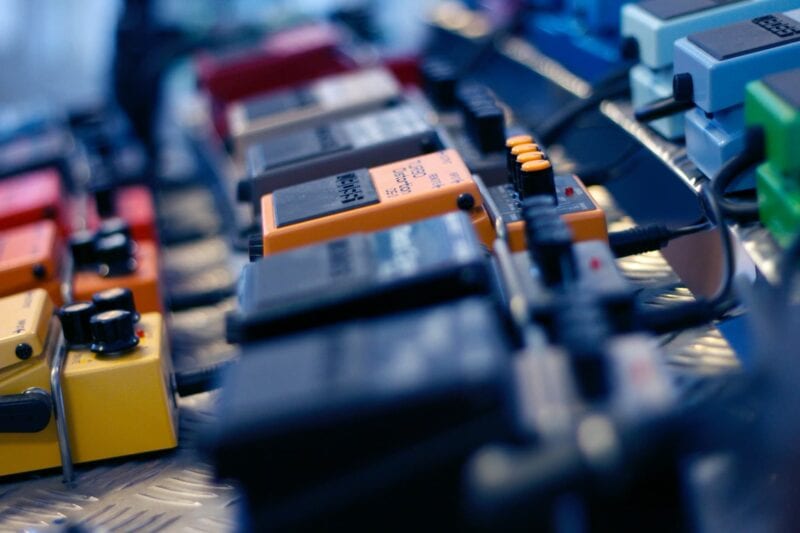 Chorus, flanger, and phaser are three effects that are essential to any guitar pedalboard. They have been widely used for decades on countless hits by bands like Van Halen, The Beatles, Nirvana, and others.

You’ve no doubt heard one or more of these sounds in use in guitar rigs or mixes. But like a lot of other budding audio enthusiasts, you might be confused about how exactly they work, and how they differ from each other.

Phaser vs Flanger vs Chorus: Differences

The primary difference between chorus and flanger is in the delay time. Flangers use shorter delay times than a chorus.

Phasers, on the other hand, do not utilize delays. Instead, the signal is fed through all-pass filters to create the effect.

All three sounds are essentially forms of phase modulation, achieved through different processes or with different parameters. It might be useful to tabulate their comparison for easy recall of the subtle differences as well as similarities.

As you can see, the three effects are principally quite similar to one another, with a few characteristic traits that give each one their unique sound. In this article, I’ll explore the differences in more depth, however, before we do that — we must first dig into the building block that is common to all of them: modulation.

Feel free to also check out our guide on Boost vs Overdrive vs Distortion vs Fuzz.

Everything we hear is made up of waves – or fluctuations in air pressure. How we perceive a particular sound at any level is decided by a combination of parameters of these waves such as amplitude, pitch, phase relation, etc.

The process of varying one or more of these parameters to produce a change is called modulation. It’s achieved by using a source signal or ‘modulator’ to control and vary the parameter of the input audio signal called the ‘carrier’.

The modulator itself does not produce any sound but changes the sound of the carrier signal by affecting the values of its parameters like amplitude (amplitude modulation or AM) or frequency (frequency modulation or FM), etc.

In music production and synthesis, modulation is most commonly achieved with the use of an LFO or Low Frequency Oscillator. As the name suggests, an LFO is a sound wave with a low frequency of oscillation, typically below 20 Hz and thus inaudible to the human ear.

It modulates one or more parameters of the main oscillator i.e. the volume of our input audio signal. In a typical LFO modulator, we can set different parameters to get our desired sound.

1. Shape: The waveform to be used, such as sine, square, or triangle.

2. Amplitude: The level or amount of modulation.

3. Rate: The speed of the modulation.

4. Target or destination: What is being modulated by the LFO, such as filter cutoff or oscillator pitch.

An LFO modulating different parameters yields different effects on the audio to be processed. Modulating the amplitude creates tremolo, modulating the pitch creates vibrato, and effects like chorus, flanger, and phaser are created by phase modulation.

But while the amplitude and frequency of a wave are pretty self-explanatory concepts, what exactly is ‘phase’?

As we’ve established before, all sound is comprised of waves. A quick look at one single sine wave shows us that it consists of periodic high points (crests) and low points (troughs).

Now consider several such waves being generated simultaneously from a source, as is the case with real-world instruments and voices. At a given time, not all these waves might have their crests and troughs at the same point.

When such waves interact, the result is dependent on the difference in the relative positions of these crests and troughs. This is called wave interference.

If the crests and troughs of two waves line up exactly, they will add up and be louder as a result. This is called constructive interference as the two waves are said to be in phase.

Conversely, if the crests of one wave coincide with the troughs of another and vice versa, the two waves will cancel out as a result. This is called destructive interference and the two waves are said to be out of phase.

The term ‘phase’ or more aptly ‘phase difference’ is therefore a measure of the difference between the points of highest and lowest amplitudes of two waves at a given point in time. It is measured in degrees, with 0° meaning completely in phase and 180° meaning “completely opposite” or out of phase.

Varying phase differences will cause waves to interact in changing manners and hence produce different sounds. Therefore modulating this phase difference can give rise to interesting effects, which is how we get chorus, flanger, and phaser effects.

Now that we’ve familiarized ourselves with the basics of phase, we can take a look at how each of these effects works, and compare their properties.

‘Chorusing’ is the sound we perceive when multiple voices (or instruments) play the same note but vary very slightly in pitch and timing from each other. Just think of how a real choir or string ensemble works.

This effect creates a rich, shimmering quality that sounds ‘larger’ than it would with a single voice. Chorus is usually described as sounding lush and natural but can be pushed to the extreme for “alien” like effects.

How Do Chorus Pedals Work?

To emulate chorusing electronically or digitally, a guitar or bass chorus pedal will mix an audio signal with delayed and pitch modulated copies of it. The delay causes a difference in the phase of the two signals, the original and the copy.

Furthermore, the amount of delay time is modulated with an LFO as we’ve learned before. The longer delay time in a chorus causes gradual changes in the frequency (wavelength) of the resulting signal, which will have the effect of varying the copy’s pitch. This delayed, modulated copy is then mixed with the original signal.

The delay time used in chorus units is relatively longer, in the range of 20 ms and more, yielding a gentler tone than phasers or flangers. In stereo choruses, this is further enhanced by offsetting the phases of the LFO for the left and right channels, creating a wide, ambient, ‘dreamy’ tone.

A classic example can be heard on the guitar riff in Nirvana’s ‘Come As You Are’. Notice how it gives the guitar a wider, shimmery feel.

Flanging is a popular effect that is perceived as a ‘whooshing’ or ‘jet plane’-like sweeping effect across the high frequencies that has a somewhat harsh metallic quality to it. It is quite similar to the chorus effect in principle, but it is more exaggerated and pronounced.

The LFO on a flanger is almost always a steady triangle or sine wave, but with chorus effects, randomization and noise are often employed for less predictable modulation.

How Do Flanger Pedals Work?

Similar to choruses again, the delay time of the copy is modulated by an LFO. However, the delay time range in flangers is much shorter than in choruses (below 10 ms). Therefore, the copy does not undergo noticeable pitch-shifting as it does in choruses. What’s really important here is the interference between the original and delayed copy.

The result of this interference (flange) is called a “comb filter” due to its distinctive shape on the frequency spectrum.

Since the result is formed by frequency relations within the original signal itself, these notches occur at intervals in harmonic series.

The characteristic sweeping resonance of flanging is obtained when the LFO modulates the delay time, thereby moving this pattern of notches and peaks up and down across the frequency spectrum periodically.

Flangers also use ‘feedback’, where the processed signal is fed back into the system for even more modulation. This is used to further accentuate the effect of the comb filtering, giving flanging its signature harsh, metallic tone.

Heart’s rock classic ‘Barracuda’ begins with the guitar riff where you can clearly hear a flanger effect sweeping up and down.

What Genre Is Frank Sinatra’s Music? (It’s Not Just Jazz)

Phasers have a similar sonic effect, arguably somewhere between a chorus and a flanger in intensity, but the method by which phasing is produced differs from chorus and flangers in one key aspect: there is no delay involved.

Similar to a flanger, phasers create frequency cancellations in the original signal, which are then swept up and down by an LFO. However, instead of combining a delayed copy of the signal to the original, phasers utilize components called ‘all-pass filters’.

A phaser will run the input signal through a series of such all-pass filters which affect the phase relationships at various frequencies. When the outputs of these are combined with the original signal, notches are formed at the frequencies where the all-pass circuits caused them to go out of phase with the original. Similar to flangers, a feedback loop can be added to enhance the effect.

The number of notches in a phaser’s output is half the number of all-pass filters (called stages). The position of these notches can then be modulated by using an LFO similar to a flanger.

As you can see, there are typically fewer notches in a phaser’s output than a flanger’s, thereby producing a less drastic frequency cancellation effect.

Also, since the phase differences are derived from discrete all-pass circuits and not from the signal itself (as in the case of flangers), the intervals between the notches do not have any harmonic relation.

These three effects have been widely popular since the 1960s and 70s. They have been integrated into various hardware forms like guitar pedals and rack effect units, as well as software emulations in the modern era in the form of plugins. Stereo implementations of all these effects serve to further enhance their spatial effect for creating interesting ambiances.

As we have seen, all three effects use LFOs to control the modulation of their parameters. The rate and depth of these LFOs can be switched to control the speed and intensity of the effect. The waveform of the LFO also changes the way the modulation is applied e.g. sine wave enables smooth transitions while a square wave would cause abrupt changes.

Though they are almost identical on this front, the sound of each effect is vastly different and useful for different things. You as a musician, producer, or audio enthusiast should know to make the best decision for the task at hand.

I hope that through this article, I have been able to describe the specifics of each effect and clear any confusion you might have had. Further, I encourage you to go ahead and experiment with these effects, whether in hardware or software form, so you can hear the nuances for yourself and find what suits your sound.

(Do you want to go even further with modulation effects? Check out 5 Creative Sound Design Tips To Make You Rethink Effects)