Jasmine Mills
Ask The Hive
Disclosure: We may receive commissions when you click our links and make purchases. Read our full affiliate disclosure here.

Getting your head around all this mumbo jumbo can be confusing with all the different specifics of the setup.

This article will take a deep dive into bi-amping: the science behind it, different types of bi-amping setups, and the pros and cons of this approach. By the end of this article, you will have a solid grasp of the practice of bi-amping.

How A Bi-Amping Setup Works

Why Does Bi-amping Exist?

Someone eventually took both of those elements and hooked up the tube amps to drive the tweeters and the solid-state amps to drive the woofers. This is an early example of bi-amping, but not the only approach you can take by any means.

Is Bi-wiring The Same Thing As Bi-amping?

No. Bi-wiring is not the same as bi-amping.

In conventional wiring from one amp to one speaker, the amp’s set of terminals are connected to the speaker’s respective set of terminals. If more speakers are added, each speaker would get the same wiring configuration from its own amp. If the speaker has 2 pairs of terminals, a jumper strap is used to connect them, so the HF input and LF input on the speakers both receive the same full audio signal.

In bi-wiring, an extra set of cables are used for the amp’s high frequency and low frequency signal outputs. The amp’s output pair of terminals are connected separately to both the HF terminal pair and the LF terminal pair on the speaker.

These terms designate if the built-in passive crossover in the speaker is used or if an active crossover is used before the audio goes into the 2 amps. In other words, the type of crossover used determines the difference between passive and active bi-amping.

The speaker’s internal crossover network is bypassed when setup for active bi-amping.

One thing you’ll notice upon reading is that, in these two bi-amping setups, the type of crossover used determines where it goes in the signal flow. Crossovers are used to filter and separate audio into its high frequency and low-frequency content.

Passive crossovers filter the audio after its level has been raised in the amp to speaker level. These crossovers are usually designed for a specific crossover frequency. They don’t require external power and they attenuate audio signals going through them, using passive electronic elements including inductors, capacitors, and resistors.

Due to lower frequencies needing more power to move, there is a possibility of there ending up being an excess of power in the passive crossover filter. This excess power ends up in the resistors, which then gets converted into heat. There’s a reason anything higher than a tri-amp setup is rarely used in a passive bi-amp configuration. All of those internal passive crossover networks would consume a lot of power and generate a lot of heat.

Active crossovers take line-level or preamp signal, filter it, and then send the audio to the amp. These crossovers usually allow easy control in order to adjust the crossover frequency.

Active crossovers are necessary for large live sound venues that use huge numbers of speakers. If each speakers’ passive crossover system was used, there would be a good chance the venue would catch on fire from all of the generated heat.

In passive bi-amping, the crossover occurs after the amplification of the audio, so the passive crossover doesn’t have any way to bring the audio up to speaker level by itself, so it ends up filtering speaker-level audio from the amp.

Due to both amps sending the same unfiltered frequency audio content to the HF and LF inputs on the speaker, many don’t consider passive bi-amping as “true bi-amping.”

With active bi-amping, the crossover occurs before the amplification of audio, so the amp ends up amplifying the filtered line-level audio (lower than speaker level). Many view this method as “true bi-amping.”

These setups involve changing where different amp channels are routed to. They can both be set up to be in the active or passive bi-amping configuration with the placement and choice of crossover networks in the signal flow. 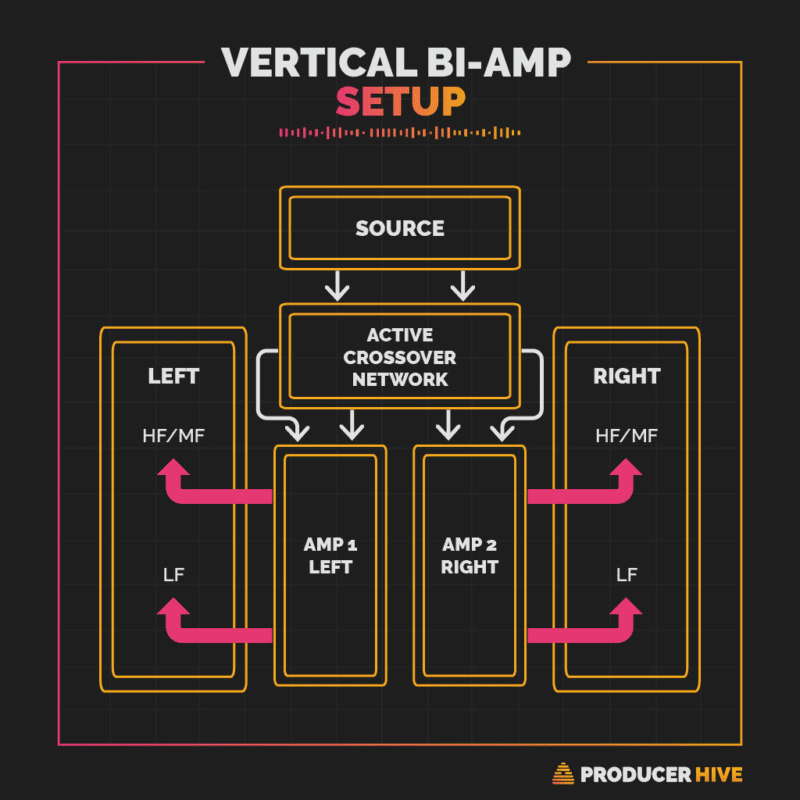 This setup most likely will always be an active bi-amp setup. There’d be little to no point in just relying on the speaker’s internal crossover networks here.

Unpacking The Science Behind Bi-Amping

If you’re interested in understanding the concepts of bi-amping even further, we need to review some audio science. It’s important to understand and be able to apply the concepts of audio signal flow, audio frequencies, and how a speaker physically functions.

Reading and learning about these concepts is needed so you don’t get lost as we dig further into this topic.

It’s important to understand how the audio signal goes from the input of the amplifier to the speaker driver. Suppose you have an output device, an audio signal, an amplifier, and a speaker.

The starting point in this instance is the actual socket where the signal exits the output of some device- usually the headphone socket of a phone, television, laptop, or the outputs on a console.

The signal flow starts at line level as it hits the amp’s input. Here, the amp raises the signal to speaker level, which is a higher voltage for driving speakers.

A speaker is a transducer, converting the energy passing through it from one type to another. In this case, the speaker takes the electrical audio signal and converts it to mechanical energy that moves the cone of the speaker. This leads us to a discussion on…

In case you didn’t know, everything we hear can be measured in frequencies. We measure these frequencies in cycles per second or Hertz. When listening to music, at any given moment in time, you will be hearing a number of frequencies simultaneously. If you want to hear these individual frequencies better, you can play around with an equalizer or EQ.

To get a good grasp of EQ, read our article on equalization (EQ), which demonstrates these concepts by looking at EQ on vocals.

Different frequencies move the speaker cones in different ways. When you pass a low frequency (LF) wave through a speaker, while the speed of the cone’s movement will be slower, the overall movement will be much greater in order to match the audio’s wavelength.

Important Workings Of A Speaker

In the bi-amping scenario, we have referred to, there are two sets of inputs per driver. There is a positive and negative terminal pair for the HF driver (tweeter) and another terminal pair for the LF (woofer). The positive audio signal and the negative audio signal travel down their own respective wires for each set of conductor wire for each driver.

When current is passed through a wire, a magnetic field is generated. The amount of positive and negative signal sent to the voice coil is determined by the polarity of the signal (if the signal is positive or negative relative to a zero point). In simple terms, the whole speaker is connected so that a signal with one polarity results in the magnetic field attracting the diaphragm, and by extension the cone, inward, while a signal with the opposite polarity will result in the outward movement of the cone. 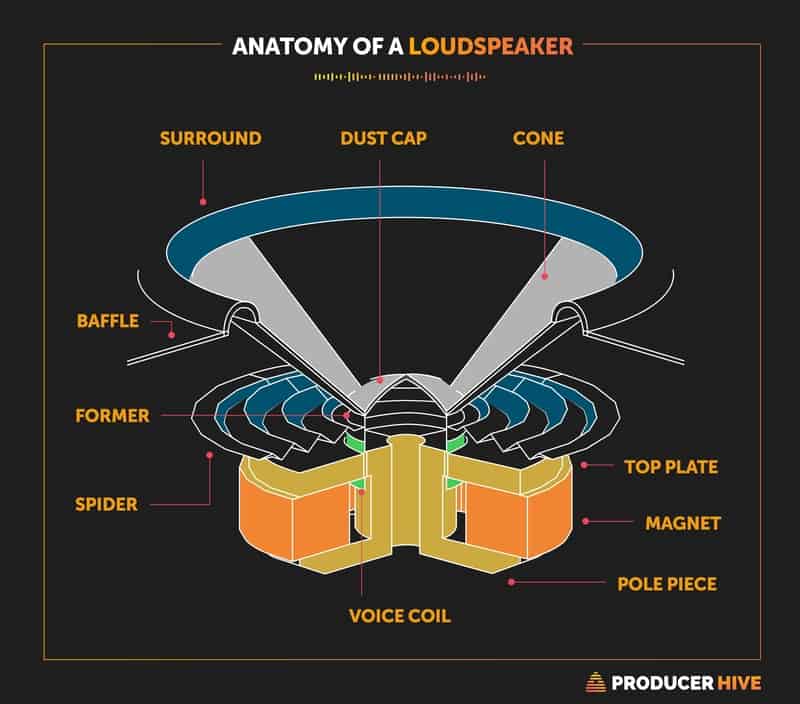 Speakers, nowadays, consist of 2 cones. The woofer is meant for low frequencies, and the other, the tweeter, is meant for high frequencies. Speakers will usually have an internal crossover that comes after the speaker input and before the transducer in the signal flow. Older speakers will likely not have the option for two different inputs, and therefore will not be capable of being bi-wired.

Simply put, bi-amping involves using two amplifiers to handle the low and high-frequency components of a signal separately, then sending these signals to the woofers (low frequencies) or tweeters (high frequencies) on a set of speakers.

Bi-wiring is not the same thing as bi-amping as it only involves the use of one amp; however, bi-wiring is a requirement for bi-amping your speakers.

Trust your ears (and this article) and you’ll be on your way to a bi-amp setup that works best for you!

(If you’re setting up your speakers, you need to check that the speaker cable is the right length and gauge. Find the answers you’re looking for in Does Speaker Wire Gauge Really Matter?)