What Is Forte In Music? (Beginner Explanations & Examples)

Shelby Lock
Songwriting Tips
Disclosure: We may receive commissions when you click our links and make purchases. Read our full affiliate disclosure here. 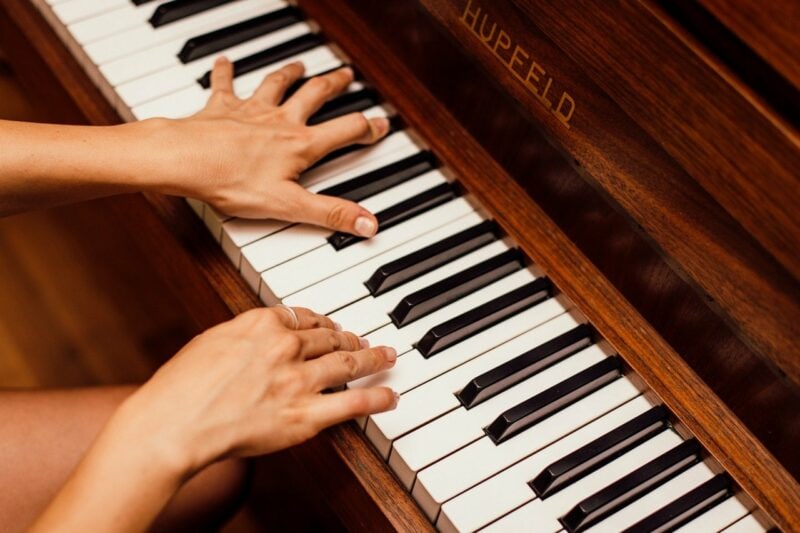 What is forte in music? Like many others, you may be wondering exactly what this means too. And if you’re confused about why musicians talk about playing a passage ‘piano’ but there’s no piano in the song, you’re not alone.

Understanding all the different dynamics written on sheet music can be tricky. What do all of the different p’s and f’s indicate?

Dynamic markings are ways of notating how loud or soft a passage of music should be played. Forte in music means loud, and piano means soft.

However, there are many other dynamic markings you might see. In this article, we will take a deep dive into the notation and performance of music dynamics.

What Is Forte in Music?

In Italian, the word forte literally translates to strong. Most instruments require more force to play music loudly, which is why forte today means loud.

In music notation, a forte marking means the corresponding passage should be played loudly. It is notated as an f in sheet music.

You may also see ff in sheet music. This is called fortissimo, which means the passage is to be played very loudly.

Sometimes, you’ll see fff. This is fortississimo, which means to play very, very loudly. Rarely, a composer will use the loudest dynamic available in most music notation software, the ffff.

This is fortissississimo, or very, very, very loud! Most of the time, ff is the loudest dynamic you’ll encounter.

Fun fact: the piano was originally known as the pianoforte because unlike its keyboard predecessor the harpsichord, it could play at many different volume levels, including forte and piano.

(If you’re after the best virtual piano plugins for your DAW or notation software, check out 6 Best Free Piano VSTs That Sound Incredible)

In order for us to have forte, we need to understand the other possible dynamics. After all, forte loses its effect if there aren’t softer dynamics to compare it to.

Mezzo forte is one of the most common dynamic markings you’ll come across. The word mezzo means medium in Italian.

Mezzo forte, then, means medium loud. Many musicians think of mezzo forte as playing at an average volume, neither soft nor loud.

Mezzo forte is notated as mf in sheet music.

Piano is used for quiet music. You’ll see piano notated with a p.

In modern classical music, you may see an n, especially in sheet music for clarinets or saxophones. This is short for niente, meaning ‘nothing’ in Italian.

This indicates that a player should start or end a note as softly as possible. (It typically follows or precedes a decrescendo or crescendo respectively, which we’ll discuss more later.)

Practically speaking, a niente is considered to be pianississimo. However, you may occasionally see pppp as an option in your music notation software.

As a pianist, I have personally never come across a passage of piano music that uses the pppp dynamic.

Just as there is mezzo forte, there is also mezzo-piano, meaning ‘medium soft.’ Mezzo piano means you should play softer than mezzo-forte, but louder than piano.

Forzando looks like it’s related to forte, but it’s actually more of an accent than a dynamic. It is most commonly notated as sfz, or sforzando, which emphasizes that this effect is to be played suddenly.

Sforzando isn’t a dynamic marking in the same sense that forte is. Instead, sforzando and forzando indicate to play the note it’s attached to with sudden emphasis.

It is typically interpreted to mean that note should be played loudly, or in a way that makes it stand out compared to surrounding notes.

Sometimes, you’ll see an sf, especially in Beethoven’s music. This can mean ‘suddenly forte.’ However, there is debate among music scholars about the precise definitions and differences between sfz, fz, and sf. Many players interpret them all the same way.

Unlike a forte dynamic, sforzando only applies to whatever note or chord it appears with. On the other hand, a forte indicates that the entire passage that follows should be played loudly until another dynamic marking indicates otherwise.

How can something be both forte and piano? It’s easy to see why this dynamic causes confusion. Fortepiano should also not be confused with pianoforte, the original Italian name for the piano.

A fortepiano mark means to play the corresponding note or chord forte and then play everything that follows at a piano dynamic.

Although a sub. p marking is most common, you may occasionally see a sub. f. In these cases, sub. is short for subito, which means ‘suddenly’ or ‘immediately’ in Italian.

This indicates that one should abruptly switch to that dynamic, rather than gradually building up or fading down to it. This is a stark contrast to the next couple of terms…

A common device is for a passage to gradually increase or decrease in volume. An increase in volume is called a crescendo and is notated like a less-than sign that spans the length of the passage with the gradual increase.

A decrease in volume is a decrescendo, notated like a crescendo but as a greater-than sign instead. Sometimes, you’ll just see the words cresc. or decresc. in a score instead.

For example, you may encounter a passage that starts with a piano dynamic and then has a crescendo up to a forte. Or, you may see a passage start with a forte marking and decrescendo to mezzo forte, or any other dynamic level that is softer than a forte.

Example of Forte in Music

Beethoven’s “Pathetique” Sonata is a great example of a classical piece that uses nearly all of the common, above-mentioned dynamic markings. In this score video, you’ll see (and hear) lots of sf, fp, ff, pp, and more:

When you hear a live performance, forte is easy to distinguish because it’s the louder part of the music. But what about in a recording?

Engineers of classical music recordings typically preserve as much dynamic range as feasible. On the other hand, in most commercial genres of music, recordings are significantly compressed.

(For a deeper look at compression and dynamics in music, check out What Is Dynamic Range Compression? (Audio Compression Explained))

This means that, in a commercial recording, it’s harder to tell when something is forte based only on the volume.

Instead, you can tell a section of a recording is forte based on timbral (tone quality) changes of acoustic instruments. You hear more harmonics on pianos and guitars when they are played forte.

The human voice, too, changes timbre at different dynamic levels. Even if a recording’s loudness is reduced through compression, these timbral changes remain.

It will still seem forte even if there is not much contrast in volume levels in the recording.

Producers can also create a sense of dynamics in a recording by varying the textural density of instruments during different sections of a song. This can help bring back the sense of excitement that comes from hearing music played forte in a live performance.

A forte is a type of dynamic marking in music notation that directs a performer to play the passage loudly.

In addition to forte, there are also many other dynamic markings directly related to the volume of a performance.

If you want to learn more about music theory, we’ve got you covered: