Vinny Kaul
Songwriting Tips
Disclosure: We may receive commissions when you click our links and make purchases. Read our full affiliate disclosure here. 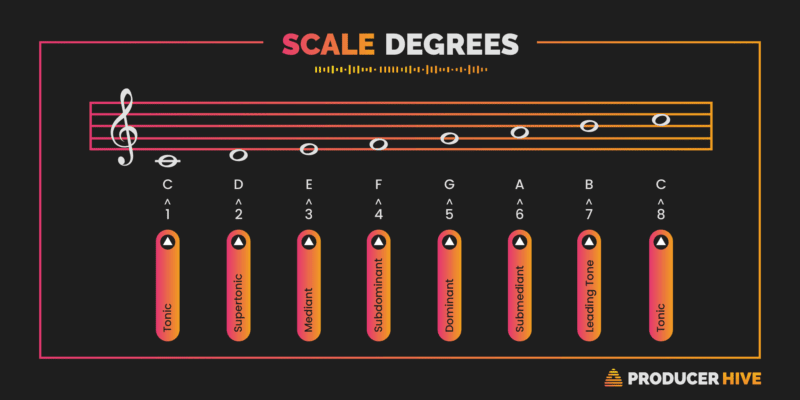 The human ear finds varying levels of pleasure in deviations and dissonance.

Let’s say I give you a toy xylophone that only plays notes of the C major scale. Thus, every note you play is either a C – the tonic – or a note in a scale that is at a fixed distance from C.

In a few minutes, you’ll realize that all notes aren’t equally harmonious when played contiguously to a C – the tonic. Playing the C after the E feels different from playing the C after a G. What does this tell us?

Firstly, it’s inviting you to understand musical scales in the context of a ‘key’. A scale isn’t a randomly (or arbitrarily) organized set of notes. Each note is a scale degree with a name/number and a specific function.

If you’re anything like me, you might feel apathetic to the stick-in-the-mud names when it comes to music theory.

You’re keen to know how to use them. That’s why I’ve streamlined the key details and loaded this post with ideas on using them musically.

These practical insights, I hope, will serve as a springboard to explore melodic and harmonic concepts. On that note, let’s take an in-depth look at the names of each note in a scale.

Why Are Scale Degrees Important?

By now, you should know that music works in waves and layers of tension and release – or dissonance and resolution. You are the puppet master with many rhythmic, harmonic, and melodic tools at your disposal. But how do scale degrees fit into this paradigm?

Scale degrees have a unique and quantifiable function. In other words, they carry a certain amount of tension and a pull towards certain notes in the scale.

For instance, a seventh scale degree in a major scale sounds unstable and has a strong desire to move to the tonic.

Some scale degrees have a more easy-to-identify sound and function, while others are more subtle and/or less common. For example, the tonic and dominant are very easy to understand. The rest are not as easy to define as there can be many ways to interpret them. 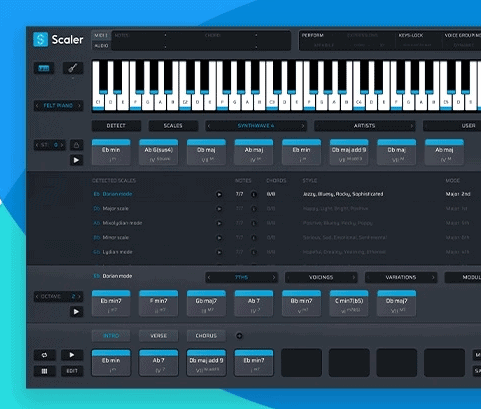 I could chalk up “formulas” for you to grind mindlessly. For example, going from the subdominant (4th scale degree) to the tonic is a gentler version of tension-resolution compared to moving from the dominant to the tonic.

However, this can quickly become misleading if not understood in the correct context. Plus, you need to derive your own ideas through learning theory and ear training. Over time, you’ll learn about avoid notes, weak/strong beats, and other tropes used in a composition.

A scale degree (also called a ‘scale step’) refers to a name and/or numerals assigned to each step of the scale, starting with the root note.

Every scale has a tonic – the first note that establishes the octave. Let’s say we’re in the key of C, so the C-note is our tonic. Every scale-note that follows the tonic is a scale degree.

However, there are corresponding technical names for each of them as well. Each name indicates two things – the function of that note/degree within the scale and its relationship to the tonic.

This table is just a thumbnail sketch for quick reference. Now, let’s look at each scale degree name in more detail.

A tonic is the first note or first degree of any scale. The tonic is the head honcho or the big kahuna. The scale/tonality exists because we assigned a tonic in the first place. It’s the key center and the note of ultimate resolution – the feeling of home.

It sounds strong, complete, and is an ideal way to start or end a melody or phrase.

Pro Tip: Use the tonic frequently to create a very harmonious and memorable melody. Don’t use it a lot if you want to create an edgy, emotionally potent, or tense melody line. Also, avoid the tonic too much in a verse if your chorus has a tonic-centric melody.

The Supertonic or second degree of the scale is one step (a whole tone) above the tonic. Here, ‘super’ is a prefix that denotes ‘above’. So, it’s the note above the tonic.

The Supertonic is a non-chord tone, so it sounds queasy when you let it linger. It has mild tension and tends to make a melody sound unfinished or incomplete.

The Supertonic has a pull towards the dominant (you see it in the chord equivalent – the ii-V).

Pro Tip: Use the supertonic (2) as a note that leads to the tonic. It’s commonly used as an in-between note (passing) and over suspended chords (i.e. Csus2). You can learn more about this in the post All About: Suspended Chords.

The Mediant is the third degree of a diatonic scale that expresses whether you’re in a minor or major key. It’s midway between the tonic and the dominant degree.

You could say that the third scale degree is the ‘vibe’ of the scale. After all, a chord is only major or minor when you add the third (mediant) to the triad.

Pro Tip: In a major scale, it reinforces happiness and brings out the dark/plaintive sound of the minor scale. Ask any blues player, and they’ll show you how to use both over any 12-bar progression via a major-to-minor or minor-to-major third move that’s very common in blues-based licks/solos.

The Subdominant, or fourth degree, is the third strongest note of the scale. Every scale has three power notes or primary notes: Tonic, Subdominant, and Dominant.

The Subdominant is the weakest of these three, but important nonetheless. If you’ve read our post on the circle of fifths, you’ll notice that it’s the fifth below the tonic.

Pro Tip: The perfect fourth (or eleventh) in a major scale is called an “avoid note”. For example, in the key of C, the F note (4th degree) is a semitone above E (3rd). If you play the F on top of a C, it will muddy the sound i.e. it weakens the melody/harmony. Jazz guitarists often use the #4 or #11 while improvising over a major scale.

The Dominant, or fifth degree, is the power note of the diatonic scale. It’s called the dominant because it’s the most dominating degree after the tonic. If the tonic is the master, the dominant (5th) is the beefy pit bull by its side.

What is Species Counterpoint in Music?

We’ll discuss this in more detail in the Harmonic Functions post, but you can also read my post on dominant sevenths for information on cadential progressions.

Pro Tip: If you transcribe vocal melodies, you’ll notice a lot of musicians (especially songwriters) tend to start the (vocal) melody on the 5th note. This isn’t a rule, but a common trope used by musicians. The 5th degree has a gravity about it that is neither completely resolved, nor highly dissonant. It grabs your attention with just the right amount of musical instability, often making it very easy to move to the tonic.

The Submediant, or sixth degree, is also called the lower mediant as it sits halfway between the tonic and the subdominant. It’s the la in the Solfege of a major scale and fa in the minor scale(s).

Just like the Mediant, the Submediant can also define the ‘vibe’ of the scale. However, it’s not as emphatic as the Mediant. It’s more subtle and has a stronger pull towards the fifth/dominant degree.

The leading tone (better known as the leading note in UK/Europe) is the seventh scale degree. It’s a half-step away from the tonic octave within a major scale.

The half-step resolution is the strongest. Therefore, the seventh degree is very adamant about being resolved to the tonic.

That’s why it’s called the leading note; it leads you to the root. Make note that only a major scale’s seventh degree or a raised seventh in a minor scale (harmonic and melodic minor) share this name. It’s imperative to have a half-step distance from the tonic.

Pro Tip: Use the seventh degree right before the root chord (I) to set up the melody for a strong resolution. It has an aura of finality that sounds very gratifying. Plus, it strengthens the tonality of the music piece.

We talked about the major scale’s seventh degree that is a semitone away, but what about the natural minor scale with a minor seventh degree? A Cmin (natural minor) scale has a flat seventh (Bb), which is a whole step away from the C (tonic). That’s the subtonic.

Just as ‘super (tonic)’ is a degree above the tonic, the ‘sub (tonic)’ refers to a note that is a degree below. Therefore, the seventh degree, when it’s a whole step below the tonic, is called a Sub tonic instead of a leading tone.

The Octave is not a new scale degree. It is just the tonic but an entire scale length higher (C3 to C4 on the piano). From the Octave, you will start counting the scale degrees all over again with the Octave assuming the same position as the Tonic.

If you know basic music theory, you know that a minor key encompasses the natural, harmonic, or melodic minor (ascending and descending). You can brush up on your knowledge with our posts on the major and minor scales.

We’ve even got a separate article on the natural minor scale (b3 and b6) but the other two types can also be understood in the same manner.

Before we go, here’s an important note – don’t mix up these names as corresponding terms for notes or intervals. For hands-on purposes, train your ear to identify scale degrees and how to relate them to your instrument.

It’s music theory 101. We will use these terms while discussing the music theory of the harmonic function of chords, so practice them well. It’ll expand your listening, advance your improvisational skills, and help you write better melodies in the future.