Tom Petty nonchalantly crooned over them in Free Fallin’, Rush played four of them in succession in Natural Science, and MJ made you bob your head to them in Black or White.

Suspended chords have pervaded almost every genre. But the 1950s and 60s were a high-point for them. Modal jazz was at its peak and people figured out that a ‘tonal center’ is for plebs. Herbie Hancock set the ball rolling with Maiden Voyage, which has now become the milestone of ‘new harmonic perspectives’.

The jazz-sus torch was carried forth by Miles Davis, Larry Young, Bill Evans, and Chick Corea, and other exemplary musicians who used suspended chords to modulate modes to accompany chords.

Whether you are a beginner looking for a basic introduction or an intermediate musician who thinks you’ve already got them down, by the end of this post, you’ll think that sus chords are the best thing since sliced bread.

What is a Sus Chord?

“Sus” is short for suspended. A “sus” chord refers to the suspension on the third note and replacing it with a non-chord tone such as the fourth – or occasionally the second note – of the scale. For instance, the C major triad contains C-E-G (R-3-5). If you suspend the E and replace it with F (the perfect 4th), you now have C-F-G –  the C sus4 chord. 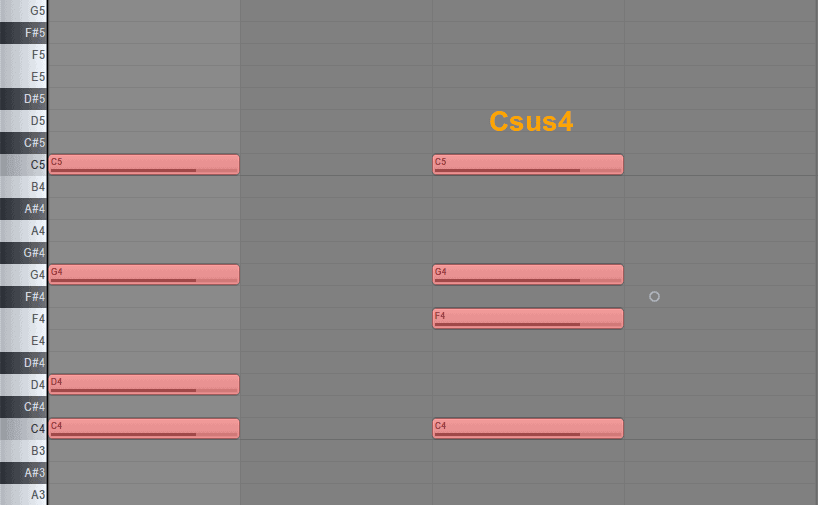 The sus chord sound is described as open-sounding, hungry for resolution, and mildly dissonant. In triads and chords, the third note is an important chord tone.

The third helps us determine if a chord is major or minor. Suspended chords replace it with a non-chord tone (2nd or 4th). In the absence of a third, the chord doesn’t establish a tonal center.

Since sus chords are dodging a strong sense of tonality, they don’t identify as either major or minor. This creates a sense of mystery or ambiguity for the listener. Thus, you can think of them as a way to deliberately “obscure the identity” of a chord or a chord progression, “deliberately” being the keyword.

For example, if I start a song with an Asus2 chord, there is no way for you to tell if it’s in the key of A or Amin. If I continue to play a Dsus chord, you still don’t know if we are in the major or minor territory.

What Are The Types of Sus Chords?

There are two types of sus chords – sus2 (R, 2, 5) and sus4 (R, 4, 5).  There is a palpable difference between the dissonance generated by the fourth and the fifth note in a sus4 chord, and the root and second in the sus2 chord.

Generally, the sus4 chord is considered to be more flavorful and thus is more popular.

Sus2 chords sound wistful – a little more melancholic – because they don’t have the pull towards the parent chord. Csus4 has a stronger pull to resolve to C (major or minor) as compared to a Csus2 chord. Let’s hear this in action to understand it better:

How do Sus Chords Work in Music?

Sus chords want to resolve, but they also don’t care. They resolve downward by a step or to the parent chord.

Here are the three most common things you can do with a sus chord in a chord progression:

Conventionally, the displaced note has a pull towards the 3rd.  A stepwise resolution (return to parent chord) is the simplest way to resolve.

But if you look at how they have been used in music (and we will later), that only happens 50% of the time. Probably less often if you are listening to post-bop, modern jazz, or The Mamas and Papas, who clearly have a penchant for lingering, unresolved sus4 chords.

How to Use Sus Chords:

It is common to play a sus chord in succession with a parent chord to resolve them quickly to return to the stable harmony. The displaced note (2nd or 4th) resolves to the third when you do this. This is the most common use of sus chords in popular music.

Sus2 and sus4 chords can be used to spice up a common chord progression. They can also be used to liven things up when you are playing a single chord over and over. This will work for any major or minor chord.

You can hear this concept in action in the intro of Bryan Adam’s Summer of ’69 and in Queen’s Crazy Little Thing Called Love. Just imagine how drab these pieces of music would sound in the absence of any variation!

With The Chord: 7sus4

Sus chords can be 4-note chords such as the 7sus4 chord (generally played on the 5th of a key). It has no cadence, sequential flow, or motion. Let’s listen to a C7sus4 to set the mood:

The simplest way to use this chord is to throw it briefly into a chord progression as The Beatles did in the verse of Hey Jude. However, a V7sus4 chord doesn’t function as a V chord.

It lacks the tritone interval, which gives it meandering quality. So, you can hold a V7sus4 without resolution or resolve it to the V7 before you go back to the I.

For example, in the key of C, you can go from G7sus4 to G7 before you resolve to Cmaj7. Or again, linger on the chord to create a feeling of “suspension” – that conveys the dominant harmony with milder dissonance.

We won’t deep dive into that, but you can check out Berklee Online’s notes on this.

In a ii-V-I Cadence:

The 7sus4 chord is exactly halfway between the V7 chord and an iim7 chord. You can use this in an ii-V-I cadence. The chord gives the same feeling of ‘movement’ that we get from a dominant chord. For that reason, it’s often used as an ‘intermediate’ chord before the dominant V7.

The latter 7sus4 has the consonant, soothing quality of the ii-chord which, unlike the V7, contains perfect fifths (between the root & fifth and the third & seventh) and no tritones (the major third and minor seventh of a dominant chord form a tritone).

The 9sus4 chord, sometimes called the jazz sus chord, is often written as the eleventh chord in song charts. The C9sus4 (C-F-G-B♭-D) is similar to C11 (C-G-B♭-D-F). It is the same notes but not in the same order.

What Is The Mixolydian Mode? (With Examples)

And, the order matters if you want it to. Listen to Carole King – I Feel the Earth Move (at 0:30)

This 1-5-9 (C-G-D for Csus2) triad can be heard in various rock and pop songs. Andy Summers (From The Police) has used this in Every Breath You Take and Message in a Bottle – two of The Police’s greatest hits.

What happens if you take a power chord and add the 9th? You could denote it as a 5add9 chord or a sus2 because it features identical notes. Here we have two perfect fifths stacked and have intentionally avoided the third to create ambiguity.

For instance, Csus2 is C, D, and G, which are the same notes you would play for C5add9 (C G D) but in a different order. The order matters if you want it to, but it’s harder to ignore when moving from chord to chord.

Of course, song charts continue to confuse us as we travel across countries and continents with the use of 5+9, 5add9, sus2, or even “2” at times. Either way, your pinky finger might throw a hissy fit when you attempt it on a guitar.

Can you use the third in a sus chord?

There is no rule to prohibit you from using a third in a sus chord, especially a sus4. However, you should play the third above the octave – as the tenth. Having said this, it won’t do much and you’ll have to find a way to justify it – if only just to yourself.

Plus, it may involve a lot of ‘finger gymnastics’ for guitar players. Piano players might find easy and palatable ways to use a third or tenth in a sus chord. They may even get away with rootless sus9 chords while doubling the root if they’re into Red Garland (the bandleader for Miles Davis).

Folks musicians rely on simple chord progressions (I-IV-V-I) with triadic forms and not a lot of changes. A sus chord can enable interesting variations to cut the monotony. Playing a sus2 or sus4 back and forth with the parent chord is standard practice.

For more interesting ideas, you can binge on Joni Mitchell. Joni’s use of modality and suspended chords can be heard in the interlude of Sistowbell Lane, The Dawntreader, Marcie, and others.

Of course, besides being a frickin’ genius, she also played in all kinds of unthinkable guitar tunings such as EBEG#BE, CGDGBD, and CFCGAC. So, if alternate tunings aren’t your thing, good luck!

Sus chords are a great tool for every songwriter. If you are new to them, study their use in popular music and start with simple applications. As you learn more about music theory, you’ll uncover more advanced ways to ‘suspend’ your audience.

Either way, sus chords see a lot more action than augmented chords – and we’ve got a whole article on this topic here. Once you’ve read this, you can follow it up with Noah’s brilliant take on diminished chords – arguably the most dissonant of chords. From here, you should have a few new tricks up your sleeve when it comes to creating – and releasing – tension in your music.