Cherry Audio Polymode Review (Best Polymoog Emulation Ever?)
VERDICT
Overall, Cherry Audio’s Polymode Synthesizer is a fun and quirky synth with a number of interesting features that are worth checking out if you think you’ve seen (and heard) it all when it comes to virtual analog synths. It can cover a lot of ground and is an excellent choice if you want a versatile but distinctively retro sounding synth plugin.
Features
8.2
Sound
8.5
Value For Money
9.5
PROS
Unique design with unusual filtering options
Easy to use with flexible interface, though not for absolute beginners
Great analog-sounding effects
Easy MIDI mapping
Lots of sound design potential
CONS
Not as good as DCO-106 for brassy sounds
Intimidating for beginners
8.7
OUR SCORE
READ REVIEWS
Plugin Boutique

Cherry Audio is known for making a number of fun emulations of classic and sometimes lesser known obscure synthesizers. Their Polymode synthesizer is an example of the latter, and it’s unlikely you already have a synth like this in your plugin collection.

Polymode is a revival of the ambitious Moog Polymoog synthesizer that adds a number of upgrades and gives you a lot of bang for your buck. In this review, we’ll see why it’s worth checking out, starting with a roundup of its features.

(Polymode is currently on sale for $29 until the end of March! Grab it from Plugin Boutique or Cherry Audio’s website.)

Polymode ultimately stands out for its unconventional design, which is certainly something the Polymoog was known for. It has some very unusual filtering options by way of the ‘Resonators’, ‘Mode Filter’, and ‘VCF’ sections which are all mixed together in parallel (though you don’t have to use them all at once).

Due to the important role filters play in this synth, it is firmly in the subtractive school of synthesis. But Polymode is very different to other subtractive virtual analog synths I have tried.

Cherry Audio has made some tweaks that update the Polymoog’s design. This is not a bad thing, as is most often the case with emulations the overall character of the synth is preserved while some ‘quality of life’ improvements are made. This opens up the sound design potential of the Polymoog and makes it more intuitive to use as well, so if you’re looking for an exact recreation of the original synth and nothing more, I think you’re missing the point.

Plus, everyone loves the convenience of plugins except those DAW-less freaks who want you to listen to every little thing they make (just kidding, but seriously!!).

In terms of oscillators, you have two ‘Ranks’ which are really just VCOs with saw and square / pulse waves, perfectly fine considering the focus on filtering in Polymode.

The ‘Resonators’ section consists of 3 filters in parallel, and there are controls for adjusting the cutoff, emphasis (resonance), and gain for each band. You get a choice between -12db and -24db slopes and four filter types (low, band, notch, high) but unfortunately you cannot mix and match the filter types, so these settings affect all three resonator filters. Despite this, there’s still a lot of fun to be had with the resonators, and I think they are a standout feature.

The ‘Mode Filters’ according to Cherry Audio are best thought of as preset EQ curves. This is another update which makes a lot of sense as originally these buttons switched between presets, while engaging a fixed filter bank that was exclusive to the preset. Of course with plugins there’s no real need for this, so in Polymode these buttons give you access to the filter circuits without jumping to a preset. 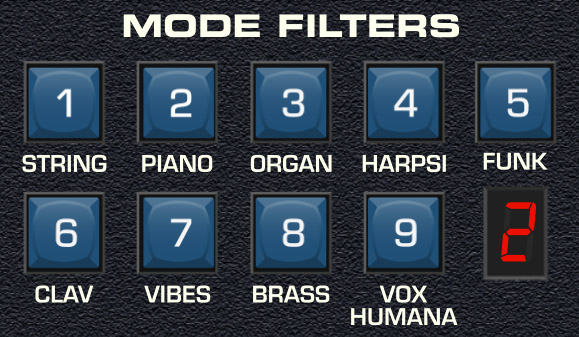 The modulation section is improved so that basically any parameter can be freely controlled by a number of sources. This means Polymode is great for heavily modulated sweeps and sound effects, as well as organic pads that combine a variety of subtle modulation techniques to achieve lifelike movement.

I would love to see an option for attaching multiple modulation sources to the same parameter, but if you’re crafty enough you can get by as there are dedicated LFOs for each oscillator’s fine tuning plus the filter and resonator sections also have LFOs that are separate to the main modulation generators. It’s worth noting that pretty much every parameter can be automated in your DAW plus MIDI mapping is a breeze.

There are dedicated filter and amplitude ADSR envelopes, although as is tradition with Moog synths, the decay and release controls are controlled by the same slider. Your mileage may vary as to how limiting this is for you, but it’s certainly no deal-breaker.

You’ll also find four effects modules on board – chorus / ensemble, phaser, echo, reverb. Disappointingly, there’s not much in the way of overdrive and saturation, which is a shame as I think this synth would distort really nicely. So you’ll have to rely on overdrive / distortion VSTs instead!

Ultimately this synth does not feel lacking in any major way, even if there are a few features that I would really love to see added. Just because there are synths like Serum and Vital out there that offer all sorts of modulation options and other advanced features, it’s hard to give any virtual analog emulation synth more than an 8/10 here as really the sound and tonal character of the synth is more important.

If you want to read more about what Polymode can do, Cherry Audio has the full user guide to Polymode on their website. But now let’s talk about how it actually sounds…

The Polymode is an excellent choice for ‘smooth’ synth sounds like strings, vox, basses, and lush pads. It’s also very capable of making a wide array of unusual sound effects that have a vintage 60s and 70s quality.

Sonically, it is rich and dark in a sort of gothic way, or at least that’s where I think Polymode is most at ease. It can sound a bit harsh when it’s trying to be ‘brassy’, but this could very well be a quality the original synth had. It’s foolish to think that analog synths always sound lush all the time, and Moogs in particular have a certain raw quality that is hard to deny.

Not to imply it only sounds good when the cutoff is low, as it’s also capable of nice bass growls, funky stabs, and hissing ambient textures.

But if you’re looking for that classic – yes I’m going to say it – ‘analog warmth’ then Polymode still certainly delivers.

Without much fuss, you can get some amazing string sounds out of it. I was getting genuine Vangelis ‘Blade Runner soundtrack’ vibes just by holding a few notes! The onboard reverb and ensemble / chorus effects really work well together when it comes to adding density and achieving a thick analog texture.

The effects sound particularly good and compliment the synthesis engine well. They have a smooth and dreamy quality that is very useful for ‘textural’ genres like shoegaze, ambient, and lofi music. The reverb will take you into outer space if you let it, and the echo module dampens really nicely.

Every part of this synth has the sort of analog flavor you expect from a decent emulation.

The filters all sound Moog-y as they should. My general impression of Moog filters is that they have a ‘vocal’ quality that ranges from human to cat-like depending on the filter settings and the pitch of the oscillators.

The filters on Polymode are very ‘musical’ – sweet and mellow when the cutoff is below 1000 Hz, but above this they really sing, especially when the resonance is turned up. The filters don’t self-oscillate when the emphasis is maxed out, which is disappointing but I’m betting if the original Polymoog’s filters did this then Polymode would too.

I can’t say it sounds exactly like a Polymoog, but that’s because I’ve never had a chance to try a real one, and chances are you haven’t either. So what have you got to lose?

I’ve tried other Moog synths and have heard them on countless records just like you have and this sounds very close, so close that it does not matter if it is the real thing or not. It certainly sounds similar to the demos of the Polymoog on YouTube and that’s good enough for me.

Cherry Audio is well established at this point for really giving you your money’s worth. At the very least, consider how much a real working Polymoog 203a would cost at this point!

Polymode Synthesizer regularly retails for $49 but you’ll catch Cherry Audio plugins on sale throughout the year if this is more than you’d usually spend on plugins. I’d say $49 is pretty darn good for a VST synthesizer that is as useful as Polymode.

If you want a VST synth that has a lot of classic sounds at the push of a button try Cherry Audio’s DCO-106. There are still a lot of nice presets included in Polymode, but the Juno-106 sound has more pop appeal, plus it’s easier to get your head around if you’re making your own patches.

Overall I really like Polymode for its dark, cinematic sound and of course it is much more complex than the DCO-106 in terms of how deep you can go with it, giving you a lot of value for money.

If you’re into sound design and experimenting but are on a budget, Polymode is a great pick as you can make a huge range of interesting sounds that aren’t as readily available in other virtual analog synths.

There are a lot of unique touches that make Polymode a good addition to any collection regardless of how many synths you already own. Compared to an Arturia synth with similar features, Cherry Audio still delivers just as much for half the price. Of course Arturia’s plugins are top-notch when it comes to their overall visual design and layout, but I still dig Cherry Audio’s deliberately retro 90s / 00s plugin look – it’s oddly comforting and unpretentious.

Overall, Cherry Audio’s Polymode Synthesizer is a fun and quirky synth with a number of interesting features that are worth checking out if you think you’ve seen (and heard) it all when it comes to virtual analog synths.

I’m a big fan of it’s Moog-y sound which is truly versatile, and the additions Cherry Audio made truly complement the ambitious and really quite mad synth that Moog first released way back in 1975.

I would eagerly recommend Polymode to anyone who is after a virtual analog VST synth that can cover a lot of ground while offering a number of refreshing features that seem intimidating at first but are ultimately quite powerful and easy to use.

You can grab Polymode from Plugin Boutique or Cherry Audio’s website. It’s available for Windows and Mac as a 64-bit plugin in AU, VST, VST3, and AAX formats and there is also a free 30-day demo available.

(Polymode is currently on sale for $29 until the end of March.)