Noah Teachey
Ukulele
Disclosure: We may receive commissions when you click our links and make purchases. Read our full affiliate disclosure here.

The ukulele has long been the instrument of choice for little children.

The small neck and body make it great for the smaller hands, and the nylon strings are easy on the fingertips.

Not only are they easy to play, but they’re also cheap as chips! You’ll be able to pick up a decent quality uke for under $50. This gives them a low barrier to entry, and it’s less of a big deal if it gets damaged (which kids are prone to doing).

When it comes to learning the ukulele, the trick is to dive into music you enjoy. All your favorite songs can easily be translated to the ukulele.

For kids, it can be helpful to get them playing something simple so that they can feel successful right away and learn to enjoy the process of learning and playing new tunes successfully. This soprano ukulele has 12 scales and can play any songs you want - making it the perfect beginner ukelele for children!

For full HD-quality images of all the song sheets, you can download them here.

What Are The 7 Easiest Ukulele Songs For Kids?

The great thing about using children’s songs to learn an instrument is that they tend to be written simply enough that a child can sing them. The chords are easy to hold and the strumming patterns are generally super simple.

1. The More We Get Together 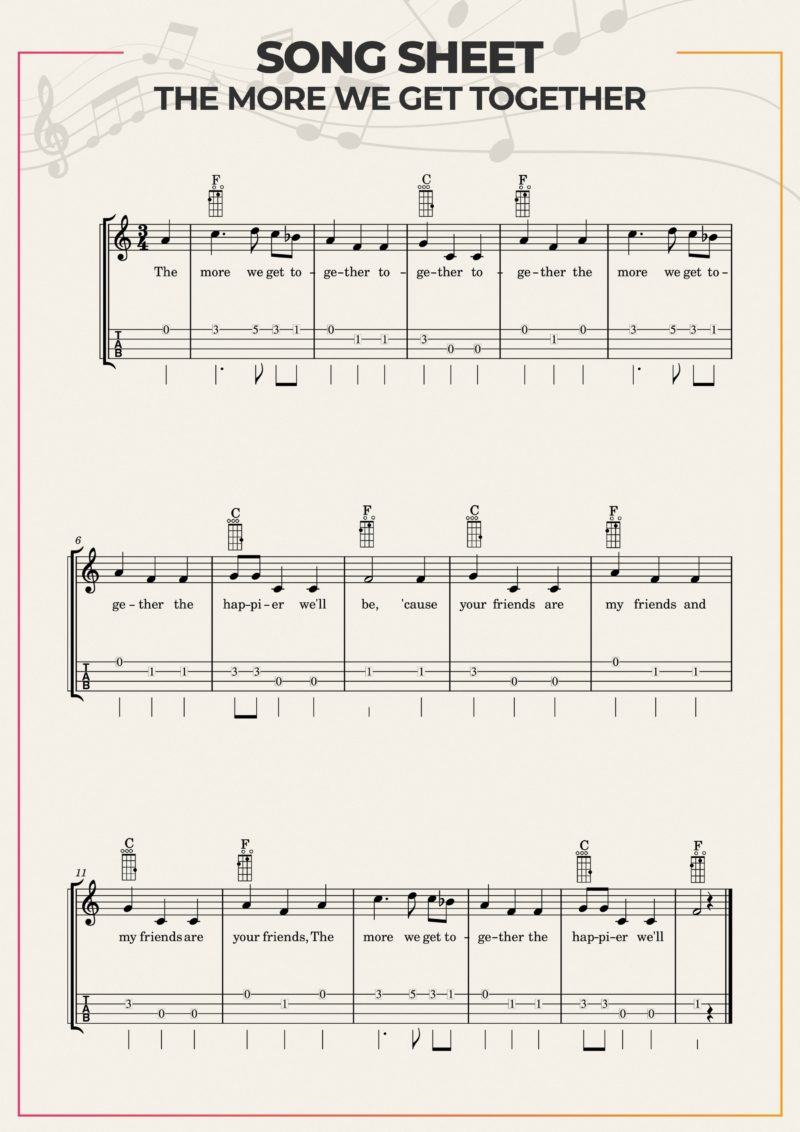 The More We Get Together is a traditional American children’s song taken from a 1679 Viennese tune by Marx Augustin by the name of “Oh du Lieber Augustin.”

It is a great piece for practicing chord changes early on.

Three Blind Mice is one of many nursery rhymes with a dark history and dates all the way back to 1609.

The three blind mice were meant to be three Protestant loyalists who were accused of plotting against Queen Mary I, to whom the “farmer’s wife” refers.

She and her husband, King Philip of Spain, had a great deal of land. The three accused Protestant loyalists in question were burned at the stake.

Whether or not you explain the backstory to the child ukulele student is up to you, but Three Blind Mice features a melody within an octave, making it nice and easy to play, provided the player mostly knows their way around a major scale.

This one also oscillates between two chords, making it a good complement to The More We Get Together.

A young ukulele player can either learn it in the same key as a “bonus song” or learn it in a different key to practice two new chords in more or less the same fashion as they did in the case of Three Blind Mice.

That is, however, false. Mozart composed a set of variations on the tune, but the original is associated with a French folk song by the name of “Ah, vous dirai-je, Maman.”

With an incredibly simple melody limited to a range of just a major sixth and only two durations making for an easy rhythmic figure, this is one of the most singable melodies on our list.

That said, Twinkle Twinkle is a great tune to introduce into the repertoire for a child needing to practice quicker chord changes.

Continuing in our French streak, Frère Jacques is a one-chord tune with a recognizable melody a little over an octave in range.

This tune has the added bonus of being written as a round, which is a great tool for teaching independent melodic lines.

The ukulele teacher looking to get their student into more harmonically interesting music will find rounds a great way of introducing concepts without veering too far from music that feels easy and approachable for a beginner.

The thing with rounds is that they tend to be written with simple harmonies, as different chords from one section to the next can throw off the round.

For that reason, if you are in need of more complicated chord progressions for your ukulele lessons, you will have to look elsewhere than this simple French round.

Row Row Row Your Boat is another fun round, in this case with a simple melody that sticks to within an octave. You might think of this as a bonus song after having learned the mechanisms of Frère Jacques.

6. London Bridge Is Falling Down

The history of London Bridge Is Falling Down could warrant its very own article, with some scholars suggesting it may date to a Viking invasion in the eleventh century and others arguing it has something to do with human sacrifice.

As with Three Blind Mice, it is up to you how much of the history you share with your young ukulele player.

That said, the music itself, between the relatively simple melody constrained to within a major sixth and harmony consisting of only two chords, is certainly appropriate to introduce to beginners.

7. Mary Had A Little Lamb

Supposedly, the words for Mary Had A Little Lamb refer to a true story about a girl named Mary Sawyer who lived in Sterling, Massachusetts in the nineteenth century who adopted an abandoned lamb and nursed it back to health.

The melody of this tune sticks within a fifth, giving it the smallest range of all of the tunes in this list.

Like Twinkle Twinkle it is also limited to two different durations, thus the melody is quite simple. The one somewhat tricky aspect of the melody is that it begins on mi, or the third scale degree of the key in which it is played.

Other than that, as a two-chord song, it could not be simpler.

If the child in question is wise beyond their years, or pre-teens who are no longer interested in little kid music, even though they are beginners on ukulele, there is an alternative to the easy kid music

In these situations, I would recommend easy three-chord hits from among the canon of recent popular music. As I mentioned earlier, any song can be adapted to be played on the ukulele.

It may not sound exactly like the original, depending on instrumentation, but the melody and harmony can be approximated as far as getting the point across, which for all but the most discerning audiences will be good enough!