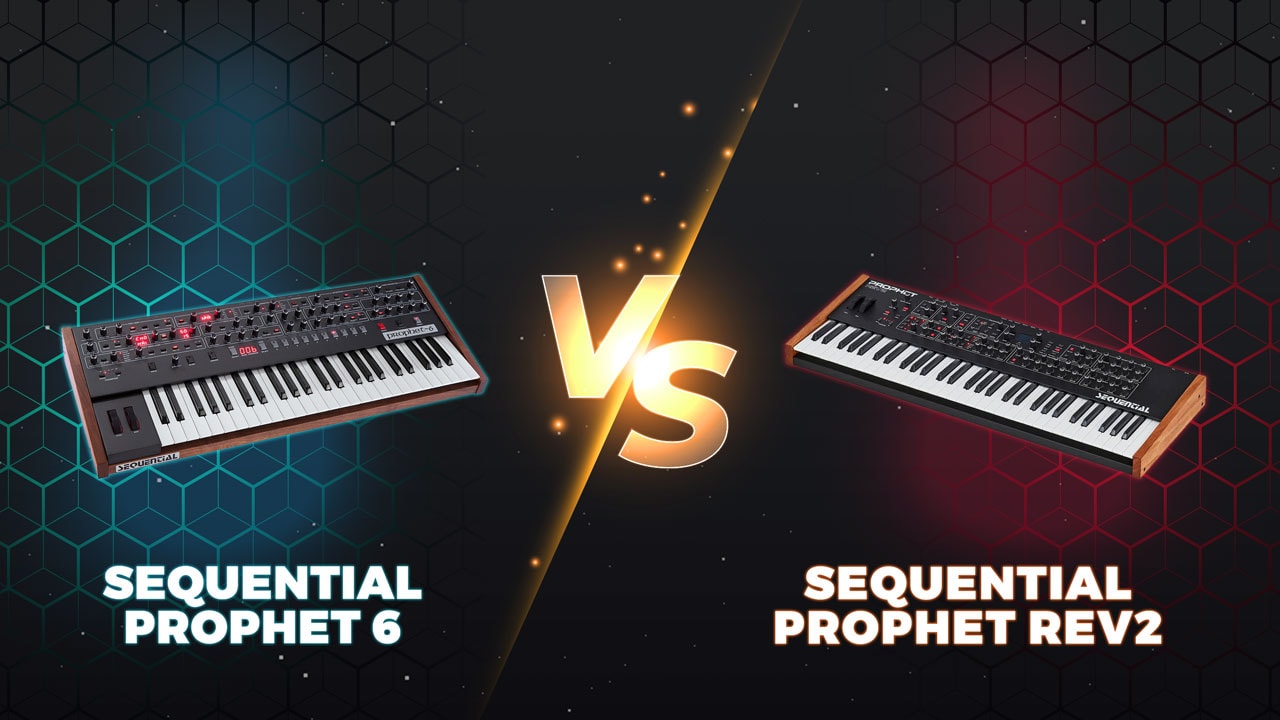 Prophet 6 vs Rev2 (A Side By Side Comparison)

​​The Prophet-6 and the Rev2 are two undisputed darlings of the polyphonic synth family.

Both these synthesizers are made by Sequential, with the guidance of synth legend Dave Smith. Almost all of Sequential’s modern keyboards look superficially similar, and these two synths are no exception.

In this article, we’ll glance at the differences between the two synths to help you come to an informed buying decision.

The Sequential Prophet-6 is Dave Smith's tribute to his groundbreaking analog polysynth, the Prophet-5.

The Prophet-6, as the creator Dave Smith puts it, is “the result of our effort to build the most awesome-sounding, modern analog poly-synth possible.”

The Prophet-6 takes all of the best aspects of the Prophet 5, such as the true voltage-controlled oscillators, filters, and amplifiers, and adds studio-quality effects, a polyphonic step sequencer, an arpeggiator, and more.

There’s a keyboard version and a cheaper desktop module if you just want to control it with MIDI.

What Is Prophet Rev2?

Sequential ups the ante (again) with the Prophet Rev2, a 61-key analog synthesizer that takes over where the legendary Prophet '08 left off.

The Prophet Rev2 was created by Dave Smith in an effort to remake the Prophet ’08 poly synth with enhancements and improvements in every department possible.

The initial goal of the creator was to make it a viable update to a modern classic.

The Rev2 has a ton of functionality, such as 4 LFOs, Curtis filters, a polyphonic step sequencer, an 8-slot modulation matrix with 53 destinations, and more.

Prophet-6 vs Rev2: Which Is Better?

The Rev2 can produce the same sounds that the Prophet-6 can, is $1000 cheaper, and wins in terms of functionality, features, LFOs, multiple-step sequencers, and more.

It is a far more versatile product for sound design, and you can do much more with it.

So, while the two are very similar, I recommend the Rev2 if you want to save $1,000 and get a slightly better product.

The Prophet-6 is around $3,000 and it comes with six voices, meaning you can play six notes simultaneously with it.

The Rev2 wins by a landslide regarding value for money.

The Rev2 has many more features than the Prophet-6, so if you are a musician who likes to tinker with the sound in many different ways, the Rev2 may be your best bet.

When comparing the two, the Prophet Rev2 wins this one.

There is a fairly significant difference in the filters of these polyphonic analog synthesizers, but not in terms of quality — just differences in tone.

The Rev2 gives you one analog Curtis low-pass filter per voice, and a choice between -12db and -24db slopes.

Ultimately, there is a give and take, which comes down to the sound. The Rev2 sounds a little darker to my ears, and the overall volume drops slightly when you apply resonance to the filter.

Either way, this category has no distinct winner as it is a matter of taste between which tone you like better.

The consensus among users is that the Prophet-6 sounds marginally better than the Rev2, even without tweaking and modulation.

Users report that the Rev2 is a little more brassy, requires a bit more work to sound good (while the Prophet-6 sounds good all the time), and is better for sound design than the Prophet-6 because of its modulation and control features.

To my ears, I think you are splitting hairs between their sound quality when fully dialed in, but the Rev2 gives you way more control over the sound overall.

So if you want a synth that sounds good all the time (despite having fewer features) then the Prophet-6 is for you.

However, the Rev2 is, by all means, an excellent-sounding synthesizer, and it’s highly unlikely you will be disappointed in the sound of either synth unless you are very particular.

The Rev2 comes with oiled African mahogany wood end panels, while the Prophet-6 comes with walnut end panels and trim.

The Rev2 takes a lot longer to find the sound you want, while the Prophet-6 is simpler and easier to create.

With fewer options, you can work faster with the Prophet-6 but can’t go as in-depth with the sound as the Rev2.

It’s a fair trade-off, and will ultimately depend on whether you’re a tinkerer or someone who just wants good sounds, fast.

The Prophet Rev2 and the Prophet-6 are too similar to justify buying BOTH, so for our money, if we had to choose just one, the Rev2 is the winner.

Overall, the Prophet-6 has a slightly better sound initially but doesn’t have nearly as much functionality and control over the sound as the Rev2.

If we’re talking about the best value, the Prophet Rev2 wins over the Prophet-6.

Personally, the sound of the Rev2 is not worse than the Prophet-6 when fully dialed in, so the extra $1,000 price tag of the Prophet-6 is unwarranted.

Having said this, if you’re not fussed by the unusual price discrepancy and just want a reliable synthesizer filled with classic polysynth sounds, then you might prefer the relative simplicity of the Prophet-6.

And, when fully dialed in, the differences between the sounds of these two synths are extremely similar.

The Rev2 is ultimately our pick for the better synthesizer, as it offers more potential for sonic exploration, even if it’s less immediately impressive than its cousin the Prophet-6.

Sequential ups the ante (again) with the Prophet Rev2, a 61-key analog synthesizer that takes over where the legendary Prophet '08 left off.

How Many Voices Do I Need For Rev2?

If playing up to 8 notes simultaneously will do for you, then get the 8-voice Rev2. It is $600 cheaper.

If you want to be able to play 16 notes at the same time, then get the 16-voice version.

Playing 16 notes at the same time is pretty useless unless you are looking to do a complex classical piece.

What Does Polyphony Mean?

Polyphony means you can play two or more notes at once in combination. Vice versa, monophonic means that you can only play one note.

So, if a synthesizer has 8-voice polyphony, you can play 8 separate notes simultaneously.

If you exceed the polyphony (i.e. hold nine keys on an 8-voice synth), one of the ‘older’ notes will often be cut off to compensate.

How Many Oscillators Does The Prophet-6 Have?

The Prophet-6 has two oscillators per voice, with the option between triangle, sawtooth, pulse, and square waves, pulse width per oscillator,

Is Prophet-6 A Stereo?

Is Prophet Rev2 Analog Or Digital?

The Prophet Rev2 is analog. More specifically, it features two digitally controlled analog oscillators per voice, plus a sub-octave on oscillator 1.

Both synths feature digital effects, but the Prophet-6 also has an analog distortion effect.

How Many Voices Does The Prophet-6 Have?

The Prophet-6 has six voices, meaning you can play up to 6 notes simultaneously.

How Many Keys Does The Prophet-6 Have?

The Prophet-6 is a four-octave keyboard, meaning it has 49 keys.

Does The Prophet Rev2 Have Presets?

While it is not listed on the company’s website specifications, the Prophet Rev2 comes with 64 built-in presets to choose from.

You can also buy separate preset packs and load them into the Rev2 which can carry up to 512 presets.