Troy Jansen
Modular
Disclosure: We may receive commissions when you click our links and make purchases. Read our full affiliate disclosure here. 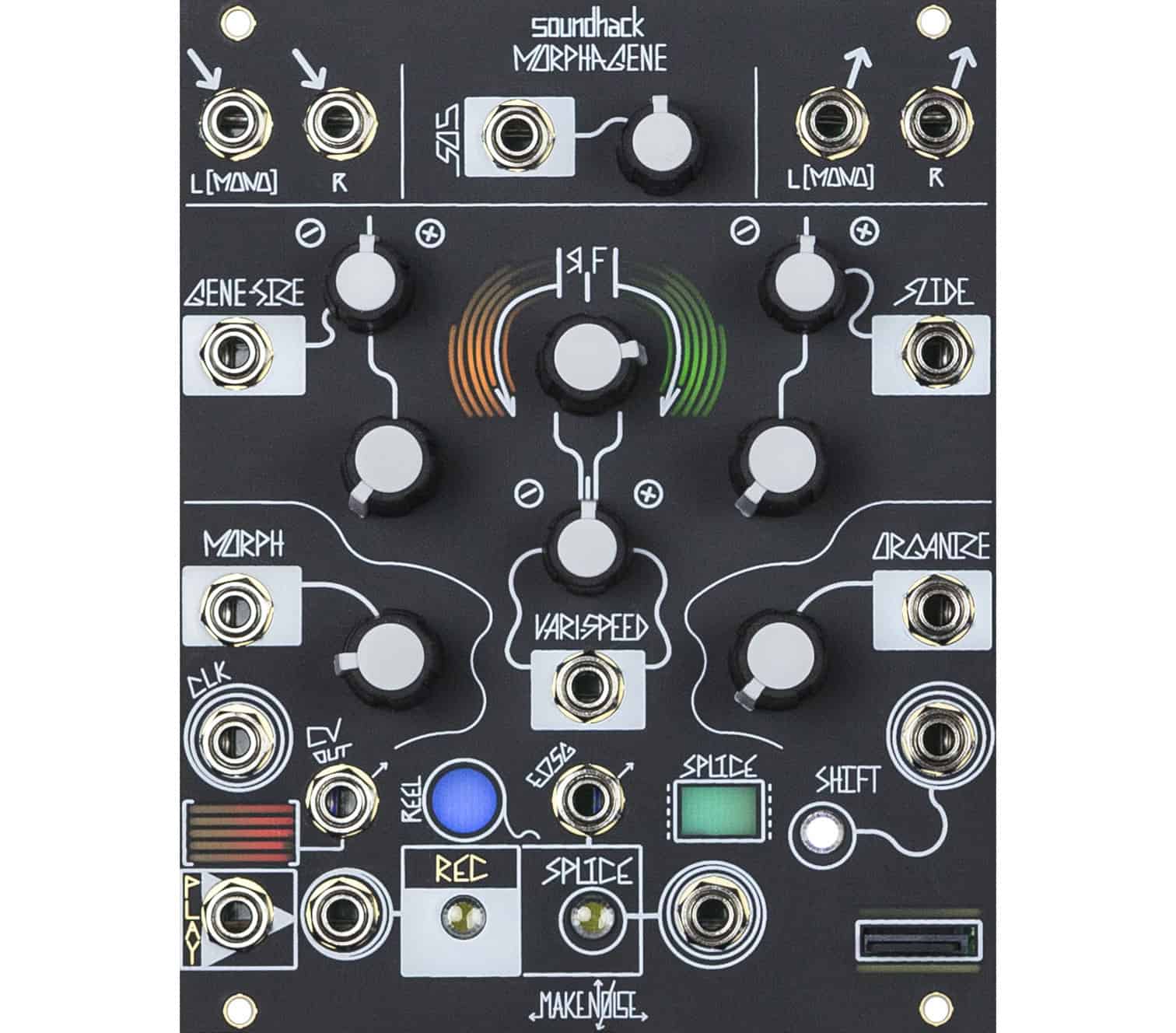 Few companies in the modular world produce as many innovative modules as Make Noise. This small company from North Carolina is responsible for many of the most popular modules in the Eurorack format such as Maths, DPO, and René, yet one of their newest offerings has proved to be one of the most groundbreaking: Morphagene.

Called a “tape and microsound” module by Make Noise themselves, Morphagene has seen widespread use since its debut in 2017. The module is even used by artists like Thom Yorke and Deadmau5, as well as popular YouTube creators like Hainbach and Andrew Huang.

If you’ve watched any demos online, Morphagene may seem like a one-trick pony with its classic slowed tape effect; but digging deeper with it allows for any manner of sound to be reshaped into many new and inspiring textures. Follow this guide to learn how Morphagene works, and how you can start making wild and beautiful sounds with it. 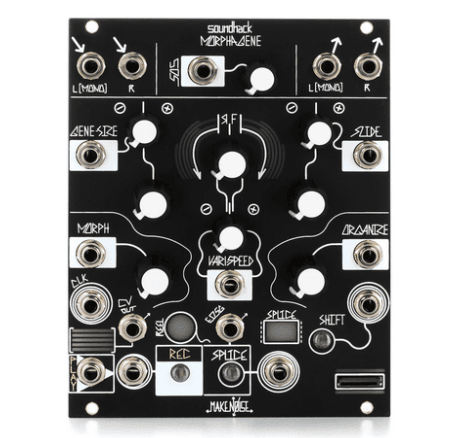 The Morphagene gives you full voltage control of all musical parameters, allowing you to essentially search between the notes and uncover the basically limitless, undiscovered sounds that exist in that sonic space.

As a “tape and microsound” machine, Morphagene works on different levels in regard to the scale and time of audio it samples or plays back. The module divides this parameter into 3 classes; reels, splices, and genes. Knowing how each of these segments of audio work is crucial to understanding the unit’s operation.

Reels are the largest sections of audio that Morgphagene works with, they can be up to 2.9 minutes long. Reels can be recorded directly into the module or prepared on a computer and uploaded with the included SD card (more on that process later).

Splices are subsections of reels. They can be the length of the whole reel or multiple subsections of it. Splices are created by pressing the splice button, which divides the reel at the point in the audio when it is pressed. Splices loop automatically, which makes Morphagene a simple and effective looper as well.

Genes are selected parts of Splices. By default, a gene takes up a whole splice, but the Gene Size knob determines how long a gene is relative to the whole splice. The Morph knob controls the playback and overlapping of genes, hence the name: Morphagene!

If all this seems a little complex, don’t worry! Morphagene is laid out in such a way that getting started is easy after you know what all of the controls can do. With some practice, these concepts become second nature when using the module.

This knob at the top of the panel controls what you hear from Morphagene. Turned fully counterclockwise, any incoming signal is heard full volume without any effect. This is useful for monitoring what is about to be recorded into a reel.

As the knob is turned clockwise you begin to hear the current reel playing back. Changes to the other parameters like vari-speed and morph can be heard when SOS is clockwise. This control also determines what is recorded when overdubbing a reel, making it very helpful for creating interesting layering.

The knob at the center of Morphagene enclosed by two eye-catching LED windows is Vari-Speed, which controls the speed and direction of playback for reels. This control is where the real magic of Morphagene comes in; being able to slow, speed up, or reverse the playback of a sound can create drastically different sounds and unlock new sonic worlds.

Altering sound with this control can result in huge pads, ambient drones, or even crazy experimental noise. The magic doesn’t stop there, however. The rest of the panel controls add more variation and extravagance to sounds.

Slide works hand-in-hand with gene size, as it controls the position in a splice that the gene begins playing. Slide does not do anything when gene size is set fully counterclockwise, as the gene is the same size as the splice and thus cannot move. Once a gene is smaller than the whole splice, it can be slid to start at different positions inside the splice.

Morph is perhaps the most drastic of the panel controls; it affects the spacing of the genes as they play back. When morph is fully counterclockwise, there is a slight pause between each loop of the gene. As the knob is turned clockwise, the genes play back closer together, eventually even overlapping.

Pushing the control even further, it begins to behave more strangely, with multiple genes playing back together, randomly panning, and even shifting octaves. This is a great control for adding chaos and variety to looping genes.

Morph can also perform synchronized time-stretching when a clock signal is patched into the clock input.

Organize selects which splice is currently being played back. Splices are color-coded and the current splice’s color is displayed on the splice window below the Organize knob. The shift button also moves playback to the next splice after the current one has finished playing.

Morphagene doesn’t have any cumbersome menus to dive through. Instead, it uses buttons and combinations to access its useful secondary functions and modes.

A handy chart for all button combinations and their functions can be found here.

Recording into Morphagene is straightforward and fast. To begin, start with an empty reel and turn the SOS knob counterclockwise to monitor the incoming audio. Hold record and press shift to auto-level Morphagene to the input signal (with this feature you can directly record line-level audio).

Once the input is leveled, simply press Record to begin, and then again to stop recording. If there is already audio in a reel and you want to add another splice, holding Record and pressing splice will start recording into a new splice that can be shifted into. Recording can also be synchronized to start and stop with other modular gear via the clock and play input.

Morphagene becomes even more powerful and versatile when you give it some clock and gate signals to process.

The clock input takes a standard Eurorack clock signal and synchronizes several aspects of Morphagene to it. Recording is synced to the clock so any sequence running from the same clock can be captured perfectly at the record input. Clock also allows the Morph knob to perform time stretching and compression to warp and re-pitch genes.

The Play input takes a gate or clock pattern and syncs it to the actual playback of splices, so Morphagene will stop playing back when your master clock is stopped, for example.

Here are a few additional helpful tips, as well as some basic patch ideas to get started with Morphagene.

Patching the EOSG, or end of splice gate output to the shift input will make Morphagene automatically shift splices when the current one has played. This is helpful for looping entire reels with different splices.

The CV out jack on Morphagene is often overlooked but is very useful. It sends out a control voltage based on the average output of the module. This can be a great modulation source for tying Morphagene’s dynamics to another module in a mix, like a filter for example.

It also works for the dry signal passing through when SOS is turned down, meaning Morphagene can be a rudimentary envelope follower.

The SOS, Gene Size, Slide, Vari-Speed, Morph, and Organize controls all have CV inputs and attenuators to add and shape modulation to the parameters. Having onboard attenuators is useful if you want to carefully limit the amount of modulation to a control.

Making Your Own Reels

Reels recorded directly into Morphagene are great, but more freedom and experimentation can be had by preparing reels in a DAW and loading them into the module via the SD card. There are just a few things to keep in mind when creating reels for Morphagene; the module only accepts 32-bit, 48000 Hz stereo .wav files.

If you don’t have a DAW, Reaper is a great option that can easily create reels for Morphagene. It is free to start using and the full license only costs $60 USD. Here is a great tutorial from Make Noise on how to prepare audio for Morphagene reels with Reaper.

Morphagene is truly a magical module; it has the rare ability to take any incoming audio and output something wildly different, yet in many cases far more beautiful.

The module is complex, but learning all of its ins and outs is immensely rewarding. Morphagene meshes well with incoming audio and patterns from all kinds of different modules, so it’s a worthwhile pickup no matter what kind of system you have.

Make Noise Morphagene retails for $529 USD and is currently available at Sweetwater.

The Morphagene gives you full voltage control of all musical parameters, allowing you to essentially search between the notes and uncover the basically limitless, undiscovered sounds that exist in that sonic space.