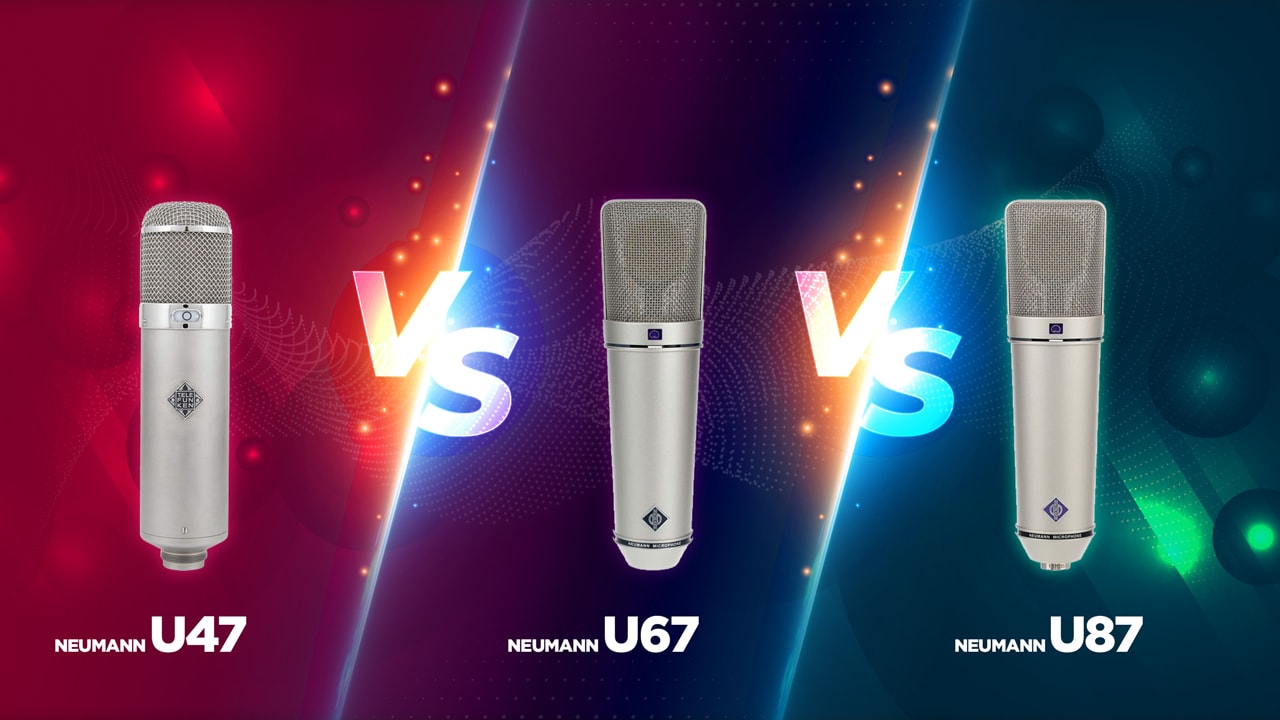 Rodrigo Sanchez·
Microphones
Disclosure: We may receive commissions when you click our links and make purchases. Read our full affiliate disclosure here.

Throughout history, Neumann has been the criterion against which all other mics are measured.

Their microphones are an integral part of the history of recorded music and they are simply the ultimate microphone company.

Established in 1928, Neumann is still one of the leading microphone creators all over the planet. Three of Neumann’s most enduring and famous microphones are the U47, U67, and U87.

Highly regarded for their rich sound, extraordinary detail, and fantastic depth, these three microphones have been used in countless top-notch recordings.

The Neumann U47, U67, and U87 are all condenser microphones. These three mics are especially capable of capturing sounds with exceptional detail and precision.

Al three of these microphones are hand-made in Germany by highly qualified professionals, and they are all legendary in their own right. In other words, they all are fantastic.

That said, there is a significant price difference between them.

The U87 is the cheapest of the three. Although there’s nothing “cheap” about a mic that costs over three thousand dollars, it does cost less than the U47 and U67.

Then again, the Neumann U67 costs double that. The U47 on the other hand, is closer to the U87 in price, albeit more expensive. Perhaps the answer to which you should get lies in the history of them.

Neumann went back to the schematics and production notes from the original U47 FET to bring you the wide dynamic range, detailed sound, and fast transient response of the original.

It would not be a stretch to say that the U 67 defined the sound of the '60s. Now the legend is back — in a meticulous reissue, handcrafted in Germany to original specifications using archived documentation.

First introduced in 1967, the Neumann U 87 Ai is the modern incarnation of a classic microphone.

A Bit Of History

For a better understanding of the close relationship of the U 47, U 67, and U 87, we need to look at their history.

This will also help us understand the close relationship between Neumann and Telefunken, as the latter has released its own versions of legendary Neumann mics.

The Telefunken VF 14 vacuum tube, on which the circuitry of the U47 was based, was discontinued in the late 50s. Given the popularity of the U47, Neumann felt the pressure to develop a successor, but with a different tube.

At the same time, rock-‘n’-roll had arrived. With vocals that were far more aggressive than the crooner style that came right before, it became apparent that the U47 was no longer a good mic for capturing voices of this new style.

However, not all aspects of the U47 were disregarded. The U47 was built around a K67 capsule, which became one of the most used capsules in history, still employed to this day.

But as history would have it, many engineers at the time considered the U 47’s sound too harsh for capturing rock singers.

This factor, along with the shortage of parts for the U 47, led Neumann to produce a new mic in the U lineage: the large diagram tube microphone U 67.

This new microphone had less emphasis in the upper midrange response, to make up for the harsher voices of rock n roll.

It is a solid-state large diaphragm condenser microphone that sported modern FET circuitry and could be powered by phantom power instead of requiring a separate power supply.

This made the U87 less expensive than the U67, and engineers everywhere loved it. The industry adored the U87.

It has remained a staple at professional studios to this very day and arguably the most sought-after studio mic.

Why? Because it can mic basically any source, and get fantastic results consistently.

Don’t forget to check out our review of the Austrian Audio OC818 here!

The Neumann U47, U67, and U87 share a few traits in common. The first is that they are all large-diaphragm condenser microphones. All three are made in Germany by a team of highly trained specialists and feature that unique Neumann craftmanship.

These three condenser microphones have their unique place in history, with the U 87 still being used extensively in professional studios.

It would not be a stretch to say that the U 67 defined the sound of the '60s. Now the legend is back — in a meticulous reissue, handcrafted in Germany to original specifications using archived documentation.

One could make an argument that the differences between these microphones are tightly connected to their time period.

As the years went by, some materials were discontinued, and this affected how microphones, in general, were designed.

Today, you can buy reissues of the U47 and U67, as well as a U87 Ai (the newer version of the U87). However, if you want an original, be prepared to shell out tens of thousands of dollars in some cases.

All of these three condenser microphones differ in maximum SPL. The Neumann U67 has the lowest maximum SPL handling at 116 dB.

On the other hand, Neumann’s U87 has a slightly higher maximum SPL handling of 117 dB. With the pad engaged, it increases to 127 dB.

Neumann went back to the schematics and production notes from the original U47 FET to bring you the wide dynamic range, detailed sound, and fast transient response of the original.

Both the Neumann U67 and U47 have a frequency response range of 40 Hz to 16 kHz. Although that range is not bad and capable of still working just fine for many sources, it is a bit more limited than what you get from a typical mic today.

Contrast that frequency range with Neumann U87’s response of 20 Hz to 20 kHz.

An extended range means that the U87 can capture both a bit more at both ends of the spectrum. In other words, higher and lower notes.

On the other hand, the U47 only features a cardioid polar pattern.

You can get a reissue U47 FET for no less than $4000. Neumann built this reissue with the same transformer and K 47 mic capsule to keep it as close as possible to the original.

Now, with the U 67, you’re going to have to spend well over seven grand.

Finally, the newer version of the U87 is the U87 Ai, which sells for over three thousand dollars.

As mentioned before, both the U47 and U67 are reissues. Some originals can still be found, but they will likely cost you the same as a downpayment on a house.

All three of these mics are truly special. The right choice for you is going to depend largely on how much you want to spend, as they differ so much in price, particularly the U67.

Although all three are fantastic, the U87 is the top choice in my book. It captures a plethora of sources beautifully, is very flexible and versatile, and is the cheapest of the three.

It is still arguably the most sought-after microphone ever. And yes, it is hard to argue with history.

First introduced in 1967, the Neumann U 87 Ai is the modern incarnation of a classic microphone.

Why are Neumann mics so good?

The Neumann brand has superb quality on its microphones, and that has been consistent for over 80 years.

Strict quality control measures and great products have made Neumann the world’s leading manufacturer of studio microphones, and the go-to choice for recording vocals.

Is Neumann U87 Ai worth it?

If you have the cash to blow, yes it is. If you want a mic that accurately and beautifully captures the source, the U 87 is a top choice. It is widely considered one of the best studio condenser mics.

Does Neumann U87 need phantom power?

Yes, it does. All the U87 microphones, from any era, are powered by 48-volt phantom power.

What is the difference between a Neumann U67 and U87?

What is Neumann U47 used for?

The U47 was the ultimate microphone for voices in the late ’50s. Nowadays, one of its most common uses is on the outside as a bass drum microphone, as it features great max SPL.