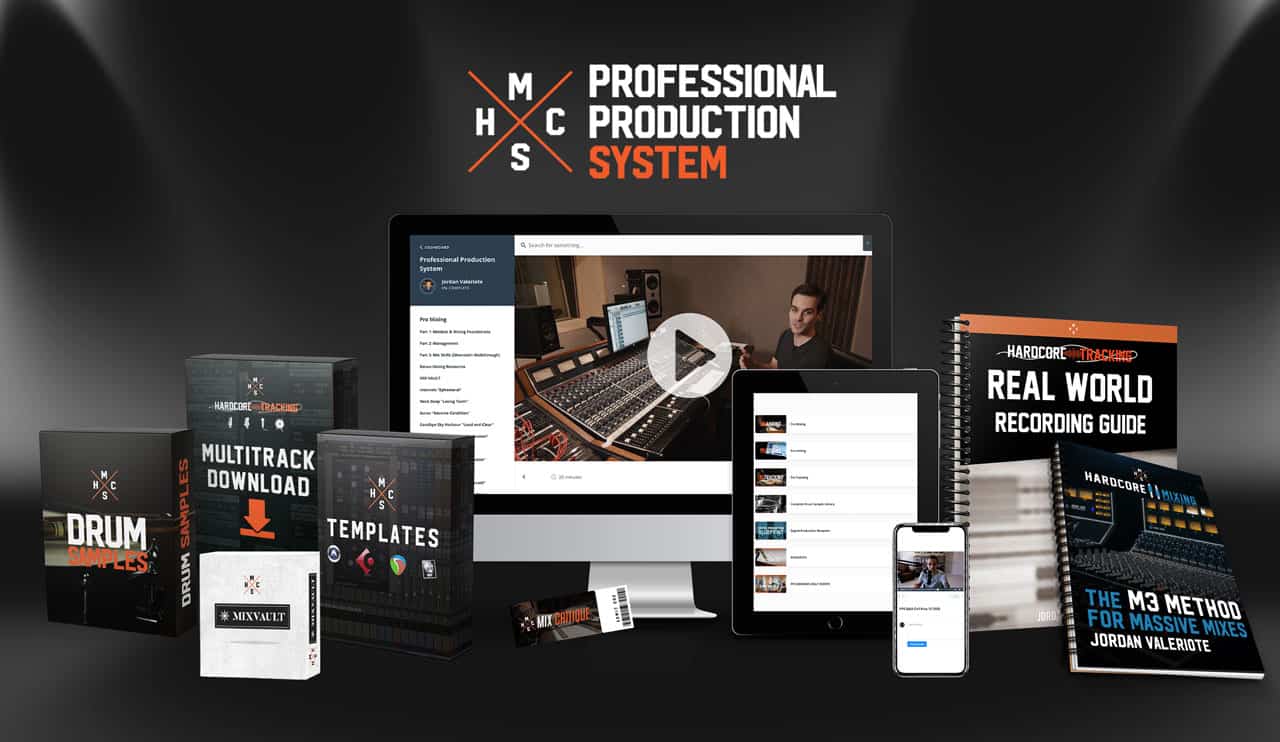 Hardcore Music Studio “Pro Production System” – Reviewed!
VERDICT
With Hardcore Music Studio, you will train your ears to listen to a track in the way a professional engineer listens to one. This unique insight into what goes on in the head of a mixing engineer and promises to explain both the how's and why's of heavy music production.
PROS
A fantastic introduction into mixing.
Jordan breaks down his go-to mixing tactics on popular metal records.
Improves your recording, editing and mixing abilities.
CONS
Aimed primarily at producers/engineers in the heavy rock music world
9
OUR SCORE
Get More Info
Hardcore Music Studio

If you have browsed around on the internet to watch mix tutorials, chances are you’ve come across Jordan Valeriote from Hardcore Music Studio.

Jordan has made countless YouTube video tutorials about subjects ranging from gain staging to creating soundscapes with delays, and so much more. Now, Jordan has created his very own in-depth course titled ‘Pro Production System‘. It covers every step a heavy rock track goes through before it gets to the mastering engineer.

Let’s dive into it and see what the course has to offer!

Jordan has made his mark on the music industry and has been the man behind the mix of some very big records in the metal genre.

He has mixed tracks for Intervals, Silverstein, and one of my favorite instrumental guitarists, Nick Johnston.

In the course Hardcore Mixing, Jordan not only shares his go-to mixing tactics but also shows you how he mixed songs that are actually released to the public.

For example, I always wondered how the drums were mixed on Nick Johnston’s Remarkably Human, so I was pleasantly surprised when I found out Jordan covered the exact song in this course.

He also dissects songs that he mixed for Silverstein, Intervals, and many more artists/bands. This makes the course more relatable, as you get to see how the song you have heard countless times was mixed. Jordan Valeriote's Hardcore Music Studio offers a unique insight into what goes on in the head of a mixing engineer and promises to explain both the how's and why's of heavy music production.

As if that wasn’t enough Jordan also covers in meticulous detail how you can get great sounds right at the source.

I was particularly happy with the fact that he didn’t just talk about mic placement, but also about guitar string gauges, amp settings, and how to get great guitar sounds in a DAW for those who cannot record an actual amplifier.

He uses the same in-depth approach when teaching about recording drums, bass, and vocals. Even though not all of us are fortunate enough to work in a pro recording studio it is really cool to see that Jordan also included tutorials on how to use outboard gear in the vocals section of the recording tutorials.

When the recording phase of a project is done, editing is next up. Editing is an often overlooked step, and in my opinion, is what separates professionals from amateurs.

When editing instruments an important point should be made: As a mixing engineer, it is your job to make the track sound as good as possible, and no matter how badly an artist would want to say that they didn’t use things like time align, or auto-tune, sometimes it is a necessity.

I really enjoyed how Jordan was able to increase the track’s quality significantly by making subtle moves.

However, he realized that not everyone gets to mix tracks that were recorded by great players, such as Porcupine Tree drummer Gavin Harrison. That’s why I was pleased to see that Jordan made three tutorial videos on drum editing ranging from a track that needed only some subtle editing to a track that was in dire need of a polish.

He also covered how to apply his drum editing tips in other DAWs, such as Reaper, Cubase, Logic, and Studio One. 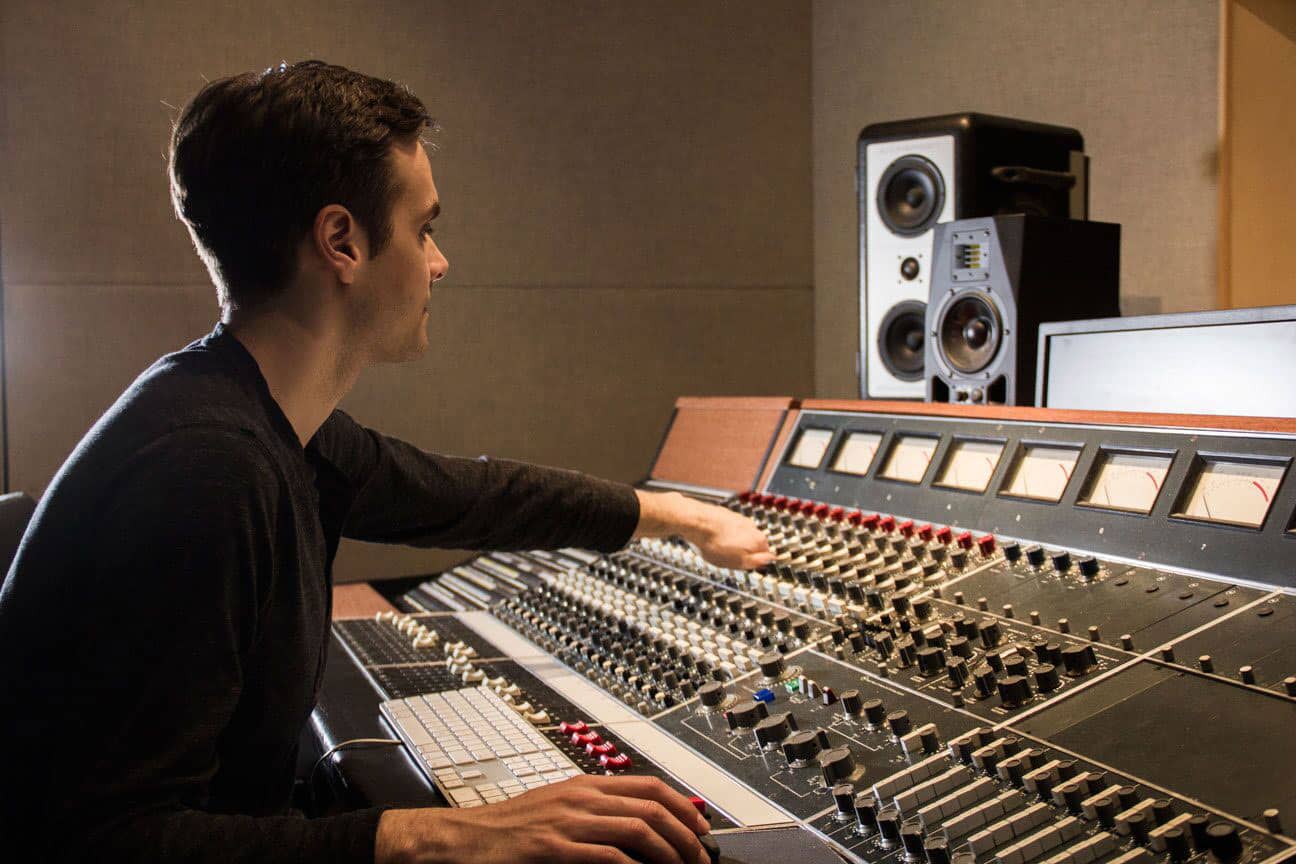 As previously mentioned, Jordan teaches how to mix by dissecting commercially released tracks he’s been involved with.

He goes into a lot of detail about his mindset. I particularly liked how he covered Remarkably Human by Nick Johnston. For example, when talking about mixing drums, he reveals how he interpreted the role of the drummer.

JamPlay Review: Worth It?

That particular song had a very cinematic vibe to it, so Jordan knew that the drums shouldn’t be as prominent as the other elements in the track. That to me is when mixing isn’t technical, but also emotional.

It’s one thing to be able to make everything sound balanced, but when you are able to facilitate the conveying of emotions by making important decisions in the mixing stage, you are on another level.

In his mixing tutorial, he goes over all the elements in a track. Usually, there are a few videos covering the drum processing, and the rest are long-format videos about vocals, bass, guitars, and if appropriate, pianos, and synths.

He also covers a subject many of us aspiring mixers view as a dark art of music production: automation.

This is one of the gems of the Professional Production System. Just like editing it’s one of the subtle things that separates amateurs from the pros.

For example in the track Remarkably Human, Jordan decides to automate the high shelf boost on the kick drum because he felt the kick wouldn’t need as much high end in the first verse. These subtle changes can really add that extra layer of professionalism to a mix.

Jordan Valeriote's Hardcore Music Studio offers a unique insight into what goes on in the head of a mixing engineer and promises to explain both the how's and why's of heavy music production.

Pro Production System is aimed primarily at producers/engineers in the heavy music world. However, I do believe everyone who wants to become more skilled at recording, editing or mixing should be able to learn something from this course.

The Professional Production System gives you a unique insight into what goes on in the head of a mixing engineer. You don’t just learn about how to set your plugin parameters. You learn why those settings matter.

With this course, you will train your ears to listen to a track in the way a professional engineer does. That is a skill that is needed in heavy music genres, as well as blues, pop, R&B, and pretty much any other genre you can think of.

Having had a glimpse at the course, I myself have learned a lot in the limited time I got to spend with it. You can now get the course yourself, so go for it!