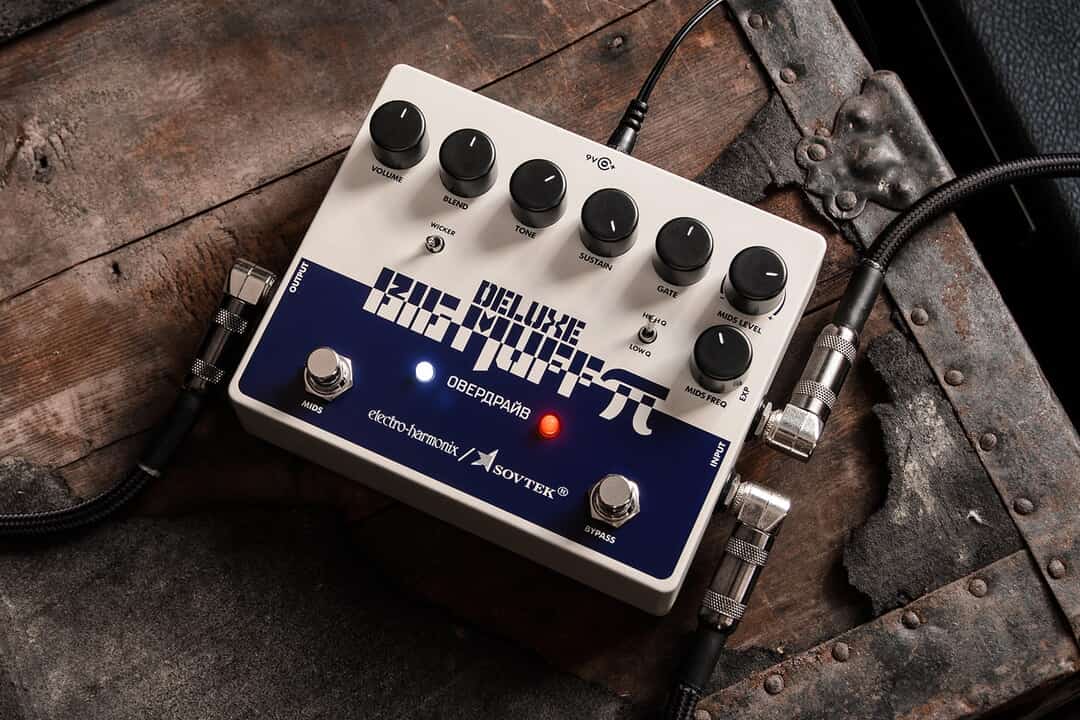 Sovtek Deluxe Big Muff Pi Review (Worth It?)
VERDICT
Combining the classic sound of the Big Muff with new, comprehensive tone-shaping controls, the Sovtek Deluxe Big Muff Pi is a brilliant fuzz pedal with reliability and durability at its core.
Sound Quality
9
Features
9
Build Quality
10
PROS
Noise gate keeps unwanted hum and buzz under control
Mids boost/cut lets you shape your sound to cut through the mix
Extremely reliable and durable
CONS
Not for those who prefer a smaller stompbox
9.3
OUR SCORE
Buy
Guitar CenterSweetwater

The Big Muff fuzz pedal has been a very popular Electro-Harmonix pedal for years, in nearly all its variations. It’s been used by many greats, including David Gilmour, Carlos Santana, and Billy Corgan .

This new pedal takes the powerful bass from the Big Muff and adds a midsection, Blend knob, and Tone pot to create a super versatile unit.

The 1991 Sovtek Big Muff “Civil War” (named for its blue and gray chassis) used the same circuit as the Big Muff from “Tall Font Green Russian” and the Green Russian Big Muff. Sovtek Deluxe Big Muff Pi: Is It Worth It?

It offers great tone and flexibility, plus the Sovtek Deluxe Big Muff Pi can be used by both guitarists and bassists. However, if you prefer a smaller stompbox for your distortion, this might not be for you.

(If that’s the case, head on over to our roundup of the 10 Best Mini Distortion Pedals (For All Budgets))

The characteristic sound of the Sovtek is combined with the powerful lows, and the crisp highs and mids without scoop; plus advanced control of the Deluxe Big Muff in a single, fully integrated pedal.

The familiar Sustain, Tone, and Volume knobs are retained, and a host of Deluxe Big Muff extras are also added for those who crave its sound manipulation abilities.

That also means that the Sovtek Deluxe Big Muff Pi does well in terms of versatility. You can dial in a warm overdriven tone for a blues solo, play classic rock and even get experimental with the tonal possibilities that this pedal offers.

Its controls and number of knobs may be a bit too much for some that value simplicity, however, the Sovtek Deluxe Big Muff Pi is a great choice if you like to experiment just a bit and try a variety of options until you get your desired tone or sound.

At about twice the size of your normal pedal, it includes the familiar Sustain, Tone, and Volume controls, along with a Blend knob to allow you to determine how much of the effect you want to add into your mix.

The Blend knob comes in handy for a variety of genres and situations and is a real standout feature.

Once you become familiar with what this pedal offers, you will quickly develop a taste for which settings to call up for different guitar parts.

For instance, when the Sustain and Blend controls are pushed to the max, a nice, thick, aggressive sound comes through, making this pedal ideal for that psychedelic, desert rock sound.

The Sovtek Deluxe Big Muff Pi will appeal to both traditionalists who want simple controls and gear heads who desire endless possibilities.

The most prominent controls are the parametric section of the MIDS EQ, (a selectable center frequency ranging from 310 Hz to 5.0 kHz), a level control with up to 10 dB of boost or cut, and a high/low Q switch that sets the resonance/bandwidth of the EQ.

The pedal provides a 1/4″ instrument input and output jack. It can be powered by the included 9V battery or a separately available power supply.

By default, it offers true-bypass circuitry to render your clean tone unaffected when the pedal is disengaged. However, you can switch the bypass circuitry into a buffered mode to preserve high-end over long cable runs.

The only drawback is that for some, there might just be too many options, especially if they’re looking for a fuzz pedal with a reliable tone. It’s easy to hear how the sound of this pedal can change so much depending on the settings, but other fuzz pedals tend to sound the same no matter what the knobs are set to.

So if it’s more of a simple, overdriven sound you seek, perhaps you might want to look at another model.

There is not much to say about the Sovtek Deluxe Big Muff Pi’s build quality except that it is stellar.

Its rugged chassis protects the internal components as well as it possibly could. You can tell this pedal is built to withstand years of abuse on the road playing gig after gig.

It weighs 1.63 pounds and its measurements are 6 x 7 x 10 inches. Naturally, there are smaller distortion and fuzz units on the market.

The Sovtek Deluxe Big Muff Pi might be a big bit for some folks that value portability over any other criteria.

However, when it comes to build quality, this pedal is built like a tank, in true Electro-Harmonix fashion.

This ensures durability and the proper functioning of the Sovtek Deluxe Big Muff Pi even under the direst of circumstances.

There’s a great reason why Electro-Harmonix continues to grow its Big Muff line.

First, these pedals have been popular and well-respected choices for guitar players around the world and from many different styles and genres.

Second, these fuzz pedals deliver some of the most iconic guitar and bass tones ever created, inspiring new generations of guitarists to use them.

Besides the familiar Sustain, Tone, and Volume controls, Electro-Harmonix also included a parametric midrange EQ section with up to 10dB of boost/cut, as well as a Wicker switch for dialing your high frequencies as you see fit.

And as if that was not enough, EHX also included a wet/dry Blend control and a noise gate to control excessive noise.

As mentioned, Electro-Harmonix pedals are built like a tank, and the Sovtek Deluxe Big Muff Pi is no exception. You can take this pedal on the road, studio, bar gigs, you name it. It is as durable and reliable as they come. What’s not to like?