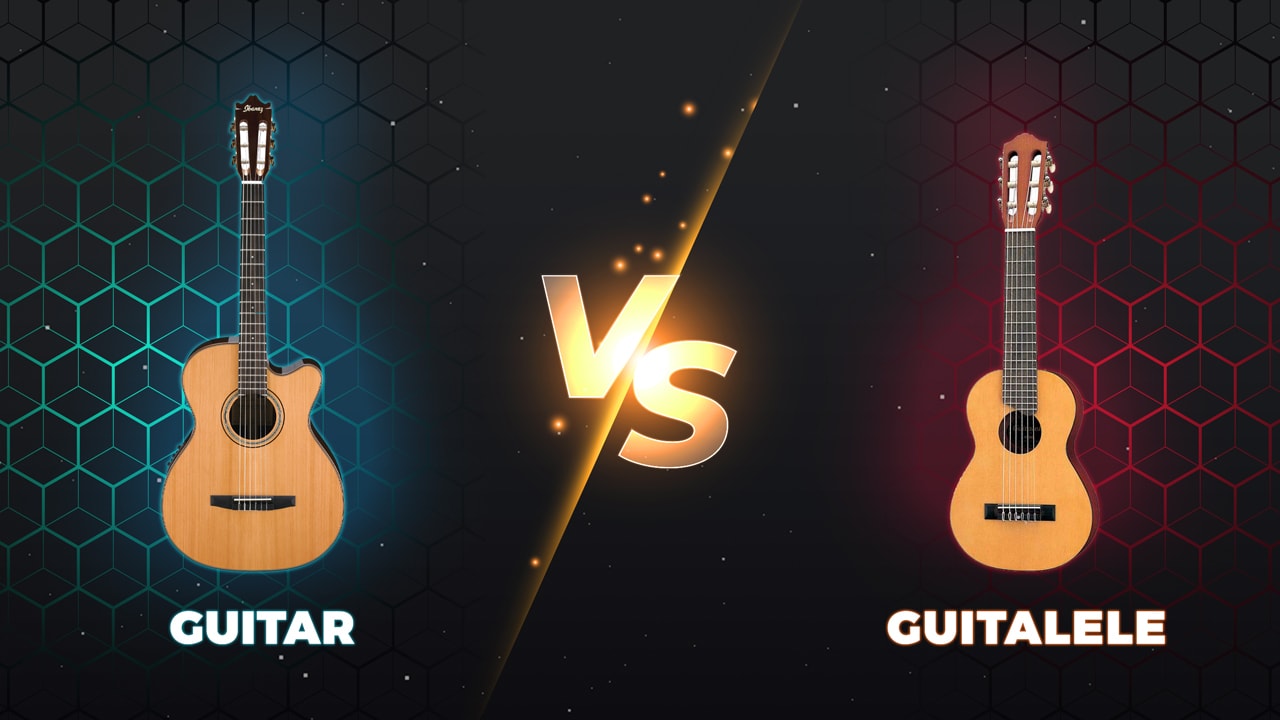 Guitalele vs Guitar (Differences & Which Is Best For You?)

Producer Hive·
Guitaleles
Disclosure: We may receive commissions when you click our links and make purchases. Read our full affiliate disclosure here.

A guitalele and a guitar share many similarities, but they are actually two different instruments.

Both are stringed instruments, with frets that produce sound by plucking or strumming the strings.

The guitalele is essentially a mid-point between the ukulele and acoustic guitar, smaller in size than an acoustic guitar, but bigger (and with more strings) than a ukulele.  This makes it great for beginners as the smaller size makes it a little easier to play and learn on.

Ok, we’re going to assume you’re reading this with no prior knowledge of musical instruments, but chances are you already have a pretty solid knowledge of what a guitar is.

A guitar is a stringed instrument that usually has 6 strings (sometimes 7 or 8) and is typically played with a plectrum but can be fingerpicked.

You could refer to this as a ‘regular’ guitar or a full-size guitar that will come in three forms.

The electric guitar has steel strings that are plucked and uses magnetic pickups to transform the sound into an electrical signal, which is then fed to an amplifier to create an audible sound. As far as classic-inspired solid body electrics go, the Heritage Standard H-150 is the real deal. Its curly maple top is supremely eye-catching, and its single-cut body will feel as familiar as the back of your hand.

Guitarists will always hotly debate which guitar, amplifier, or pedal is the best but they all use the same principle to create sound.

An acoustic guitar operates in the same way as an electric guitar apart from the fact that the strings are amplified by the body of the guitar itself.

Acoustic guitars can be fitted with a pickup that allows them to transmit the sound from the strings to an amplifier.

With a distinctly warm and intimate voice traditionally embraced by folk and blues players, the CP-60S is an ideal choice for the up-and-coming fingerstyle player.

Fingerpicking is more common on an acoustic guitar than it is on an electric guitar, but many players like to use a pick to strum open chords with.

It also uses steel strings, although these are not quite the same as the type of strings you’d use on an electric guitar.

The classical guitar is similar in many ways to an acoustic guitar but uses nylon strings and is more commonly fingerpicked. It’s very often associated with classical, flamenco, or Spanish-style music.

Using the same principle as its acoustic cousin, the classical guitar amplifies the string sound within the body of the guitar.

The classical guitar arguably shares the most characteristics with the guitalele.

The guitalele (as you can probably guess by the name) is a cross between a guitar and a ukulele.

A ukulele typically has four nylon strings and is much smaller than a guitar. A guitalele, however, has six strings (the same as a standard guitar) but these are usually made of nylon.

The Henna Dragon Mahogany Guitarlele offers an extended tonal range for guitar and ukulele addicts who want the best of both worlds.

Because of its size, a guitalele is often marketed as a travel guitar or a child’s guitar.

Whilst many characteristics are the same, there are several key things that differentiate a guitar from a guitalele.

As we mentioned, both a guitalele and a guitar have 6 strings. However, they are tuned differently.

A guitar as standard will be tuned to E-A-D-G-B-E whilst a guitalele is tuned as standard to A-D-G-C-E-A which represents the same tuning as a guitar but higher.

If you imagine placing a capo on the fifth fret of a standard guitar, this is exactly the same as the tuning used on a guitalele.

Because of this, it is possible to learn songs transposed from a normal tab, you just won’t be able to play along to the song if it’s in a key lower than E.

An easy way around this is to start using a capo and just play the song an octave higher in the ukulele’s register, I mean they’re supposed to be similar anyway.

The size of a guitalele tends to be much smaller than that of an acoustic or classical guitar, both in the body and the fretboard.

A guitalele lies somewhere between a ukulele and a guitar in terms of size, which is why it’s not uncommon for children to start learning with one.

Similarly, people with smaller hands or those who are traveling and need to conserve space will often opt for a guitalele over a regular guitar.

The neck length (or scale length) is also much shorter on a guitalele sitting at a measly 17″. Whereas a full size acoustic guitar will commonly sit around 25.5″. So for anyone with baby hands, this is a godsend!

The actual sound of a guitalele will differ from a guitar, even from a classical model with nylon strings.

Because of the smaller body, the guitalele tends to have a thinner tone (often thought of as ‘happier’) whereas a standard guitar will sound warmer, with a thicker bass resonance because of the larger body size.

Cost can be a vague factor to cover, after all, there will be guitalele’s that cost a lot more than a standard guitar and vice versa.

As a general rule, however, a guitalele tends to be cheaper than a regular guitar, particularly at the budget end of the scale. So it’s no surprise that they are a popular option for those wanting to dip their toe into playing guitar, or those whose children want to take up the instrument.

The Kala KA-GL is a great-sounding and affordable guitalele. Learning to play the guitalele is generally a little easier than learning on a full guitar.

First of all the nylon strings can be a little gentler on the hands than steel strings, which can be really helpful when starting out.

Because of the smaller size as well, the guitalele can often be easier to pick up and learn as the chord shapes are less demanding to hold thanks to the reduced scale length.

Are Guitalele Chords The Same As Guitar Chords?

Yes and no! Same shapes, but different key.

The tuning of a guitalele is different from that of a guitar, but because the guitalele is tuned with the same intervals between strings it actually means you can use the same chord shapes.

However, they won’t represent the same chord name as they would in the standard E-A-D-G-B-E tuning of a guitar.

For example, if you play a G major on the guitar, the equivalent on the guitalele would be a C major.

Imagine you are playing with a capo on the fifth fret and you can easily picture the guitalele chord equivalents.

Is A Guitalele Good For Beginners

As we’ve mentioned, new players will often opt for a guitalele because it is a bit easier to get going with.

That said, if you’re looking to jam along to songs, sometimes it can be a bit of a pain getting in key, a capo is a worthy investment here.

So, it depends on your goals. If you’re looking for an accessible way to get into playing a new instrument then a guitalele can be a great start. There’s nothing stopping you from progressing to a full-size acoustic later on!

Is A Guitalele Good For Those With Small Hands

If you do have small hands the likelihood is you’ll find the guitalele easier to play, especially if you’re just starting out.

The smaller fretboard means it’s easier to fret chord shapes and get going as a beginner.

Can I Learn Guitalele If I Already Play Guitar?

If you already play guitar then learning the guitalele will be pretty easy.

7 Best Guitaleles That Money Can Buy (All Budgets)

You may find you need to adjust to the different chord voicings (as we mentioned, a G on a conventional guitar won’t sound the same as a G on a guitalele) but as string intervals are the same, the chord shapes will still sound pleasing (it’s just they will be in a different key!).

Can I Put Steel Strings On My Guitalele?

Technically yes, but it wouldn’t be advisable!

The reason being the guitalele is designed for nylon strings, which exert much less string tension than on the neck of the guitar, and the guitar’s truss rod.

Much less than their steel counterparts. By stringing a guitalele with steel strings you risk bending, damaging, or even splitting the neck.

You may also find that the saddle itself can’t accommodate steel strings.

Can I Tune A Guitalele To Standard Guitar Tuning?

This is possible, although the nylon strings may encounter some issues holding their tuning at that tension.

We’d recommend investing in a good tuner and checking regularly to make sure that the guitar is in tune.

If I Put A Capo On My Guitar, Will It Sound Like A Guitalele?

If you put a capo on the guitar it will certainly sound a little more like a guitalele, as the pitching will be the same (assuming you use your capo on the 5th fret).

However, you need to take into account the strings you are using.

If you have a nylon-stringed guitar then it will sound a little closer to the sound of a guitalele, however, if you are using steel strings the only thing it will have in common is the pitch.

Because the scale length and the body length of the guitalele are different from that of a guitar, you will end up with a different timbre.

So whilst you could attempt to mimic the sound of a guitalele, you won’t be able to fully recreate the sound for these reasons.

How Many Frets Does A Guitalele Have?

Due to its smaller size, a guitalele will have fewer frets than that of a guitar. However, there is no ‘set’ amount of frets to be found on the fingerboard of a guitalele.

A guitalele will usually have between 14 to 20 frets, whilst a guitar could have anything from 19 to 24.

How Is A Guitalele Different To A Ukulele?

The first, and possibly largest difference is that the guitalele has 6 strings whilst the ukulele has 4. This does affect the tuning, although a ukulele as standard would be tuned to G-C-E-A, the same as the highest 4 strings on the guitalele.

However, this does differ if you are playing a baritone ukulele which is typically tuned to D-G-B-E (the same as the top 4 strings of a guitar in standard tuning).

The baritone ukulele differs in tone and has a much warmer sound than a typical ukulele which many favor.

Can I Play A Guitalele With A Guitar Pick?

You could, however, most will favor using their fingers for softer strumming.

The guitalele generally doesn’t have a pickguard, which can lead to damage if strumming hard but using a pick can create a harder tone, similar to that of a classical guitar.

That said, if you are a guitar player who plays with thick plectrums, you probably want to opt for something a bit softer for playing your guitalele.

Hopefully, this guide has given you some insight into whether a guitar or guitalele is right for you.

Both can be thought of as separate instruments in their own right but depending on whether you’re new to the guitar, you may want to opt for one over the other.

Either way, learning the guitar or guitalele can be an immensely rewarding hobby and we’re sure you’ll enjoy either of them!