It’s the big cheese. A chord that is spicy, dissonant, movable, and comes in all shapes and sizes. Seventh chords oversee the highly dissonant ‘tritone interval’. Yet, they are the all-pervading, uber-versatile, cornerstone of tension-release.

Seventh chords were not very popular in the early epoch of classic music. The seventh note destabilizes the third when they are played together. This made seventh chords distasteful for many composers, and using them was practically heresy.

Music theorists considered the seventh to be a chord tone best used for occasional embellishment. Those theorists didn’t anticipate that the seventh chord would find favor in the USA – first in classical music, then in blues, and eventually in every dang chord progression from a 21st-century jazz virtuoso.

Seventh chords can be perplexing if you are new to music theory, and there are also several types:

This is just a handful of the many flavors of seventh chords. For that reason, we’ll keep our focus narrowed on the dominant seventh chords for this post. Let’s get to the meat of it.

What Is A Seventh Chord? 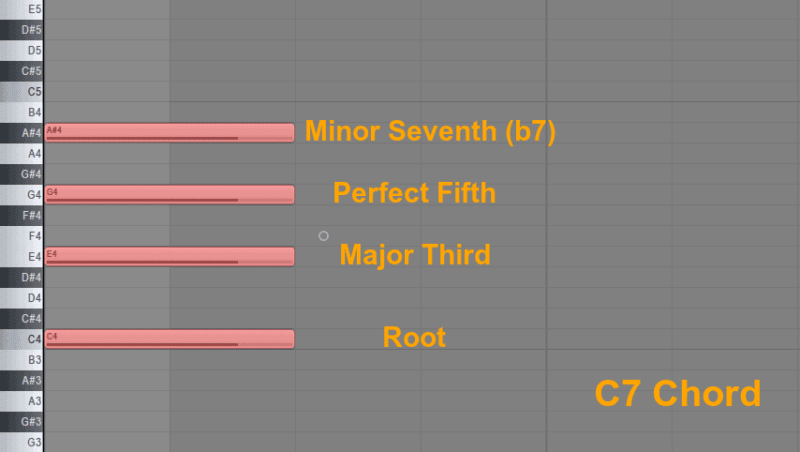 Dominant seventh chords sound restless and tense, like they really want to resolve.

In fact, a dominant seventh chord is one of the best chords you can pick to lead into a resolution. It has a harmonic pull that’s itching to go somewhere, anywhere. This edgy pull comes from the dissonant tritone, which you can use to your advantage to spice up your chord progressions.

Let’s hear a G7 chord on the piano:

What is a Tritone Interval?

In simple words, a tritone interval is the same as an augmented 4th interval. It’s any interval of three consecutive whole steps (or six half-steps). i.e. the interval between C and F# (C-D, D-E, E-F#). It’s bang in the middle of the octave, splitting it into two symmetrical and equal parts.

It’s considered to be one of the most dissonant intervals and is often avoided for this reason.

The dominant 7th chord has an inherent tritone between the 3rd and 7th degrees. For instance, B is the third of G7 and F is the 7th. The distance between B and F is three whole tones. Thus, the seventh chord has a built-in tritone that gives it a harsh resonance.

The fifth scale degree (V) of any diatonic scale is called the dominant. Why? Because the perfect fifth is the most “important” note of the scale after the tonic (root). In a major diatonic scale, the seventh chord formed by the 5th has a naturally occurring flat seventh.

That’s why we say it “appears on the 5th degree”.

For example, G is the fifth or dominant degree of C major (CDEFGABC). The naturally occurring seventh chord of the fifth degree is a dominant seventh. Confused? Let’s rewrite the C major scale starting with G:

How to Resolve Seventh Chords?

Dominant seventh chords like to go to the tonic chord (G7 to C). You can also understand this using the circle of fifths.

For more info on the circle of fifths, check out Circle Of Fifths Explained Simply (& How To Use It!).

How to Use Seventh Chords?

Blues musicians, whether up-tempo or downtrodden, love to use seventh chords. In blues, the V7 chord qualifies as a ‘turnaround’.  It indicates that a 12-bar progression is over by creating a yearning for the I-chord i.e. to start again from the top.

Additionally, there are a gazillion 12-bar blues tunes that solely use seventh chords. It is a stylistic element that defines the genre. A 12-bar blues song in the key of G can look like this:

Throw in some foot stomps, slide licks, and bourbon (optional). If you throw some chord variations/substitutions and Bird changes (a series of secondary dominants), you’ll be venturing into bebop and jazz-blues territory.

Funk relies more on rhythm than chords, but funk songs often employ the seventh chords, usually with extended versions such as the 11, 7+9, and 13.

You can’t listen to a James Brown album without bumping into a dominant seventh and dominant ninth chord. Flashlight (Parliament) is another killer example that uses an I-7 and IV-7 for most of the song.

Spice up your songwriting:

You can hear the seventh chords in non-blues songs such as One Note Samba (Stacey Kent), Can’t Buy Me Love (The Beatles), Heartbreak Hotel (Elvis), and Sitting, Waiting, Wishing (Jack Johnson). In Hey Jude, the Beatles use a V7 chord over ‘then you begin to make it better’ to lead us into the chorus. The Rolling Stones used it to a similar effect in (I Can’t Get No) Satisfaction.

What Is A Bar In Music? (Explained Simply)

Cee Lo Green’s Forget You is a stellar example of secondary dominants. Yesterday by The Beatles, Bohemian Rhapsody by Queen, Don’t Know Why by Norah Jones are other songs that rely heavily on dominant and secondary dominant chords.

Secondary dominants are commonly used in jazz, blues, and classic music to add tension. Instead of playing the dominant on the fifth of the scale, you can play any diatonic chord as a seventh to change its tonality.

In C major, if you want to go from C (I) to Am (iii), you can use the E7 chord. The E7 chord is the dominant (V) chord of Am. E7 isn’t a part of the chord harmony of C major. You would normally play an Em. However, E7 can be used as a secondary dominant for tension-release.

The tension is added by using non-diatonic notes in your chord progressions. You’ll also notice that musicians and composers use secondary dominants as a way to usher the chord progression into a new key. However, we won’t venture there as it’s a vast subject.

For now, let’s hear the difference between C-Em-Am-C and C-E7-Am-C.

On the other hand, a G7♭5 has a lowered fifth. For example, the fifth of a G7 is D. If you lower the fifth, you get a D♭. The resulting chord is G7♭5. D flat is a semitone below the second degree of the C major (tonic). These chords are similar to the augmented sixth chord, and they have the color of the Phrygian mode.

If you don’t know what that entails, take a look at my post on augmented chords (and how to use them).

In the key of C, we can play the following chords instead of the seventh (V7) chord in a V-I situation:

These chords-subs are not interchangeable without paying attention to the context. This is just a handy list of possibilities – don’t force them into existing chord substitutions as they might clash with the vocal melody. Instead, use them as a point of departure to explore ideas.

Seventh chords are extremely useful for creating tension that leads to a satisfying resolution in the next chord. There’s more to seventh chords than one post can accommodate – secondary dominants, tritone substitution, altered dominants, the list goes on.

That said, don’t just throw in a seventh on top of the triad because you can. A triad has a harmonic function, and adding the seventh may not alter that, but it will still change the mood. I’ve covered the basics and the classic uses of the seventh chord.

It’s a great way to start using it as a “tension-release workhorse” in your playing or songwriting. The more you experiment with it, the better you will hear it.

Now that you’ve got a taste for dominant seventh chords, you can move onto diminished chords in the next article How To Use Diminished Chords (To Add Tension & Color).