How To Use Chord Inversions (+Free MIDI Pack) What if I were to tell you that the quickest, most effective way to make your music sound professional can’t be found in a plugin bundle or a software instrument?

Not only that, but it’s totally free and probably doesn’t even require you to make any radical changes to the MIDI notes you already have on the piano roll.

In this article, we’ll explore the secret to writing smooth chord progressions: inversions. We will also examine some strong examples and throw in MIDI files for every example we offer along with some bonus files so that you can dive right into working with chord inversions in your own music.

To Invert Or Not To Invert

What Is An Inversion?

If you’ve arrived at this article ready to turn chords upside down, then chances are you already know how to build them upside up, but it won’t hurt to include a little bit of revision anyway. 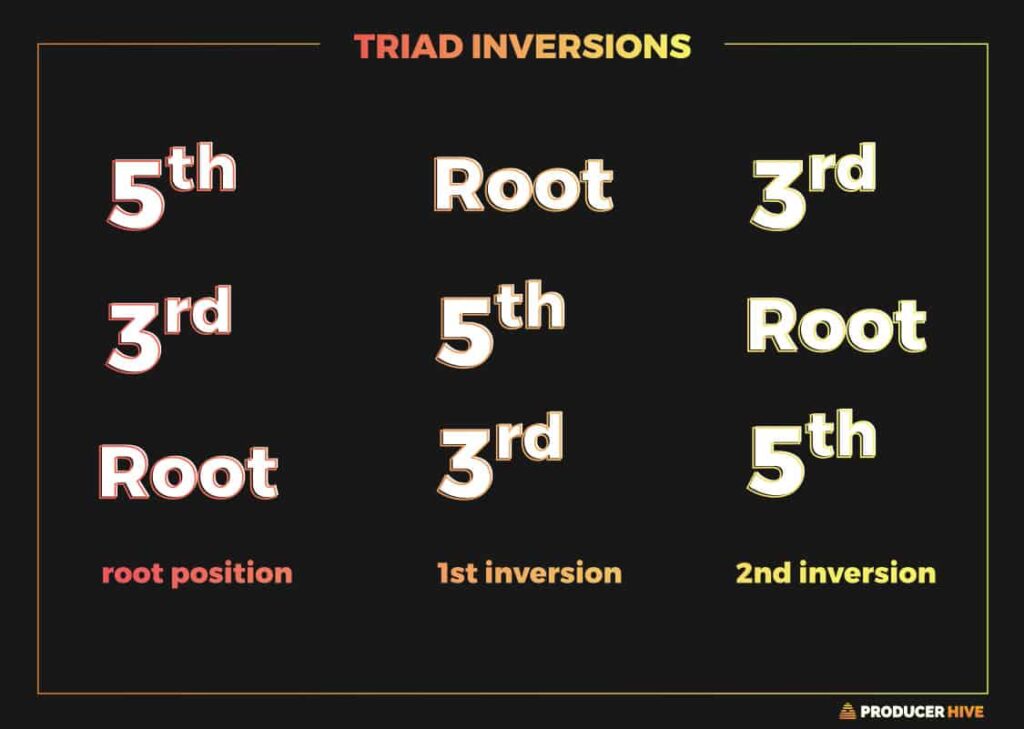 Chords are named after their root note (the note above which thirds are stacked to build the chord) and classified further by their quality (major, minor, augmented, or diminished in the case of triads), the number of distinct pitches they contain, and, if applicable, their inversion.

Seventh chords, by virtue of having a fourth chord tone, are written in third inversion when the chordal seventh is in the bass.

In the case of seventh chords, there are a few more numbers thrown in for the sake of specificity. 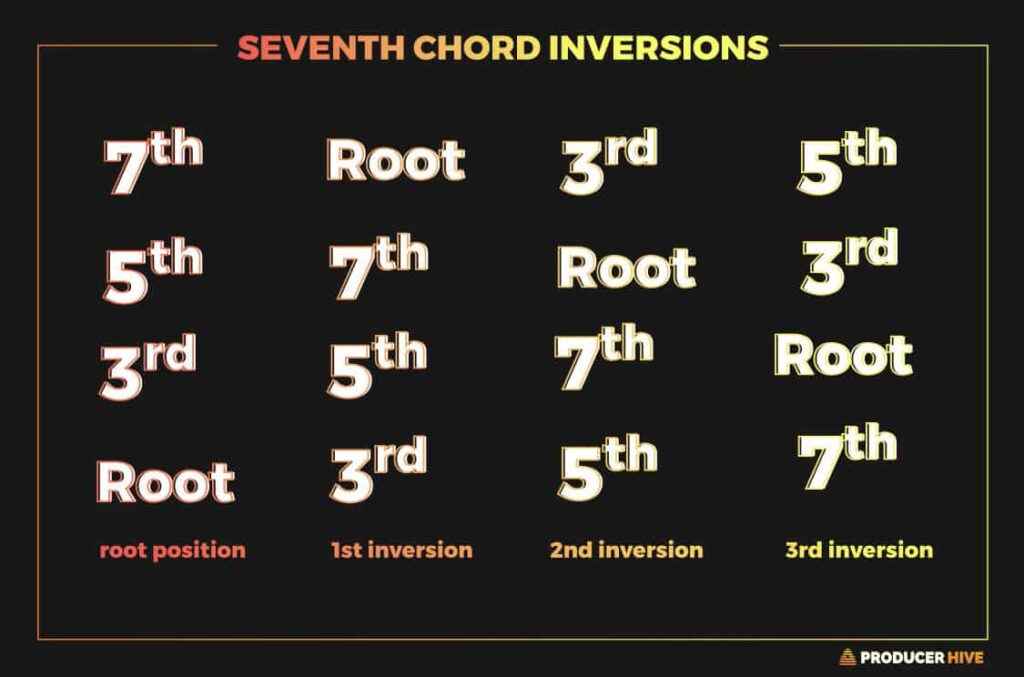 The Root Of The Problem

Now that we have explored what a chord inversion is, what is the point of inverting chords in the first place? The answer has a lot to do with voice leading.

Voice leading describes the movements of individual notes within a chord progression. Writing harmonies with voice leading in mind requires us to think of chords less as discrete entities and more as temporary amalgamations of pitches that came from somewhere and are going somewhere else.

This lens allows us to build additional journeys and personalities into each harmonic sequence, whereas the exclusive use of root position chords prevents us from doing so. The personalities that might have been, the stories hidden in the relationships between chords, are a missed opportunity.

How To Use Chord Inversions

The opportunity we have missed in spelling the chords this way is in creating three separate and independent voices within the chords.

We have movement from each chord to the next, but since each chord tone within each triad moves in the same direction by roughly the same amount, there is no sense of independence among the voices.

Giving this dull chord progression a little more character is as simple as finding the hidden lines within the chords, displacing chord tones by an octave wherever necessary to complete those lines, and ensuring that the voices move independently of one another.

Look For The Lines

With just a quick look at the spellings of the four chords, it becomes clear that there are shared pitches, as well as pitches located just one step (either a whole-step or a half-step) apart. The process of inverting chords allows us to connect these shared pitches, also known as common tones, and the pitches with just a step between them. If we were to think of these chords in root position, the C in our C Major chord would move to G in our G Major chord.

When we allow ourselves the freedom to invert chords, though, we can look at our options within the G chord. Out of G, B, and D, the B is the closest neighbor to C, so let’s go with that move for now. The A minor and F Major chords both feature a C, which means that our line can take advantage of common tones in the last two chords.

We can repeat this process with the E in the C E G of our C Major triad. E leads nicely to D, then back to the E shared by a minor and C Major, and finally to the F in the F Major triad. Finally, if we build a line starting at G, we can hold the G common between our C and G triads. The G would then move up to the neighboring A in the A minor chord and stay there as we proceed to F Major, as the A is held in common between the A minor and F Major triads.

In developing these three lines, we have developed a sort of lattice-structure with our chord progression. We have the vertical depiction of our chords we started with – the four stacks of pitches that make up C, G, Am, and F – as well as three separate journeys for three individual voices.

In order for our work in finding lines to mean anything, we need to be able to move pitches around, or displace them. This is made possible by the principle of octave equivalence, which suggests that two pitches separated by one or more octaves are functionally equivalent in terms of pitch class. This allows us to move C3 up to C4 in our C Major triad without any fear of changing the quality of the chord. (For more on tuning systems and why octaves are tuned perfectly, check out my article on the 432 Hz vs. 440 Hz debate.)

Our second image displaces the top line of our previous progression by an octave so that it becomes our bottom line, with the resulting chord progression being C – G4 – Am6 – F4.

Finally, our third image depicts voice leading that would not be acceptable in a traditional counterpoint setting because of parallel fifths between the G and am chords. It is also our most boring bass line out of the three alternatives, but for the sake of consistency and thoroughness, we might as well have a look at it. This final chord progression is C4 – G – Am – F6.

Parallel motion is the least independent relationship voices can have with one another. Here are those pesky parallel fifths I mentioned indicated with the parallel arrows.

A slightly more independent relationship is similar motion, in which two pitches move in the same direction by different intervals. In the image below, C proceeds down to B, which is a half-step away, whereas E moves to D, a whole-step down. This is a very slight difference, but an example of similar motion as opposed to parallel motion nonetheless, which demonstrates a greater degree of independence between the voices.

The outer voices of this chord progression open with what is known as oblique motion, which involves maintaining a common tone in one voice and a movement either up or down in another voice. When we use chord inversions we can maintain more common tones, which makes it possible for us to build more oblique motion into our progressions. This relationship indicates a greater level of independence between voices than the prior two options, but is not yet the gold standard for independence in voices.

Our final relationship between voices is referred to as contrary motion, and it is particularly satisfying to hear because of the extent to which it indicates independent voices. The progression we have been using does not feature any contrary motion, so I have added a new lowest note to each chord in order to build a strong bassline moving in contrary motion to the top voice. With the new bassline added below, the outer voices move in contrary, or opposite, directions.

An interesting thing to note about basslines is that the smoothest line will not always make the best bassline. With the internal voices of chords, smoother is almost always better, but the bassline, as an outer voice, stands out more and can be designed with larger intervals, also known as leaps, intentionally and stylistically.

In this case, there are no rules or even best practices, just different approaches that will yield different sounds. For this reason, the bassline, like a top melody, should fit with the chords, but also have a sort of independent identity. That said, the lowest note, as the bass note, is part of naming the chord, so the new chord progression that results from adding a new lowest note to each chord is C – G4 – Am6 – F6.

The free MIDI pack we’re throwing in with this article is loaded with files that you can use to understand progressions.

We have taken a wide assortment of chord progressions in both major and minor keys and written the chords out using smooth voice leading with the help of chord inversions.

We recommend using these as rough tools at the early stages of crafting chord progressions. Much like the examples taken from the article, they are all built in the key area of C (or A minor in the case of the minor key area chord progressions), but they are easy to transpose into other keys.

We would love to hear how you use these, so feel free to share your finished work in the Producer Hive Community on Facebook, or tag us on Instagram!