Troy Jansen
ModularBuyer Guides
Disclosure: We may receive commissions when you click our links and make purchases. Read our full affiliate disclosure here. 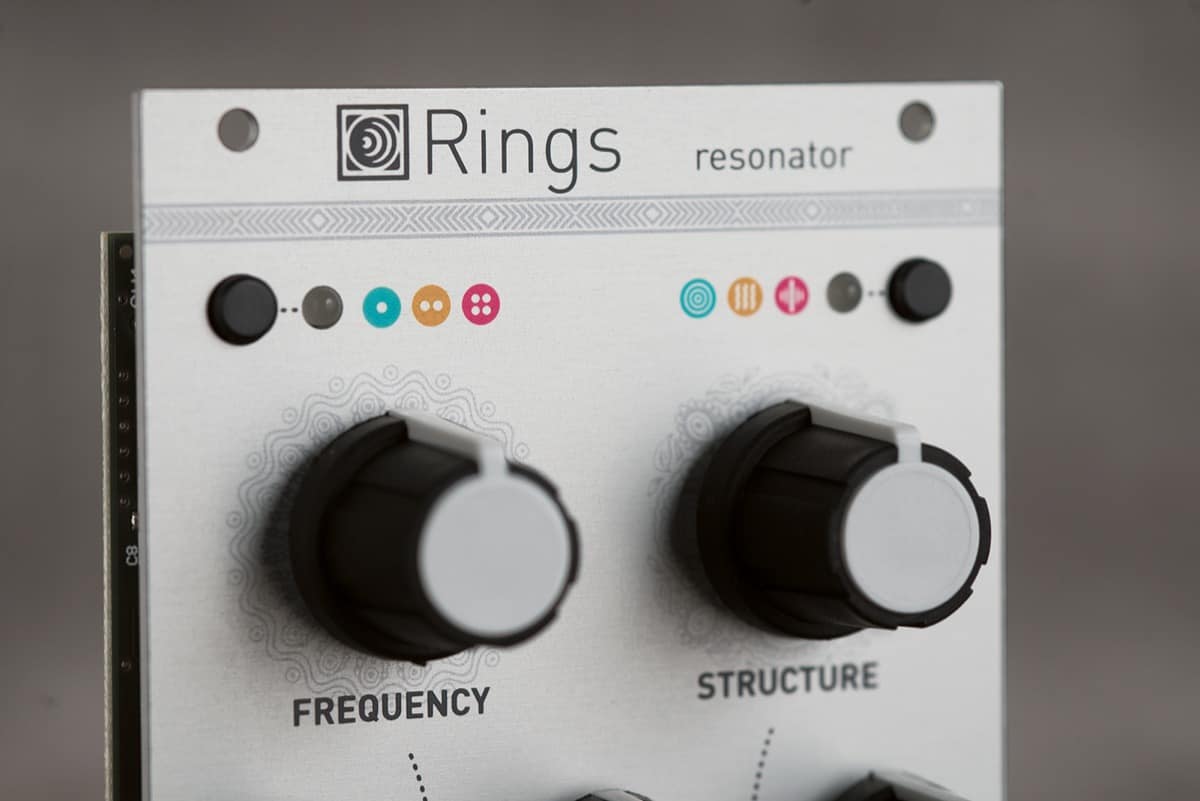 While there are many modules in the Eurorack world, few have the honor of sounding both unique and familiar. Despite being so popular, Mutable Instruments’ Rings manages to evade predictability.

It has become ubiquitous in the world of ambient modular, with its charming plucks and chirps adorning many recent ambient tracks. However, Rings can do a lot more to break out of that specific mold. The module has a plethora of other uses thanks to its hidden modes, including chords and even FM synthesis. We’ll cover these in detail later on.

The Module is described as a “Modal Resonator” by Mutable Instruments, meaning that is a physical modeling sound source for your Eurorack system. Rings digitally emulates real instruments that are bowed, plucked, picked, or even blown.

If the word “digital” scares you, don’t worry as Rings has plenty of warmth and character. This module blends smoothly into any Eurorack setup. 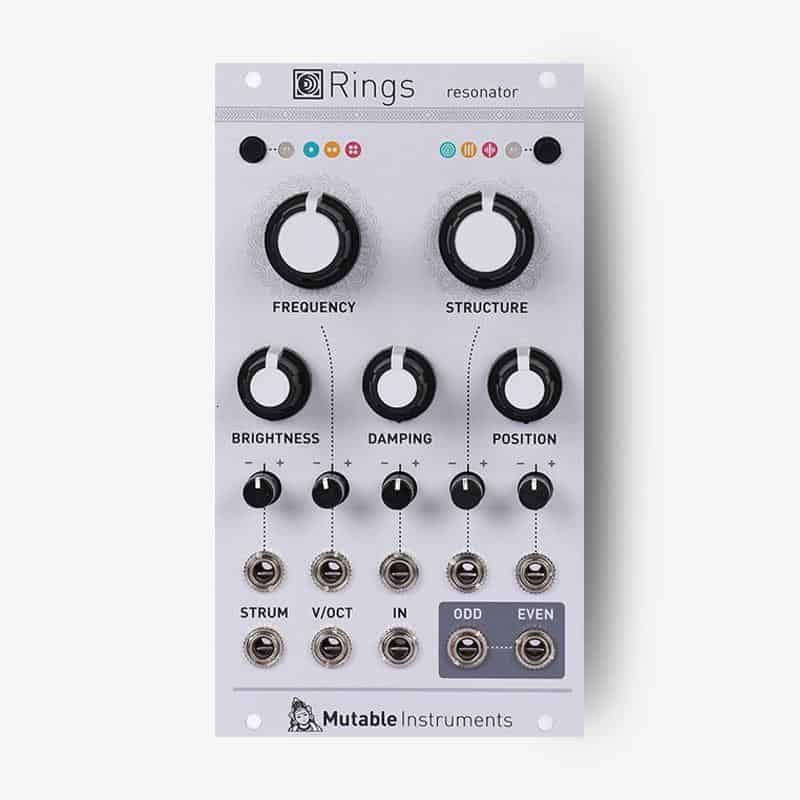 A Form Factor For Any Case

Like many of Mutable’s modules, Rings is open source, meaning there are lots of options or clones to choose from in terms of size and even color if aesthetics are important to your case.

Options range from the very compact Nano Rings (8hp) to the Rangoon (12hp) which sports an updated control layout with faders. CalSynth and After Later Audio are great brands to buy from if you are interested in a clone.

Regardless of what version of Rings you get, the general operation and sounds will be nearly identical. 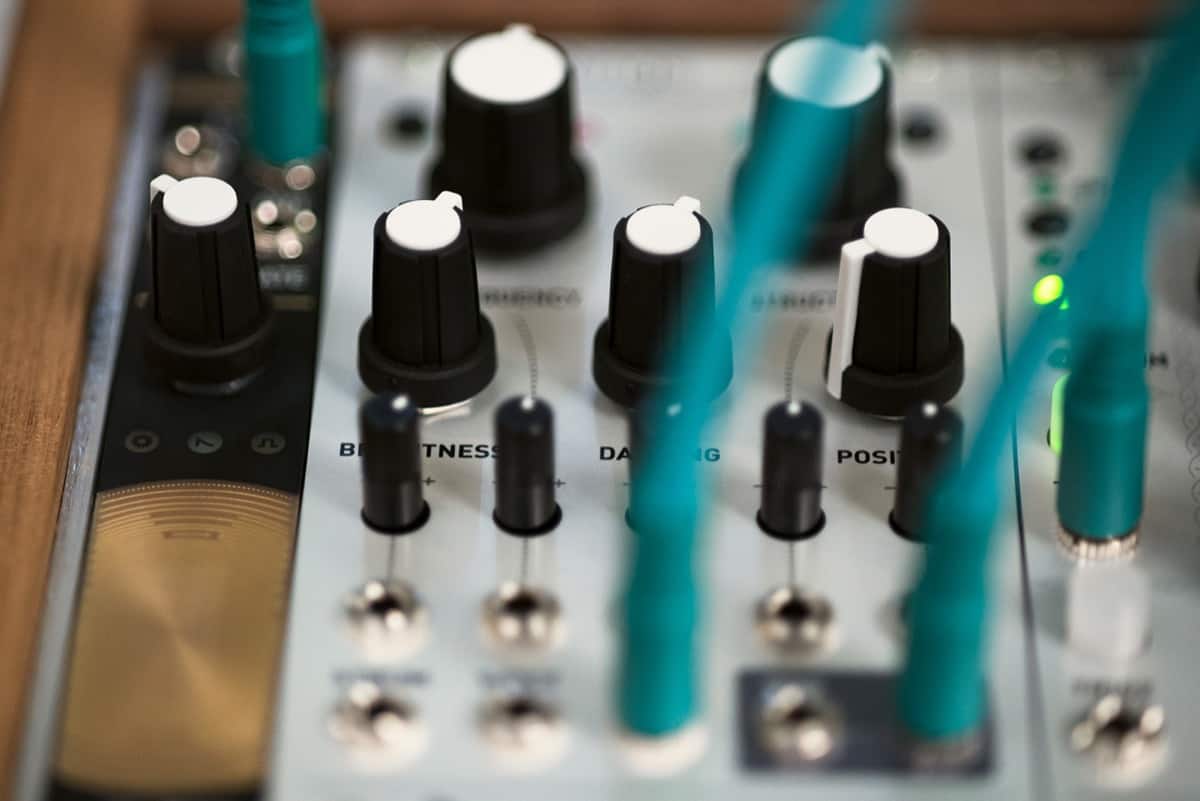 Rings has three main resonator modes that all sound unique and charismatic. To access the different modes on the module press the mode button on the top right of the unit. The mode LED will cycle through green, yellow and red, indicating the currently active mode.

The modes are as follows:

Rings’ modal resonator works by digitally modeling various physical objects, each with its own unique acoustic properties. Think strings, drums, and membranes. This mode can be great for short percussive sounds or rich sustained drones.

This mode simulates sympathetic strings like the ones found on instruments like the sitar. The digital strings can be played on their own or they can add rich harmonics to an incoming signal from the IN jack on the panel.

The red mode uses the popular technique of Karplus-Strong synthesis, which can be handy for plucks and classic synth string sounds. Rings adds some extra flavor to this technique with a unique delay component that can quickly get very harsh and industrial if that’s more your speed.

Now that we understand Rings’ Basic modes, let’s look at the controls on the panel. Thankfully most of the parameters have the same effect for each of the three modes (the hidden modes are another story, but more on that later).

Switching between the modes is relatively seamless.

Rings has five main knobs used to shape its sound and output. The panel is laid out rather intuitively and related controls are conveniently grouped together. All of the parameters are closely tied to one another, so making small changes to each one can drastically restructure the sound.

The parameters are also one knob per function, so what you see is what you get and sound-shaping feels very natural and intuitive on Rings.

Each of the main controls has a dedicated CV In socket and attenuators so you can precisely control the amount of modulation going to each parameter. Note that some Nano Rings modules may not have attenuators due to their space-saving design, so be sure to look for a 12 or 14hp Rings if these features are important to you.

If you don’t know what CV is or want to learn more about modular synthesizers, check out our beginner’s guide here.

The frequency knob is probably the most straightforward, it controls the tuning of the module.

This control is quantized to semitones for quick and easy tuning.

The harmonic structure controls the relationship between the fundamental frequency of the sound and its higher harmonics. It works slightly differently in each mode.

Brightness is a combination of lowpass and dampening filters. When fully counterclockwise the filter is closed and turning it clockwise opens it and gradually adds harmonics to the sound. This is great for taming and dialing in some of the harsher and more complex sounds Rings can make.

Dampening controls the decay of the sound, think of it as a simple envelope.

Thanks to this parameter Rings does not need a separate envelope or VCA in order to get the most out of it.

This knob controls where the digital resonator is “struck”. It mostly affects the distribution of harmonics and shapes the overall tone of the sound. At 12 o’clock the harmonics are most minimal, and turning the knob in either direction will add harmonics in interesting ways.

Besides the CV inputs for the parameters, Rings has three main inputs: strum, volts per octave, and IN.

Strum is the gate input for the module. In polyphonic mode receiving a gate tells the module to play a new note while the previous one rings out. Volts per octave or v/oct tell the module what pitch to play.

V/oct also has a transient detector, so a note will play every time this input receives a voltage, even without a gate at the strum input.

Finally, the ambiguous “In” input is actually one of Rings’ key features. You can patch any audio into this jack and Rings becomes an effect module as it runs the incoming signal through its resonators.

This feature is great for unlocking even more sonic possibilities from the module. For example, plugging a white noise source into the input can make Rings sound like a wind instrument. Try patching all kinds of audio into Rings to discover interesting and complex new sounds!

Rings has two outputs, but they are not true stereo. Instead, harmonics from the resonator are split between the “odd” and “even” outputs. The distribution of the outputs varies by mode, based on how each resonator creates its harmonics.

Rings sums these outputs when only one jack is plugged in, so it can run in mono as well. But having two outputs means you can run Rings into a stereo effects module and get creative with parallel processing.

Similar to the three resonator modes, Rings has three modes of polyphony, giving it the ability to play multiple notes at once. These mods are also represented with a green, yellow, or red LED; and are controlled via the button on the upper left of the module.

Green mode is monophonic, so Rings will only play one note at a time, and each new note will cut off the previous note’s tail. Yellow is duophonic, so two notes can be played consecutively with no interruptions.

Finally, red is quadraphonic, allowing for four notes to be ringing at once. Note that with lots of harmonics, the quadrophonic mode can get very noisy, so consider using the brightness and dampening controls to tame it if that’s not what you want.

Rings features three hidden modes accessed by long-pressing the mode button for three seconds. The LED will begin to flash to indicate you’re in a new mode.

Flashing green is the FM synthesis voice. This mode can be harsher and grittier than Ring’s usual voices and is great for heavier electronic styles. The structure knob controls the FM frequency ratio, brightness changes the FM index, and position adds feedback.

When the LED flashes yellow it’s in “chord mode”. The Structure knob controls which western chord is selected. To the right chords are minor, to the left they are major, and in the middle, they are fifths or power chords.

The flashing red mode is similar to the Karplus-Strong mode, but with a nice reverb tied to the dampening control.

Finally, there is one more trick up this module’s sleeve that sees even less use due to its secrecy. It is known as disastrous peace, and can only be accessed by putting the knobs on the panel into a specific combination:

Next, turn the attenuators as follows from right to left: CCW, CW, CCW, CW, CCW. Now by long pressing either button, you have access to this enhanced and strange chord mode. It even features some bonus effects accessed via the mode button. It’s a long way to go to get there, but I’m sure you will have fun with it.

Rings is a powerhouse of a module and it’s clear that it is so popular for a reason. Utilizing its hidden modes and other features lets you take its capabilities far beyond ambient and mediative soundscapes; although it can definitely nail those sounds as well.

The wide availability of form factors means you can fit it in any sized Eurorack system. Any synthesist looking for an interesting new sound source should consider picking up Rings.

Mutable Instruments Rings retails for $359, but smaller variants and clones can be had for $160-$200.

(Make sure you also check out our review of Mutable Instruments Clouds, which is another incredibly popular but diverse module from MI.)