An ornament is generally something decorative – a non-essential, perhaps even frivolous element meant to liven up whatever it is attached to.

In music this definition holds true, as musical ornaments are one or a few notes that embellish a melody but are not, themselves, essential to the melody.

Ornaments come and go with changes in musical fashion, and vary from one musical tradition to another, but the practice of using ornamentation is undeniably inscribed in the historical practices of composition and improvisation.

In this article, we will explore a few of the most common musical ornaments from western art music theory, and show you how you can use them in your own music today. Let’s dive in!

Many of the ornaments we will examine would have been scattered throughout a performance of French Baroque Opera in Louis XIV’s palace at Versailles, but are far less common in the present day.

For that reason, incorporating a lot of these ornaments into a work of music will call up associations with older music of the western art music canon.

That said, ornamentation, like all things in music, can have a really nice effect when used judiciously, so let’s have a look now at some of the most recognizable ornaments that music theory has to offer.

The grace note is an embellishment but it is about as simple as it gets: a small note precedes the main note. There is a bit more to it than meets the eye, however, because the little grace note can be played either as an appoggiatura or an acciaccatura.

The difference between these terms is in which note gets the most emphasis between the grace note and the main note.

The appoggiatura is typically distinguished from the acciaccatura with an oblique slash through the grace note, although a strong understanding of historical musical conventions will also lead a performer to an understanding of the preferred way to play ornaments.

Grace notes are imprecise ornaments, in that they involve the addition of a note to a pre-existing note without necessarily adding any additional time.

What that means is that the musician has a choice to make in determining how much of the duration of the main note will be handed over to the grace note. Depending on the time period in which the piece originates and the conventions of the composer, this choice might have certain bounds.

It is also a common practice to borrow some time from before the beat in order to fit both the grace note and the main note into the time allotted.

Below are examples of how the two types of grace notes look in written sheet music as well as interpretations of how they would appear in a MIDI roll. 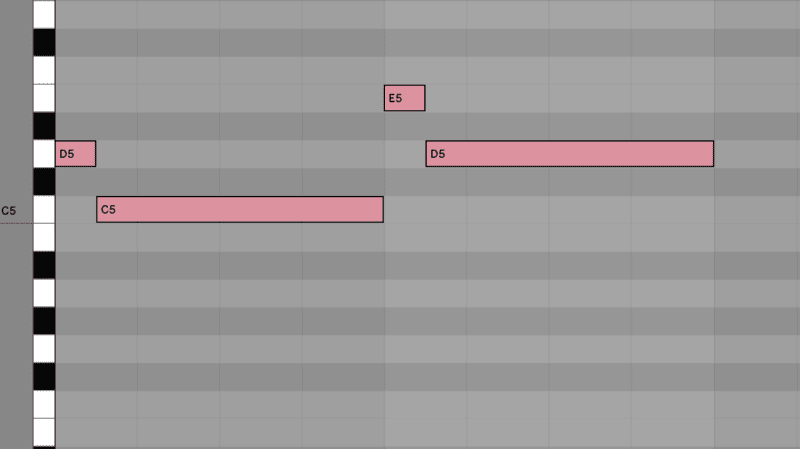 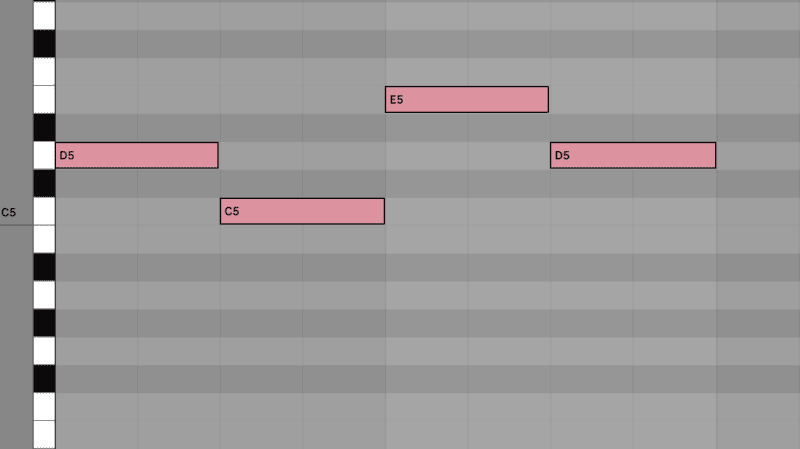 The turn is slightly more complicated, but not by much. The turn is recognizable for its S shape that has been turned on its side.

The order of these notes is prescribed by the turn, but the rhythm of the notes is contextual, in that it is up to the stylistic preferences of the time and place in which the music originates as well as the taste of the performer and how they prefer to play ornaments.

Similarly, the upper and lower neighbors may be diatonic or chromatically altered, depending on the context.

When a turn is placed between two notes as opposed to above a note, it is placed at the end of the preceding note, creating a sort of lead-in to the following note.

In this way, you might see an inverted turn written as an upside-down version of the line that represents the turn, or you may see it written the way it is below, with a single line bisecting the line representing the turn.

Other than that it is similarly beholden to the context in order to determine the rhythm and whether the neighbors are diatonic or chromatically altered.

Below are examples of how the two types of turns look in written sheet music as well as interpretations of how they would appear in a MIDI roll. 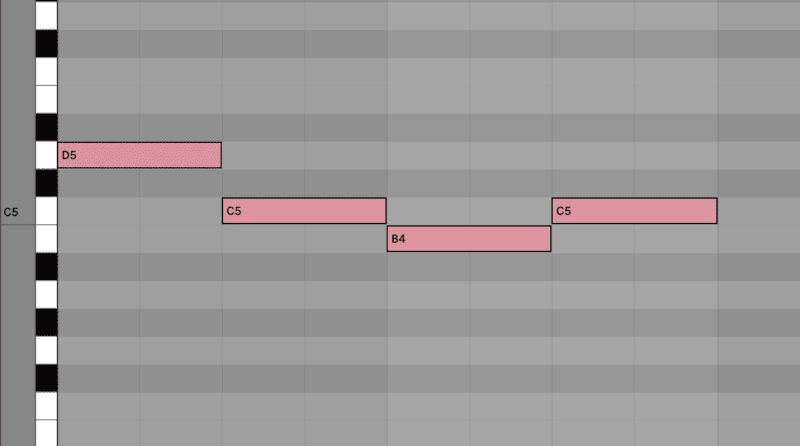 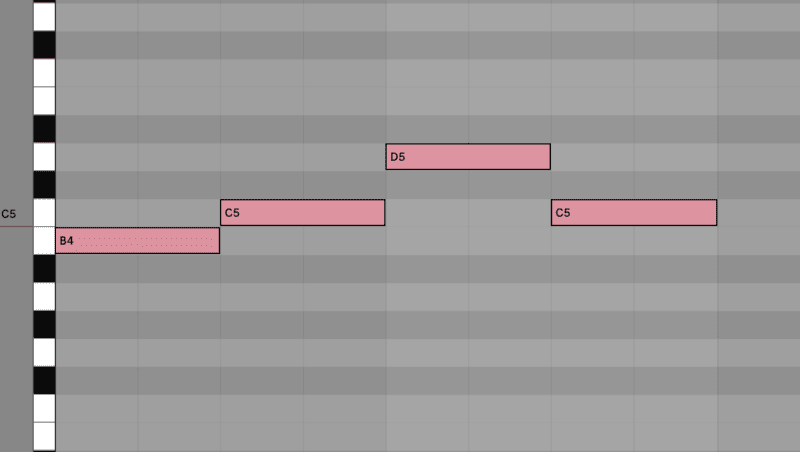 The mordent, like the turn, has two different forms.

Mordents are also shaped according to the contour of the ornament they symbolize. The lower mordent is a broken line indicating the momentary movement downwards and returns upwards, and the upper mordent looks the same but with a single line bisecting it (again, similar to the turn and the inverted turn).

The quick alternation that is the hallmark of mordent ornaments the beginning of the note, thus leaving the main note to sound for the remainder of the note.

The speed and character of the mordent are determined, as with all the other ornaments, fairly imprecisely.

The time period and location in which the piece of music originates sets something of a boundary within which the player has the freedom to choose how they will bring the ornament to life.

Mordents have changed conventionally over time, as the only type of mordent referred to as a mordent in Baroque music was the lower mordent.

What we know today as an upper mordent was referred to as a pralltriller or a schneller.

While the contemporary performance of mordents is as outlined in the previous paragraph, they were sometimes played as more than one alternation during the Baroque era, making them sound something like an inverted trill. Different variations on the mordent are also symbolized with additions to the notational symbol.

Below are examples of how the typical lower and upper mordents look in written sheet music as well as interpretations of how they would appear in a MIDI roll.

The trill is essentially a drawn-out upper mordent. The main note alternates with the upper neighbor, the auxiliary note, throughout the written duration of the note.

It is widely understood to be the most popular ornament of Baroque music. There were several acceptable ways of performing the trill, each offering different treatments of rhythm, approaches to/from the auxiliary and main notes, and conclusion of the trill.

The typical approach to the Baroque trill takes place around a cadence. The performer will initiate the trilled note on the auxiliary note, which creates a suspension that hints at a resolution. Finally, it lands on the main note towards the end of the note’s duration.

The timing of the trill’s conclusion and the rapidity of the alternation depends on the context, as with all of the other ornaments, but these factors play a major role in the amount of tension performers are able to build and resolve through the use of trills.

Below are examples of how the trill looks in written sheet music and one possible interpretation of the trill as it would appear in a MIDI roll.

Ornaments reached their crescendo in the Baroque era because of the aesthetic of the time. Flourishes and embellishments were a part of every aspect of elite artistic life at the time in Western Europe.

The architectural vestiges of that era that stand to this day are every bit as heavily adorned as the music that has survived to the present day.

Though composers of contemporary works are less likely to ask musicians to play ornaments from the Baroque and Classical eras in a line of melody from the present day, many of the conventions that governed the successful implementation of ornaments are still at work in subtle ways in contemporary music.

To a listener well-versed in the grammars of two different sets of musical conventions, the feeling of tension and release associated with each of these musical moments will be almost indiscernible.

The question of when and how to use ornaments in music changes as musical styles change. While Baroque music was popular in Western Europe from 1650 to 1750, tastes change much more quickly in the present day.

So much has happened in music even since 2015. What passed for decorative a decade ago might make an audience cringe today.

That said, there is a massive market for repurposing the popular-turned-unpopular back to popular again as vintage.

Abstracting a well-worn musical element from its original context and finding a new place for it can have a revitalizing effect and lead to new musical ideas.

This is to say nothing of embellishments, like grace notes, that never went out of style. Pop divas have never had a problem finding notes that could use a little more emphasis and sprinkling in some grace notes to heighten the moment.

The improvisational nature of this practice is much like the performance practices of the Baroque era, yet right in line with the tastes of contemporary audiences.

Whatever your genre, there is a lesson to be learned from the countless home makeover, cooking, and baking shows on television: embellishments, when implemented judiciously, can go a long way towards making a piece more appealing.

So the next time you’re working to bring a musical line to life, consider adding some grace notes, mordents, turns, or trills, and hear what sort of an effect it has on your music.

(Species counterpoint is another practice from a similar time, and is still useful today for songwriting. To learn more, check out our post What is Species Counterpoint in Music?)