7 Best Waves Plugins for Mixing Vocals Like A Pro 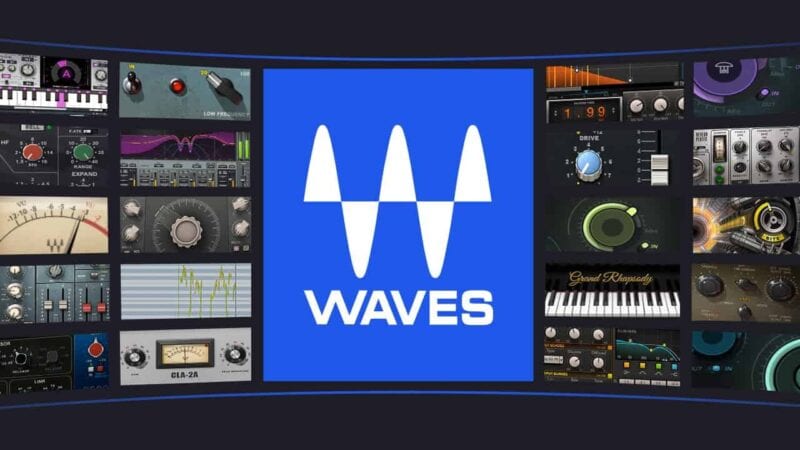 It’s no secret that there are lots of plugins on the market for treating and mixing vocals. EQs, compressors, reverbs, delays, the list goes on! While many companies have been making plugins for ages, no company has been in the game for as long as Waves.

In fact, Waves produced the very first commercially available plugin in the audio industry way back in 1992!

Waves have made a bucket load of plugins in the decades since then. So in order to help you find out which plugins are the best for vocal processing, I’ve compiled a list of my favorite Waves plugins that I use for this task.

In no particular order, they are: 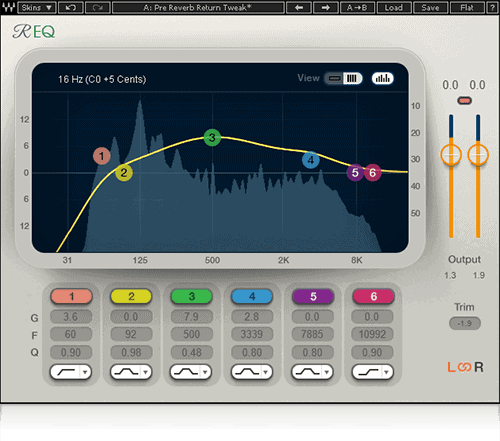 With its modern, updated GUI, brand-new real-time analyzer (RTA), and extended internal headroom, Renaissance Equalizer is one of the warmest, most versatile, most user-friendly EQs you will find.

The Renaissance EQ is one of the older Waves plugins, but it’s been a staple in a lot of mixes, and with good reason.

This EQ plugin is a very straightforward parametric EQ, which is great for surgical EQ moves. It features six bands which you can assign to be either a shelf, band, or a filter. You also get a fully adjustable Q control that basically determines the width of the frequency band.

Since it’s a digital EQ that doesn’t model any analog hardware it’s absolutely great for surgical moves that don’t do anything drastic to the vocal’s character.

I mainly use the Renaissance EQ when I want to take some specific frequencies out of the vocal. I will generally set the Q fairly high, which will give me a narrow EQ-band. This allows me to get rid of the frequencies I don’t like, without affecting the rest of the sound in a negative way. 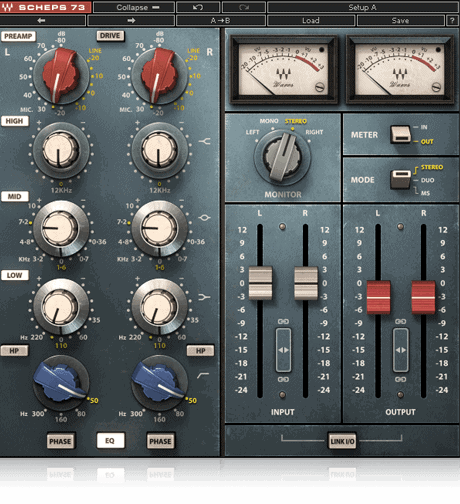 Empowered by Waves cutting-edge technologies, the Scheps 73 EQ features interrelated bands that adhere to the 1073’s original specs and precisely emulate its behavior.

The 1073 is a mic preamp and equalizer, famous for its very musical sounding EQ section and the lovely warm saturation courtesy of the preamp’s transformer.

The EQ section is really simple, with just three frequency bands and a high pass filter you are really forced to use your ears and make decisions based on sound instead of visual input.

You can boost frequencies very aggressively without it sounding painful, which is one of the 1073’s main selling points. Another notable feature is the detailed saturation modeling Waves have done.

One of the things the 1073 is known for is how the transformer colors the sound in a very musical way. With the preamp knob, you can add that Neve saturation to your vocal to give it attitude or to make it cut through a dense mix.

I typically use the 1073 in my analog mixing chain, treating all tracks like I would when I record at a big studio.

This usually involves recording through a Neve console and mixing through an SSL, so I’ll have a Scheps 73 on pretty much every track to get that Neve console feel. When recording on analog hardware I’m usually very conservative with the EQ moves I make as the results are final.

For vocals I often high pass at 80Hz to get rid of unnecessary rumble. I also boost either 110Hz or 220Hz around 1-2dB if I feel like I need more warmth, and I also might give a dark vocal track a slight boost of 1-3dB at 12kHz.

If I’m mixing a rock song and I know that the vocal will need some grit I will also add a slight amount of saturation with the preamp control.

The SSL E-Channel delivers the incomparable sound of the Solid State Logic 4000-series console’s all-discrete design and its Class A, VCA chip. It’s a slice of the world’s greatest hitmaking machine, in your computer.

The SSL E-channel has been my bread and butter Channel strip for at least three years. Boasting four EQ bands, two filters, a compressor, and a gate, it’s all I could ever want in one plugin.

The SSL E-Channel models the iconic SSL 4000E mixing desk. This desk is synonymous with rock and roll since the late seventies.

It’s well known for its aggressive sound, and the incredible range of the EQ section. You often see engineers boosting high frequencies by 8dB or more.

Usually when boosting that amount on digital EQ things will start to sound harsh and painful, but the SSL E-channel sounds very musical when used that way.

The compressor section of the E-channel is also fantastic. It’s a very direct, yet warm-sounding compressor which is great for vocals that need punch and clarity. The gate section also works like a charm.

I often use this as my main source of character for my vocals. After I run the track through Scheps 73 it goes through the SSL E-channel. I boost a few dB around 8kHz to get some air and attitude on the vocals.

I will also remove a few boxy frequencies in the midrange and I’ll do another high pass around 80-100Hz.

Next, I compress 3-6dB with a slow attack, and use a fast release setting to give the vocal some more dynamic consistency.

If I’m feeling really adventurous I might even drive the input of the plugin and bring down the volume on the output. That way I can get the famous SSL saturation without clipping the other plugins in my vocal chain. 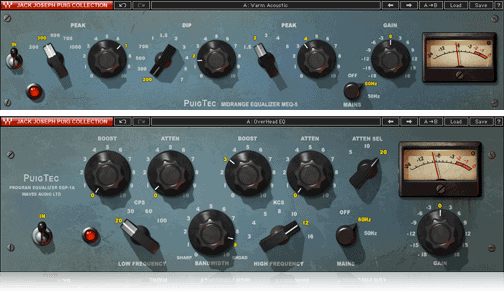 The PuigTec EQP-1A is a remarkable replication of the original hand-crafted unit owned by iconic producer/engineer Jack Joseph Puig (U2, Rolling Stones, Lady Gaga) and heard on dozens of popular recordings by Weezer, Black Crowes, and many more.

Mixing vocals is often described as a very complex process. The vocal is the centerpiece, having to sound full yet clear because you want to hear what the singer is saying.

Therefore a top-end boost is often employed. However, sometimes a big boost in the high end can sound harsh if the EQ plugin has a really aggressive character.

In those cases, I grab the Puigtec EQ. Based on the world-renowned Pultec passive equalizer, this EQ is known for its silky smooth high, and low bands. You can boost very aggressively, whilst remaining very warm and pleasant to the ear.

I often use this plugin after my first stage of compression as I typically find that after using a compressor there’s a low-end buildup. This is where the Puigtec comes in.

I usually set the low-frequency band to 100Hz and cut around 2-3 dB. This frees up some headroom, which will make the second stage of compression sound less muddy.

I also use that same instance of the Puigtec to boost the high end to improve the overall clarity of the voice.

Inspired by two highly desirable revisions of the famed mid-60s Class A line level limiting amplifier, both versions of the CLA-76 (“Blacky” and “Bluey”) offer the superfast attack (as quick as 50 microseconds!) that made the originals studio legends.

I decided to put these two plugins under the same entry because to me they are an engineer’s bread and butter when it comes to vocal compression.

The thing about vocals is that they are all over the place when it comes to dynamics. Vocal recordings often have some big peaks which makes it hard to find one static volume level for them to sit at.

Enter the CLA-76. This plugin models the famous 1176 hardware compressor. This compressor is known for being incredibly fast. Its attack time is as quick as 70 nanoseconds, which makes it perfect for taming the sharp peaks you often find in vocals.

After taking care of the peaks I often grab a compressor with a less aggressive character and place this next in the chain. This will make sure that the vocal will sound more constant in volume.

The CLA-2A is great for exactly that. Based on the famous Teletronix LA-2A optical compressor, the CLA-2A is known for its slower attack and release time.

This is great for doing more broad strokes with compression to even out inconsistencies in volume instead of the laser-precise nature of the CLA-76.

Modeled on the legendary electro-optical tube compressor, the CLA-2A emulates the original’s smooth, frequency-dependent behaviors that have made it a favorite of engineers everywhere.

H-Reverb is a pioneering FIR reverb based on innovative Finite Impulse Response reverberation technology, providing richer, deeper reverb tails that sit beautifully in the mix while breathing crisp air into your tracks.

H-Reverb is a digital reverb with an absolute boatload of features.

It boasts Waves’ Finite Impulse Response (FIR) engine, which allows you to change the reverb’s behavior in quite a unique way. You can dial in gated reverb, reverse reverb or even analog sounding reverbs with all the controls on offer.

I like using this plugin for my vocals when I want a natural-sounding reverb that doesn’t interfere with the mix.

Another reason I use it on vocals is that it has some emulations of classic digital hardware reverbs such as the Lexicon 480. Many of these emulations are based on timeless units with a familiar sound as they have been used on so many records.

From real old school PCM42-style effects like filtering, flanging, and phasing, to slap-back echo, ping-pong delay, and tempo-sync with modulation, H-Delay delivers the goods, controlled by a super intuitive interface that lets you get right down to business.

The Waves H-Delay is used on a very large number of productions, and with good reason. It has a really simple user interface, which makes it very easy to dial in a useable delay setting.

It is also very versatile when it comes to tonal character. H-Delay can be a very neutral sounding digital delay, but it also has an analog knob that emulates 4 different analog delay types.

You also get a high and low pass, which is essential if you don’t want your delay to get in the way of the dry vocal. It’s also got a tempo sync option, which allows you to do some creative long delays that line up nicely with the BPM of your song. To this extent, you could also use H-Delay like a loop pedal.

All in all, I would be happy to use only this delay plugin when mixing vocals as it really has everything I need in a delay plugin and more.

Picking the absolute best Waves plugins for this list wasn’t easy. Especially in sound engineering, because of course, everything is subjective.

I really like effects that add analog color to my vocals, so I’m more inclined to opt for that style of plugin. However, others might prefer more transparent digital plugins for their vocal chain. So what sounds great to me might only be mildly exciting for others, and vice versa.

Therefore, I encourage you to not only explore the options on this list but also to dig into other Waves plugins that strike your fancy. All of them have fully functional demos so you can try before you buy, and if that’s not enough there are plenty of YouTube videos with further demonstrations.

But if you’re still hungry for more vocal plugins, we’ve got you covered with these roundups:

Also for something a little different, check out our review of the Polyverse Everything Bundle & Softube’s Console One.