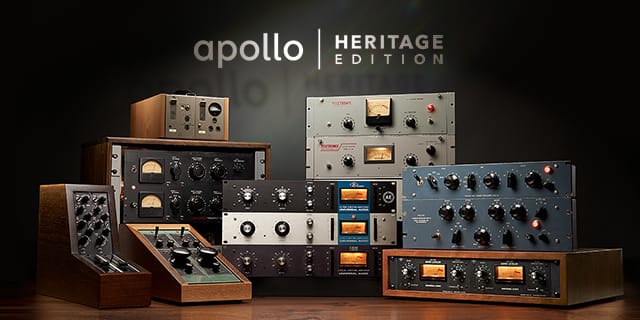 UAD Apollo X4 Heritage Edition Review (Worth It?)
VERDICT
To state it in simple terms, the Apollo X4 Heritage Edition gives you a massive amount of features and quality in a single package. If you're after studio-quality results in your home and project studio, this is the interface for you!
Features
9
Sound
10
Software
10
PROS
Allows you to record at an extremely high standard
Includes a staggering amount of quality features
The UAD Powered plug-in library offers some of the best and most accurate emulations of analog audio equipment
CONS
Not cheap, but justifies its price tag in performance and features
You must have a Thunderbolt port on your computer
9.7
OUR SCORE
Check Price
Sweetwater

The UAD Apollo X4 is an audio interface designed especially for project studios. It comes with all the quality features that only a company with the tradition and reputation of Universal Audio can offer.

Besides offering superior sound, fantastic AD/DA conversion and sample rate, I/O options, and other standout features, the Apollo X4 Heritage Edition also comes bundled with some of the best sounding plug-ins in history – and a processor that’s powerful enough to handle them all.

These plugins emulate the sound of legendary analog gear from many distinguished brands with impressive detail and accuracy.

To state it in simple terms, the Apollo X4 Heritage Edition is a standout choice for so many reasons and has a stellar cost-benefit ratio.

It is ideal for your home or project studio as it does not take up much space, yet allows you to get high quality digital recordings. But for many, the most attractive aspect of the Apollo X4 Heritage Edition (and of all modern UA interfaces) is that you get access to their incredible UAD plug-in collections. 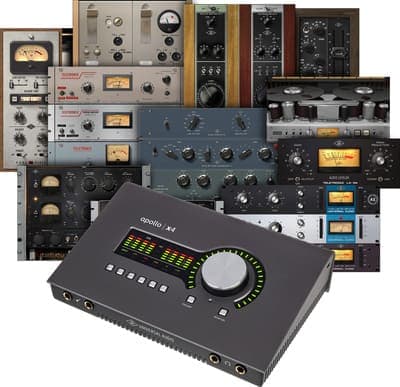 The Apollo x4 Heritage Edition comes with a premium suite of 10 award-winning plug-ins, along with the Realtime Analog Classics Plus bundle, arming you with accurate emulations of vintage analog hardware.

To say that the UAD Apollo X4 Heritage Edition interface is loaded with features may be quite an understatement. That is because the level of quality and amount of features you get in this interface is simply staggering.

Just the included UAD Powered plug-ins alone are worth the price of admission. But I’m leaving software for later, as there is just so much to talk about in that area.

With the hardware, let’s start with arguably the most important components for determining the sound quality of an audio interface – the converters. Apollo X4’s A/D conversion captures audio in 24 bit, 192 kHz quality giving you 127dB of dynamic range, for superior signal quality.

Preamps are the next most important part, and you’ll find the preamps on the Apollo X4 are more than capable of standing in for a dedicated instrument or mic pre. Apollo X4’s four preamps feature Unison technology. This allows you to track using precise preamp emulations of legendary gear from a variety of brands, including Neve, API, Avalon, and Manley.

When you switch between the emulations, the plug-in adjusts the preamp circuit itself, affecting parameters such as analog gain structure and impedance. Unison offers bidirectional communication between Apollo X4’s mic preamp and a Unison-capable plug-in.

In other words, by adjusting the physical controls on your Apollo X4, you are virtually interacting with the chosen modeled preamp.

This is a great addition as you are now able to monitor a recording session while a musician is tracking, or have 2 people listening on headphones at the same time.

All of these I/O capabilities essentially make the Apollo X4 a 12-in/18-out Thunderbolt 3 audio interface.

Naturally, perhaps its most impressive feature is the superior UAD analog emulation plugin collection that transforms the Apollo X4 into a full-blown production station and recording studio thanks to its powerful 4-core QUAD Core processor. In other words, your computer’s CPU won’t be burdened with all that processing, as it is handled by the UAD platform.

This processor enables you to track in real-time with sub-2 ms latency, all while using models of the same legendary rack gear that has appeared in countless recordings.

Additionally, the Apollo X4 features a Thunderbolt 3 protocol for blazing-fast connectivity, lower latency, and greater stability than USB or FireWire.

The Apollo X4 also excels on sound, and that applies to everything from its converters to its plugin emulations.

This interface features great AD/DA technology, pairing elite-class 24-bit/192 kHz converters with overhauled analog circuitry. As a result, you get an ultra-pristine signal path with 127 dB of dynamic range. This gives people with home recording setups pro studio quality results at a fraction of the cost.

Recordings captured with the Apollo X4 simply sound fantastic – clean yet rich. You will sleep well at night knowing all your songs are being recorded in pristine quality with UADs cutting-edge technology.

The preamps also sound exceptional, with no noticeable noise creeping in even with heavy gain boosts. This means your stubborn dynamic mics can be cleanly boosted with no loss in quality.

I’m also counting the sound quality of the plugins included here in this category. There’s really nothing quite like UAD’s expert emulations. Sure, they are resource intensive, but the interface handles this for you so there is nothing to worry about!

So just how good are the emulations for these legendary pieces of gear? Well, the consensus among many audio professionals is that very trained ears may be able to tell the original hardware from the plugin in an isolated track, but it is nearly impossible to tell them apart in a mix.

This is a massive feat, as you can incorporate legendary sounds in your mix with authenticity. This allows you to work with tools that are not only iconic and very useful, but also quite expensive in their original hardware form.

Not to mention, you would need much more than just “desktop space” to stack the analog gear that the UAD plug-ins accurately emulate.

As the plug-ins are performing many complex calculations in order to emulate hardware, you need to devote a massive amount of CPU resources to processing…right?

The good news is the UAD platform offers astonishing processing power that effectively frees your computer from the heavy work. So you not only get all the tools you need but also the processing power to handle them. Impressive!

In case you want to “print” your results as you record, with the Apollo X4, you can run your audio through these UAD plug-ins in real-time with sub 2 ms latency.

Why am I making such a big deal about the software included in the Apollo X4? Because it is a big deal!

One of the most appealing aspects of having a Universal Audio interface is that you have immediate access to the UAD Powered plug-ins that these interfaces were made to work seamlessly with.

This would have been impossible just a few years back, as you’d basically have to be rich to be able to afford all these hardware tools, not to mention the space and power required to process them.

The Apollo X4 Heritage Edition includes an impressive array of emulations. First up, you get spot-on recreations of the legendary UA 1176 family of compressors with three unique versions: Rev A, Rev E, and AE.

You also get the iconic Teletronix LA2A Classic Leveler Collection of limiters with three historic versions of the highly sought-after electro-optical tube compressor / limiter. An emulation of the LA-3A is also included.

Next up is the Pultec Passive EQ Collection with three coveted revisions in the Pultec product line. There’s also an emulation of the Fairchild Tube Limiter Collection which includes the Fairchild 660 and 670 based on accurate circuit models of Ocean Way Studios’ “golden-reference” units.

You also get the Helios Type 69 Preamp and EQ Collection from the console used in albums by Jimi Hendrix, Led Zeppelin, Bob Marley, The Beatles, Pink Floyd, David Bowie, Black Sabbath, and AC/DC.

Add to that a V76 Preamplifier microphone preamp, the same found in Decca and EMI’s custom Abbey Road consoles.

To top it off, you also get the UA Oxide Tape Recorder (that reproduces UA’s historic tape emulation technology) and a UA Pure Plate Reverb.

This collection is truly impressive, for its top-notch quality of emulations and variety of choices. The Heritage Edition software package gives you unmatched choices and quality that surpasses what any other interface at this price range can offer.

Besides all of the plug-ins mentioned in the Heritage Edition above, which are nothing short of impressive, you also get the Realtime Analog Classic Plus bundle with your Apollo X4 interface. This plug-in bundle includes the following:

The Realtime Analog Classics Plus plugin bundle is another fantastic tool that can truly help you shape your mixes.

If you are a guitar player (or work with one), this plug-in bundle also offers you emulations of iconic amps, including the Marshall Plexi, a favored amp used by Jimi Hendrix, Eric Clapton, and Pete Townshend. 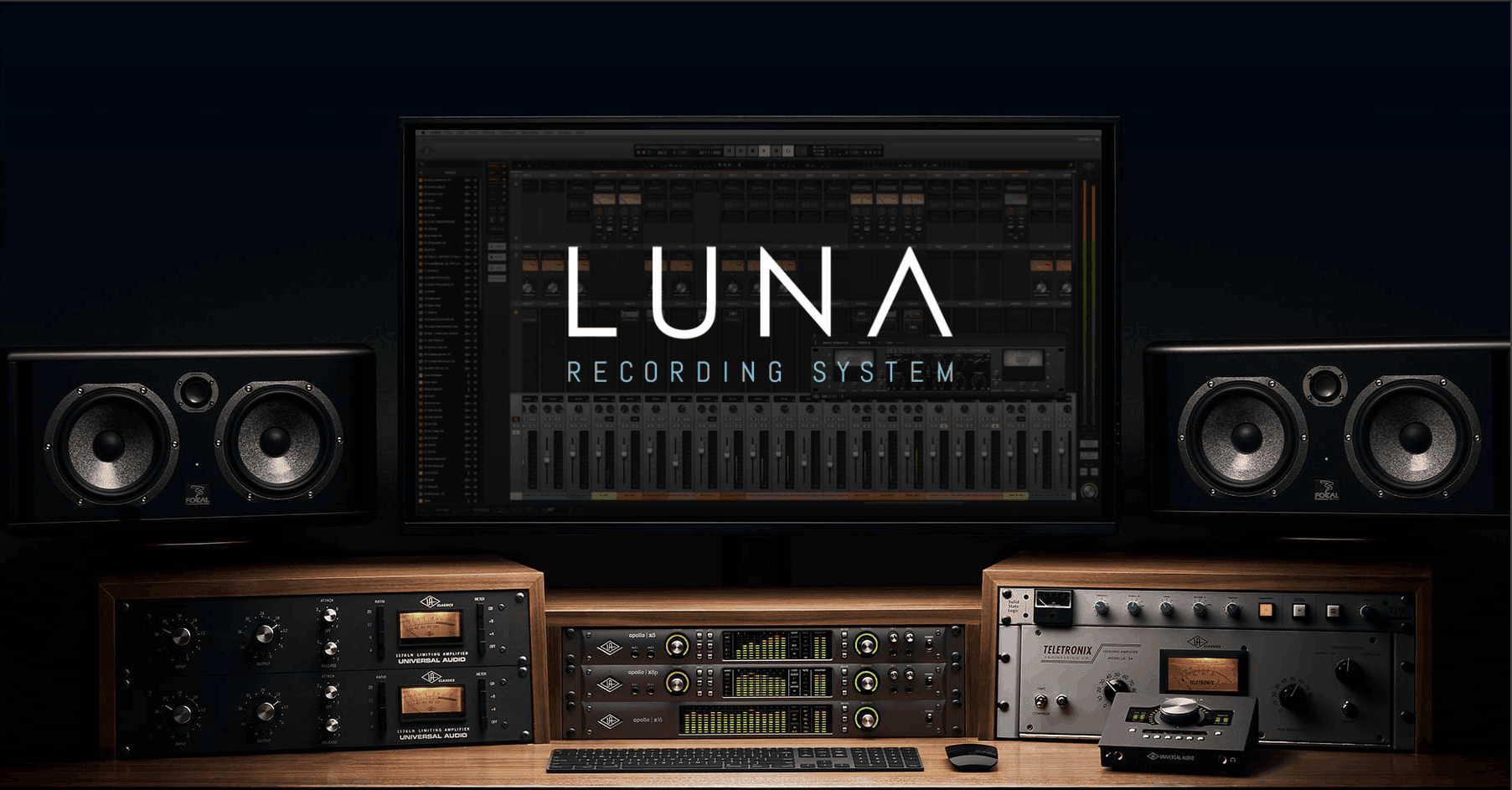 LUNA is Universal Audio’s free DAW software that allows you to track, edit and mix. Naturally, all Universal Audio interfaces are compatible with the LUNA software and offer tight hardware/software integration.

LUNA features what UA calls Accelerated Real-time Monitoring. This supplies fast analog-style tracking and overdubbing through the use of the onboard DSP acceleration in your Apollo interface.

Naturally, since this is all in the UA environment you don’t need to instantiate your plugins after you install them as extensions of LUNA.

Although LUNA might appeal to some that are just starting out, chances are most folks will stay with their tried and true software DAW.

One of the drawbacks of LUNA is that it is currently not an industry-standard software DAW like ProTools, Logic, and even Ableton Live. This makes it hard to work with other engineers and producers that most likely have either ProTools or Logic.

Another significant drawback for the LUNA software is that it is Mac only. Naturally, that will turn a lot of folks off, and will severely limit who can use it. Additionally, LUNA requires a Thunderbolt-equipped Apollo or Arrow interface.

The Apollo x4 Heritage Edition comes with a premium suite of 10 award-winning plug-ins, along with the Realtime Analog Classics Plus bundle, arming you with accurate emulations of vintage analog hardware.

The Apollo X4 is a small desktop interface with superior conversion and preamps, versatile I/O, and access to a world of sounds and possibilities thanks to the UAD Powered plug-ins ecosystem. The Heritage Edition features not only great sounding emulations of legendary gear but also the processing power to handle it.

In other words, this is one of the very best options for recording on the market today!

Finally, in case you are deciding between UA interfaces, we’ve got a comparison between the Apollo Twin and the Arrow here.